The wisdom of crowds: Free agency's winners according to Best Ball ADP

The first two weeks are almost up for free agency, and our own Jeff Ratcliffe has his opinions on the biggest fantasy football winners and losers. While Ratcliffe’s article is a comprehensive look from a qualified expert, we also have resources to assess free agency’s impact on players according to hundreds of best ball fantasy football drafters.

I took average draft position info from bestball10s.com from before and after the free agency period began and calculated who the biggest movers were at the running back, wide receiver and quarterback positions. In this article, I’m going to focus on players whose ADPs have risen the most relative to the starting point, and I will follow up with another piece tomorrow that looks at the fallers. 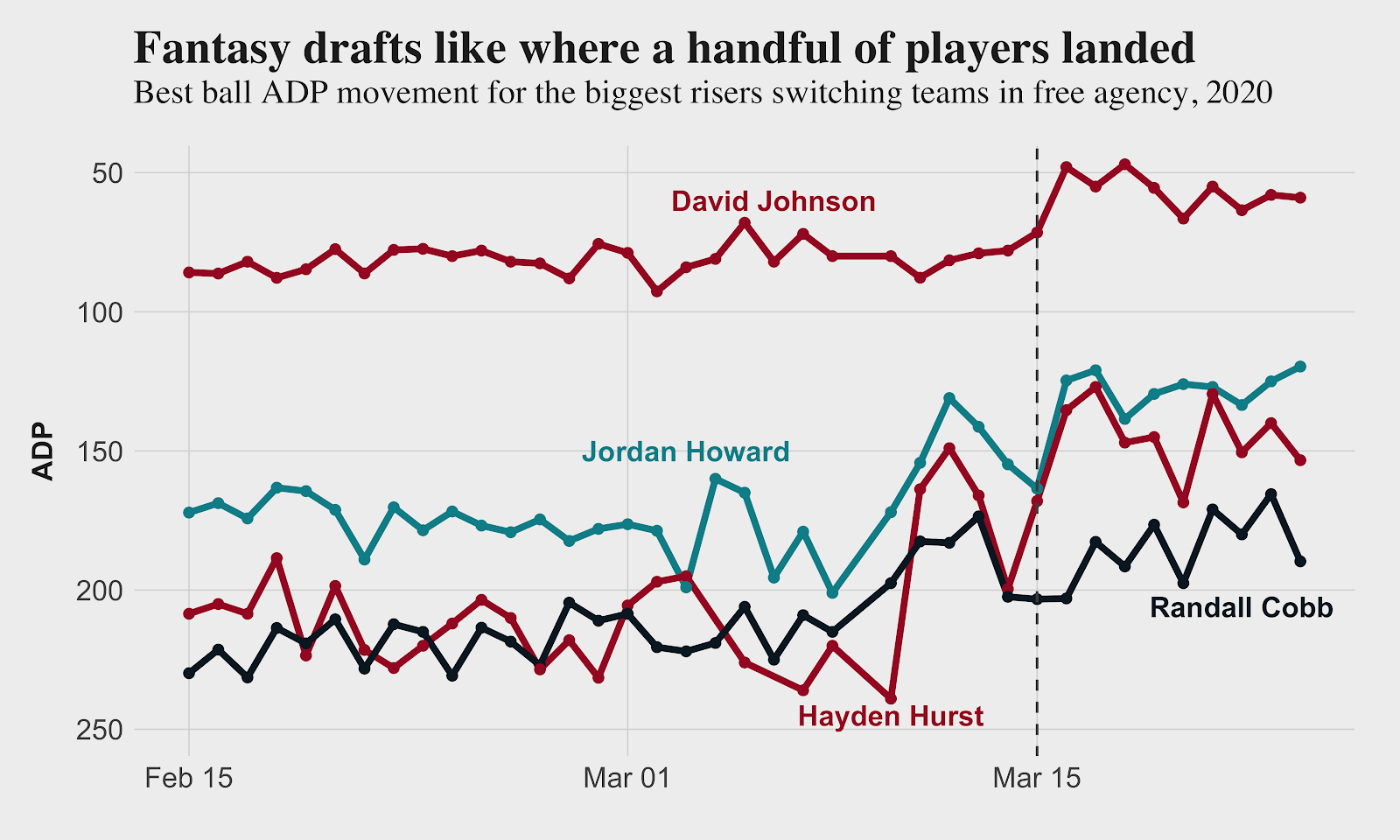 The players above were the biggest risers during free agency, benefiting from landing in less-crowded or more fruitful offenses. David Johnson was the other side of the Arizona Cardinals landing DeAndre Hopkins, and his ADP has risen significantly after the trade was announced. Johnson will join Duke Johnson Jr. in the Houston Texans’ backfield, filling a role that Carlos Hyde thrived in last season.

Jordan Howard was scooped up by the Miami Dolphins and will have tons of opportunity alongside marginal running backs like Kalen Ballage and Myles Gaskin. The Dolphins’ offense won’t likely be dynamic, but volume should be there for Howard.

Hayden Hurst was traded to the Atlanta Falcons and will fill a role that made Austin Hooper the sixth-highest fantasy scoring tight end last season. Randall Cobb wasn’t a great producer with the Dallas Cowboys last season, but the Hopkins-less Texans will need someone to attract targets from Deshaun Watson.

Here are all the numbers for the other risers (or no movement) who switched teams this offseason.

These are the players with the highest percentage gain in ADP who haven’t changed teams. Kenyan Drake’s ADP rise is the flip side of the David Johnson trade, as the Cardinals showed faith in Drake by applying the transition tag and letting Johnson go elsewhere. Mark Andrews’ rise is a similar circumstance, as he'll be benefitting from Hayden Hurst’s absence.

Will Fuller V will have opportunity with DeAndre Hopkins leaving, but health and role remain questions. Darrell Henderson is, by far, the biggest riser from free agency, though he's come from a low base. It wouldn’t be surprising if Henderson continued to rise throughout the offseason as it becomes more obvious he’ll be the leader in a fruitful backfield.

Here are all the numbers for the other top risers who remained on the same teams this offseason.