It’s Wednesday, and that means it’s time to break out the flex fantasy football rankings for Week 3 of the NFL season. Remember that rankings change throughout the week, so be sure to check our staff rankings for updates. 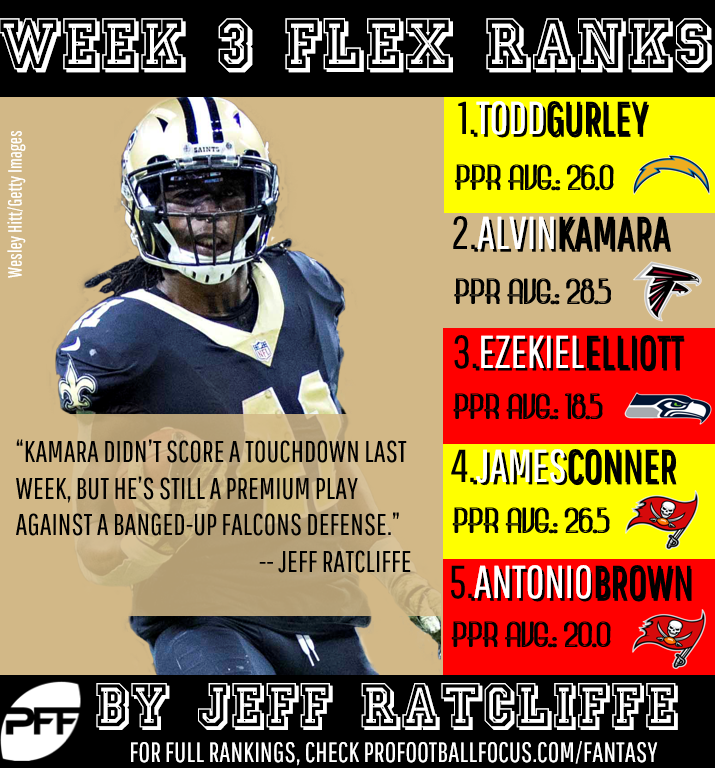 1. Todd Gurley, LAR vs LAC (RB1) — He hasn't faced base defense on any of his carries this season, which means Gurley has a constant advantage. He's also pretty darn good at finding the end zone.

3. Ezekiel Elliott, DAL @ SEA (RB3) — Opposing defenses know Elliott is going to get the ball, but he's still doing a rock-solid job of putting fantasy points on the board.

5. Antonio Brown, PIT @ TB (WR1) — He missed team meetings on Monday, so keep an eye on Brown's status this week.

6. Melvin Gordon, LAC @ LAR (RB5) — This is a much tougher matchup for Gordon, but he remains a strong RB1 who figures to see heavy volume.

7. Kareem Hunt, KC vs SF (RB6) — With the Chiefs offense clicking, Hunt will continue to put up strong stat lines.

8. David Johnson, ARI vs CHI (RB7) — The Cardinals have struggled out of the gate, but you didn't draft Johnson in the first round to bench him.

9. Saquon Barkley, NYG @ HOU (RB8) — Despite struggling on the ground, Barkley was still a beast last week thanks to a whopping 14 catches.

11. Julio Jones, ATL vs NO (WR2) — He's coming off a down week, but Jones should see plenty of volume and have a positive game script in this one.

12. Michael Thomas, NO @ ATL (WR3) — He's the No. 1 fantasy wide receiver with a massive 28 catches through the first two weeks of the season.

13. DeAndre Hopkins, HOU vs NYG (WR4) — The Texans' passing game looked much better in Week 2. Look for Hopkins to get big this week.

14. Tyreek Hill, KC vs SF (WR5) — With Patrick Mahomes under center, Hill can blow up in any given week.

15. Tevin Coleman, ATL vs NO (RB10) — Coleman averages 20 touches in games where Devonta Freeman has been out over the last two seasons.