It’s Wednesday and that means it’s time to start making your start and sit decisions for your fantasy football lineups. One of the best resources to help you is our flex fantasy football rankings for Week 14 of the NFL season. Remember that rankings change throughout the week, so be sure to check our staff rankings for updates.

1. Christian McCaffrey, CAR @ CLE (RB1) — This might be the first time all season that Todd Gurley isn't in the No. 1 spot, but McCaffrey has been a monster over the last six games, with 10 touchdowns over that span. 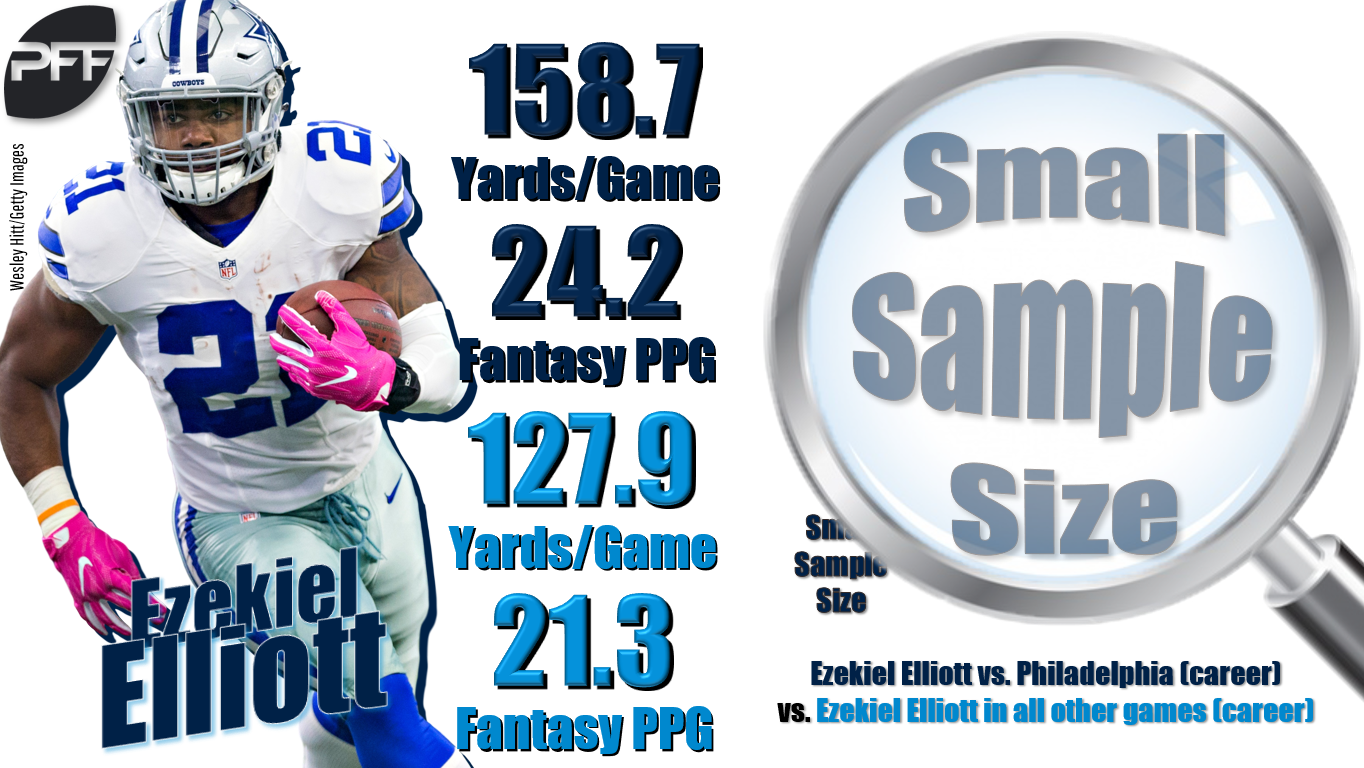 3. Ezekiel Elliott, DAL vs PHI (RB3) — Elliott went off against the Eagles when he faced them a few weeks ago.

4. Alvin Kamara, NO @ TB (RB4) — He was a letdown last week, but Kamara's high ceiling keeps him in borderline elite fantasy territory.

5. Saquon Barkley, NYG @ WAS (RB5) — The rookie is dinged up but should be fine for this week's contest.

6. Aaron Jones, GB vs ATL (RB6) — Will the interim regime use Jones more than Mike McCarthy? We don't know, but this is an excellent matchup.

8. Michael Thomas, NO @ TB (WR1) — The shaky Bucs secondary looked decent last week, but this is still a plus matchup for Thomas.

9. Antonio Brown, PIT @ OAK (WR2) — AB is rolling over the last month with the second-most fantasy points among wideouts over that span.

10. Davante Adams, GB vs ATL (WR3) — Things are spiraling in Green Bay, but it isn't affecting Adams one bit.

11. DeAndre Hopkins, HOU vs IND (WR4) — Indy isn't quite the pushover of a matchup they once were, but Hopkins is still going to get his this week.

12. Keenan Allen, LAC vs CIN (WR5) — He's scored in four straight games and is the No. 1 fantasy wide receiver over the last month.

13. Tyreek Hill, KC vs BAL (WR6) — This is a tough matchup for Hill, but he can post elite fantasy numbers any given week.

14. Adam Thielen, MIN @ SEA (WR7) — Thielen has been banged up over the last several weeks and is coming off a down week. But there's no reason to bench him in the fantasy playoffs.

16. Nick Chubb, CLE vs CAR (RB8) — Expect the heavy volume for Chubb to continue this week.

17. Travis Kelce, KC vs BAL (TE1) — Kelce is coming off an enormous performance last week. He's the top option at tight end despite the tough matchup.

18. David Johnson, ARI vs DET (RB9) — Even with the Cards offense struggling, Johnson is a volume play as a back-end RB1.

19. Austin Ekeler, LAC vs CIN (RB10) — Justin Jackson will get some run in this backfield, but Ekeler will still get the lion's share in a very favorable matchup.

21. Leonard Fournette, JAC @ TEN (RB11) — He's back from suspension and in the backend RB1 conversation this week.

22. Joe Mixon, CIN @ LAC (RB12) — While the Bengals offense is certainly trending down, Mixon is still in play as a fringe RB1 based on his workload.

24. Brandin Cooks, LAR @ CHI (WR11) — Cooks gets a tough matchup, but he's still in play as a top-12 wide receiver option given his high fantasy ceiling.

25. Mike Evans, TB vs NO (WR12) — Evans enters the week third among wide receivers in yards and only Antonio Brown has more touchdowns of 40-plus yards.

26. Emmanuel Sanders, DEN @ SF (WR13) — He was a disappointment last week, but Sanders should see heavy volume in this matchup.

28. Lamar Miller, HOU vs IND (RB13) — Miller is gaining steam down the stretch with strong performances in back-to-back games.

30. Amari Cooper, DAL vs PHI (WR15) — Cooper has been rolling over the last two weeks and gets a tasty matchup in this one. 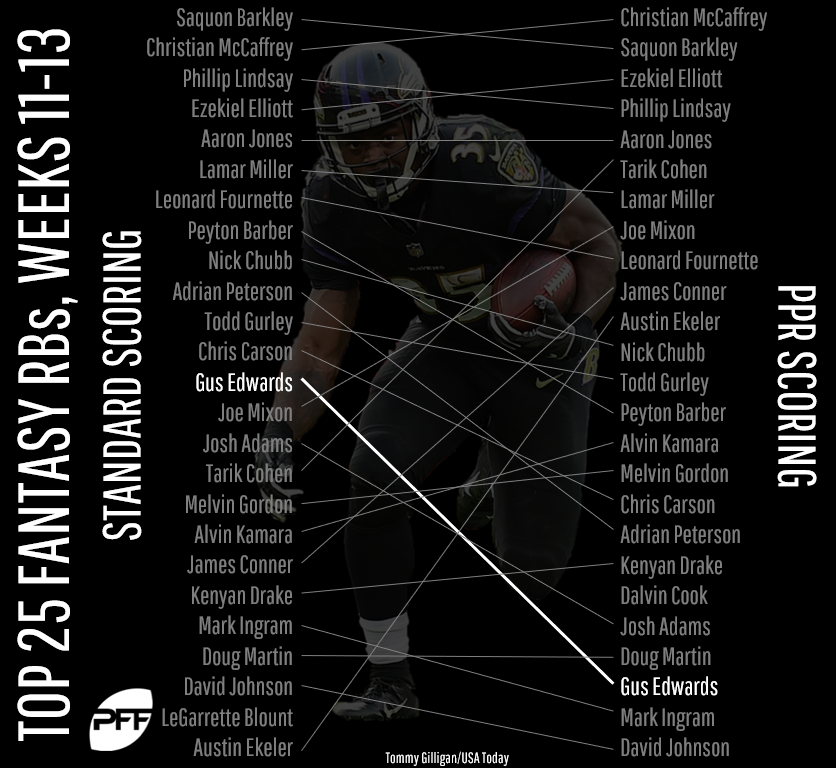 49. Jaylen Samuels, PIT @ OAK (RB24) — Samuels will serve as the lead back, but his role in the offense isn't 100% clear. It's best to enter this week with tempered expectations. 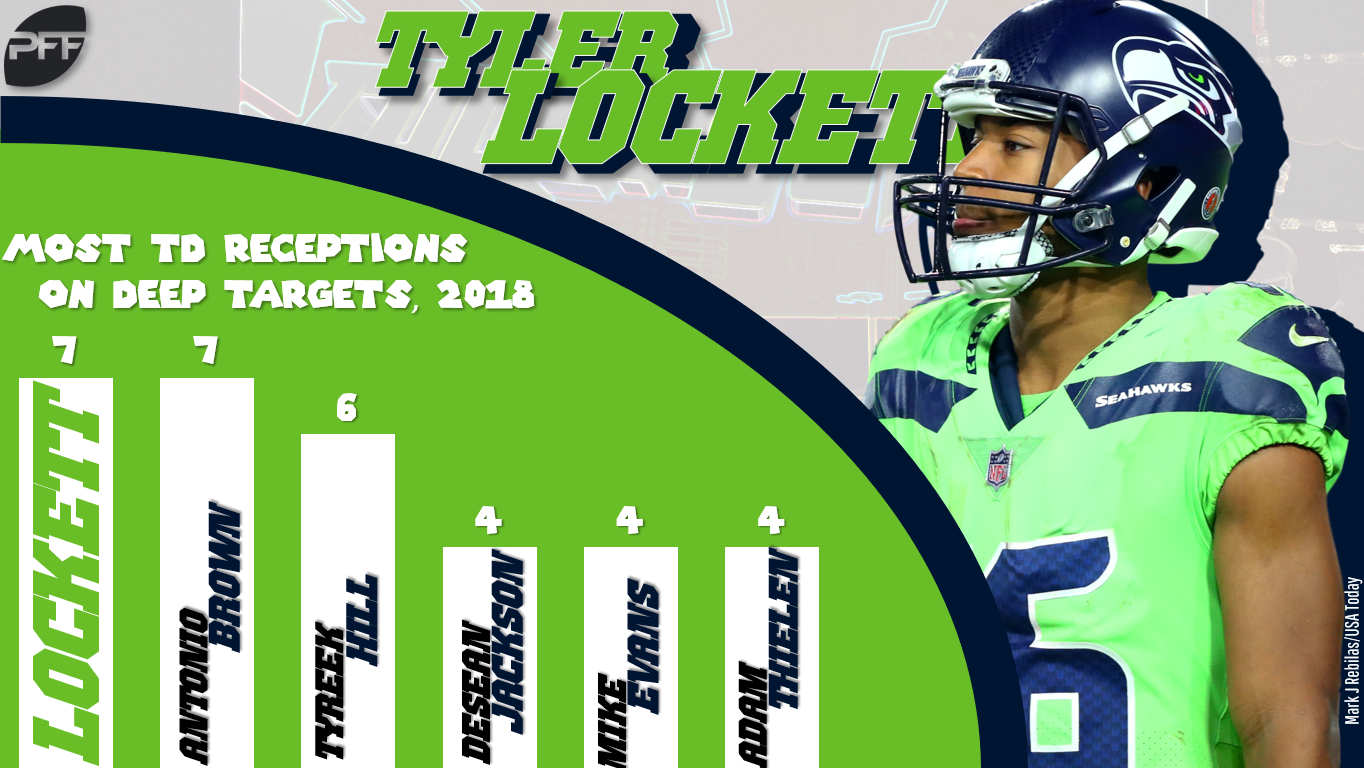 60. Justin Jackson, LAC vs CIN (RB30) — The rookie has impressed over the last two weeks and is a sneaky flex play if Melvin Gordon remains sidelined. 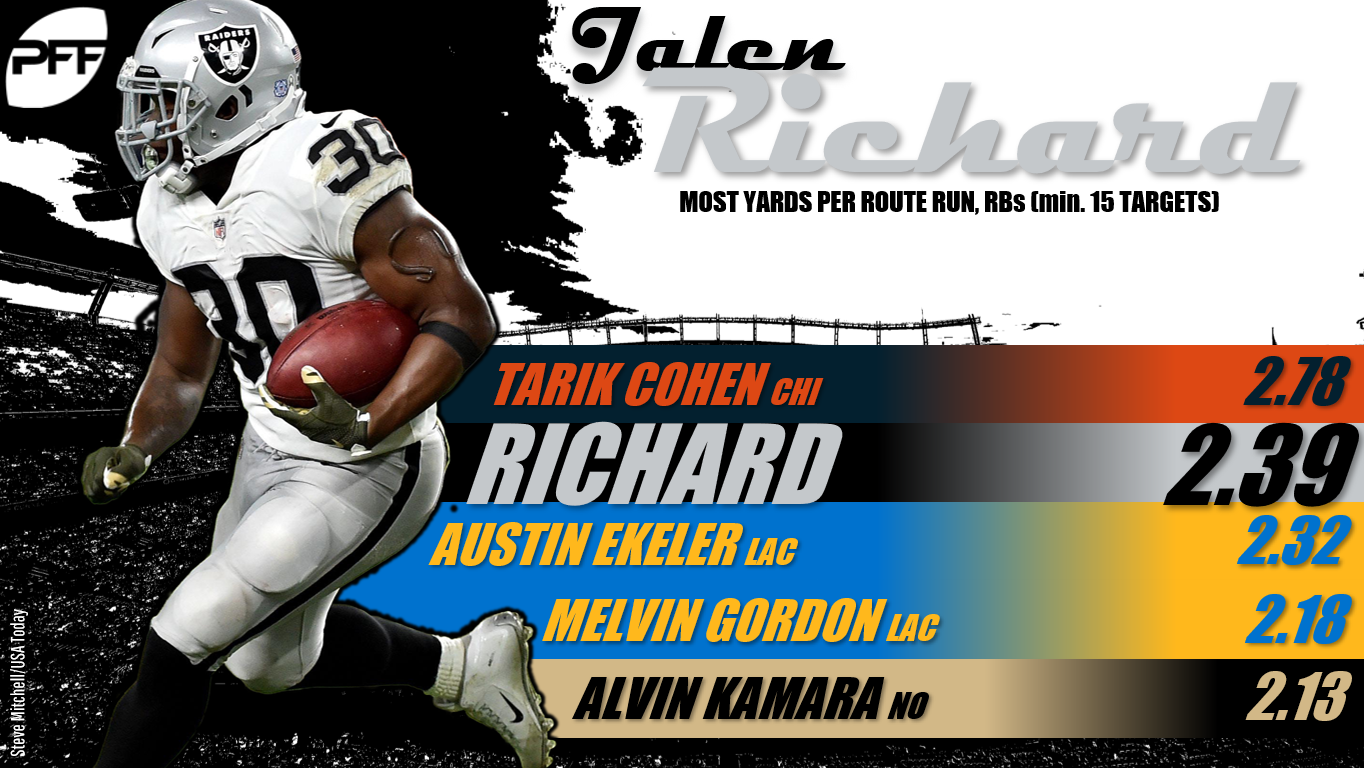 85. Dante Pettis, SF vs DEN (WR39) — The rookie is finally healthy and is trending up for the fantasy playoffs.

92. Josh Reynolds, LAR @ CHI (WR43) — Reynolds may not do much this week, but he still has a very appealing role in the Rams offense. 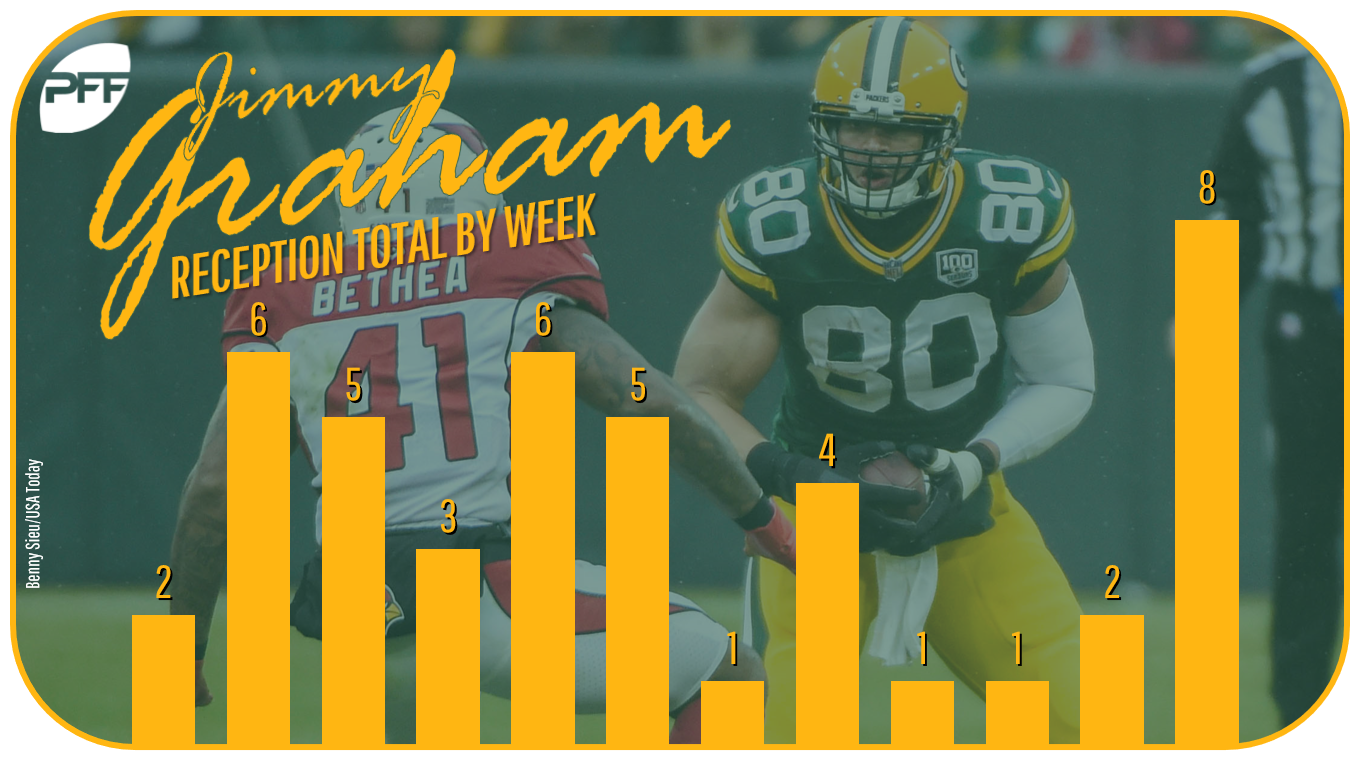 106. Antonio Callaway, CLE vs CAR (WR53) — Callaway comes with a lot of upside, but he's also a very risky play with your playoff life on the line. 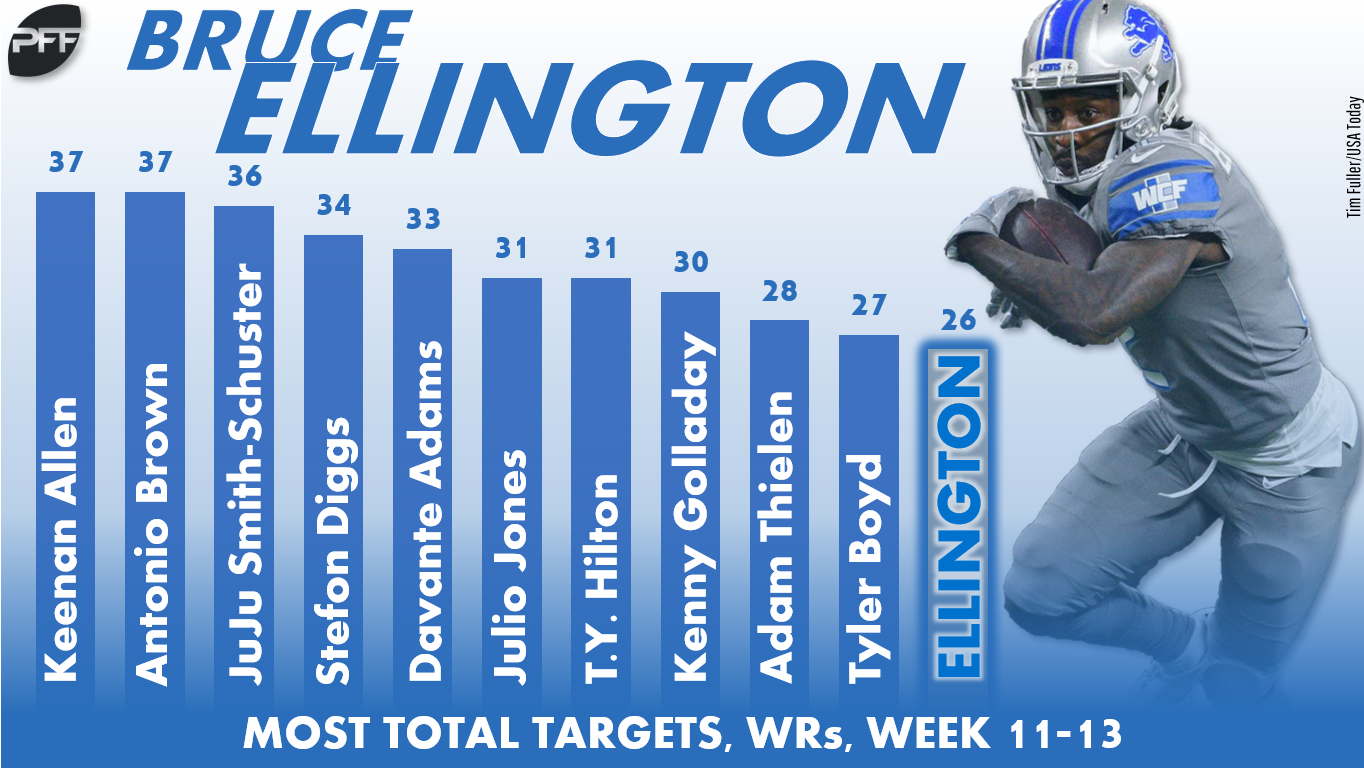