The 2019 NFL Draft is in the books, but the undrafted free agency waters were still chock-full of valuable prospects that teams were quick to jump on this weekend. Below is a list of Pro Football Focus' top-10 undrafted free agent signings following this year's draft. 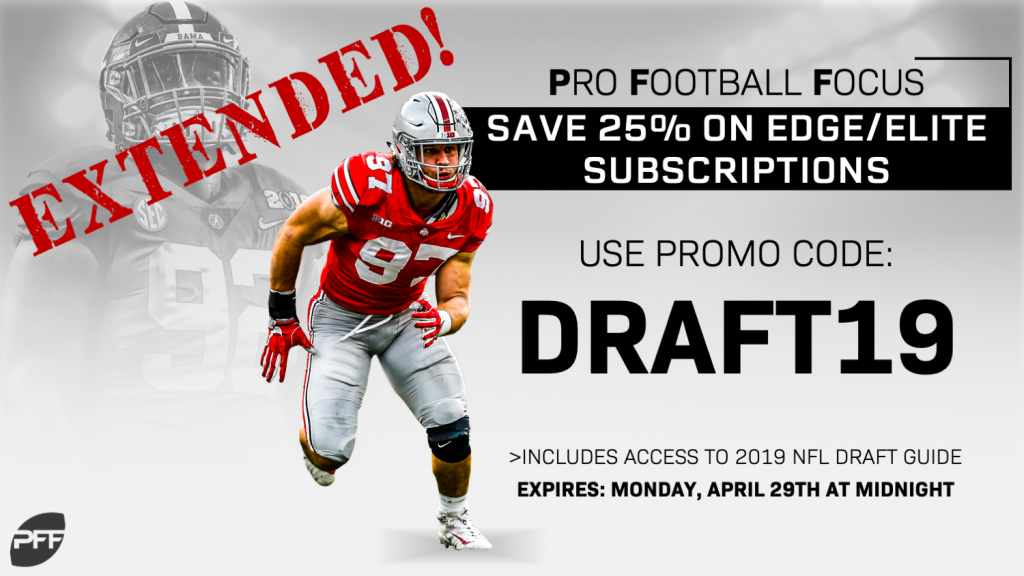 Coney didn’t test well at his Pro Day, running a 4.72s 40-yard dash and putting up underwhelming numbers in the short shuttle (4.45s) and three-cone (7.33s). Athleticism, change of direction, and speed were all concerns heading into the 2019 NFL Draft, and his testing put an exclamation point on such concerns. Coney’s on-field production, however, should have kept him from going undrafted.

In 2018, Coney’s 90.5 coverage grade and 91.7 run-defense grade both ranked inside the top 10 among all linebackers in college football. He also ranked second in the linebacker class in overall grade at 91.8. Oakland did add Vontaze Burfict and Brandon Marshall this offseason, but Coney should do more than compete for a roster spot – he could easily steal playing time away from the team’s current off-ball linebacker rotation early in his NFL career.

This was quite the head-scratcher. Hall, a burner with great top speed and big-play ability, fell into the Bears’ lap as an undrafted free agent on Saturday. His ball skills and sparse route tree are reasons for concern, but he's mightily impressive on the routes that he can run.

Hall finished the 2018 season ranked second in yards per route run (4.14) and fourth in passer rating when targeted (141.8), and he did so with the second-highest average depth of target (20.3) of any draft-eligible FBS wide receiver.

Peavy’s 90.3 overall grade in 2018 ranked fourth in the class at cornerback, and his 86.6 coverage grade ranked 12th. He allowed just 31 receptions from 59 targets for 318 yards, 12 first downs and three touchdowns on the year.

Long speed and overall athleticism are concerns for Peavy, but he can offer value as an aggressive zone corner with good short-area quickness and instincts. 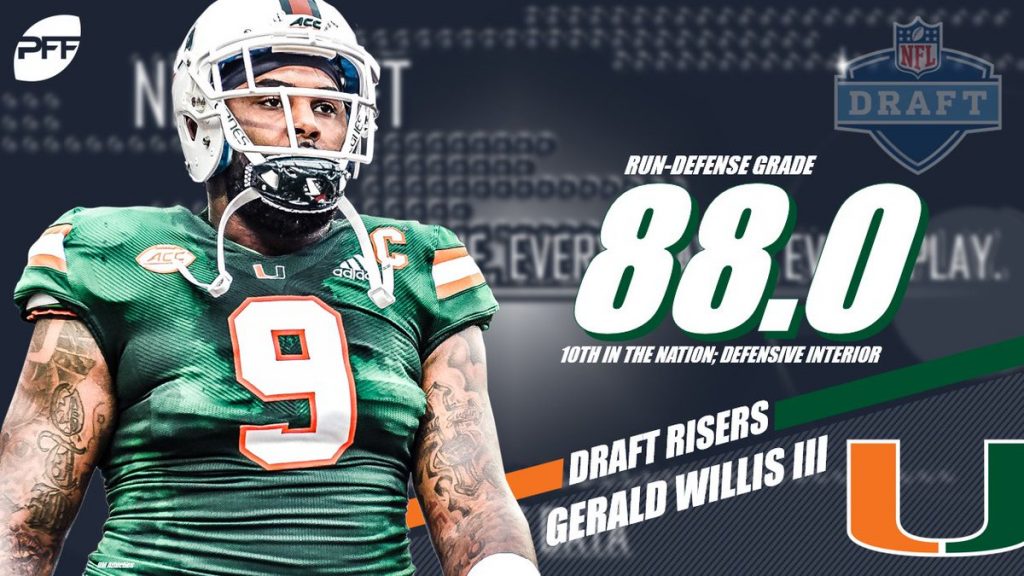 An older prospect entering the draft at 23, Willis still plays with high pad level and can get bodied in the run game as a result. When he does win, however, he wins with enthusiasm early enough in the snap to make splash plays in the backfield.

Willis earned an 88.3 run-defense grade in 2018, ranking tied for 12th in the 2019 draft class. His 85.9 overall grade this past season ranked 13th among qualifiers at his position, as well.

Bates earned an 81.0 overall grade across his 879 offensive snaps split between left and right tackle at Penn State a year ago, but size and power concerns should push him inside to guard in the NFL. His 81.0 overall grade ranked seventh among qualifying tackles in 2018, and his 76.9 run-blocking grade also ranked seventh. Moving Bates to guard in Philly should sew up at least some of his woes in pass protection.

Off-field concerns pushed Williams out of this year’s draft, not his on-field talent or production. In his lone season at Colorado State (2018), Williams earned the 10th-best overall grade (84.0) among draft-eligible FBS wide receivers. He caught 97-of-166 targets for 1,339 yards, 51 first downs, and 14 touchdowns. He’s a big, athletic wide receiver that can win with just his natural ability but will need to add some polish to his game and keep a clean sheet off the field to reach his sky-high potential in the NFL. 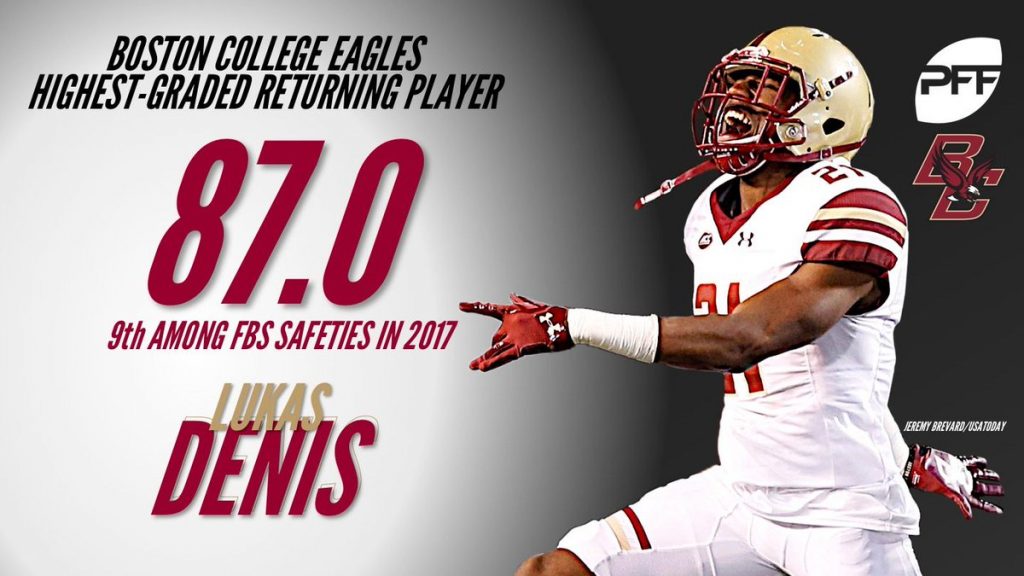 Denis turned in an underwhelming 59.9 overall grade at safety for Boston College a year ago, but his 90.9 overall grade in 2017 gives reason to believe he can turn things around in the NFL. At 5-foot-11, 190 pounds, Denis is extremely small for his position and doesn’t have elite athleticism to make up for it, either. The former wide receiver turned defensive back is still very raw and most likely needs to live in the weight room to see the field in the NFL, but if he can get back to his 2017 form, he’ll be quite the steal for Tampa Bay as an undrafted free agent.

Among off-ball linebackers in the 2019 class with 400-plus defensive snaps played this past season, Edwards ranked fifth in overall grade (90.8) and 12th in coverage grade (84.8). The flaws in his game stem from his burst to the ball and lackluster play recognition. His teammate Ryan Connelly, who went to the Giants in the fifth round of this year’s draft, blew Edwards out of the water in terms of instincts and play recognition – that likely steered many teams away. He’ll need to improve mentally to make up for an average change of direction and burst, but his size and experience should put him in a position to compete for a backup spot early.

A high-cut, powerful back coming out of Nebraska, Ozigbo gained at least two yards after contact or more than 70 percent of his runs and earned an 82.7 overall grade in 2018. He’s a bruiser that keeps his pads square to the line of scrimmage when running through contact, but he lacks the wiggle and burst needed to make the big plays at the next level. In a rotation with the Saints, however, Ozigbo should compete with Latavius Murray for reps as the second complement to Alvin Kamara.