Ranking the interior OL prospects for the 2018 NFL Draft 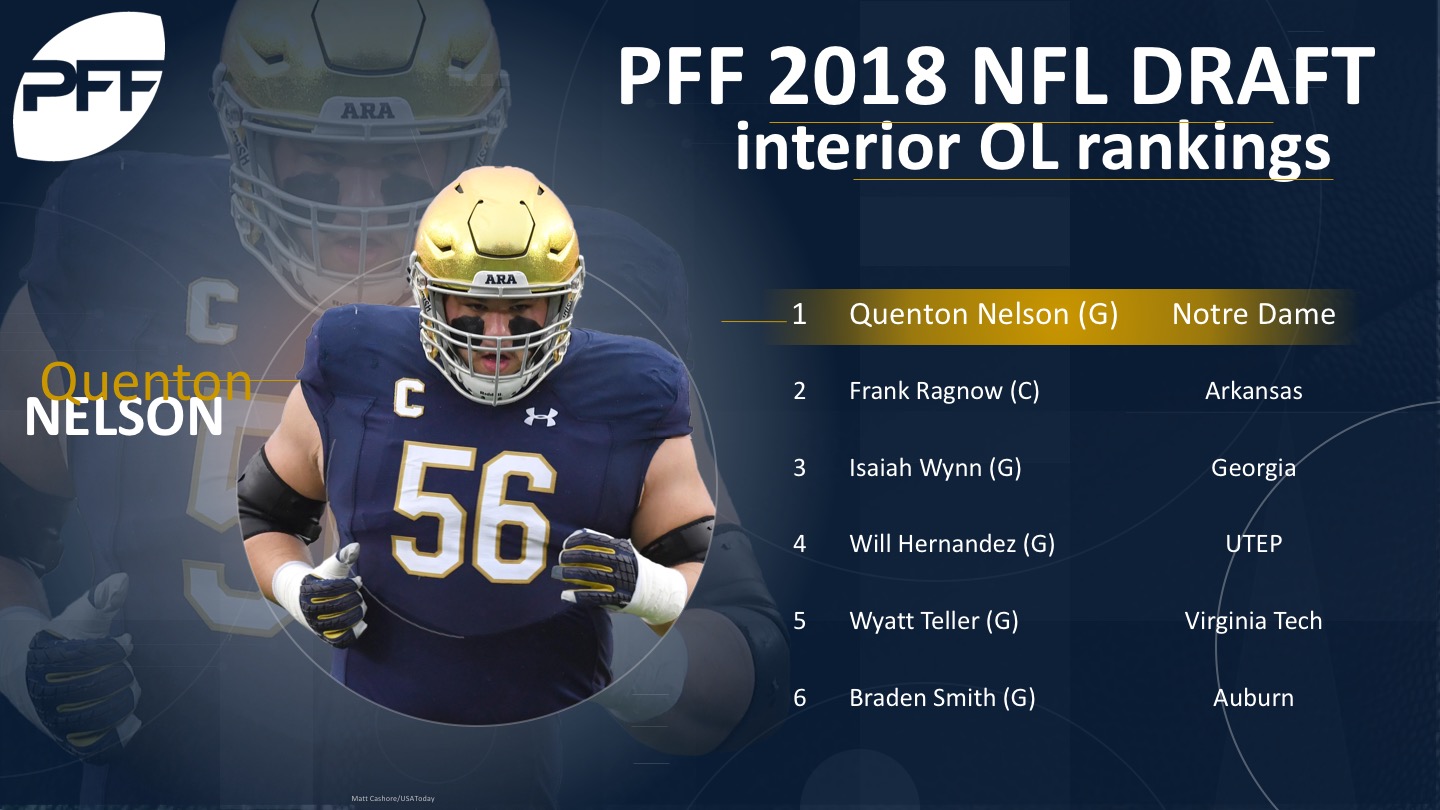 Teller possesses about as much nastiness as any offensive linemen in this draft class when he wants to show it. He had some of the most dominant blocks we've seen this past season and that explosiveness will translate well to the NFL. Teller is a four-year starter with impressive grades each season.

Smith plays angry snap after snap, consistently playing to the whistle. He’s not the most natural of athletes, but his power in a phone booth is special. He finished 2017 as PFF’s third-highest graded guard.

Daniels finished this past season as PFF’s third-highest graded center and improved every year of his career. He rarely ‘wow’s,' but he plays as under control as any center prospect in the draft.

The Nevada left tackle stepped onto the field as a freshman in 2014 and was already one of the better pass protecting left tackles in the nation. That season, he allowed all of 17 total pressures and has only gotten better since. Corbett is far more technically sound than most small school tackle prospects and could legitimately start in the NFL as a rookie. He likely profiles best to the interior at the next level.

Clapp has multiple years grading very well in the SEC at both center and guard. That’s an impressive accomplishment in and of itself. Add in some of the best hands in this draft class, and Clapp is ready to start sooner rather than later.

Cole played both tackle and center at Michigan, but never quite mastered either. He’ll be on the interior in the NFL, where that cross-training could be seen as a positive. Cole also hails from a creative, pro-style run scheme at Michigan that should translate well at the next level.

Gossett is a perfect fit for an outside zone scheme as he consistently makes difficult reach blocks. He must improve in pass protection after posting a 76.0 grade in that department last season, but he has four strong years of solid, 80.0-plus overall production.

Kolone led the draft class with a pass-blocking efficiency of 99.7 last season, allowing only one pressure on 244 attempts. He has three strong years of grading, including a 90.7 overall mark in 2016.

Allen has been one of the top non-Power 5 tackles in the country for the past three seasons and has the requisite athleticism to kick in to guard at the next level.

Bosch finished with three straight years of solid production including an 87.1 grade in 2016 and an 86.9 mark last season. He allowed only 23 pressures over the last three years.

Bozeman was very consistent over the course of his career at Alabama. His lack of strength and athleticism will be an issue heading into the league.

Allen hails from a pro-style running game at Michigan State that projects well to the NFL. Unfortunately, Allen is undersized for the position and power will give him issues at the next level.

Jones is nothing special athletically, but still got the job done more often than not for the Sun Devils with back-to-back years of solid grading.

Woods had strong finish to his FAU career, grading at 86.4 overall. He can make the necessary blocks required in a zone scheme and he finished 11th in the draft class with a pass-blocking efficiency of 98.7 last season.