Draft season chugs along, moving from NFL Combine week to the slate of pro days over the next month or so. At PFF, our evaluations continue to evolve as we gather new information while still analyzing our play-by-play grading from previous seasons.

Mock Draft 4 features a change at the top of the draft, as the Arizona Cardinals should be seriously considering Oklahoma QB Kyler Murray for the No. 1 overall pick, and that’s what I would do if given the reins. As always, my mock draft is a snapshot of what I would do as GM of every team, not a prediction of what will happen, so it may not look like any other cookie-cutter mock draft littered with the same names and draft positions.

[Editor's Note: All EDGE and ELITE subscribers have access to PFF's 2019 NFL Draft Guide, which officially launched March 7, 2019. Sign up today with promo code “NFL2019” to receive 25% off any of our subscriptions.] 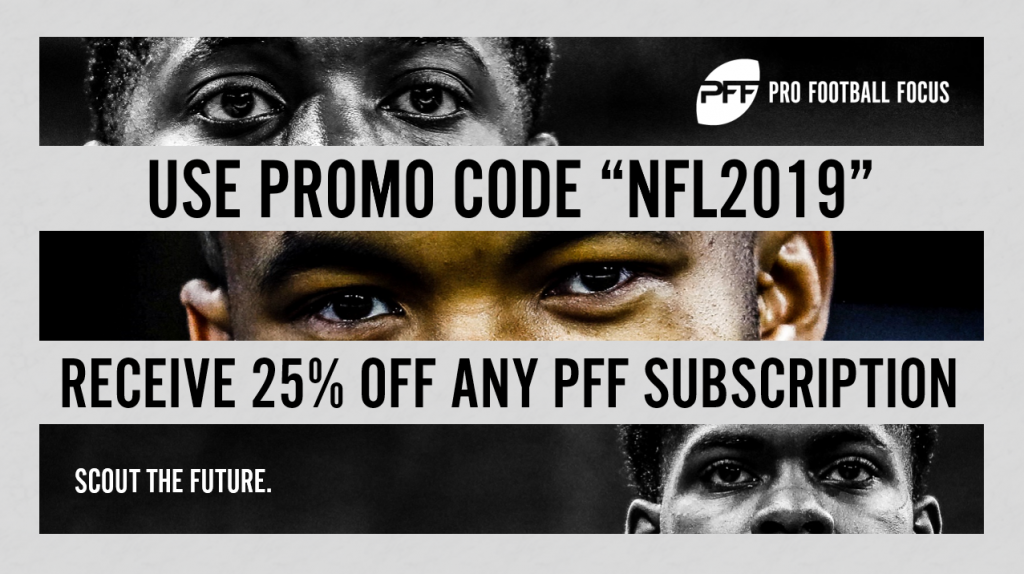 After much debate, I believe this to be the right move for the Cardinals. The highest-graded passing and running quarterback in the nation last season, Murray has the accuracy and athleticism to move the ball at the next level, and that's enough for Arizona to make the move and build around his skillset. 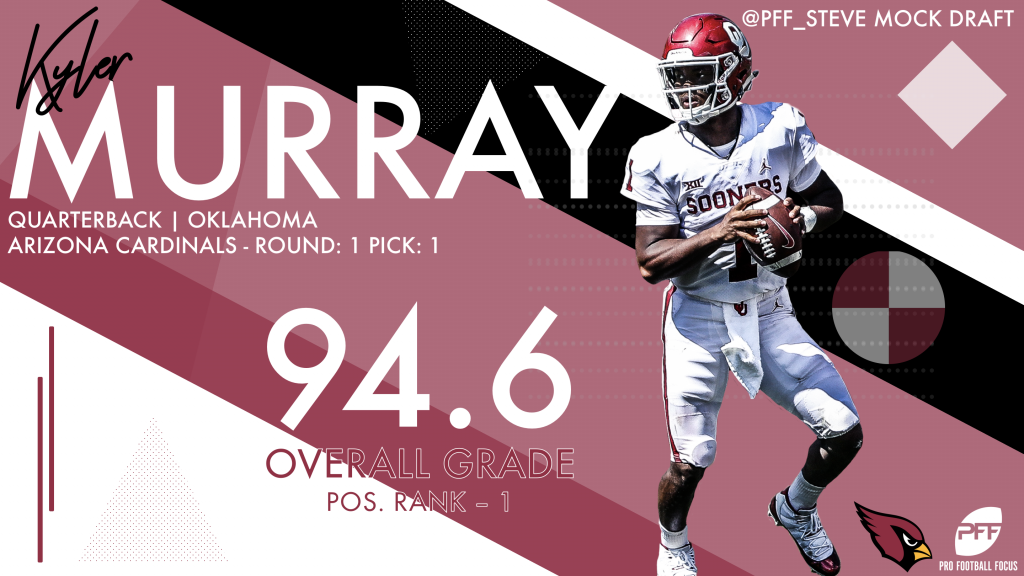 Pass-rushing off the edge has been an issue for the 49ers, and Bosa is the best edge defender in the class. He has 117 pressures on only 607 career rushes while posting a nation-high 92.5 pass-rush grade in 2017. 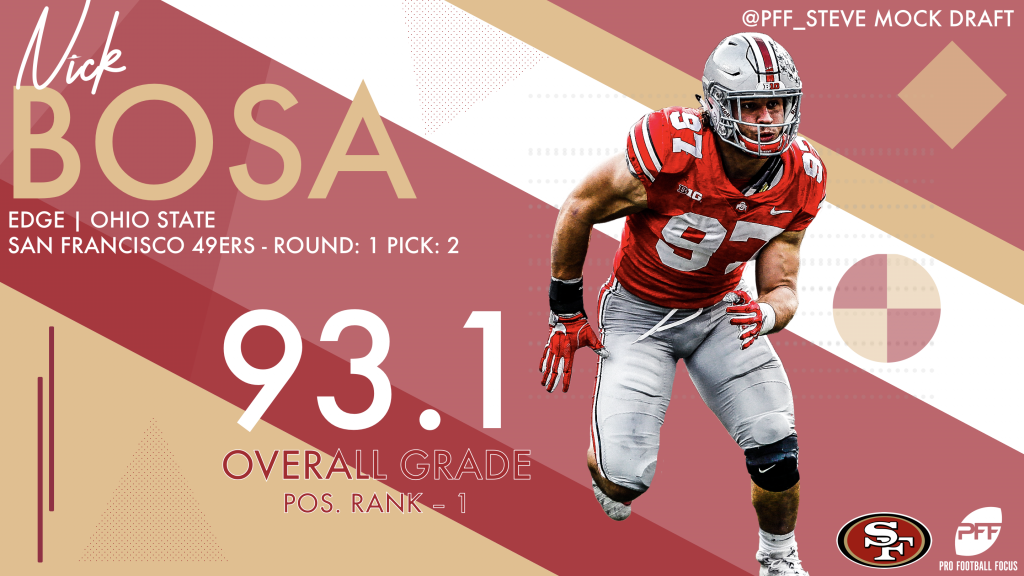 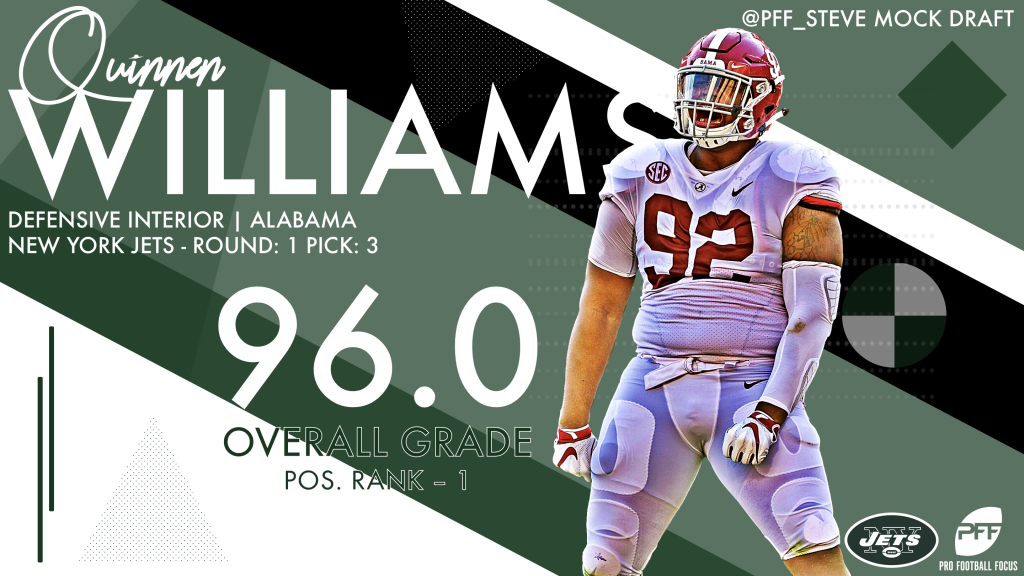 Another pass-rusher comes off the board in Allen, who put up the highest pass-rush grade in the nation last year at 94.3. He also brings coverage versatility that can be tapped into. 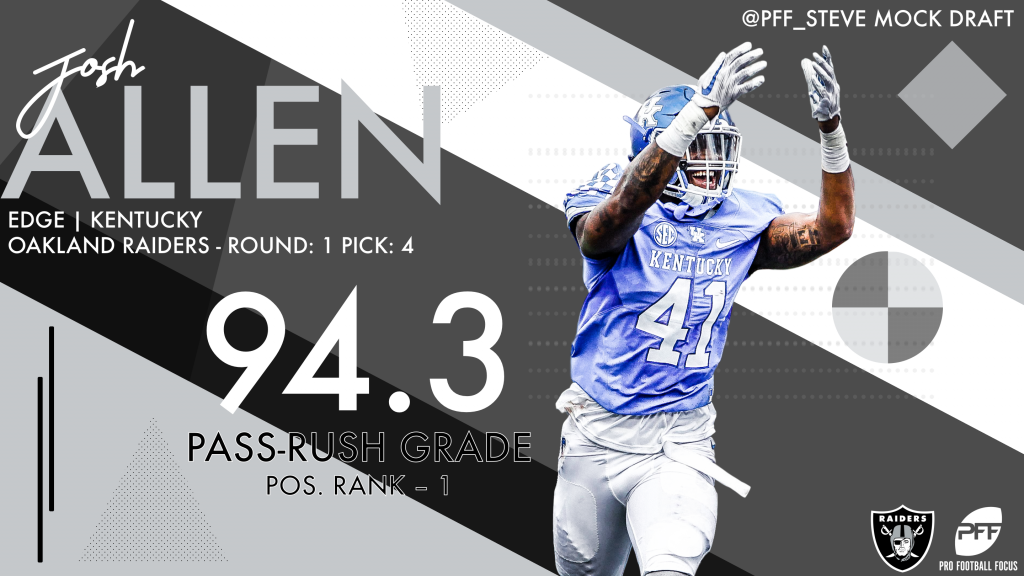 There's not a consensus top cornerback in the class, but Baker may be the best fit for multiple schemes. He has strong ball skills and allowed a passer rating of just 40.2 into his coverage last season. 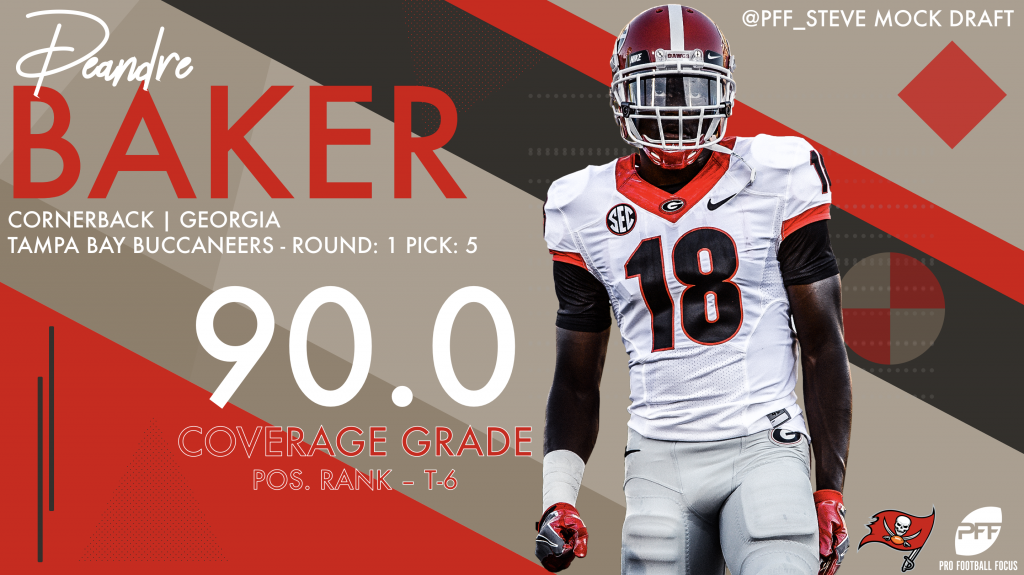 The Giants will likely need to trade up to get Haskins, but either way, they're happy to add him as their next signal-caller to build around. He is a solid passer from within the pocket but must improve at making plays outside of structure and under pressure.

Williams should get an opportunity to play tackle at the next level, but the Jaguars can start him at guard as they continue to add pieces up front. Williams allowed only 12 pressures on 482 attempts last season.

One of the best potential fits in the first round, Williams has the size and speed to play the man coverage the Lions covet. He allowed only 40.3 percent of passes to be completed into his coverage last season.

Another great scheme fit, Murphy has excellent zone skills that fit the Bills perfectly. He posted the nation's top grade a year ago at 92.0 overall, and even with the offensive holes, the Bills can continue to build their coverage unit while grabbing offensive playmakers in the second and third rounds.

An interior disruptor, Oliver has been outstanding against the run while showing the skills to make an impact as a pass-rusher at the next level.

Everyone wants to see this marriage, as the Bengals need middle-of-the-field speed and White has plenty of it. He improved greatly in 2018, grading at 90.0 overall and 91.6 in coverage.

Tillery can move around the defensive front and create havoc. He tied for the nation's top pass-rush grade at 92.5. Green Bay's current depth chart shouldn't scare the front office from adding another pass-rushing piece.

Miami has a hole at right tackle and can fill it with one of the best pass protectors in the draft. Dillard's 94.0 pass-blocking grade ranked second among tackles in the nation last season.

Wilkins took a step forward as a pass-rusher in 2018, grading at 91.0, third-best among interior defensive linemen. He adds another three-down, versatile option up front for Atlanta.

Burns had a breakout 2018 season, ranking third in the country with 66 total pressures and a 90.4 pass-rush grade.

A mauler in the run game, Taylor creates movement at the point of attack. He's solid in pass protection, allowing only 10 pressures on 421 attempts last season.

Despite an offseason injury, Simmons is good mid-round value, as he can stop the run and get after the quarterback on the interior. He fills a big need up front for Cleveland.

Need and value match up well, as Risner has been one of the nation's top offensive linemen over the last four years. He's allowed only 29 pressures in four years starting at Kansas State.

An explosive outside threat, Metcalf has big-play ability that instills fear in defenses. He may never be a 100-catch receiver, but he is a good complement in an offense with a strong possession presence on the other side.

Arcega-Whiteside has an impressive mix of body control and power-forward-like ball skills, all leading to the best-contested catch rate in college football last year and a new weapon for Ben Roethlisberger.

Even with Frank Clark returning on the franchise tag, Seattle still must address their pass-rush. Ferrell has continued to improve, grading at 89.7 as a pass-rusher last season.

With C.J. Mosley hitting free agency, Bush adds an explosive presence in the middle of the field who can also attack as a blitzer (47 pressures on only 184 career rushes).

The offensive line must be addressed by the Texans, and Ford can play tackle or perhaps land at guard if needed. He allowed only seven pressures in 2018.

The Raiders add another important piece to their defense in Oruwariye, who has excellent size, movement skills and ball skills. He allowed only 52 percent of passes to be completed into his coverage last season.

Brown can win either outside or in the slot. He's also excellent after the catch, as he broke 50 tackles on 188 career catches, good for 7.6 YAC per reception.

Layne may not be a first-round prospect for everyone, but his length and feel for zone coverages make him an excellent fit for the Colts' defensive scheme. He graded at an impressive 89.5 in coverage last season.

Oakland goes to the offensive side this time, adding the best all-around tight end in the draft in Hockenson. He had the nation's No. 2 receiving grade at 90.8 last season and tied for fifth in the draft class with a 74.1 run-blocking grade.

Adderley's downfield ball skills are a good fit at free safety in the Chargers' scheme, as he allowed a passer rating of only 9.4 on passes into his coverage a year ago while posting an 88.5 coverage grade.

Rapp can make plays all over the field and adds a sure tackler to the Kansas City defensive backfield after missing only 12 tackles in his three-year career at Washington.

A speedy deep threat on the outside, Isabella adds a vertical weapon to the Green Bay offense after posting the nation's top receiving grade at 93.3 last season. His 4.31 40 time shows up on the field.

Jenkins fits a position of need for the Rams, and he's been one of the nation's best centers over the last four years. He allowed only five pressures last season.

Allen's power on the edge makes him a nice fit in New England, as he plays the run well and improved greatly as a pass-rusher last season, grading at 90.3.