Most and least improved units following the 2022 NFL Draft

The NFL offseason isn’t over. Several impact players are still available in free agency, but the time for big, roster-changing moves drew to a close with the conclusion of the 2022 NFL Draft.

We’ve already analyzed and assigned grades to all 32 draft classes. Let’s now look instead at the individual position groups that improved the most (and least) over the weekend.

With how the Lions have addressed the past two offseasons, there’s no doubt general manager Brad Holmes and head coach Dan Campbell want to build this roster back up through the trenches. Oregon tackle Penei Sewell was the headliner of a 2021 Lions draft class where the first three selections attacked the offensive and defensive lines. Detroit followed that up by adding two top-50 players on PFF’s big board to its defensive line in the 2022 NFL Draft.

It’s difficult to see Aidan Hutchinson failing to produce in Detroit. The 6-foot-7, 268-pound edge defender out of Michigan might not quite be the athlete that No. 1 overall pick Travon Walker is, but he did earn 95th percentile or better finishes in the change-of-direction drills (shuttle and three-cone). And from a production standpoint, Hutchinson graded out just below the elite Myles Garrett–Nick Bosa–Chase Young tier over his college career. 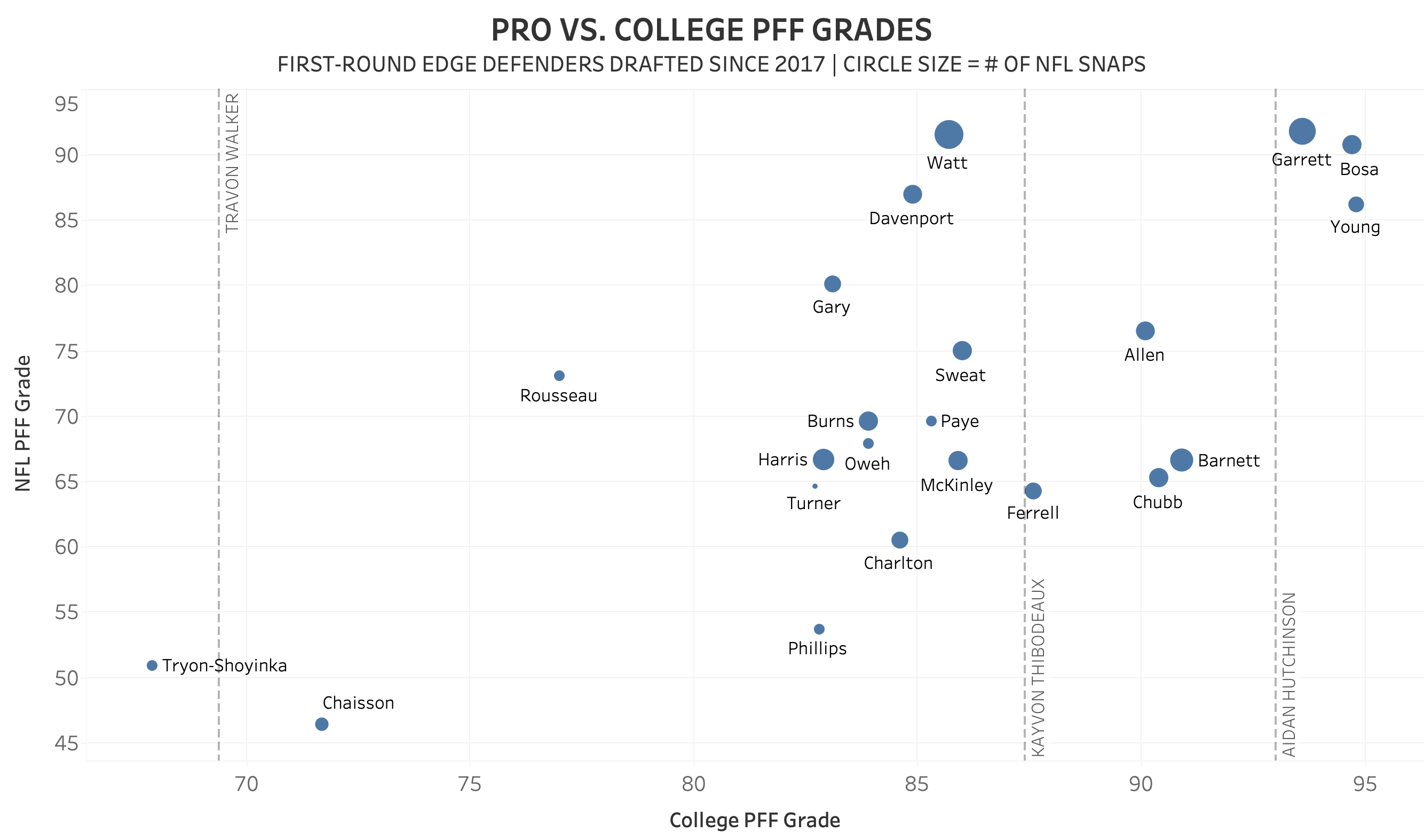 Detroit’s second-round selection, Josh Paschal, is an explosive 270-pound edge defender out of Kentucky. He’s not going to consistently win as a pass-rusher, but he will push the pocket and can line up both inside and outside depending on the front. Paschal is coming off a career-best 90.0 PFF grade with the Wildcats in 2021.

The Lions now have an intriguing edge rotation, with Hutchinson and Paschal joining the Okwara brothers and Charles Harris, who is fresh off a two-year, $13 million extension.

The Bears’ 2022 NFL Draft had its flaws, but they did manage to get strong value in the secondary in the second round.

Washington’s Kyler Gordon will likely get the first crack at the starting job opposite Jaylon Johnson outside, although he showed at Washington that he can play in the slot, as well. As the PFF Draft Guide put it, Gordon has some of the best burst in the class, even if his 40-yard dash time (4.52 seconds) was worse than expected. He was billed as a first-round talent by many and addresses a glaring need for a cornerback room thin on talent.

The Bears doubled down in the secondary with Penn State safety Jaquan Brisker in Round 2. Like Gordon, he’s an explosive athlete with good size and will be best utilized in and around the box. He’s a willing and physical tackler who earned a 79.4 PFF run-defense grade across his three seasons with the Nittany Lions to go along with strong marks in coverage.

Those are big additions for a secondary that collectively ranked 26th out of 32 defenses in PFF grade last season.

Wide receiver had quietly become a need in Pittsburgh with JuJu Smith-Schuster heading to the Kansas City Chiefs and Diontae Johnson scheduled to hit free agency in 2023. As they’ve done consistently over the past decade, the Steelers reloaded at the position on Days 2 and 3 of the draft.

Georgia’s George Pickens could have very well been a top-15 selection had he not torn his ACL prior to last season. He was one of the most talented wide receivers in this class and a potential starting “X” receiver who got pushed down boards due to injury and maturity concerns.

Pickens’ ability to win at the catch point and haul in any catchable ball thrown his way will be a welcome addition to an offense that has dropped more passes than any other team in the NFL (75) over the past two years.

Memphis’ Calvin Austin III is a very different receiver than Pickens stylistically. He's 5-foot-8 and 170 pounds with 30-inch arms, so the Steelers need to use him creatively. But it’s not difficult to see him having an impact in Pittsburgh as a sudden, crafty route-runner and dynamic athlete with the ball in his hands. A 4.32-second 40-yard dash and 11-foot-3 broad jump is the kind of juice that a player of Austin’s size needs to stick in the NFL. He can create problems on jet motion, too, which is a massive part of Matt Canada’s offense.

It wasn’t exactly a high bar to clear, but this was comfortably the Texans’ best draft in the past three years — thanks in large part to their secondary additions.

Derek Stingley Jr., the No. 2 overall player on PFF’s big board, perhaps was the most talented player in the entire draft. He was never able to build on a dominant true freshman season at LSU in 2019, but that performance was impressive enough to keep him as a top-three selection. Stingley tallied 21 combined pass breakups and interceptions and earned the highest PFF coverage grade in the FBS as an 18-year-old going up against a laundry list of elite SEC wide receivers.

Jalen Pitre lined up primarily in the slot as the “Star” in Dave Aranda’s Baylor defense, but he can wear several different hats for Houston, whether that be as a nickel, dime backer or more traditional safety. He put up PFF grades above 75.0 as a run defender, coverage defender and pass-rusher in each of the past two years and provides the Texans with a well-rounded skill set.

Those two stand out as foundational pieces on a defense that desperately needed an injection of talent.

We'll group these two together after both teams traded away their No. 1 wide receivers for first-round picks on Day 1.

The Titans used that first-round pick on Arkansas’ Treylon Burks while getting good value on UCLA’s Kyle Philips on Day 3, but A.J. Brown‘s departure still leaves a massive void on offense. He’s been one of the most productive receivers in the NFL on a per-snap basis since he was drafted in 2019.

Most receiving yards per route run since 2019

Even with that loss, the Titans' receiving corps is in better shape than Baltimore’s. The team got a good return for Marquise Brown by selecting center Tyler Linderbaum with the extra first-rounder, but the Ravens’ current wide receiver group — headlined by Rashod Bateman, Devin Duvernay, Tylan Wallace and James Proche — leaves a lot to be desired.

Baltimore did add two receiving threats at tight end on Day 3 in Iowa State’s Charlie Kolar and Coastal Carolina’s Isaiah Likely, but it still looks like the Ravens are going to have to lean heavily on Mark Andrews in 2022 unless they plan to sign more help in free agency.

No team earned a lower draft grade (D) from PFF than the Patriots. They consistently reached for players, not just according to PFF’s rankings but also the consensus big board.

Many of New England’s bigger needs were on defense, but the team allocated just three of its 10 draft picks to that side of the ball.

While he projects as one of their better picks, Houston cornerback Marcus Jones doesn’t have the size to address the Patriots’ hole at outside cornerback. Arizona State cornerback Jack Jones was taken over 100 picks before his consensus big board ranking (238th) as a 24-year-old who doesn’t have great size at 6-feet tall and 177 pounds. They rounded it out with edge defender Sam Roberts out of Northwest Missouri State — the rare prospect without a PFF player page prior to the draft.

That’s not much help for a defense that could have used a starting-caliber cornerback on the outside and an off-ball linebacker to go along with some more depth on the edge.

The Bears’ improvements in the secondary came at the expense of surrounding quarterback Justin Fields with talent on offense — what should have been the top priority for Chicago this offseason.

Below are the Bears’ projected starters on offense as things stand right now.

That very well could be the worst supporting cast for any quarterback in the NFL. The team's lone pick to address the offense in the first three rounds of the draft was spent on Velus Jones Jr. — the 193rd-ranked player on PFF’s big board — at 71st overall. The Bears threw several late-round darts at the offensive line, but the hope is that one or more of Braxton Jones, Zachary Thomas, Doug Kramer and Ja’Tyre Carter pans out.

It’s understandable that first-year general manager Ryan Poles wants to take the slow-and-steady approach to rebuilding this roster, but Chicago is putting a lot of pressure on Fields to improve in his second NFL season despite having even less talent around him than in his rookie season.

The Cardinals got reasonable value from their first three draft picks — Trey McBride, Cameron Thomas and Myjai Sanders — but the strategy behind those selections seems questionable at best.

McBride now joins Zach Ertz and Maxx Williams, both of whom were given new contracts recently, on an offense that has run more 10 personnel without a tight end on the field than any other offense in the league over the past three seasons. Edge defender was a need, but the double-dip of Thomas and Sanders comes at the cost of the backend of the defense.

Byron Murphy Jr., the Cardinals’ top cornerback, has played 60% of his snaps in the slot over the past two seasons. If he’s playing primarily on the inside, that leaves Marco Wilson and Breon Borders as the favorites to start on the outside. Wilson earned just a 48.6 PFF grade as a rookie in 2021, and Borders has played more than 100 defensive snaps in a season just once in five NFL campaigns. Former first-round pick Jeff Gladney was also added to the mix after being found not guilty on the felony assault charge that led to his release from the Minnesota Vikings.