Hidden Gems – most underrated players in the 2018 NFL Draft

There are many ways to identify underrated players, and those familiar with PFF’s draft board and mock drafts certainly know a few names that are PFF favorites. From Oklahoma's Baker Mayfield to Michigan’s Maurice Hurst, there are a handful of players who have excelled above their peers in college and project well in the NFL. Beyond the top names, there are a number of players who are not getting top-round hype, but are deserving of middle-round love and their on-field production gives them a good chance for next-level success. 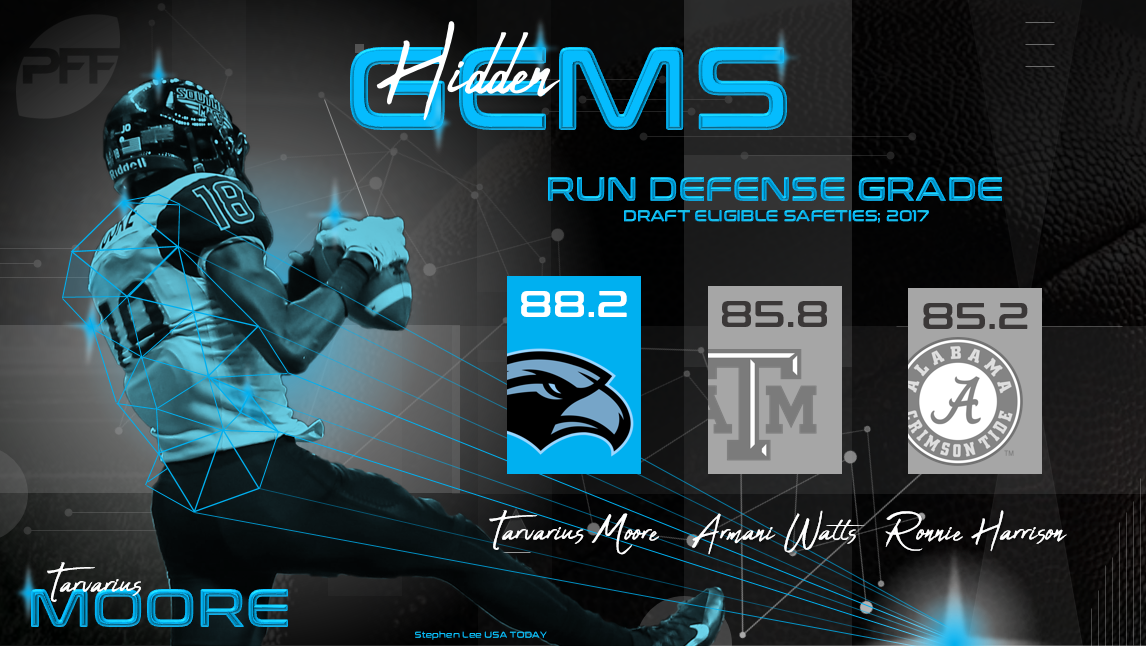 A 2017 PFF College First-Team All-American, Moore has created even more buzz with a 4.32 40-time at his pro day. He had an outstanding 2017, finishing with an 86.8 grade against the run and an 84.2 mark in coverage. Moore’s movement skills show up on the field as he hangs with receivers in one-on-one situations as well as any safety in the class and he closes in a hurry on underneath passes when playing zone coverage. He can get caught with his eyes in the backfield on play-action, so there are a few ugly plays on film, but Moore has the skills to develop into a solid all-around safety with versatility on the back end due to his size and speed.

Gossett had an excellent career at Appalachian State, grading at 80.0-plus in all four years, including an 89.6 sophomore season that saw him rank second in the nation among guards. Gossett has good size for the next level, but it’s his zone blocking that stands out as he has a number of impressive reach blocks on tape. He regularly gets out and turns defenders on the front side of outside zone plays, and his ability to execute those difficult blocks make him attractive to outside zone teams. Gossett still has room to improve in pass protection where his grade has been on the decline in each of the last three seasons, but he’s excellent in the run game and his experience playing right tackle only helps his versatility at the next level. 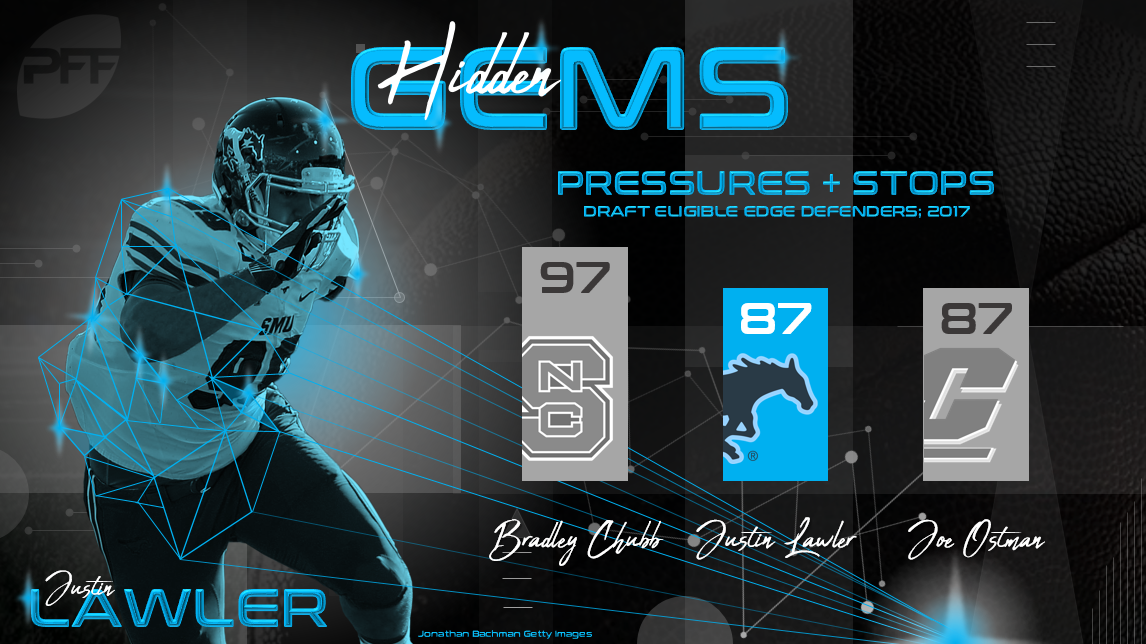 The nation’s top-graded edge defender last season with a 91.0 overall grade, Lawler’s projection represents a classic battle between production and athleticism. He notched nine sacks, 12 QB hits and 36 hurries on 336 pass-rush grades while doing an excellent job against the run. He plays with power on his way to the quarterback, attacking offensive linemen with a variety of pass-rush moves. The lack of athleticism does show up on tape as he was unable to turn quick pressures into sacks, but when it comes down to it, winning blocks and at least creating pressure is more valuable than not winning at all. Lawler’s low pad level and strong technique give him a chance to succeed at the next level, even if he was unable to wow with a pedestrian showing at his pro day.

Another productive edge defender, Ostman finished with 14 sacks, nine QB hits and 29 hurries on only 339 rushes on his way to a career-high 90.4 overall grade. Unlike Lawler, Ostman had a strong pro day, showing a solid 10-yard split at 1.68 seconds to go with a 7.02 3-cone. It’s always good to combine production with athleticism, and Ostman ticks those boxes. On the field, he uses his hands as well as any edge defender in the class, while showing strong balance when working through contact. Ostman is slightly undersized and he only has one year of production under his belt, but continued progression combined with solid athleticism make him one of the more intriguing mid-to-late round options.

After playing left tackle at Nevada, Corbett will likely move inside at the next level, though he adds value due to his ability to play anywhere up front. He was a four-year starter at Nevada, allowing only 23 pressures over the last two years and consistently grading well in the run game. Corbett’s hands and technique give him a chance at the next level, and he showed extremely well during his week at the Senior Bowl when playing both guard and center. Corbett’s multi-position flexibility combined with four years of strong production make him a solid mid-round option in this draft. 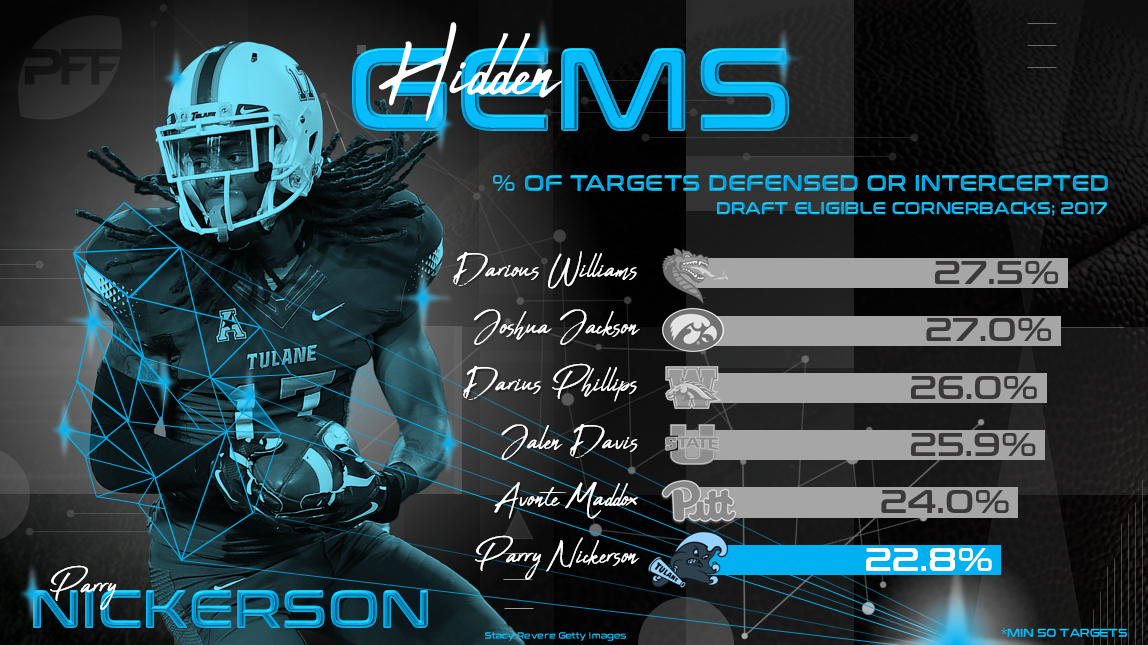 Running a 4.32 40-yard dash at the NFL combine may have put Nickerson further on the radar for NFL teams, but he has four years of strong production under his belt from a PFF standpoint. He’s graded at 80.0-plus in three of his four seasons at Tulane, flashing impressive ball skills that saw him pick off 16 passes and deflect 25 on 240 career targets. Nickerson has a few spectacular plays on tape in which the speed shows up in a big way, and when combined with his ability to play the ball in the air, Nickerson has the tools to make an impact on the outside. He capped his career with his two highest grades (84.2 in 2016, 85.7 last season), allowing only 45 percent of targets to be completed into his coverage while allowing only two touchdowns to go with 10 interceptions.

With four years of PFF grading of 85.0-plus, Teller is one of the most productive offensive linemen entering the draft. He’s a mauler in the run game, and he can create impressive movement when he gets his hands on defenders. Teller’s 2017 season was a slight step back from previous years, though he’s progressed nicely in pass protection and only allowed 12 pressures over the last two years. Teller’s aggressive mentality adds some boom/bust to his game as he’ll miss on some blocks, but he’s worth a look in the middle rounds where he could become a steal as an efficient starter at the next level.

Moore bounced back nicely from a 2016 injury that kept him off the field. He’s one of the better coverage linebackers in the draft, grading at 88.7 last season and 88.9 in 2015. Moore has a good feel for playing routes both in front and behind him, a necessary trait when playing zone coverage in the NFL. Overall, Moore has a great feel for the game and he’s a solid tackler who missed only 31 tackles on 322 career attempts, but there are lingering medical concerns after he missed the 2016 season due to a herniated disk in his neck that required surgery. If everything checks out, Moore adds a valuable coverage piece to any back-seven.