Elite production or freakish athleticism: Which draft prospects are better?

By the time the 2022 NFL Draft finally gets underway, Georgia edge defender Travon Walker will be a top-five pick. In fact, his odds of becoming the first overall pick seem to get shorter each day, and he even started draft week as the betting favorite (-160 at DraftKings) to be selected No. 1 overall by the Jacksonville Jaguars.

If you're looking for the reason behind his last-minute surge up draft boards, look no further than the elite athletic abilities he showcased at the 2022 NFL Scouting Combine in Indianapolis.

A fringe first-round pick in January and February, Walker posted elite numbers in the 40-yard dash (98th percentile among edge rushers) and three-cone drill (93rd) while raising eyebrows with an 87th-percentile broad jump, 80th-percentile vertical jump and a 76th-percentile shuttle.

It is common for elite athletes to be selected at the top of the draft, but very few have ever boasted a production profile quite as weak as Walker's.

Here are Walker’s PFF Wins Above Average (WAA) numbers for his three college seasons with the Georgia Bulldogs.

The good news is that one could say that the Georgia product progressed throughout his college career. The bad news is that since 2015, no prospect with a single-season maximum of 0.08 WAA has ever been selected in the top five of a draft.

Given how unusual his lack of production would be for such a high pick, it is no surprise that PFF's Sam Monson and Ben Linsey have already written about him and his outlook in the NFL. After all, Kayvon Thibodeaux generated more than 0.08 WAA in each of his three seasons at Oregon, and Aidan Hutchinson produced 0.88 WAA in 2021 — more than 10 times the number Walker generated in his best season.

This article wants to look at the general case of athleticism and production to see how elite athletes with a lack of college production have fared in the NFL.

First of all, we need to establish how we measure production and athleticism. To measure production, we can use PFF WAA. The advantage of this metric is that it exists for every position and is a reasonable blend of per-snap efficiency and volume, as both matter when evaluating a draft prospect.

We will normalize WAA numbers to have a better comparison across positions and only look at a prospect's best season. The final production number will be the percentile in which a prospect ranks among all drafted players.

To quantify athleticism, we will leverage the athletic score my colleague Eric Eager developed as part of his college-to-pro projections.

One advantage of these two metrics is that there is basically zero correlation between the two among all drafted players since 2015, and that’s true across all three days of the NFL draft. This makes the analysis of the effects of those two features on NFL success a bit easier. 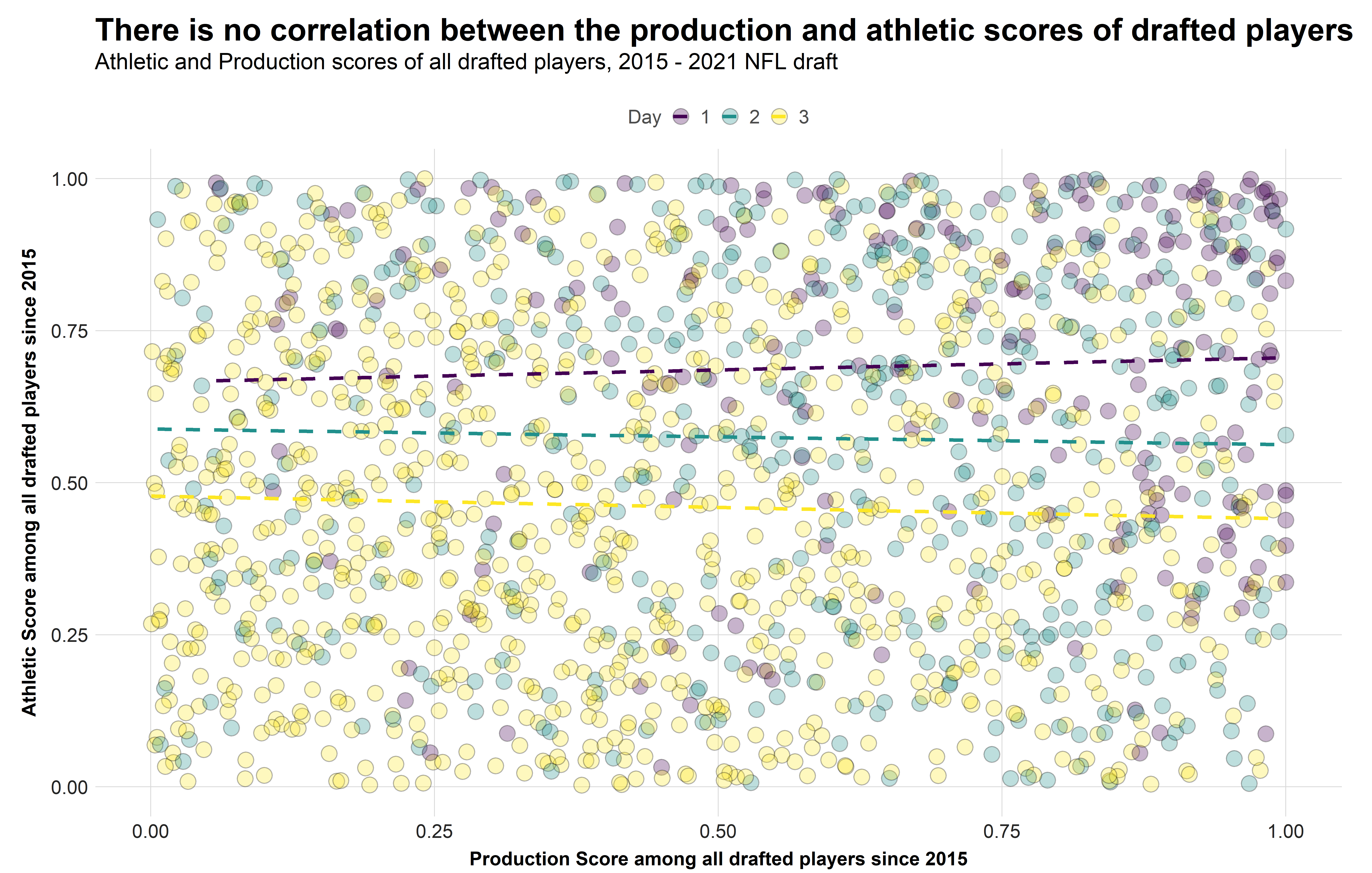 We find most first-round picks on the upper right of the above chart, while the lower and left regions are crowded with Day 3 picks.

As a first idea of how athleticism and production determine NFL success, we look at all top 15 picks since 2015: