INDIANAPOLIS, IN - MARCH 05: Defensive lineman Trey Hendrickson of Florida Atlantic in action during day five of the NFL Combine at Lucas Oil Stadium on March 5, 2017 in Indianapolis, Indiana. (Photo by Joe Robbins/Getty Images)

Pro Football Focus’ Draft Daily will hit on a number of NFL Draft-related topics including recent news, scouting reports, PFF draft takes, and much more on a frequent basis.

Pro Football Focus' “pass-rushing productivity” signature stat calculates a score to reflect the frequency of pressure generated by a defender. All sacks, hits, and hurries are added up and (with sacks weighted heavier and some multipliers in place to give us a workable PRP score) then broken down on a per-pass-rushing-snap basis.

According to this metric, the most productive pass-rusher in the 2017 draft class this past season was Florida Atlantic’s Trey Hendrickson, with a PRP of 20.5. 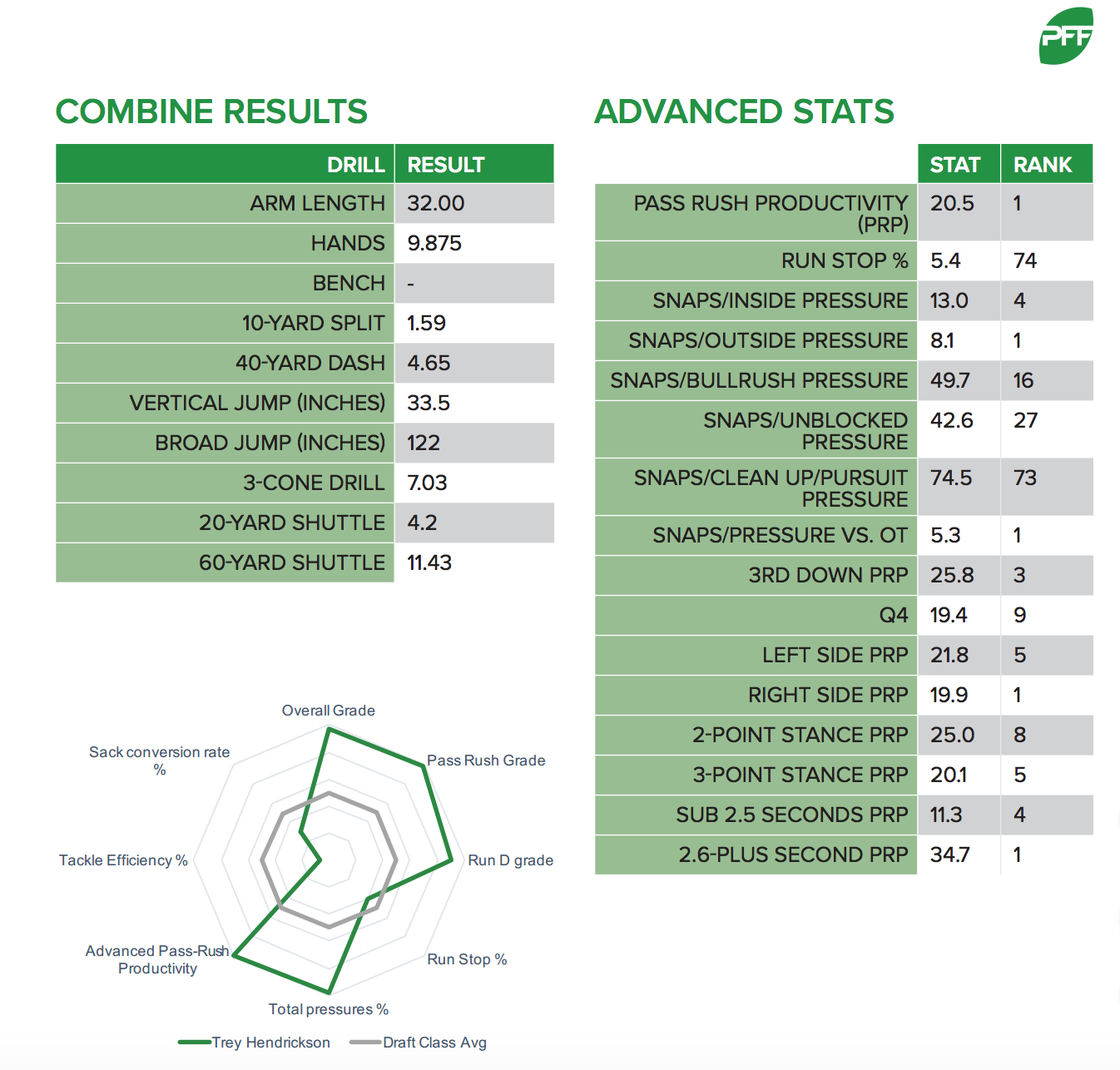 Our analysts have graded every snap of every play in every FBS game for the last three seasons. We usually only grade FCS players when they face an FBS opponent, but we will do full grades for certain FCS prospects after the season. This spring, our analysts graded Eastern Washington games specifically to look at wide receiver Cooper Kupp. One player who kept standing out when we graded the other side of the ball, though, was the Eagles’ talented edge defender, Samson Ebukam. More than one PFF analyst believes Ebukam is the best prospect out of Eastern Washington—not Kupp.

Ebukam recorded 11 sacks, 10 hits and 42 hurries on 398 pass-rushing snaps in 2016. His pass-rushing productivity mark of 13.2 ranks No. 13 among 3-4 OLBs in the draft class. Ebukam can also play the run, and his 25 run stops ties him at No. 4 among 3-4 OLBs in the draft class. At Eastern Washington’s pro day, Ebukam reportedly ran a 4.45-second 40-yard dash, recorded a vertical jump of 39 inches, a broad jump of 10-foot-10, and 24 bench press repetitions of 225 pounds. Ebukam is a prospect that combines dominance on tape, outstanding production grades and explosive athleticism. We believe that Ebukam can contribute to an NFL team as an edge-rusher.

Vanderbilt LB Zach Cunningham recorded three straight years of excellent grades, and is a three-down linebacker in the NFL.

Zach Cunningham finished fourth in run stop percentage among all FBS inside linebackers in 2016.https://t.co/LOOS8l5mIk

The latest version of the PFF Podcast—Draft Preview 7.0—is a must listen. Some highlights from this week's episode include: Mike Renner getting annihilated by the offensive line community for one of his takes, reading some fan (see hate) mail, and Steve Palazzolo and Renner discussing over and underrated traits for each position group. We also continue to produce PFF podcast shorts on individual prospects.