Last week, I released the results of historical modeling on the NFL Scouting Combine since 2006 and quantified the effect of NFL value (according to PFF WAR) and draft position for all measurements and drills.

In this analysis, I’m going to apply the value models, with a few tweaks, to the results of the 2022 class' combine, focusing on defensive positions. Earlier this week, we released the model results for offensive positions in this year’s class.

Below, I’ll show an updated illustration for the attribute effect — i.e., the impact of outperformance on early-career wins WAR (first three seasons) and NFL draft position. Some of the numbers will differ from what I calculated last week, as there were a few position groups that skipped a number of drills, which necessitated taking them out of the modeling process. 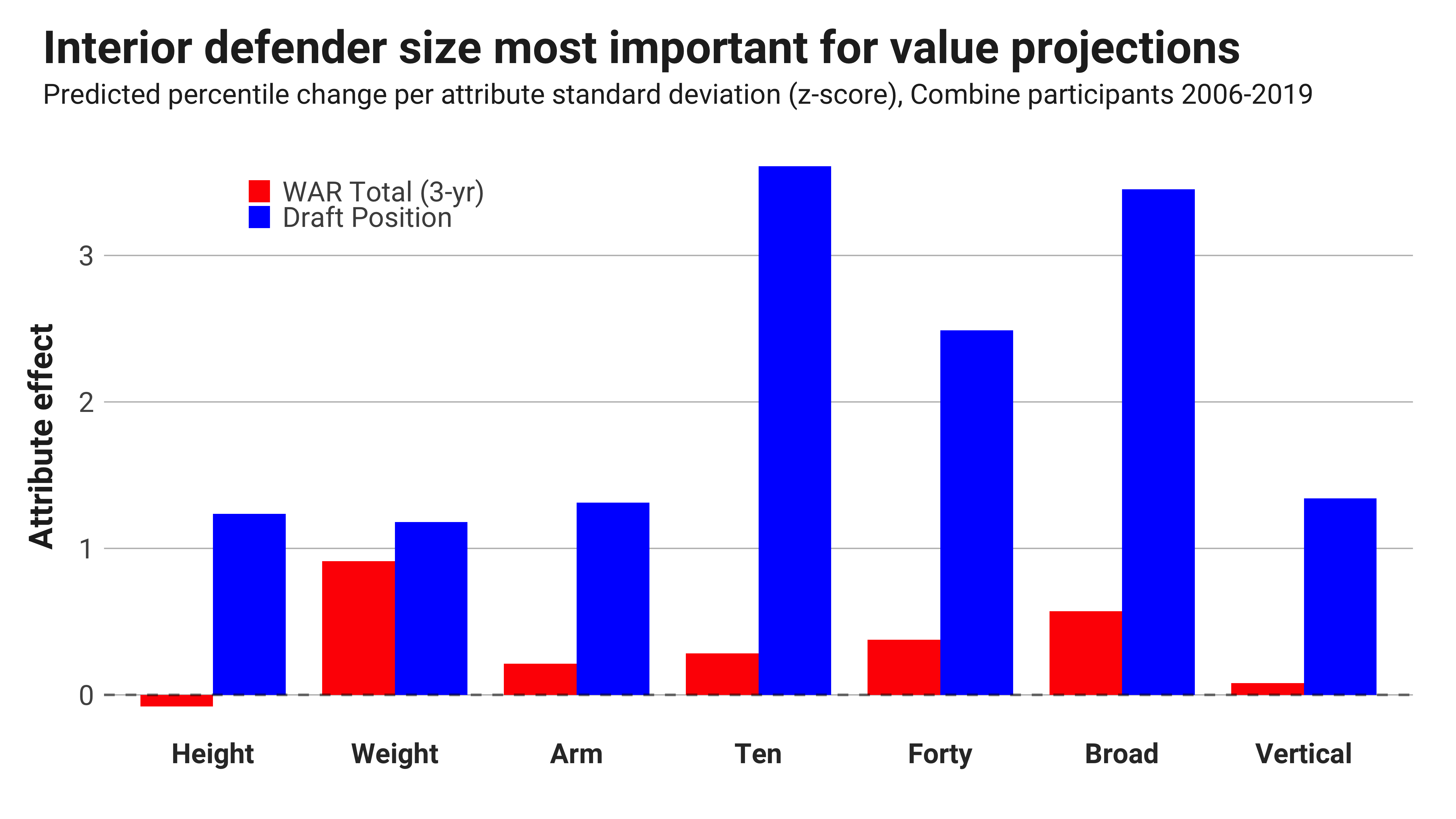 These attribute effects are adjusted from the historical analysis due to the lack of agility drill times. Only six interior defenders participated in the three-cone drill, which is one of the more significant drills for prospects. Taking out the three-cone and short shuttle, the remaining attribute effects in order of importance are: weight, broad jump, 40-yard dash time and 10-yard split.

Jordan Davis was the star of Saturday night, and his projected percentiles for WAR and draft position agree. Davis had the best combine for both projections among any of the 500-plus interior defenders in our combine database, posting the best weight-adjusted 40-yard dash time of any player, regardless of position. An NFL franchise can build its front around the 341-pound Davis, using him as a stalwart against the run with the athleticism for situational pass rushing. But Davis’ lack of reps on third down in college makes that part of his game more difficult to forecast.

Davis’ teammate Devonte Wyatt had the third-best WAR projection, solidifying his status as the likely second interior defender off of the board in the NFL draft. Haskell Garrett posted the lowest WAR projection of those interior defenders who participated in enough drills to qualify, weighing in at 300 pounds and showing decent speed but having weaker explosion in the vertical jump and not participating in the broad jump. 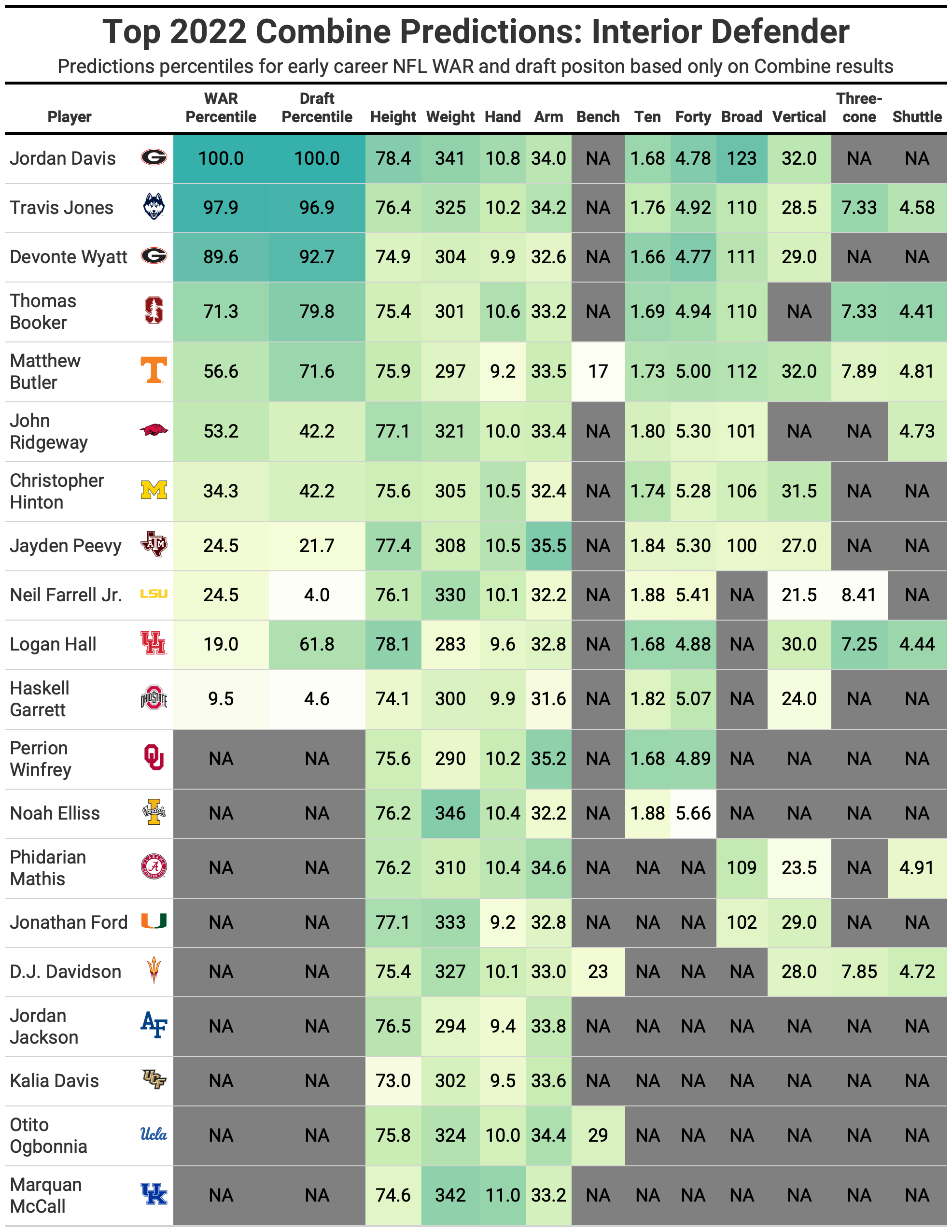 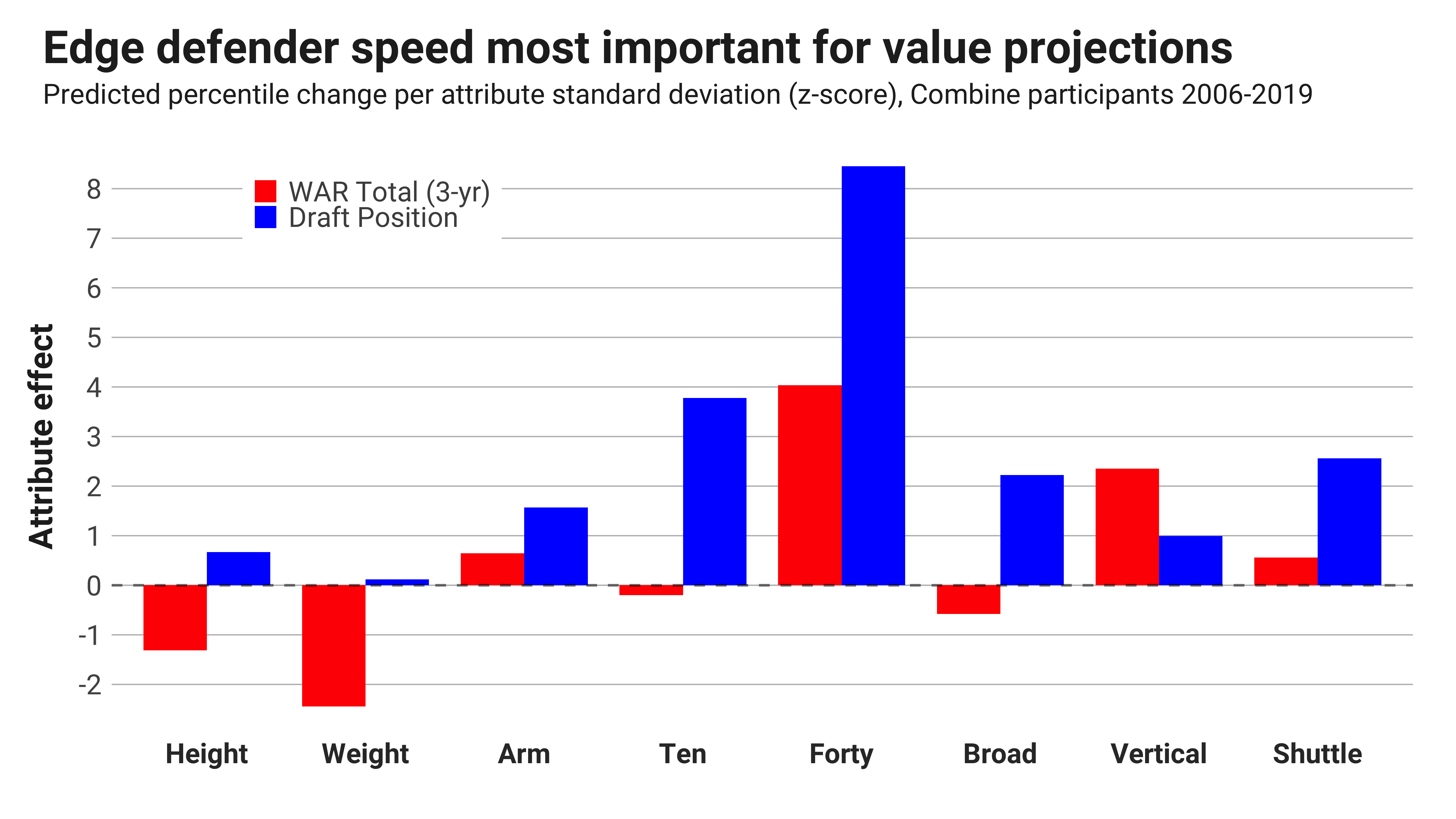 With a number of the top edge defender prospects participating in the short shuttle, I was able to keep it in the model projections, though it isn’t hugely important for projecting PFF WAR. Weight-adjusted 40-yard dash time is the most significant, followed by the vertical jump.

Potential No. 1 pick Aidan Hutchinson had the fifth-fastest weight-adjusted three-cone among nearly 500 edge defenders in our historical database, but it didn’t do a lot to move his projection. Hutchinson’s fairly pedestrian weight-adjusted 40-yard dash time puts his projections right around average for prospects who eventually play in the NFL.

Travon Walker, Boye Mafe and David Ojabo may have done the most to differentiate themselves in a deep class, each hitting the benchmarks for speed and explosion you like to see from elite pass-rushers. 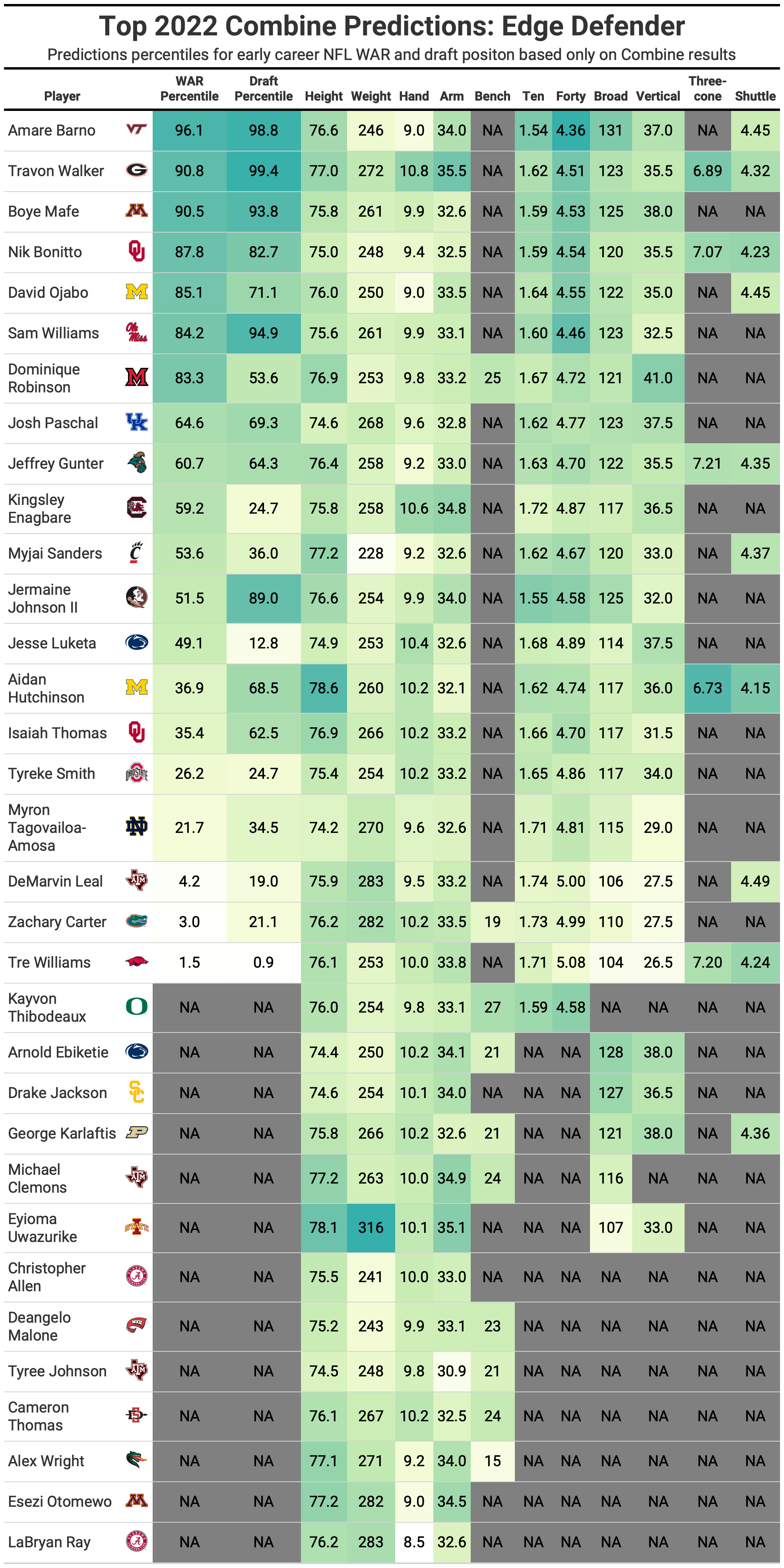 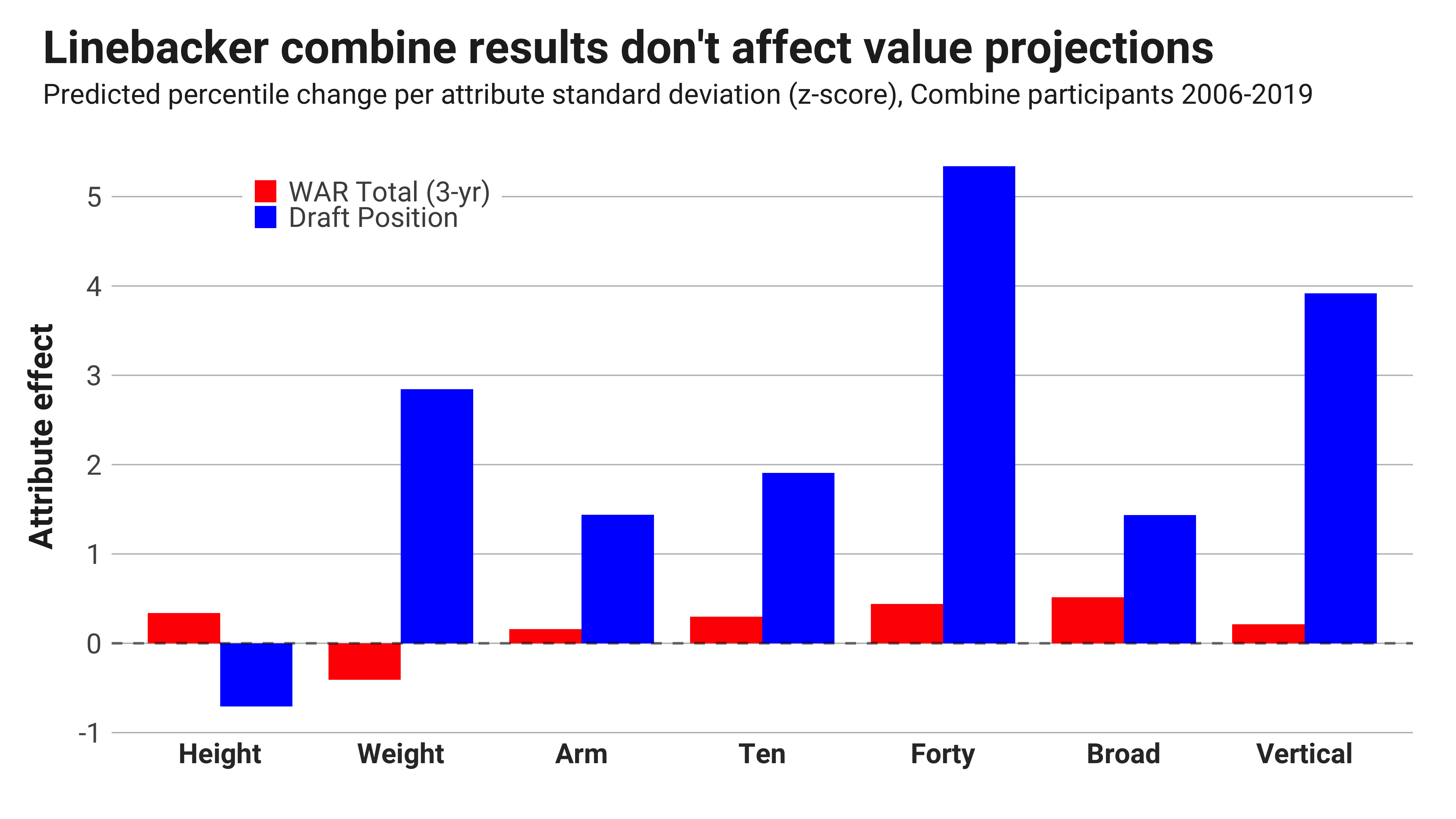 I removed the agility drills from the model for linebackers, which leaves only tiny attribute effects for projecting NFL value in terms of PFF WAR. The 40-yard dash and vertical jump are still relatively influential on draft position, but they could be overvalued traits if not combined with good coverage instincts, which is becoming more important at the position. 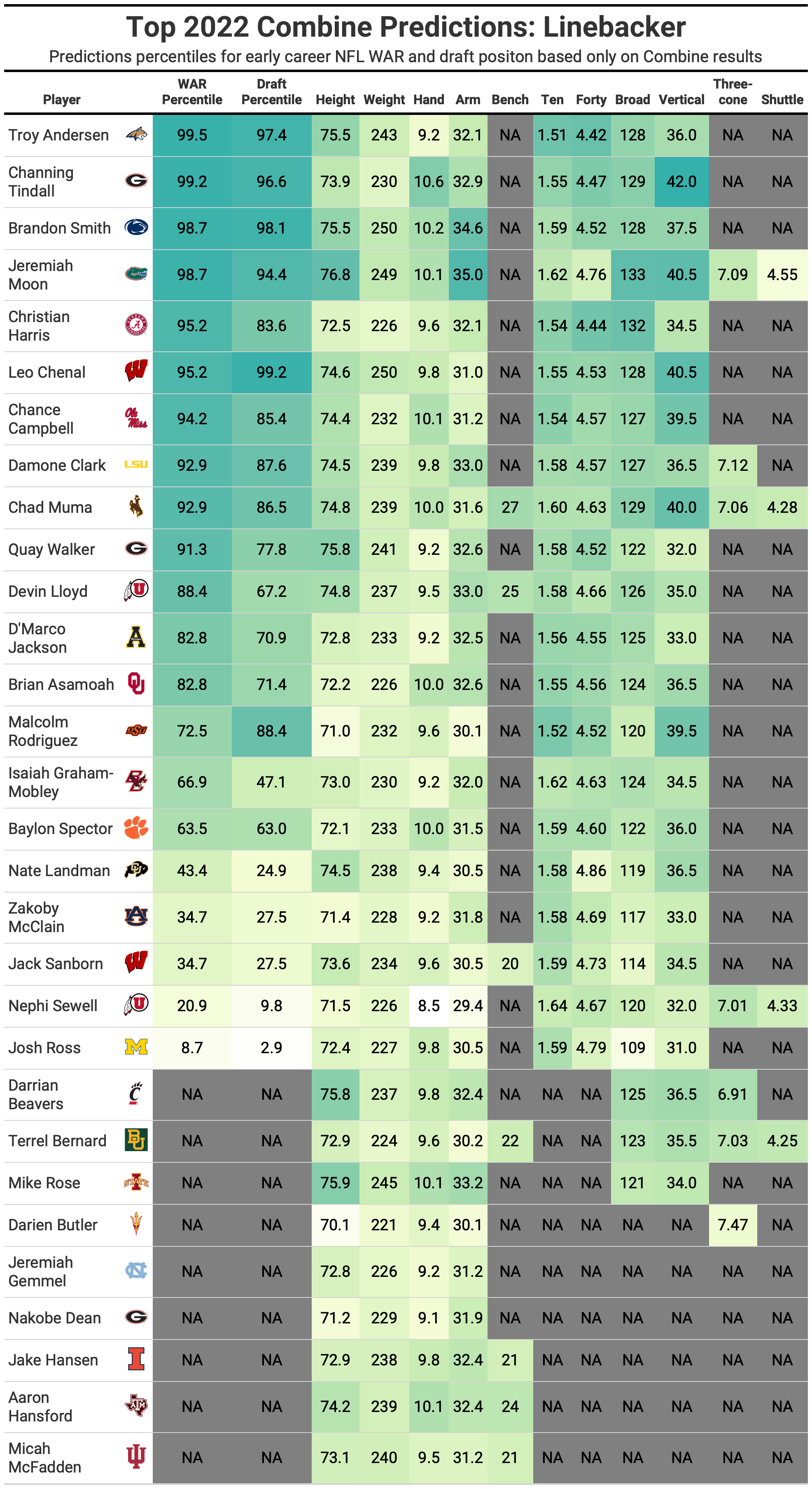 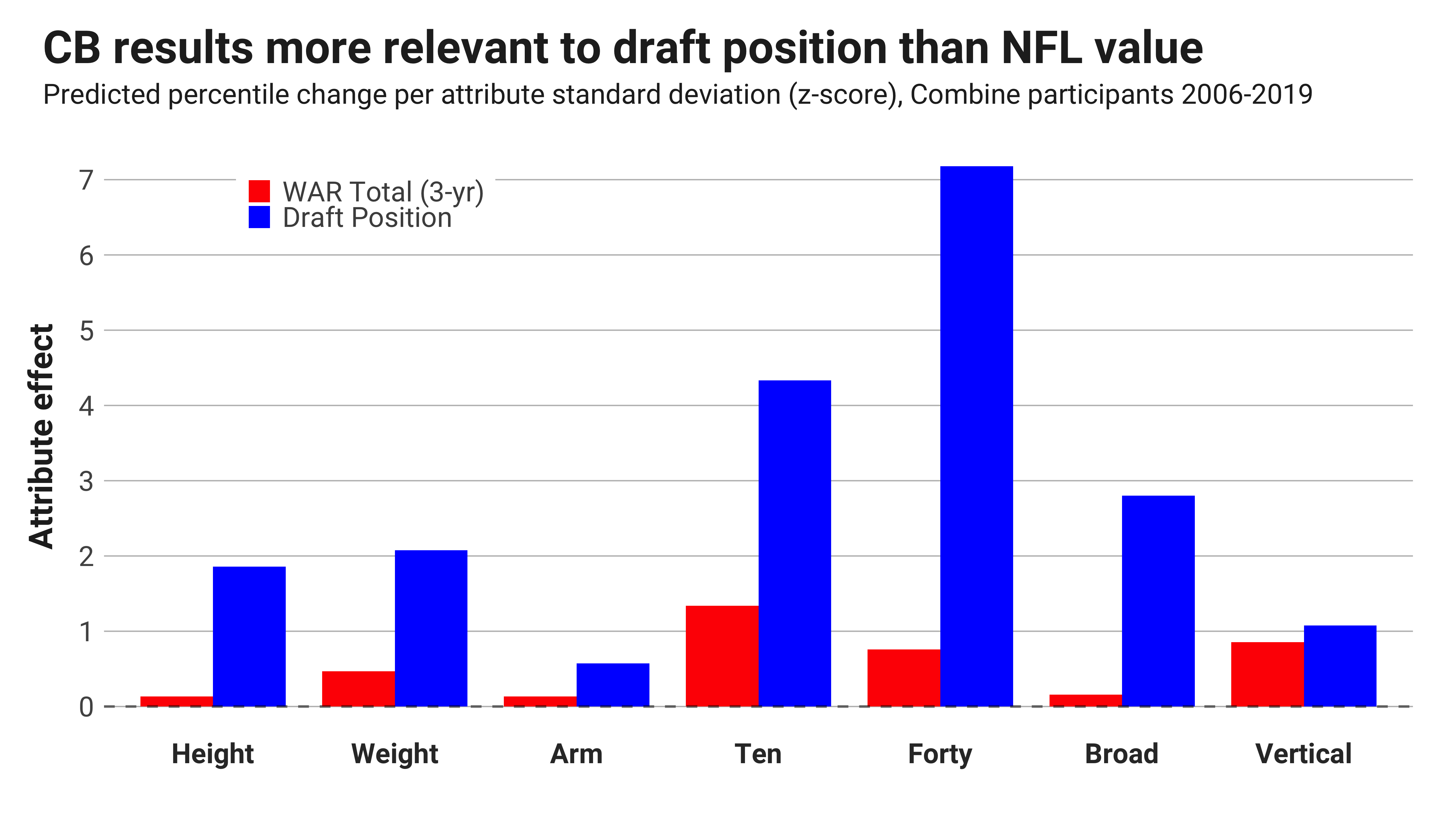 Unfortunately, there were a lot of cornerbacks who only ran sprints and didn’t participate in any of the explosion or agility drills. I could have limited the modeling only to measurements and speed, but I decided to keep the jumps — in particular, the vertical jump, which is the second-most significant measurement.

Tariq Woolen was the star of the combine among cornerbacks, posting the best WAR and draft scores in our database at the position. Woolen recorded the best weight-adjusted 40-yard dash time in our database of 400 combine participants. Woolen also had the best vertical jump of this combine. He was the CB9 in recent mock drafts but should now move up a few spots on teams’ boards. 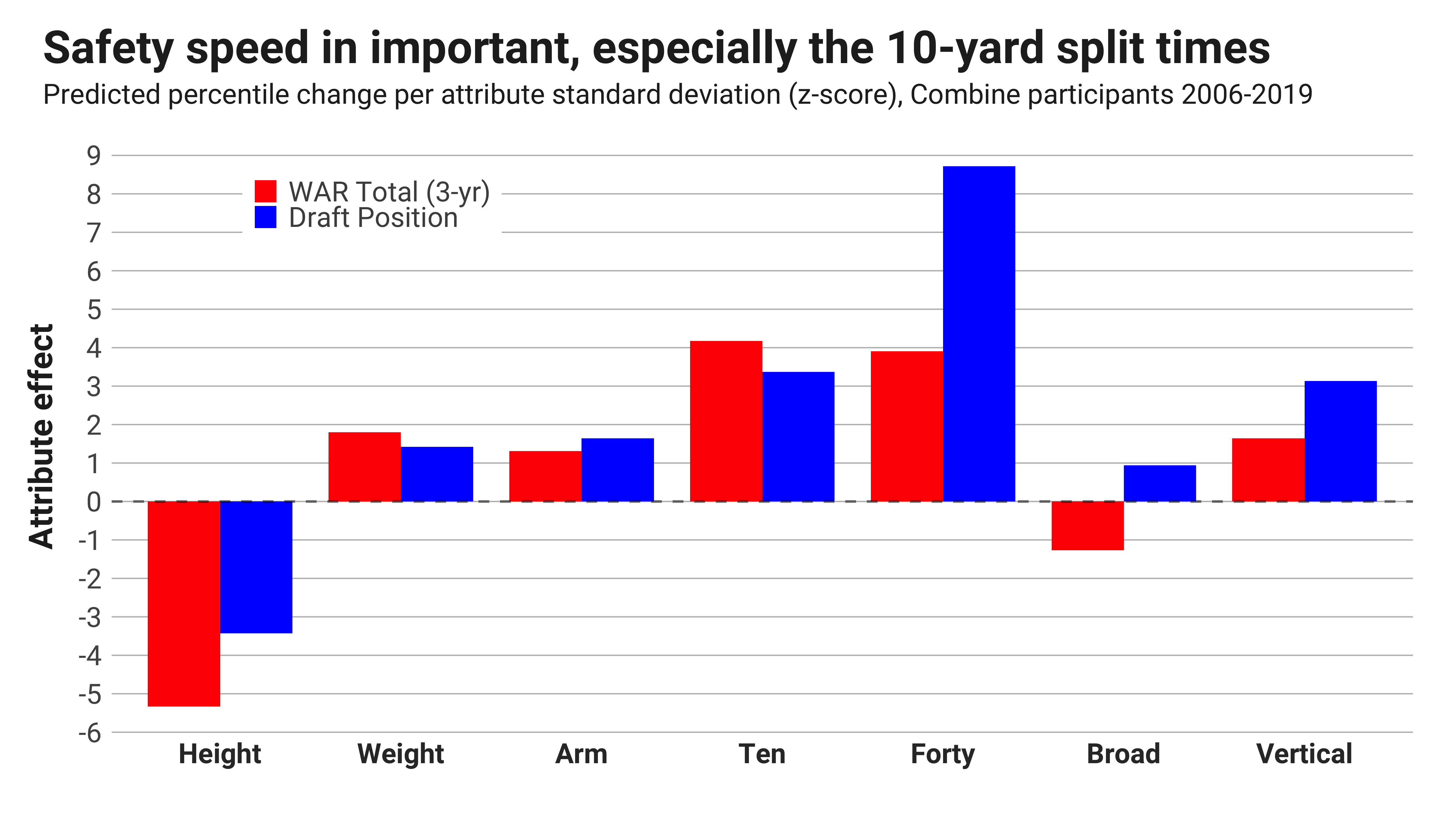 One of the more surprising takeaways from the previous historical investigation into combine importance was the significance of speed for safeties, and that holds true here when removing agility drills from the model. The attribute effects are much greater for safeties than some other positions, with the 10-yard split being more important for WAR projection than the entire 40-yard dash.

Possible top-five pick Kyle Hamilton had the worst combine performance according to our projections, with his taller and lighter frame a negative, in addition to a 40-yard dash time that was slightly slower than his weight-adjusted expectation. Hamilton scored well on drills that don’t show much correlation with PFF WAR, including the broad jump, vertical jump and agility drills. I’d take Hamilton’s poorer WAR projection with a grain of salt, as he’s clearly a top-tier athlete and his tremendous draft position will be much more important for projecting him into the NFL. 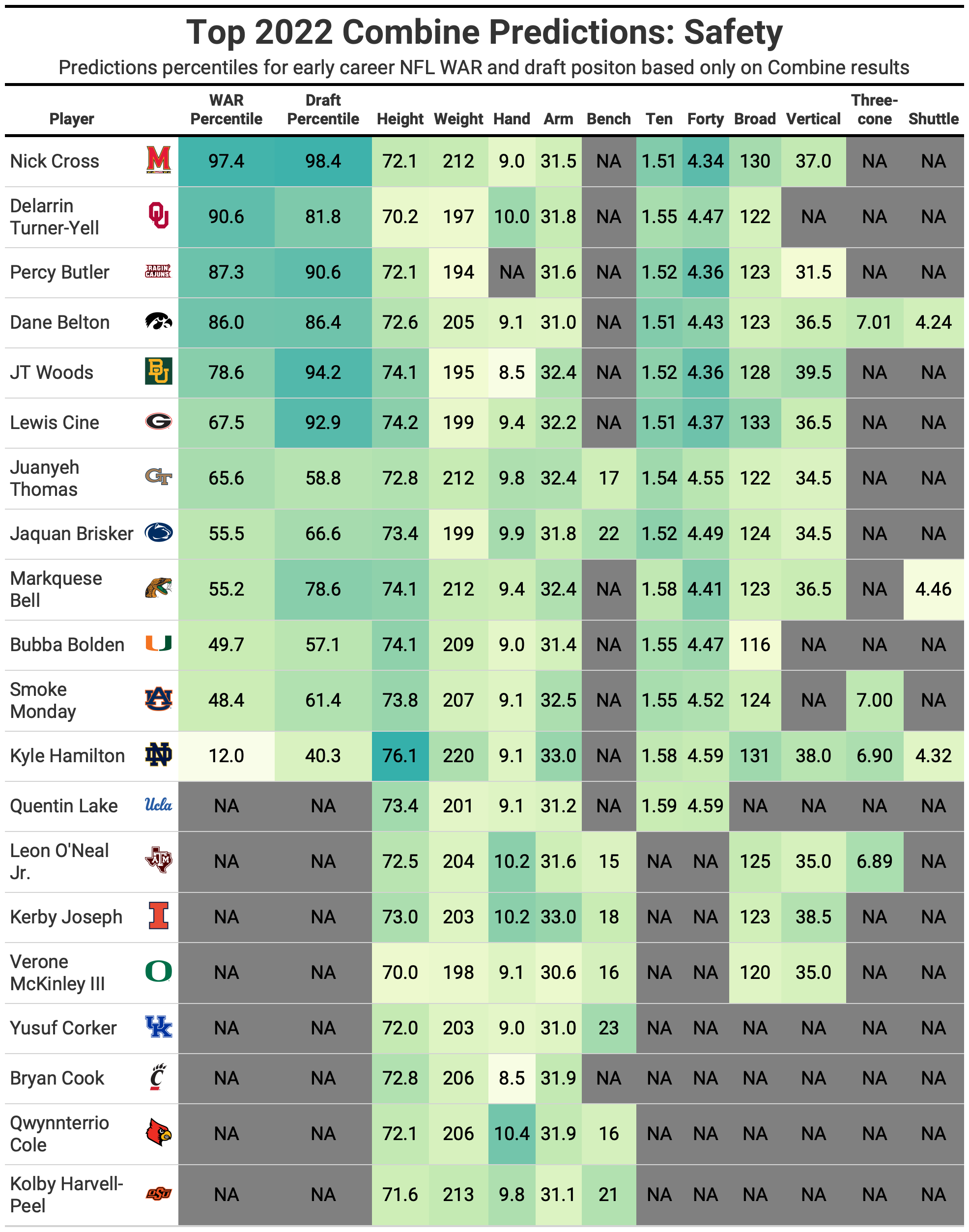