When you just look at how players like Myles Garrett, Jadeveon Clowney, Khalil Mack and Chase Young are built, it’s hard to see how offensive linemen stand a chance. They look like they were put on this planet to blow by and through offensive tackles and politely introduce the opposing quarterback to the turf. They’re some of the freakiest athletes on the football field. This hit below by Clowney in the 2013 Outback Bowl is over seven years old at this point, but it still gets brought up when talking about the No. 1 overall pick in the 2014 NFL Draft.

It highlights the type of athlete that is increasingly coming out of college at the edge defender position. Offensive tackles are impressive athletes in their own right, but they don’t have the same kind of athletic profile as their counterparts on the edge, sacrificing explosiveness for an extra 50 pounds on average. The table below shows the average combine results from 2006 to 2019 for edge defenders and tackles who played at least one regular season pass-rushing or pass-blocking snap in the NFL over that span, courtesy of Pro Football Reference. 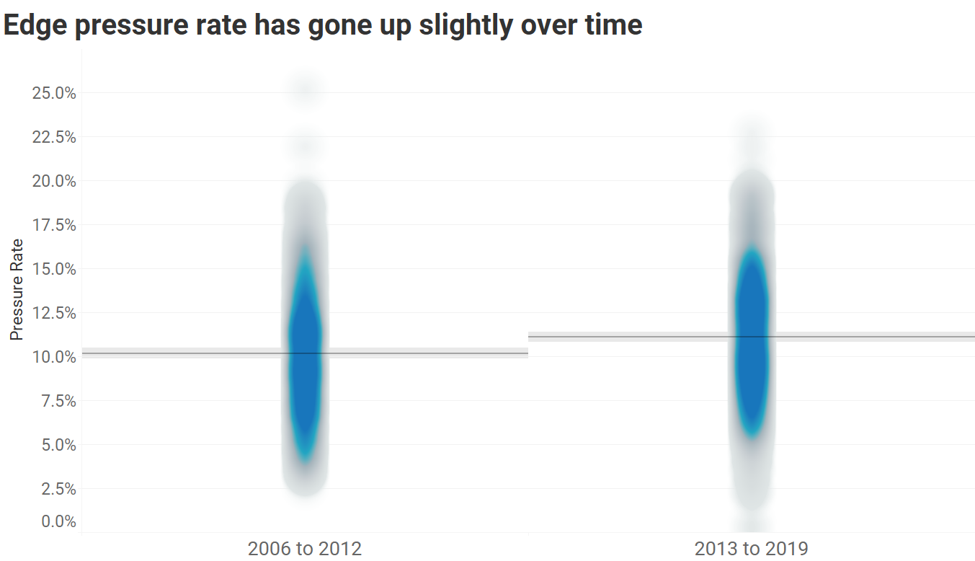 The density plot above is every pass-rushing season from an edge defender who recorded 100 or more pass-rushing snaps since the PFF era began in 2006, grouped into two bins (2006-2012 and 2013-2019). It may not look like a massive difference at first glance, and that’s because it isn’t one. The confidence intervals show, however, that edge defenders have gotten pressure at a significantly higher rate on average over the past seven years as opposed to the seven before that. The average percentage difference comes out to about 1% (10.2% in the first group compared to 11.1% in the latter), or an 8.8% increase over the second half of the PFF era.

Obviously, there are other factors that come in to play when looking at that increase in pressure rate, but it’s hard not to see the growing athletic gap between edge defenders and the players primarily tasked with blocking them as being toward the top of the list. That’s part of what made the results from the offensive tackles at this year’s Combine so promising. There are guys at the top of this tackle class who can help bridge that gap.

The table above shows the Combine results from PFF’s top five tackles in the class compared to the average results over the last 14 years pulled from the prior table. Except for Thomas’ and Jones’ 40-yard dash and Wills’ 20-yard shuttle, all five guys beat the positional average in every drill they ran.

The strong testing numbers were to be expected, especially from Wills and Wirfs. PFF’s lead draft analyst Mike Renner categorized Wills as “one of the most explosive and agile offensive tackles you’ll ever see” and Wirfs as “not only physically dominant, but so damn smooth as well” in the PFF Draft Guide. Let me tell you, folks — those two did not disappoint.

Wills pushed a 5.0-second 40-yard dash while beating out the positional average broad jump by nearly 10 inches and vertical jump by just over six inches. That kind of explosion is not something you generally see out of a guy listed at 6-foot-4 and 312 pounds.

Somehow it was overshadowed, though, by the display that Wirfs put on. He managed to broad jump over 10 feet, post a vertical of better than 36 inches and run a 4.85 40-yard dash, all at 320 pounds. Everyone knew that Wirfs was a unique athlete coming into the Combine, but whew, those are some all-time numbers at his size.

Among the 446 players to weigh in at 315+ pounds at the Combine, here’s where @HawkeyeFootball OL Tristan Wirfs stacks up:

By comparison, the numbers from Thomas and Jones look rather pedestrian, but it was still a strong week for them. Then, there's Becton, the 6-foot-7, 364-pound mountain of a man who came out and ran a 5.10-second 40-yard dash. He didn’t participate in any of the jumps or agility drills, but frankly, he didn’t need to. The ability to move that fast at that size is going to have tackle-needy teams drooling at the top of the draft.

Ezra Cleveland out of Boise State is worth a shout, as well, after leading all tackles with a 7.26-second three-cone drill and a 4.46-second shuttle while breaking the 5.0-second threshold in the 40-yard dash (4.93). Even Austin Jackson out of USC — a guy who PFF is lower on than consensus — tested out at an extremely high level for his size in Indianapolis.

These guys don’t just have the athletic profiles of plus-starters in the NFL. They also have the grading profile at the college level to back it up. Thomas (92.4), Jones (93.2) and Wirfs (91.3) all graded out at 90.0 or better during the 2019 season; Wills (86.9), Becton (81.3) and Cleveland (82.5) were all at 80.0 or higher. The top end of this tackle class has the potential to be historically strong, and their testing numbers show that they should be well suited athletically to deal with the increasingly difficult task of blocking NFL-caliber edge defenders. That is something the NFL could use more of.