No year in college football will be more memorable than the one we are experiencing now, as the impact of COVID-19 has forced most colleges to cancel the 2020 fall football season with the hope of trying to play in the spring.

We aren't here to give you our opinion on whether they should or should not have played in the fall, nor are we going to do that with their attempt to play in the spring. Instead, we want to shine a light on the players who deserve credit for the performances they have put forth over their college careers.

Without further ado, we present what would have been the 2020 PFF College Preseason All-SEC Team.

Newman made the most of his less-than-ideal situation at Wake Forest this past season, as he earned an 85.7 passing grade that ranked 15th in the FBS. He can pick apart defenses through the air and on the ground, but the former is what Wake didn’t take advantage of and what Georgia will. His receiving unit lacked any separators, forcing him to throw into a tight window at the highest rate in the country last year. Yet he managed to rank second in tight-window passing grade to only Joe Burrow. With a better scheme and supporting cast at Georgia, Newman is bound to take his already great play to new heights.

Harris doesn't have elite speed, but that's not going to stop him from racking up explosive gains. Over the last two seasons, Harris has picked up a gain of 10-plus yards on 22.7% of his carries, the third-highest rate in the FBS and far and away the best rate in the SEC. It doesn't matter whether it's college or pro when it comes to running backs, we want to see them be a threat in the passing attack, and Harris certainly qualifies. He caught 27 of his 28 catchable targets for 304 yards and seven touchdowns (five of which came in the red zone) while breaking 11 tackles after the catch last season.

While he might not see a plethora of carries in Mike Leach’s Air Raid offense, Hill has been a top-tier ball carrier over the past two seasons and ranks among the 10 best in the FBS in PFF rushing grade over that period. What matters most in the Mississippi State new look offense is his receiving ability, and Hill has been reliable in that facet. Hill has seen only 56 targets in his three-year career, but he's averaged 10.7 yards after the catch per reception while breaking 16 tackles on his 44 catches.

Chase is one of the most physically imposing wide receivers you'll see and has a combination of elite body control, sure hands and reliable contested-catch ability that can't be touched. Chase earned an FBS-high 91.2 receiving grade and had six more catchable targets without a drop than any other Power 5 wide receiver when working against tight coverage last year (22)

Smith can do almost everything at the wide receiver position at a high level, but his release package is the big reason why he's a top-10 player in college football. Smith produced 4.30 yards per route run against press coverage in 2019, over half a yard more than any other returning Power 5 receiver. This great skill set helped him hang 211 yards on Derek Stingley Jr. in the infamous Alabama vs. LSU matchup this past year.

Waddle’s speed is on the level of his former teammate — and now Las Vegas Raider — Henry Ruggs III and helps make him a perennial deep threat as well as a monster after the catch. Since 2018, Waddle has hauled in 15 of his 19 deep targets and has a catch rate that is 10 percentage points higher than any other Power 5 receiver. In that same span, he averaged nearly 10 yards after the catch per reception and produced the country’s highest rate of targets resulting in a 15-plus yard gain.

Pitts moves differently for a guy of his stature and can handle single coverage as well as any tight end in the country. He actually had 11 explosive plays of 15-plus yards against single coverage last year, which was three more than any other Power 5 tight end.

After playing relatively average at guard for the Crimson Tide in 2018, Leatherwood pivoted back to left tackle in 2019 and found immense success. He allowed multiple pressures in a single game just once last year, en route to a 2.2% pressure rate allowed (ranked ninth among Power 5 tackles).

Now with a clean bill of health, Smith is among the top guards in the game. When matched up against SEC defensive linemen last year, Smith was the highest-grade guard in the conference.

Jackson has been a wall in pass protection throughout his collegiate career and came around as a run-blocker last year. He owned the lowest rate of negatively graded blocks among Power 5 centers, progressing into one of the best at the position.

Cleveland has logged just under 700 snaps at right guard the last two years (started in just four games in 2018 before getting hurt, split time with Cade Mays in 2019) and has been a stout pass-protector in that span. He didn’t allow a single sack or hit on the quarterback on 304 pass-block reps, en route to an 84.6 pass-block grade.

It’s really not even a debate that Kentucky has one of the top three best run-blocking tackles in the country in Kinnard. He produced an 89.1 grade in that facet last year, trailing only Oregon’s Penei Sewell for the top spot among tackles who were set to return this year.

[Editors Note: PFF's customizable NFL Mock Draft Simulator gives you the opportunity to be the GM of any team and is now updated with a select group of 2021 prospects] 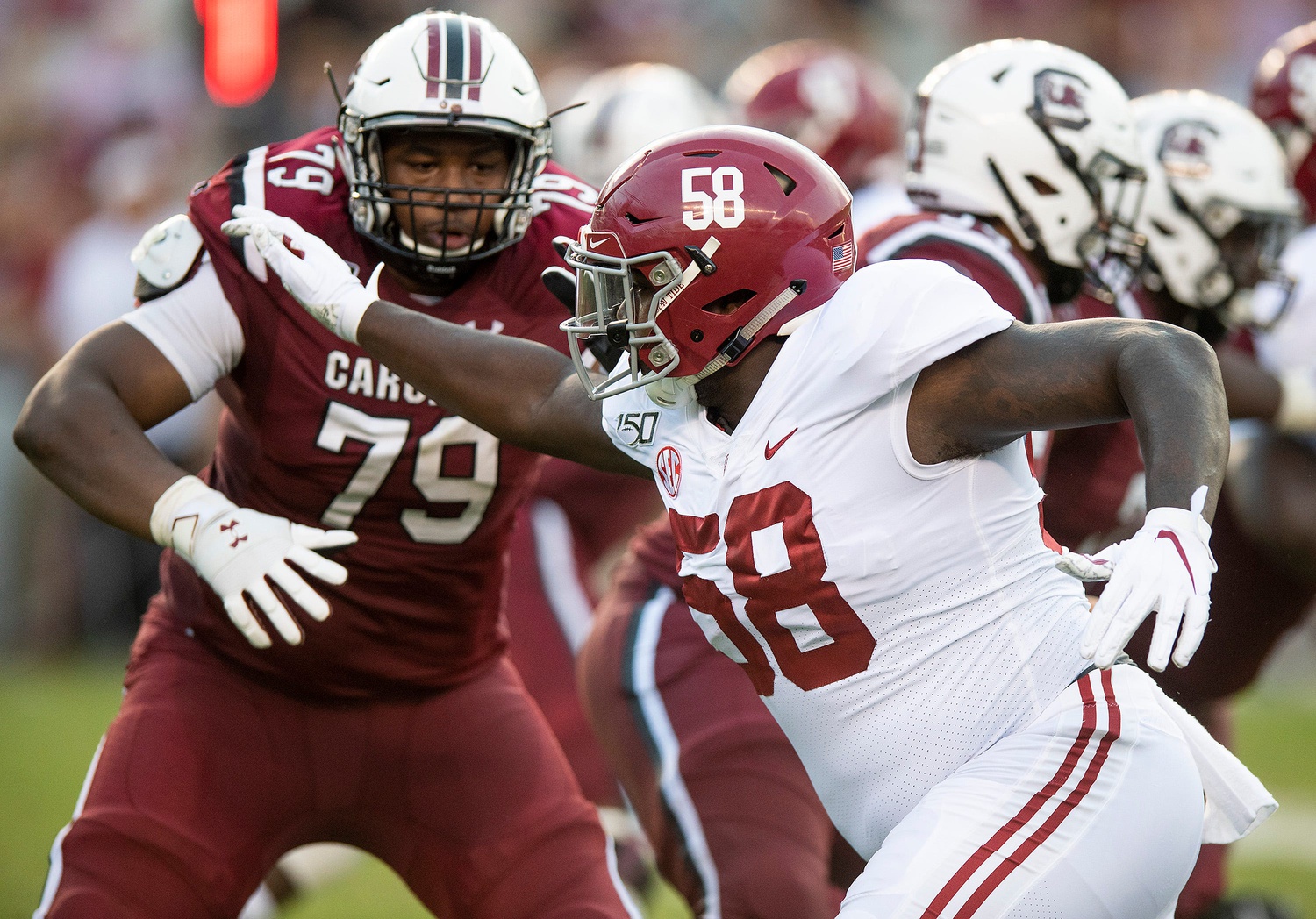 Barmore might have only 269 college snaps under his belt, but we’ve seen more than enough to know he’s one of the best players at his position in all of college football. He was productive both against the run and as a pass-rusher on those limited reps, leading the way to an 87.8 PFF grade. As a pass-rusher, Barmore won a whopping 20.8% of his reps and generated a pressure 16.5% of the time — marks that would have both led the position by a considerable margin if he had enough snaps to qualify.

Whiteside produced a solid 78.8 pass-rush grade in 2019, 18th among 182 Power 5 interior defensive linemen — and he did that while playing nearly 60% of his snaps at 0/1-technique. Looking at reps at that specific alignment only, no Power 5 player who was set to return posted a higher pass-rush grade (79.7) or pass-rush win rate (16%) in 2019. His get-off is truly special for a 310-pound man, and when you pair that with his raw power, interior offensive linemen get beaten.

After flashing dominance in a limited role in 2018, Herring saw a huge breakout in 2019 as he earned a 90.5 PFF grade that tied for third among all Power 5 edge players. He was actually the only one among that group to produce grades above 85.0 as a pass-rusher, tackler and in run-defense. Ignore the sack total here — Herring is the real deal.

Watson has been one of the most productive pass-rushers in the SEC over the last couple years. He has rushed the passer 328 times since 2018 in his hybrid role and generated a pressure on 22% of those, forming the highest rate among Power 5 edge players.

Bolton had a big-time breakout campaign in 2019. After logging 101 snaps as a true freshman in 2018 and struggling (57.5 PFF grade), he came back in 2019 as a starter and earned a 91.1 PFF grade that ranked third in the FBS. Bolton combined for 10 plays made on the ball in coverage, second to only Isaiah Simmons for most by a Power 5 off-ball linebacker. That type of production is rare to see from an SEC linebacker.

Britt is one of the top run-stuffing inside linebackers in all of college football. In fact, his 89.8 run-defense grade in 2019 tied for seventh among FBS linebackers and first among those in the SEC. He’s not much of a playmaker in coverage, but Britt won’t make many mistakes, either. 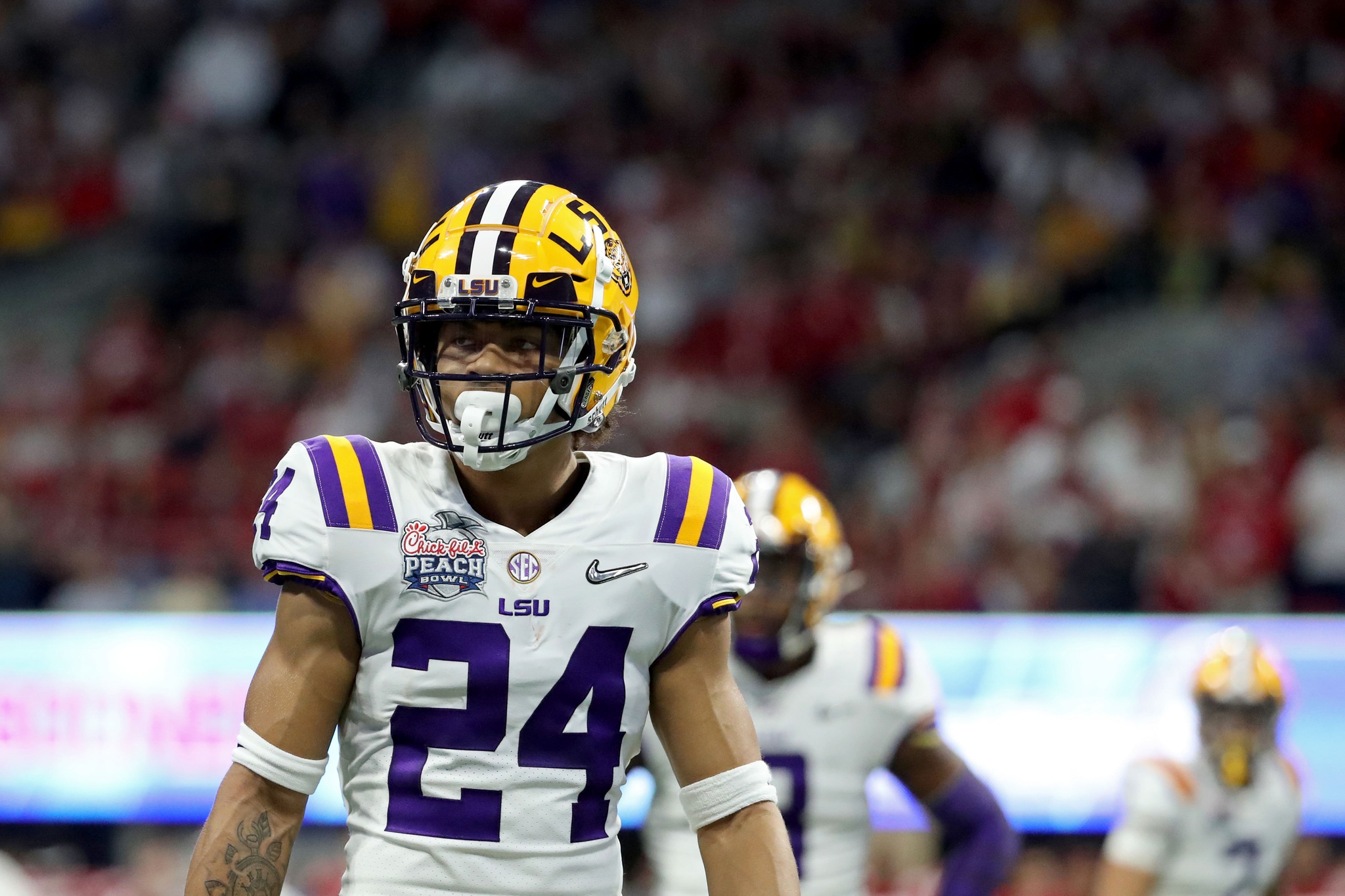 It's well-known at this point how great Stingley was in his 2019 true freshman campaign. He had not only the most valuable cornerback season last year but also the most valuable non-quarterback season we have seen in the PFF College era. Stingley recorded a whopping 21 combined pass breakups and interceptions, seven more than any other Power 5 corner. He’s a ridiculous athlete — so much so that head coach Ed Orgeron has publicly contemplated giving Stingley snaps on the offense. He’s just getting started and has an incredibly bright future ahead.

Surtain has been one of the SEC’s premier cornerbacks ever since he stepped on the field as a true freshman in 2018. When lined up at outside corner since then, he’s earned an 89.1 coverage grade while allowing just 0.69 yards per cover snap to SEC offenses. For perspective, 0.69 yards per cover snap allowed by a cornerback in 2019 would have ranked among the top 25 in the country.

LeCounte has the range you want in a deep safety. His coverage grade at free safety since 2018 is the seventh-best in college football, and his five INTs at the alignment are tied for fourth. Overall, he is coming off back-to-back years with a PFF grade of 80.7.

Davis shined in coverage no matter where he was on the field. Davis manned the slot for 101 coverage snaps and was battle-tested, seeing 20 targets come his way. He responded by picking off three passes and breaking up four.

Florida’s most valuable player of the 2019 season wasn’t C.J. Henderson or Kyle Trask; it was Elam, the true freshman corner who barely played 300 snaps. He consistently wins the leverage battle downfield and has plus instincts and length for the position. With that, he came away with six combined pass breakups and interceptions while allowing only 10 catches on 23 targets. Elam ended up earning an 87.8 PFF grade for the year, the fourth-best we have ever seen by a true freshman cornerback.