The All-MAC selections below are headlined by the first team with the second team listed below each position. 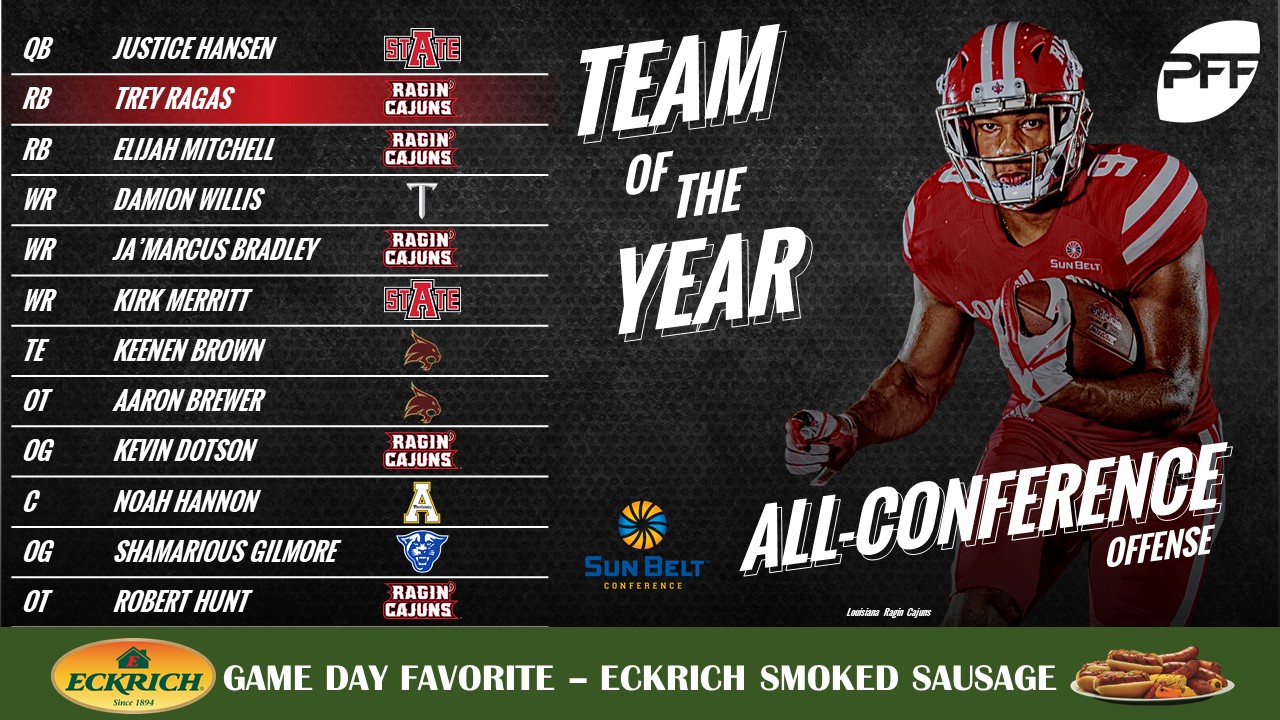 Hansen dominated the conference in yards, touchdowns and completions while having the most drops by his receivers. He succeeded under pressure as well, with an adjusted completion percentage of 67.7% when pressured.

Ragas was nearly untouchable with 62 total forced missed tackles this year. His 5.7 yards per carry is more impressive when you consider that 4.15 yards came after contact this season.

Mitchell was the lighting in the Louisiana backfield with a breakaway percentage of 54.3% for the season. He also added 342 yards receiving and receiving grade of 91.1 to compliment 15 total touchdowns.

Had a conference-best 3.51 yards per route run among qualified receivers.

Led receivers in the conference with 10 touchdowns on 34 receptions as he was a deep threat as well, catching 47.1% of his deep passes targeted at least 20 yards downfield.

Merrit led the conference in targets (97), catches (74) and yards (922), primarily from the slot. He forced 23 missed tackles on receptions, which was nearly double the next receiver in the conference.

No tight end had the success Brown did after the catch this year as he more than doubled the next closest tight end with 24 missed tackles (Trevon Wesco had 11 to finish second). He also finished with the seventh-highest run-blocking grade among FBS tight ends.

Brewer allowed only one sack all season while amassing the second-best pass-blocking grade in the conference at 86.2, splitting time between tackle and center.

Dotson allowed four pressures all season to go along with a conference-best run-blocking grade of 74.4 among guards.

Hannon was the third-highest graded offensive linemen in the Sun Belt regardless of position this season and had the second-best run-blocking grade in the conference of 76.4.

Gilmore played more snaps at guard than all but one other player in the conference this season and only allowed seven pressures.

Hunt allowed only one sack and one hit this season on 374 pass-blocking snaps for the conference's best pass-blocking efficiency mark at 99.0.. 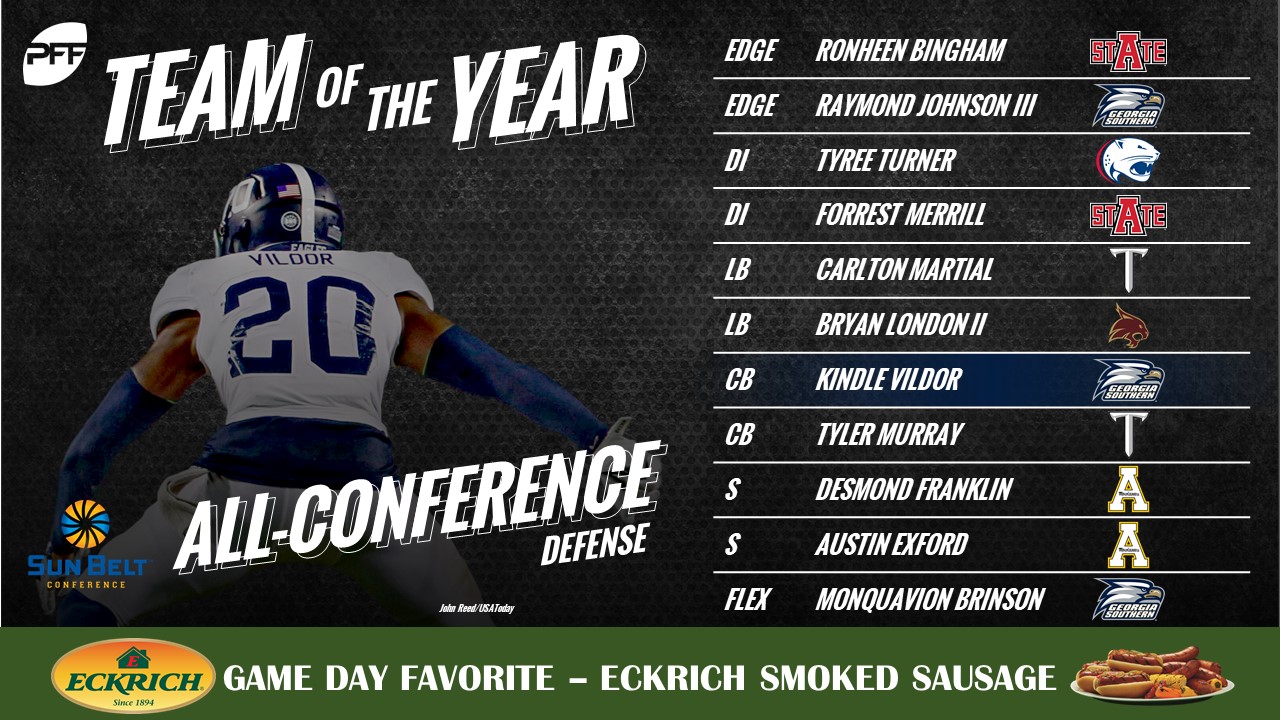 Bingham shined as a pass-rusher this year with 61 total pressures, which was almost double the next closest edge defender in the Sun Belt.

Johnson III had a well-rounded season this year with 33 pressures to go along with 22 defensive stops.

Turner put up an elite grade against the run this season at 87.1 and led interior defensive linemen with a run stop percentage of 9.7%.

Merrill he was an effective run defender with 31 stops on 36 tackles against the run this year.

An elite run-defense grade paired with good tackling and a pass-rushing productivity grade of 12.8 (second in the conference) led to an elite grade for the season for Martial.

London shined brightest in coverage with a coverage grade of 85.6 as he also led all linebackers with 96 tackles and 67 defensive stops.

Vildor put up elite numbers in coverage, allowing a reception on just over 50.0% of targeted passes and a passer rating of 49.6 when targeted. He recorded four interceptions (most) and had no penalties called against him this season, leading to his selection as Second-Team All-American at cornerback.

Murray did not grade below 75.0 in any defensive metric this season. His passer rating when targeted of 54.9 was third best among cornerbacks.

Franklin allowed just 0.31 yards per snap in coverage to pair with four interceptions. His passer rating when targeted (38.4) was the best regardless of position in the conference.

Exford missed only three tackle attempts all season while allowing only nine yards per reception, the second-best mark in the conference.

Brinson's elite tackling grade of 89.3 and run-defense grade of 90.4 are more impressive when you consider that he's only 180 pounds.

Bass was perfect on extra points while also knocking home a conference-best 88.9% of his field goals, including a perfect 7-of-7 from 40-49 yards out.

Grace averaged a ridiculous 4.22 seconds of hangtime and allowed his coverage team ample time to actually allow negative yardage on punt returns this year while he knocked 25 inside the opponent's 20-yard line.

Minter leads the conference with 712 yards on kick returns as he averaged 24.6 yards per attempt.

Hart fair caught 31 kickoff attempts but when he got his chance on punt returns, he did his damage to the tune of 17.3 yards per return.