The nation's top-graded true freshman at every offensive position, through Week 11

With our release this week of how every 5-star recruit has graded to date, it got us thinking about how well other true freshmen that may not have received a 5-star billing coming out of high school have graded this season. Some true freshmen have dominated action this year when given the shot and today, we outline the top-graded true freshman at every offensive position through 11 weeks of action. 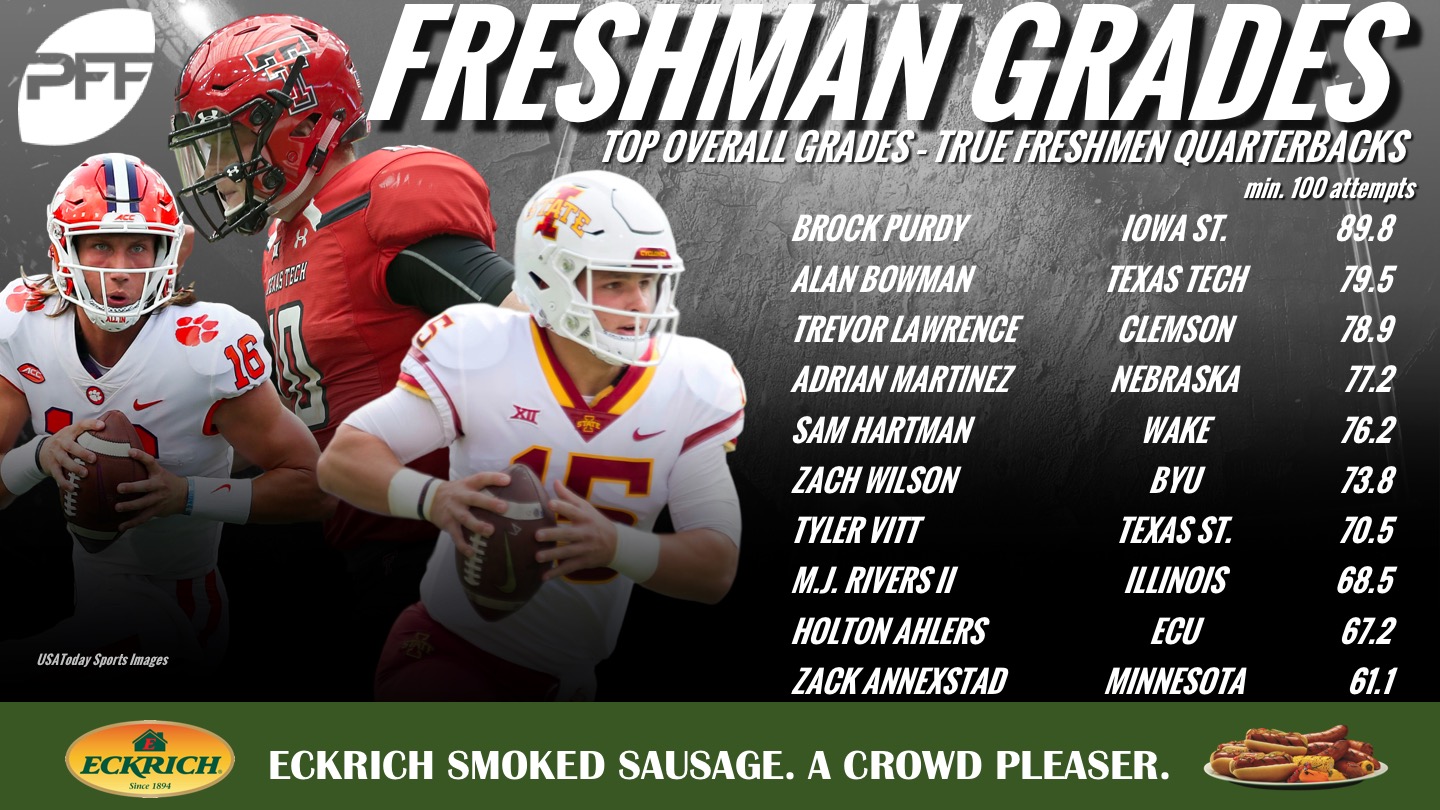 Purdy has been officially handed the torch in Ames, and in four starts this season, has given Cyclones fans wins against West Virginia, Texas Tech, at Kansas and against Baylor. He has not graded lower than 73.3 in a single game and is coming off his best career game against Baylor where he finished with a 91.8 overall grade. He's handled pressure better than most quarterbacks, currently holding a 93.7 grade when pressured as he's completed 23-of-37 passes for 429 yards and 6 touchdowns against no interceptions.

Purdy's 141.8 passer rating when pressured is the best mark in the nation among qualified signal-callers. 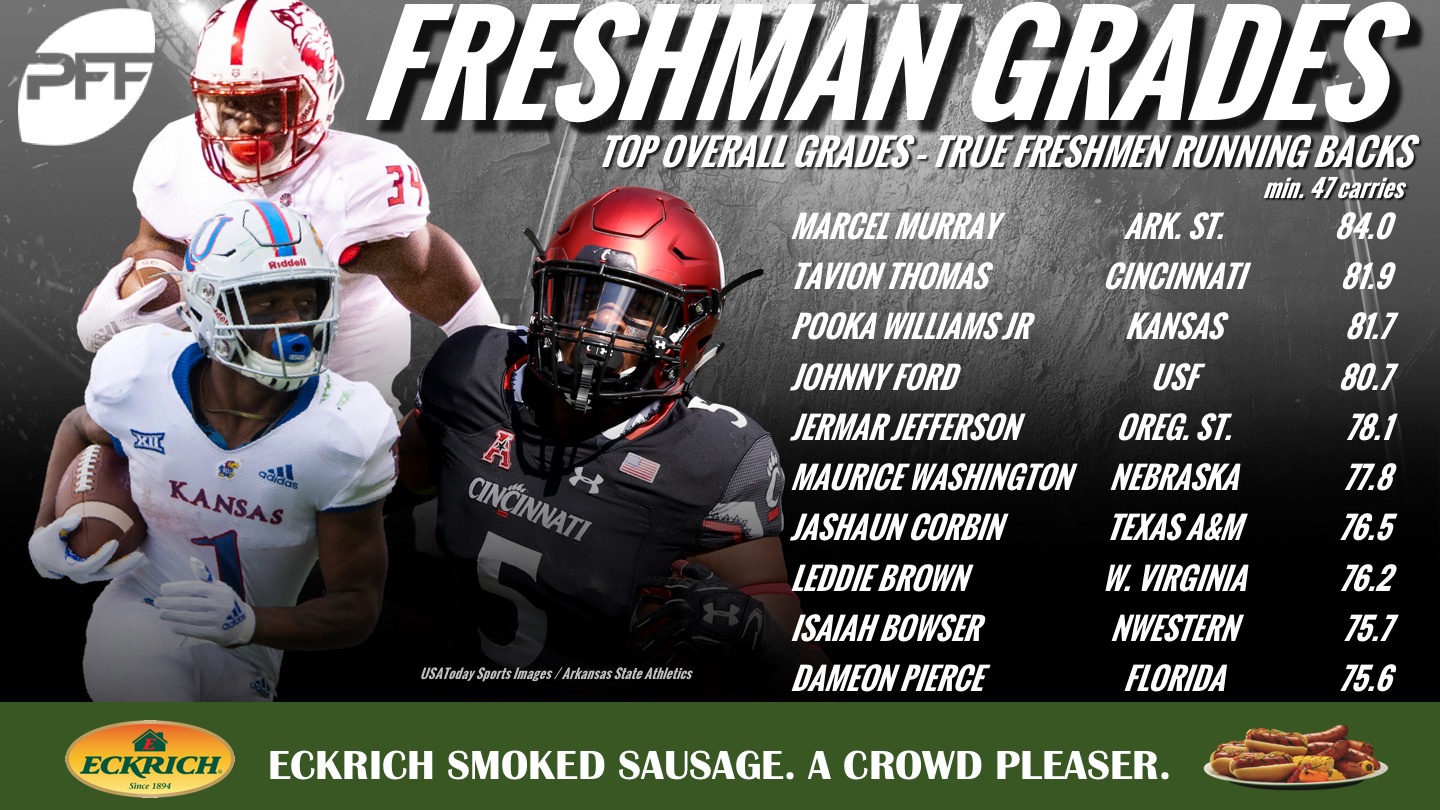 Murray has toted the ball 104 times this season for the Red Wolves, forcing 29 missed tackles on those carries and gaining 439 of his 640 rushing yards after contact. He has scored seven touchdowns and accumulated 27 more first downs on his carries as he averages 4.22 yards after contact per attempt.

He has also chipped in with another 13 receptions for 134 yards and two more scores. He's forced six additional missed tackles after the catch to give him 35 total missed tackles forced this year. 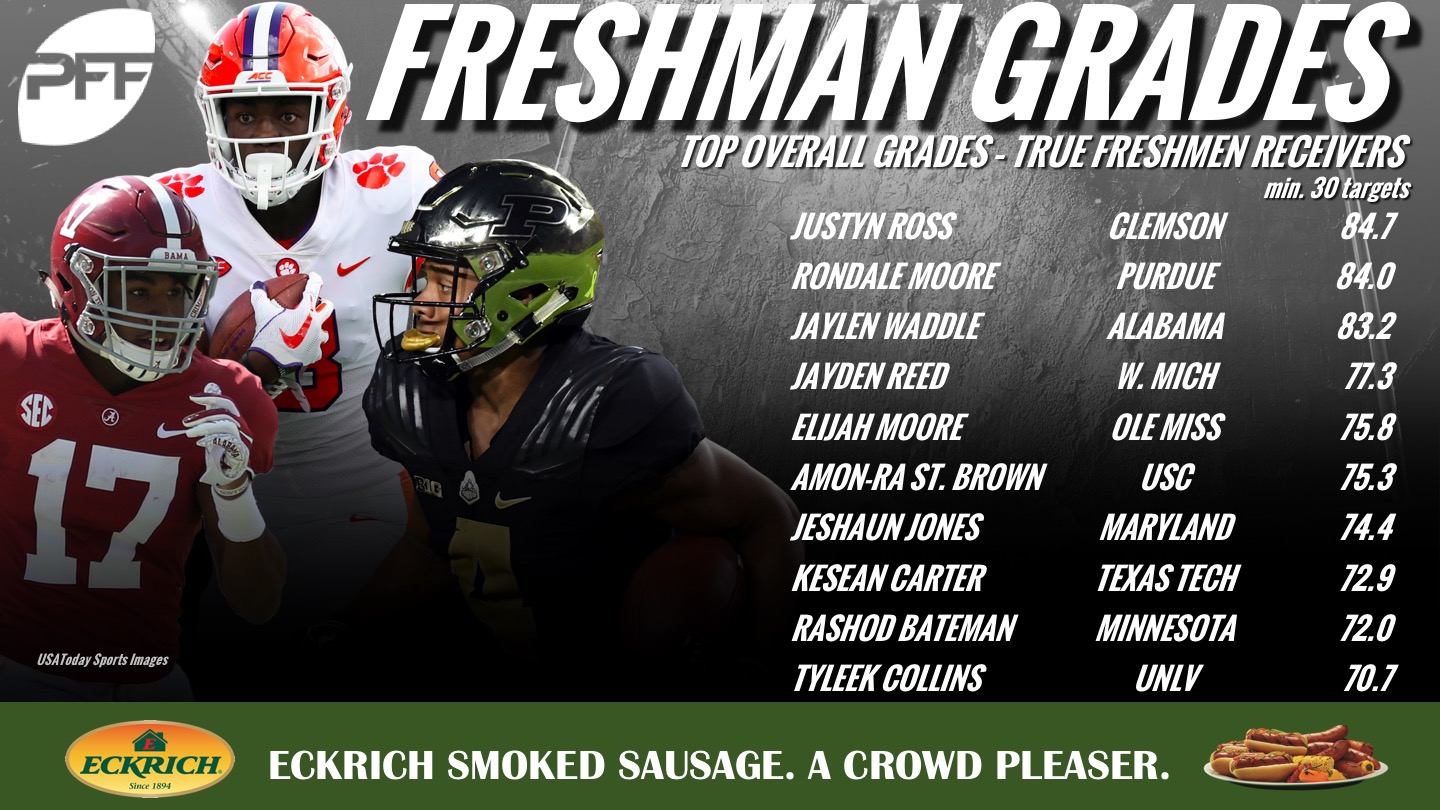 Ross leads the nation with an absurd 4.33 yards per route run this season, hauling in 495 yards on 25 receptions. He's forced seven missed tackles and 17 of his 25 total receptions have either gone for a first down or a touchdown. He averages 8.9 yards after the catch per reception, pacing all the nation's true freshman receivers.

Kuithe and teammate Cole Fotheringham top the list here as Kuithe leads the two with 17 receptions for 191 yards. He's gained 113 yards after the catch, good enough for second among freshman tight ends. He's forced two additional missed tackles after the catch and nine of his receptions have either gone for a touchdown or first down.

Sewell's regular season likely came to an end after suffering a high ankle sprain against Washington but he may be able to return for the Ducks' bowl game at this point. Regardless, Sewell started the first six games of the season and was absolutely dominant. He allowed just five pressures across 179 pass-blocking snaps and also led all freshman tackles with his 75.6 run-blocking grade.

Mays has been thrust into the lineup for the Bulldogs across the line, logging 179 snaps at left tackle but the majority of his total snaps this season (312) have come at right guard. In pass protection, he's allowed just nine pressures on 217 pass-blocking snaps but his run-blocking prowess has separated him from his freshman counterparts. His 76.0 run-blocking grade is 9.0 grade points higher than the next closest player in their debut season.