Leading the charge for the Heisman Memorial Trophy, Alabama QB Tua Tagovailoa has had by all accounts, an incredibly successful season. What he has done as the team's starting quarterback has been nothing short of remarkable as he has reached Week 7 with a 21:0 TD:INT ratio, throwing 21 touchdowns compared to just 35 total incompletions.

While Tagovailoa and the Alabama pass-catchers dominate on offense, the Crimson Tide are well-represented across the board on both the first and second team on the Midseason All-SEC Team, selected by our team of analysts.

The PFF Midseason All-SEC Team is brought to you by Eckrich, the Official Smoked Sausage of the College Football Playoff.

With that in mind and Tagovailoa's Heisman candidacy in hand (more on that on Wednesday), here are the Midseason All-Conference players at every position: 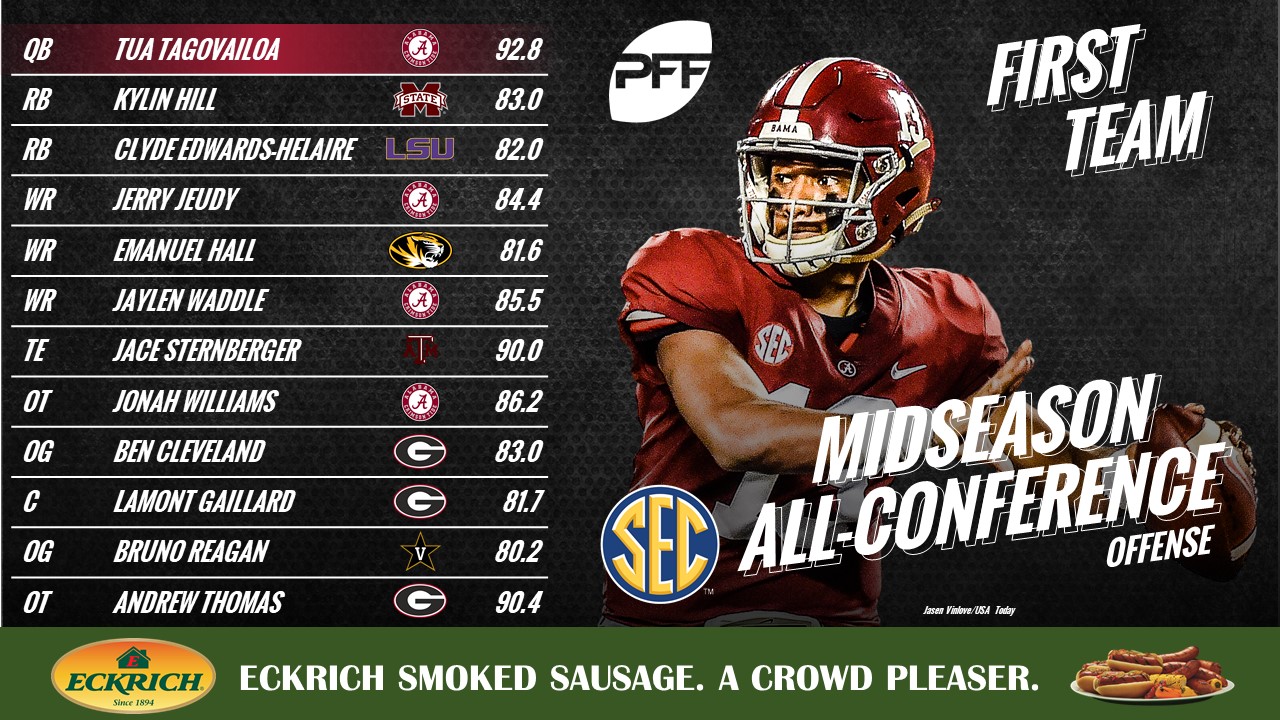 Tagovailoa has been even better than anticipated before the season began, completing passes at a high rate and even fielding the nation's highest passer rating from a clean pocket (158.1).

Hill has forced 22 missed tackles this season, en route to the highest rushing grade among SEC running backs. He's averaging 4.62 yards after contact per carry on his 68 rushing yards, gaining 314 of his 474 yards after first contact.

Edwards-Helaire has been integral in LSU's victories this season, leading the conference with 29 missed tackles forced on carries. He has accumulated five touchdowns and an additional 23 first downs on his runs.

Emerging as one of the nation's best deep threats with Tagovailoa at the helm, Jeudy leads the conference with his 27.1 yards per reception. He's hauled in 705 yards and 252 yards after the catch, forcing six missed tackles, sporting the SEC's third-highest YAC/reception rate (behind two teammates).

Hampered by injuries so far, Hall's presence on the Missouri offense is evident whenever he takes the field. Despite just 27 targets, Hall has brought in a first down or touchdown on 16 of his 18 receptions this season.

Waddle may be the top true freshman by season's end at this pace, rocketing up the charts with more time on the field. He's hauled in 77.3% of his targeted passes (17 of 19 catchable passes) for 340 yards and has racked up an impressive 147 yards after the catch and forced four missed tackles.

One tough guy to bring down, Sternberger has impressively forced eight missed tackles after the catch and gains on average 8.8 yards after the catch per reception. His 23 combined touchdowns (6) and first downs are by far the most in the conference.

Among qualifying tackles with a full season's worth of snaps, Williams is the highest-graded tackle in the country and was selected to our Midseason All-American Team in the process. On 192 pass-blocking snaps, he has allowed just four pressures, including no sacks allowed.

A fractured fibula has sidelined Cleveland over the past few weeks but what he did before injury was remarkable. On 100 pass-blocking snaps, he did not allow a single pressure while he also held the conference's best 81.4 run-blocking grade among guards.

Reagan is making a claim for the best guard in the conference at this rate, currently posting a career-high 80.2 overall grade. He hasn't allowed a sack in two seasons as the last time he allowed Kyle Shurmur to be taken down was in Vanderbilt's 2016 bowl game against NC State.

Thomas, though currently holding a higher grade than Williams, hasn't quite had the snap count necessary to crack the top charts – but he's well on his way there at his current rate to being seen as one of the nation's best at the position by the end of the season. He's impressed in run-blocking, holding the conference's best 89.9 run-blocking grade. 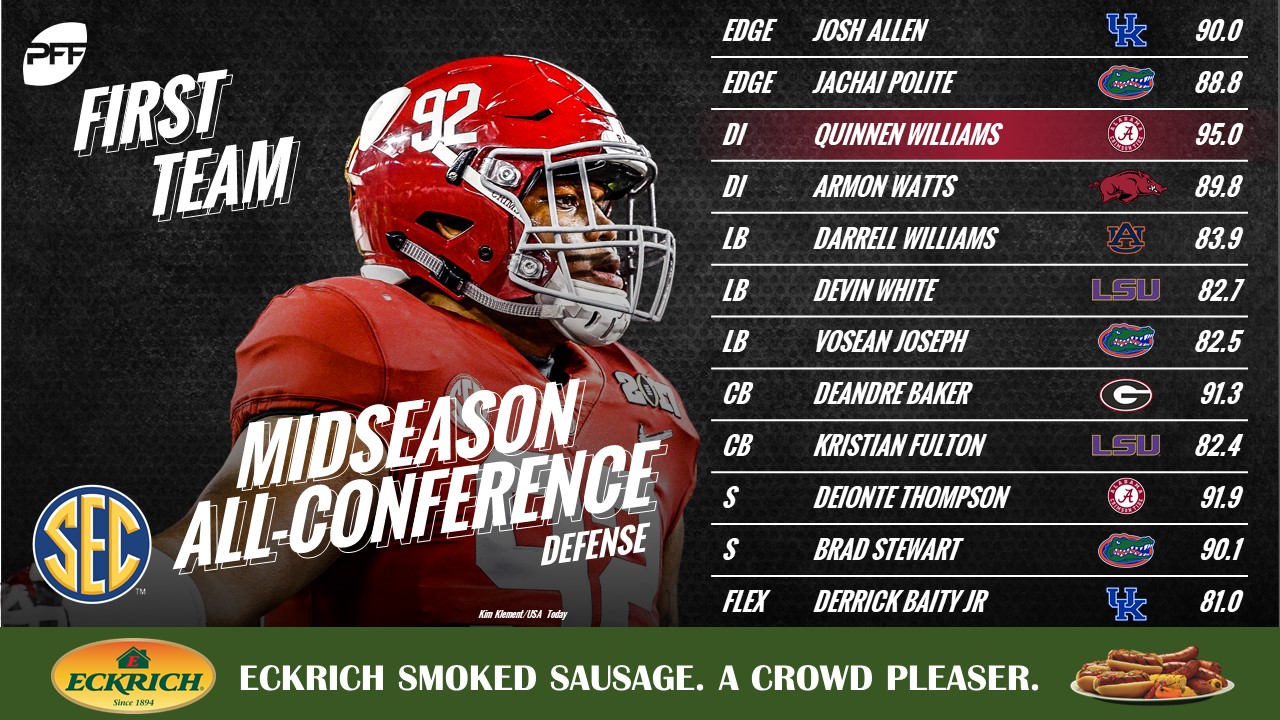 Allen has always had the tools necessary to be a formidable pass-rusher but 2018 has officially been labeled as his coming out party. Currently, Kentucky's leading man on defense has 33 total pressures including 13 combined sacks (6) and hits (7) while he's brought down 20 stops and dropped admirably into coverage on 83 snaps.

Polite is another edge defender in the SEC enjoying a breakout season to the tune of 10 combined sacks (5) and hits (5) and 24 total pressures. Polite had forced three fumbles to lead SEC edge defenders and batted two more passes at the line of scrimmage.

The nation's highest-graded player at any position has proven unblockable this year. Selected to the Midseason All-American Team, Williams has racked up 22 defensive stops and 21 total QB pressures – each tied among the top for interior defensive linemen in the conference.

Watts has had a solid year for the Razorbacks on defense, racking up an impressive 17 pressures including four sacks and two QB hits. He has missed just one tackle on his 16 attempts and forced two fumbles in the process.

While he's been strong in coverage (just 27 yards after the catch allowed), Williams' bread-and-butter is his run defense and tackling skills. In total, he's pulled down 20 stops for an offensive failure while also racking up 43 total tackles compared to just three missed tackles.

White is an absolute menace when he rushes the passer, besting the next closest SEC linebacker by five pressures this season. His 16 pressures include one sack, four QB hits and an additional 11 hurries. While he's missed nine tackles, he's also broken up a pass and limited receivers to a long of just 23 yards in his coverage.

Joseph is another Gator having a breakout year, recording six total pressures on just 26 pass-rushes while he's also brought in 26 defensive stops and two more pass breakups in coverage.

The nation's highest-graded cornerback, Baker locks down receivers week in and week out. He's recorded 10 plays on the ball on 30 targets (2 INT, 8 PBU) while he's allowed only 17 yards after the catch and has yet to give up a touchdown in his primary coverage this season.

LSU is greatly benefiting from Fulton's shortened suspension as he was reinstated prior to the season's beginning. He's impressed in coverage mainly, allowing just 10 receptions on 31 targets while breaking up five and making a highlight-reel interception against Georgia.

On our Heisman Hopefuls list just a few weeks ago, Thompson has slowed his play recently, yet is still the nation's highest-graded safety. He has broken up five passes, intercepted two and also brought in a sack and a forced fumble on the season, making splash plays for Alabama seemingly at will.

Stewart is the third and final Florida Gator defensive player enjoying an extremely successful start to the season, certainly exceeding the expectations of even those in Gainesville this season. Stewart hasn't been targeted often in coverage, but when he has, he's brought in two interceptions and two pass breakups on 11 targets and had the game-clinching pick-6 against LSU.

Baity has been a mainstay and a PFF favorite for years now and it has been more of the same this year. Allowing just 9 receptions on 24 targets for just 76 yards will do that for a cornerback. He's intercepted another pass and broken up four more to boot, seeing a 29.2 passer rating on throws into his coverage.