In our past article we pointed you towards TCU (+1), and while you got to the window it likely required a shower afterward.  Boise State (-2.5) wasn’t looking very hot prior to their game being deemed a “no contest” against Boston College, while Baylor (+4) not only covered against Vandy but won outright. We are 5-1 so far this bowl season, and 14-10-1 on all “picks of the week” picks this season. We offer our first pick of the College Football Playoff in Notre Dame (+12.5) below, and back an old friend in Mike Leach and the Washington State Cougars. Enjoy! 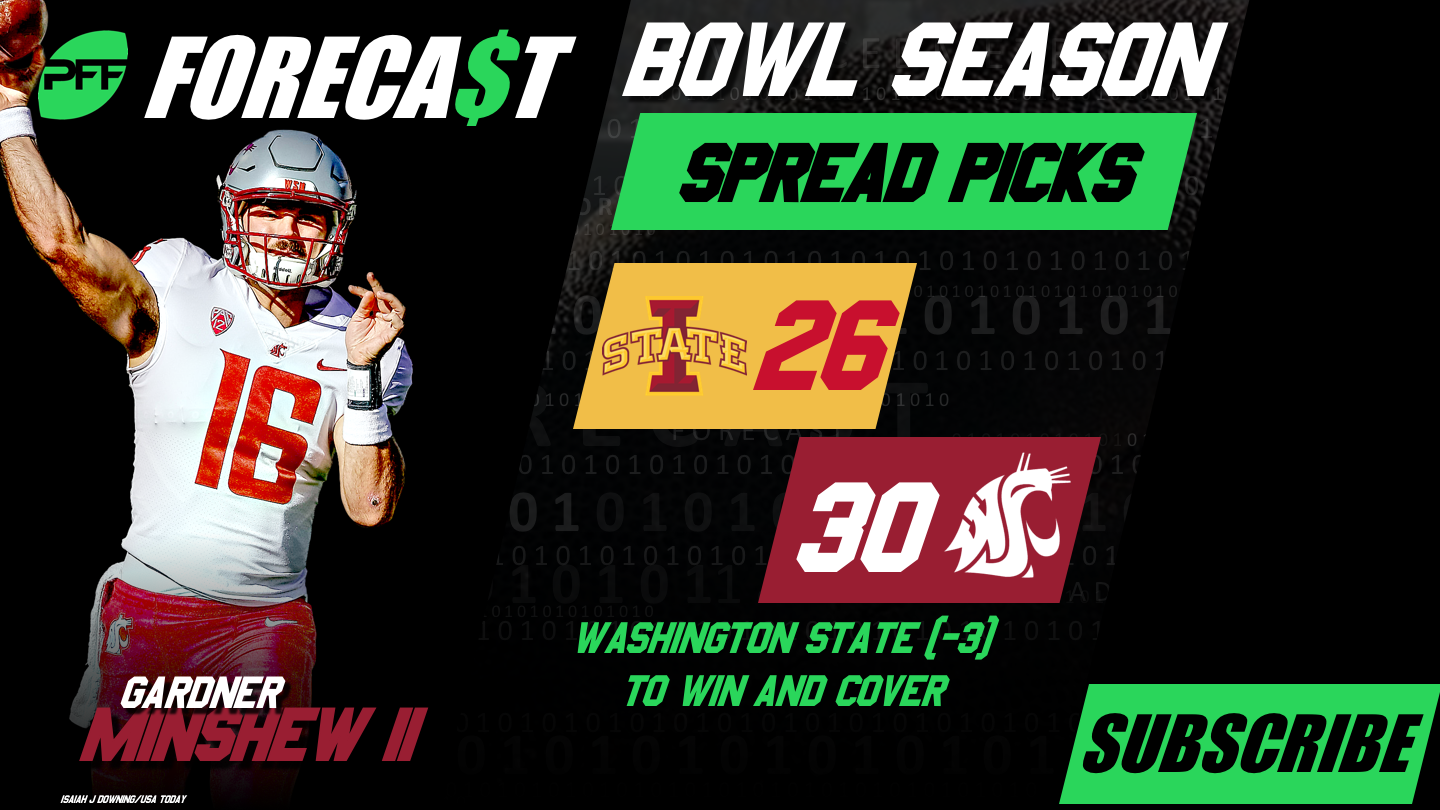 Point (EE): The Cougars have been a team our model has liked all season, and the reasons are manifold. They are the most successful offense in the Pac 12 in terms of early-down passing (+0.19 EPA per play, successful on more than 52% of such plays) and are allowing negative EPA on both early-down passes and early-down runs. Gardner Minshew has dropped back to pass in a clean pocket almost 500 times and has generated almost eight yards per attempt in such an environment (115.2 passer rating). James Williams has been one of the best backs in the country, forcing 36 missed tackles as a runner and another 29 on his 76 receptions. While David Montgomery, Brock Purdy and Hakeem Butler offer Iowa State significant star power on the other side, back Washington State and their commitment to efficient play on both sides of the ball in this one.

Counterpoint (BB): Iowa State is a team that has been on a progressive rise throughout the season. With signature wins over Oklahoma State and West Virginia following up their only questionable loss to TCU, this is a team that has performed well outside of their barn burner against Drake. With true freshman Brock Purdy grading as a Cluster 1 quarterback, this offense has had 54% of early-down pass attempts be successful. Their defense is the only respectable unit coming out of the Big 12, with an EPA allowed of -0.08 on early-down passes and -0.21 on early-down rush attempts. With the possibility that the core of this offense could return in 2019, the Cyclones should play well as a building block to much brighter dreams in 2019. They have the defense capable of limiting the Cougar passing attack and are a tough draw laying three points in one of the best bowl games outside of the playoffs. 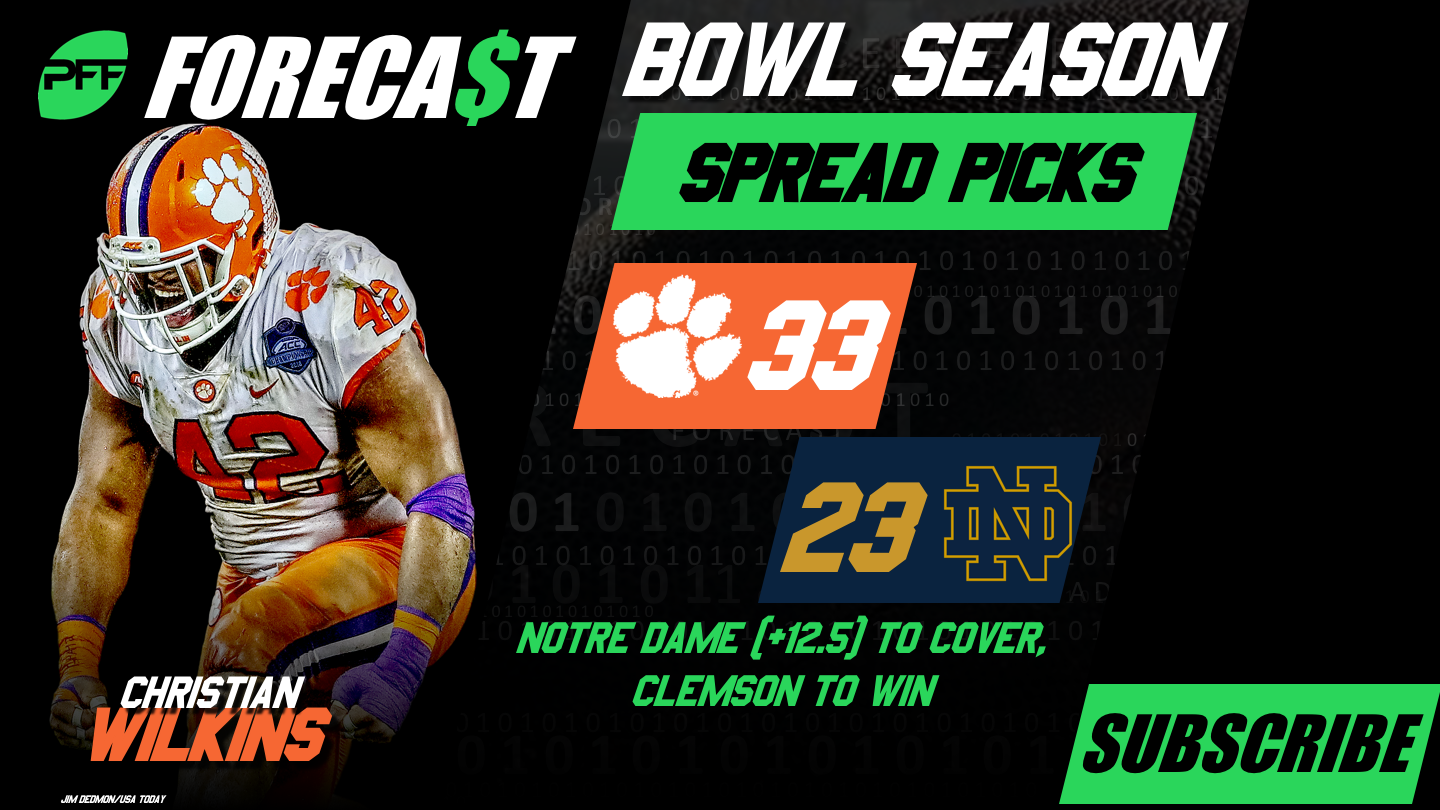 Point (Ben Brown): The Fighting Irish find themselves at 12.5-point underdogs to start the College Football Playoff. Ian Book has been a revelation in South Bend, posting the 10th-best EPA per dropback in the nation at 0.25. Where Book has struggled is under pressure, something where the Tigers defense is absolutely dominant. With Dexter Lawrence out, it is possible that this defensive line isn’t as prolific as it was throughout the season but that may just be wishful thinking with everyone else they have. Still, with how heavily the Tigers rely on rushing success, many a dominant team have been upset when their quarterback play was inferior to their opponent. Laying 12.5 points and with what we believe to be the better quarterback and a defense in the same playing field as Clemson, Notre Dame is getting our backing in the first college playoff game of 2018.

Counterpoint (Eric Eager): It’s hard to make a case that we have much data on Notre Dame in spots like this, as they played the 35th-toughest schedule going into the bowl season according to our PFF ELO rating system. Book has been very good at times, but he has been poor during the 90 dropbacks in which he’s faced pressure, completing only 50.8% of his passes for 5.4 yards per attempt and three interceptions. While this will likely regress some, the volume aspect of it likely won’t, with Clemson’s front four college football’s best. Even with Dexter Lawrence suspended, Clelin Ferrell, Christian Wilkins, Austin Bryant and Xavier Thomas have combined for 25 sacks, 28 hits and 86 hits through the regular season, and will surely make life tough for the freshman signal-caller in what will be the biggest game of his life here. Can Notre Dame’s defense keep this close?