We’re two full weeks into the college football season, and we’ve already seen a lot of good play from teams in the SEC. Often a much-maligned position in the conference, quarterbacks have played their part early in the season so far.

With the impressive performances from some SEC quarterbacks, here are the top 10 in adjusted completion percentage in the SEC through two weeks.

Fromm has gone 27-for-34 so far this season, but two of those incompletions have come from a throwaway and a dropped pass.

Guarantano has thrown 11 incompletions, but of those 11, one came from a dropped pass, one from a throwaway, one from a batted pass and another two where he was hit as he threw.

Shurmur has been one of the unluckiest quarterbacks in the SEC when it comes to completion percentage. Of his 16 incompletions, four have come from dropped passes, with another three coming from throwaways and one from a play where he was hit as thrown.

The savior from Alabama’s championship win last season, Tagovailoa has just 10 incompletions on the year so far. Of those 10, he was one of each with regards to drops, throwaways, batted passes and plays where he was hit as thrown.

We’re two weeks into the season and Bentley already has suffered from six drops from his receivers. Add in a throwaway and three batted passes and it’s easy to see why his completion percentage has taken a hit. 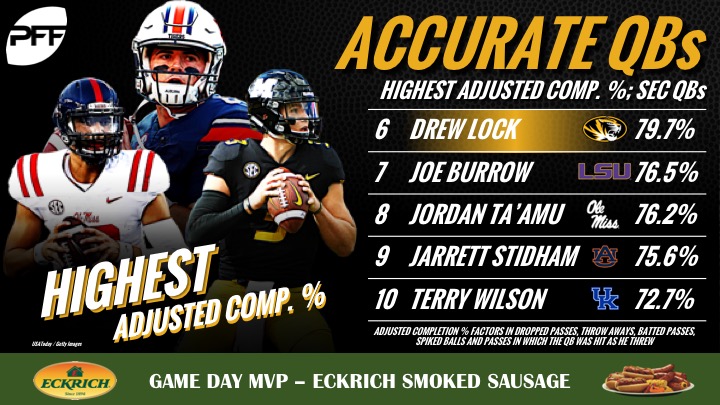 Lock has 18 incompletions through two games, but with three drops and one play where he was hit as thrown, four of them were not his fault.

LSU’s new quarterback has already seen five drops from 54 dropbacks, with five throwaways, three batted passes and one play where he was hit as thrown hurting his completion percentage too.

While he’s found plenty of big plays downfield, Ta’amu has seen three drops, two throwaways and one batted pass account for six of his 21 incompletions.

Stidham has gone 32-for-48 so far this year but has seen two drops and three throwaways make those numbers seem worse than they are.

Wilson has completed 22-of-34 attempts through two games. Of those 12 incompletions, two have come from dropped passes and one from a throwaway.