The All-SEC selections below are headlined by the first team with the second team listed below each position. 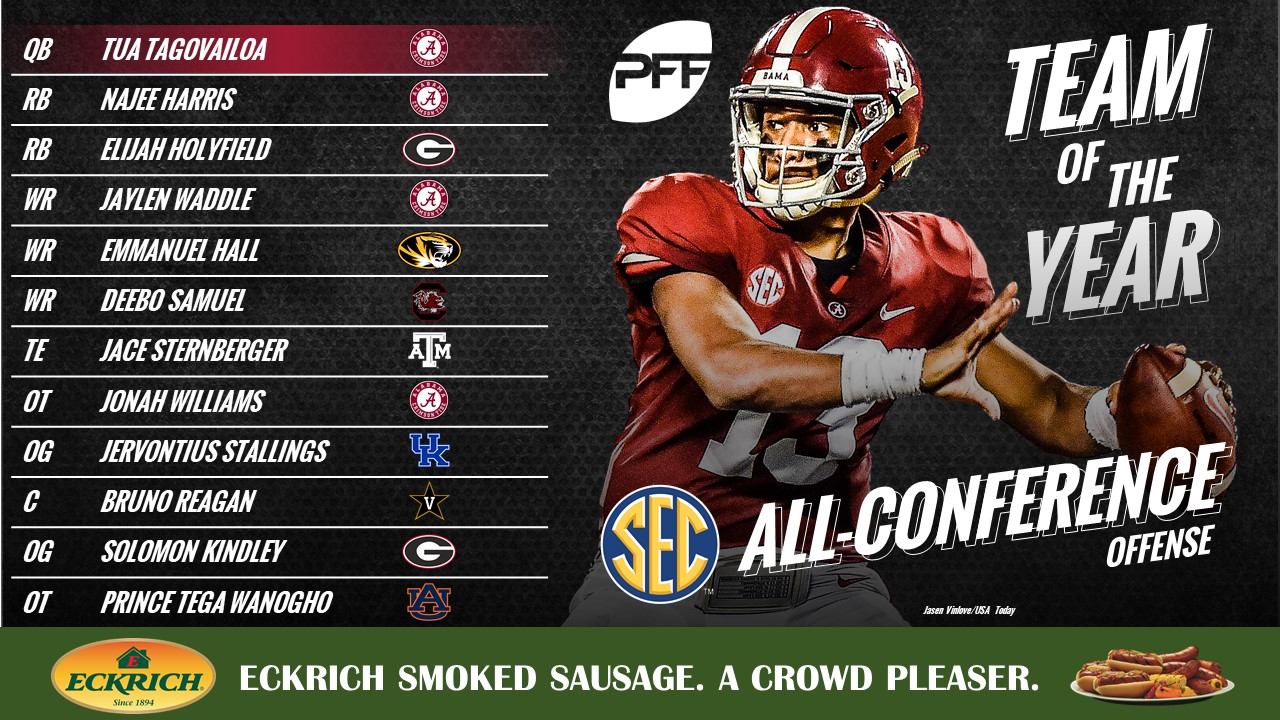 Despite the injury sustained in the SEC Championship, Tagovailoa was one of the nation's most dominant players on either side of the ball in 2018. He completed 67.2% of his passes and still averaged a yards per attempt of 11.3 – 2.0 yards higher than the next closest SEC quarterback.

Holyfield was the more dominant back in the Georgia backfield, but just barely. He averaged a healthy 4.10 yards after contact per attempt and broke off 32 combined first-down and touchdown runs to lead the team in both.

The true freshman dominated in Alabama's new-found offensive prowess, hauling in 41 receptions for 803 yards, catching 73.2% of passes thrown his way this season. His 139.9 passer rating when targeted was good enough for seventh among all FBS receivers with at least 50 targets.

Hall's deep-pass ability was apparent once again in 2018 as he led the conference with 11 receptions and 448 yards on passes targeted at least 20 yards downfield.

Samuel can do it all and he showcased that once again in 2018. He led all SEC receivers with at least 45 targets by averaging 9.7 yards after the catch per reception.

Sternberger led all conference tight ends in yards, touchdowns, first downs and yards after the catch in 2018.

Williams' overall grade topped all offensive tackles this season as he allowed just nine pressures on 410 pass-blocking snaps. His run-blocking grade of 85.4 also paced all FBS tackles as he was dominant in all facets.

On 278 pass-blocking snaps, Stallings allowed just nine pressures while his run-blocking grade of 74.1 was the second-best in the SEC.

Reagan bounced around the line for the Commodores but left his mark at center. For the year, he allowed just eight pressures on 432 snaps in pass protection.

Kindley allowed all of one QB hit and kept a clean sheet in the sack column, finishing with the conference's fourth-best pass-blocking grade among guards. 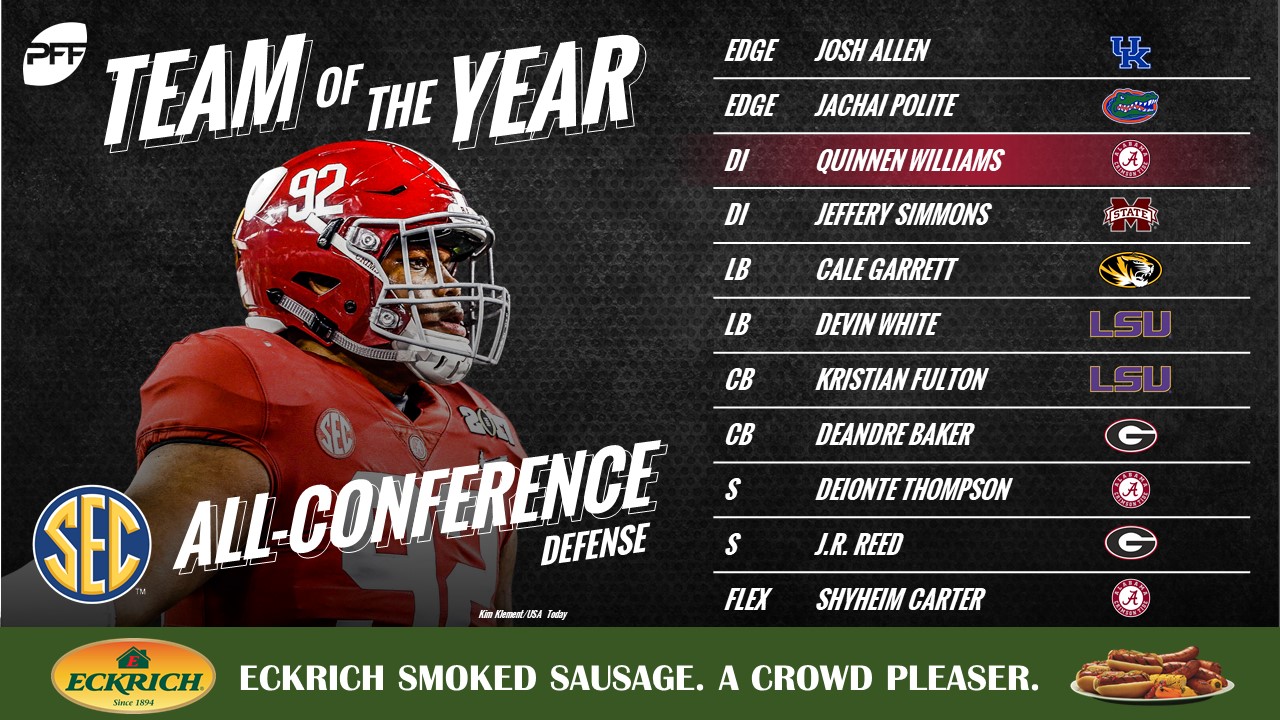 The highest-graded edge defender in the country, Allen was unstoppable on the pass-rush this season. Highlighted by his national-best 93.5 pass-rush grade, Allen brought in 51 total pressures that included 14 sacks, nine QB hits and an additional 28 hurries. Rounding out his game, he dropped into coverage on 141 snaps and allowed just 130 yards on 19 targets without allowing a touchdown.

Few players at any position had the breakout year that Polite had as he finished the season with 38 pressures on just 240 pass-rushes. He recorded 31 defensive stops and missed just two tackles on 32 attempts.

No defensive player graded as well as Williams did this season as he was dominant in every contest. He racked up 43 total QB pressures including a ridiculous 24 combined sacks and QB hits that tied for the national lead among interior defensive linemen. His 48 defensive stops were seven clear of the next-best defensive interior as he constantly wrecked opposing offensive schemes.

Simmons had yet another dominant season for the Bulldogs, recorded 27 total pressures and 30 defensive stops. He missed just two tackles on 46 total attempts.

White flew around the field for the Tigers in 2018 making a ridiculous 82 solo tackles. His presence was felt by opposing quarterbacks as well as on 98 pass-rushes, he got home with a pressure on 28 of them.

Garrett was a sure tackler for the Tigers defense, recording 105 total tackles despite just seven misses. His 39 defensive stops were good enough for eighth among conference linebackers.

Allowing just 40.5% of targets thrown his way to be caught, Fulton was stingy in coverage and saw just a 63.8 passer rating when targeted.

Baker finishes as the conference's second-highest graded cornerback and second in coverage grade as he allowed just 20 receptions on 42 targets and no reception longer than 17 yards.

Thompson made all the splash plays you'd expect from a top graded safety, and some plays you wouldn't think were possible. In total, he brought down 71 total tackles and allowed a 64.1 passer rating on 32 targeted passes.

Reed's splash play in the SEC Championship game was indicative of his strong play all season long. In coverage, he was targeted 32 times and allowed a passer rating of just 66.0 when targeted.

Carter finished the season strong for the Crimson Tide and was particularly strong in run defense where his 91.6 grade was first among cornerbacks.

Tracy did not miss an extra point in 2018, finishing a perfect 38-of-38 while he also holds the advantage in total field goal make percentage (86.2%) over Matt Gay of Utah. He connected on 9-of-12 field goals from at least 40 yards out and didn't miss a single attempt in the 20-29 yard ‘chip shot' range.

The nation's highest-graded punter, Mann knocked 29 of his 47 punts inside the opponent's 20-yard line and averaged the nation's best 45.0 net punt average. In total, he allowed 19 punts to be returned but averaged the third-highest hangtime at 4.34 seconds, relenting only 5.8 yards per return on average.

Jacobs finishes with the nation's highest overall returning grade and highest kick-return grade, averaging a whopping 30.6 yards per return. He returned 13 kicks for a staggering 398 yards and had a long of 77 yards and a touchdown.

Hardman was electric with his punt returns, gaining a conference-high 307 yards on just 14 returns. He averaged a ridiculous 21.9 yards per return and didn't muff a single attempt.