After grading and analyzing every player on every play of every game during the 2018 college football season, it’s time we unveil the 2019 Preseason PFF All-SEC first team, second team and honorable mention for every position on offense and defense as well as for the first time ever, specialists.

The Preseason All-SEC list may differ a bit from any year-end look back at the previous season as we project to the 2019 season ahead of us. Find out which of these athletes made the PFF All-American team as well. 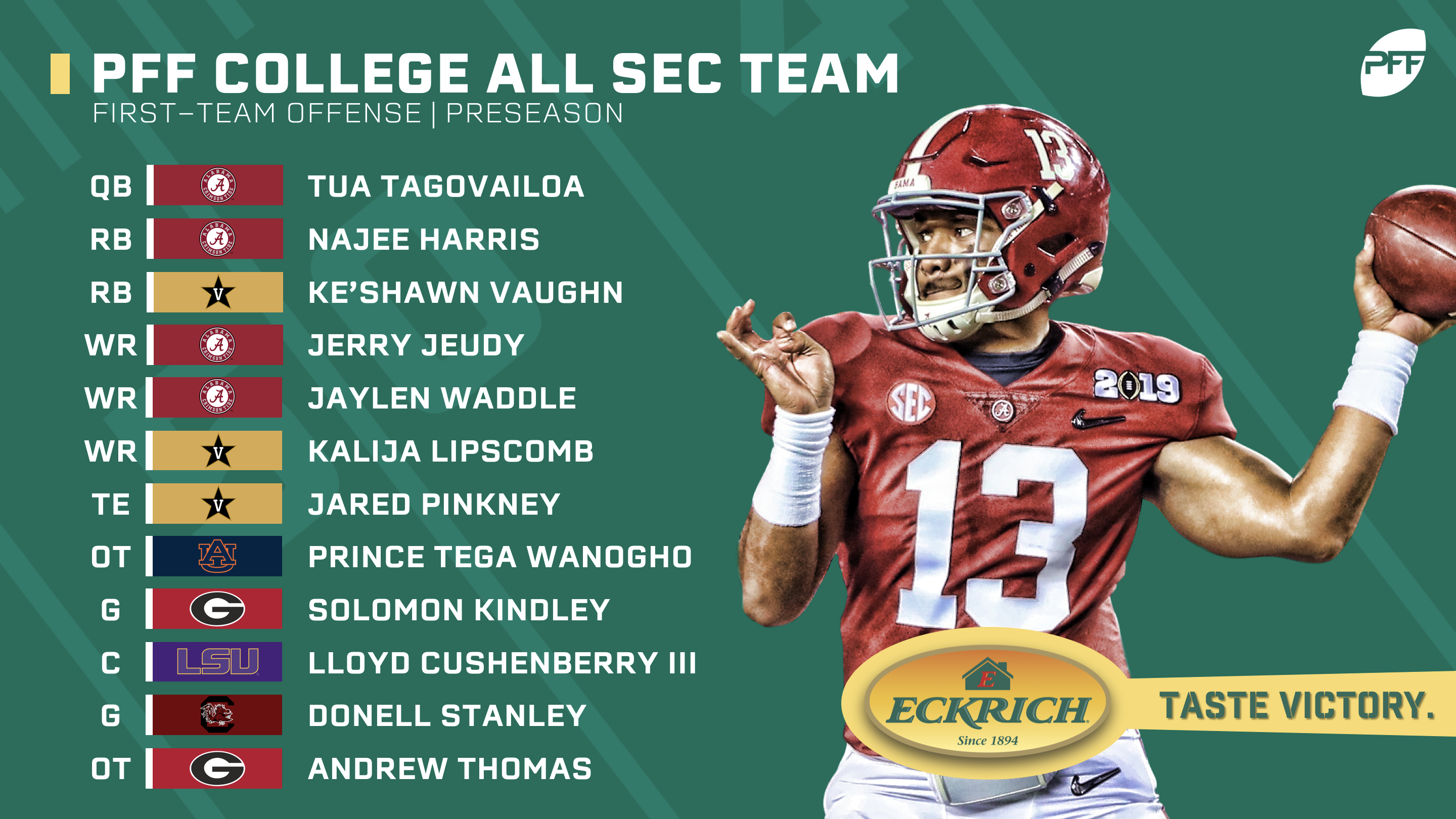 Averaging 4.38 yards after contact per carry is one thing, breaking off 28 of your 117 carries for at least 10 yards is another. Harris is on another level.

Vaughn ranks fourth among Power-5 running backs with 829 yards after contact from last year, while averaging a ridiculous 7.9 yards per carry.

Jeudy runs the nation's best routes as the reigning Biletnikoff Award winner is one of the more dominating receiving threats we've seen in a while.

A shifty guy with the ball in his hands, Waddle is a reliable target that could very easily be a WR1 for the majority of other college football programs.

Catching over 70.0% of your passes is one thing, catching 71.0% of a ridiculous 124 passes thrown your way is another and Lipscomb did all of that with just five dropped balls on 93 catchable targets last year.

Pinkney leads all returning tight ends in yards and is a diamond in the rough in terms of his elusiveness after the catch. He can make defenders miss just as easy as he can grab the contested catch over the middle of the field.

Kindley is a dominant force on the ground for the Bulldogs rushing attack just as he is strong in pass protection. A well-rounded guard anchors one of the nation's top tackle duos as Kindley's pass-blocking grades is the tops among active Power-5 guards.

Allowing just eight pressures on 480 snaps in pass protection is one way to get yourself noticed and Cushenberry has the Power-5's second-highest pass-blocking grade among active centers.

Stanley kicks outside to guard full-time as he played 74 snaps at either guard position a year ago. His 81.3 pass-blocking grade ranks inside the top-20 of all returning guards at the Power-5 level.

Thomas has allowed just four sacks in his career and multiple pressures in just three contests a season ago. With another year in the system at left tackle, Thomas will once again be an SEC stalwart along Fromm’s blindside. 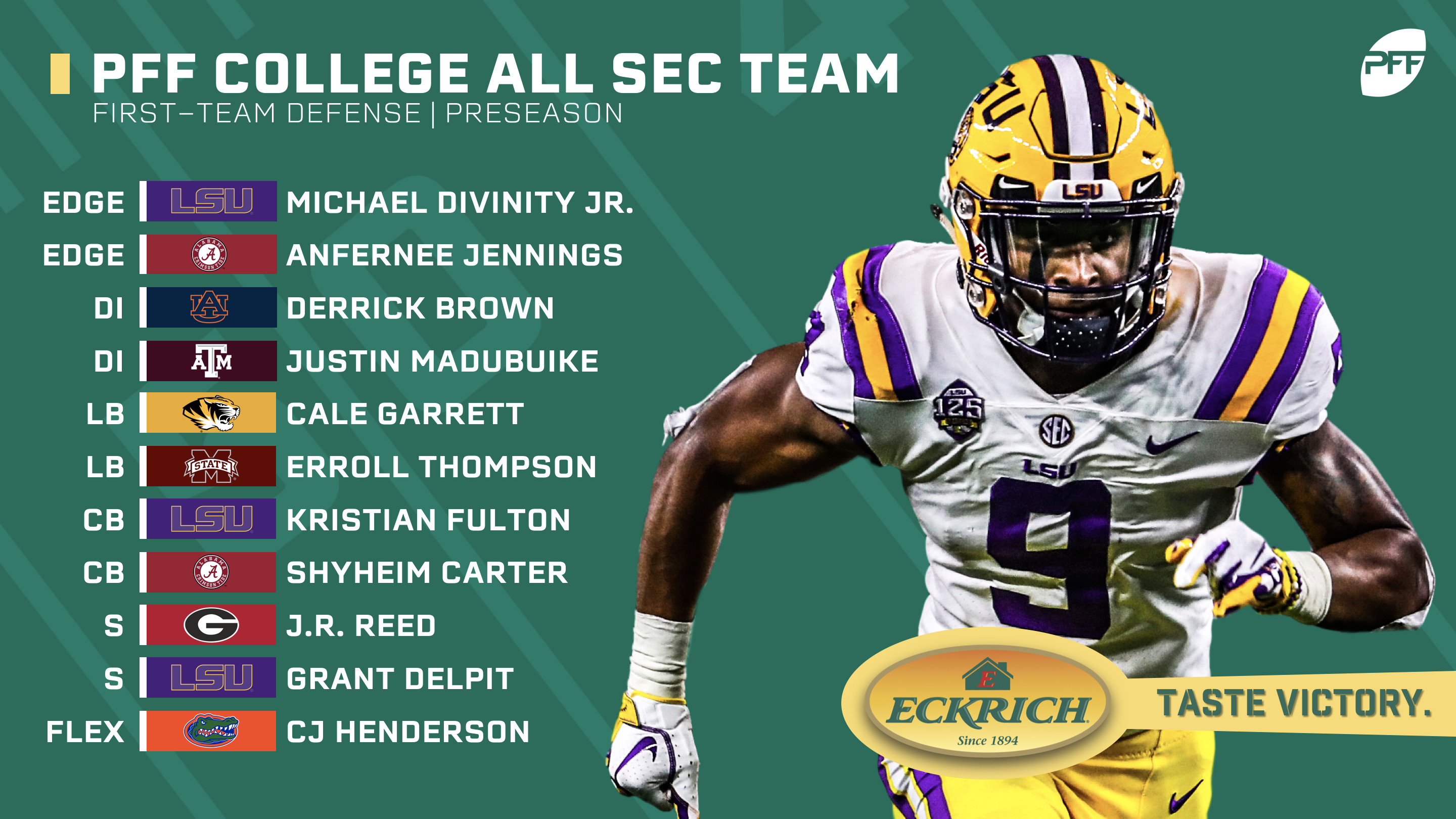 Divinity dropped back into coverage on 158 snaps a season ago and put forth the Power-5's highest coverage grade among qualifying edge defenders. He's also got a top-10 pass-rush grade as well.

Jennings had 36 total QB pressures a year ago and 15 combined sacks and hits while holding the 21st-best run-defense grade in the Power-5.

A sure-tackler, Brown has missed just four of his 85 tackle attempts over the past two seasons and is fourth among defensive interior players in pressures.

Leading the nation's interior defenders last season, Madubuike racked up 19 combined sacks and hits while only missing one tackle in run defense as a true three-down interior defensive lineman.

On just 62 pass-rushes, Garrett brought down 15 QB pressures while recording 46 defensive stops and plus grades across the board.

On 310 snaps in coverage, Thompson allowed just 7.1 yards per reception allowed and kept quarterbacks to just a 56.2 passer rating on throws as the primary coverage defender.

Exploding onto the scene, Fulton allowed just 41.5% of the passes thrown his way to be caught, limited receivers to just 49 yards after the catch and made eight total plays on the ball in a dominant year in 2018.

Playing mainly in the slot, Carter allowed fewer than 50.0% of the passes thrown his way to be caught. His sticky play in coverage allowed him to finish seventh among all active cornerbacks in overall grade a year ago.

Reed has the fifth-highest coverage grade among active safeties and has allowed just 6.1 yards per target as the primary coverage defender.

Save for his missed tackles, Delpit flies to the ball like a missile and can bring it on the pass-rush, in run defense and is terrific in coverage.

On 36 targeted passes, Henderson allowed just 18 receptions with neither catch allowed going over 41 yards. He didn't allow a touchdown and broke up six passes with an additional two interceptions.

Blankenship nailed all 62 of his extra point attempts and made 8-of-10 from at least 40 yards out last season.

The nation's highest-graded punter by some margin, Mann averaged 51.0 yards per attempt and 44.8 net yards per punt, both tops among returning punters.