The 2019 season begins this weekend and with that, the full set of 2018 data officially becomes history. We look ahead towards the top-graded players returning in each conference, starting things off with the ACC. 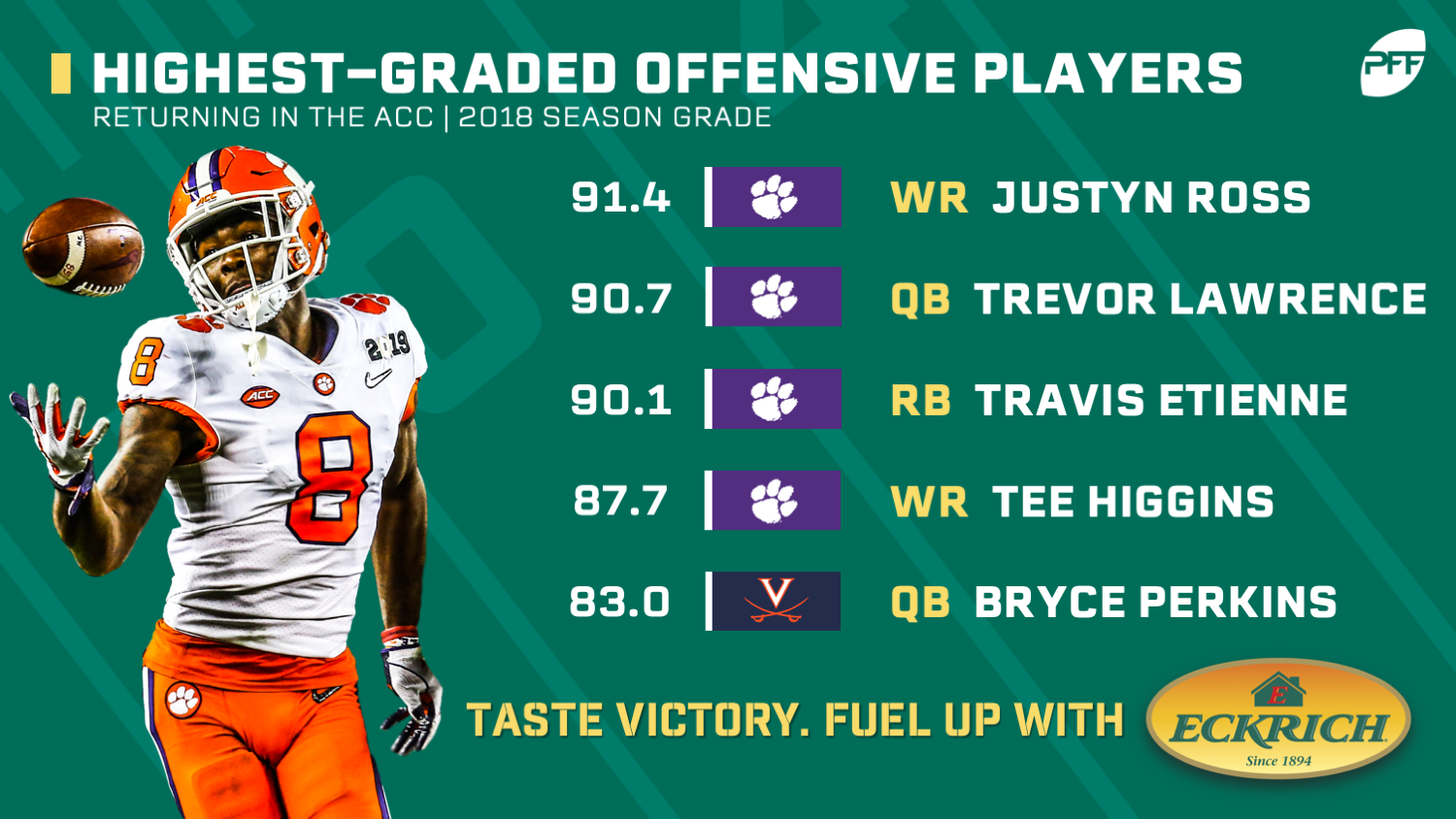 The top-three graded quarterbacks find themselves on our All-ACC Team as Trevor Lawrence earned the highest ever grade we've given to a true freshman quarterback a season ago. Blackman played in only four games before receiving his redshirt but still looked every bit of a top-notch quarterback in limited action under head coach Willie Taggert.

The Clemson trio atop here combined for 346 carries a season ago with Etienne leading the way with 204, averaging a ridiculous 8.1 yards per attempt. Dallas is expected to see a heavy workload out of the backfield for the Hurricanes as they break in a new starting quarterback when they open the season against Florida on August 24.

Ross and Higgins dominate the list as they form arguably the best 1-2 punch at receiver in the country. Overton saw only 22 targets a year ago but should have a larger target share this season.

Perhaps one of the weaker tight end classes in recent memory, the nation lacks true playmaking tight ends at every conference and the ACC is no different. Tucker returns with 16 receptions for 265 yards and two scores from a season ago as the highest-graded of the bunch.

The Clemson duo headline the group but Heck returns with one of the nation's highest pass-blocking grades from a season ago. Carman and Anchrum allowed just two sacks on a combined 545 pass-blocking snaps.

Again, Clemson linemen dominate the list as Bockhorst didn't allow a single pressure on 68 snaps in pass protection in a limited role a year ago. Three more-than-capable guards highlight how deep this roster is.

The top two on this list have been solid starters for two seasons now and Cooper, another veteran, will get to shine with his pass protection as he's graded out with positive pass-blocking grades in each of his three previous seasons. With the switch to the spread attack, that skillset should shine. 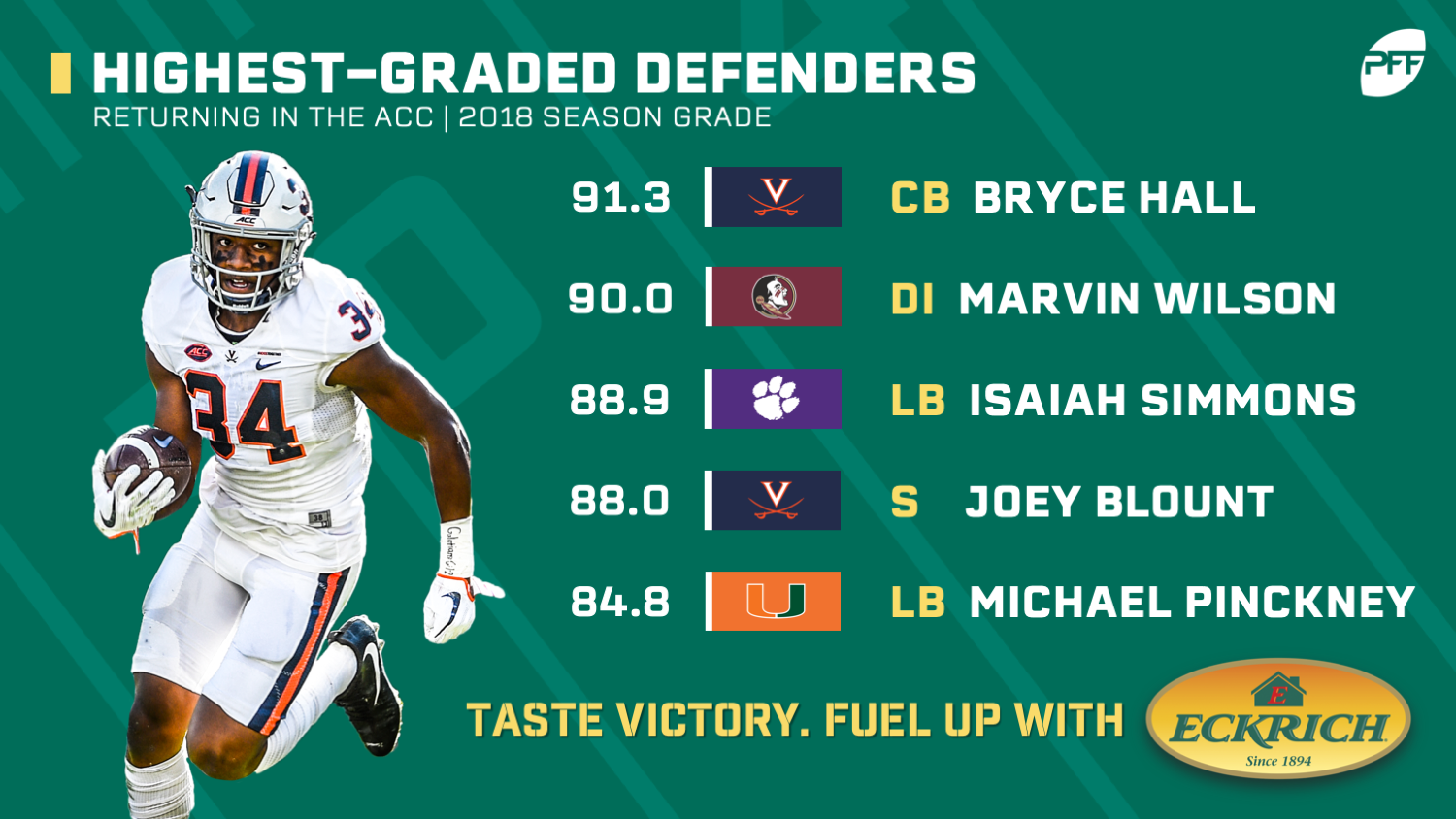 Weaver will miss the season with a torn ACL in a huge blow to the Panthers defense. Thomas is set for a featured role as a dominant pass-rusher as he totaled 26 QB pressures on just 150 snaps last year behind NFL-level players ahead of him.

Wilson is the class of the defensive line returning to the ACC this season, totaling 34 pressures and 23 defensive stops a year ago. He returns with the highest pass-rushing grade AND the highest run-defense grade on the interior.

Simmons' strong suit is in coverage where he recorded seven plays on the ball and no reception longer than 31 yards in his primary coverage a year ago. Pinckney is also no slouch in coverage, seeing just a 40.6 passer rating when targeted.

Hall is the nation's highest-graded cornerback and the highest-rated player on our College 50 entering the season for good reason. He is the nation's best on intermediate to deep passes while Bandy, Bassey, Carter and Terrell each saw extremely high coverage grades a year ago.