The first real live action of the 2019-20 college football season has come and gone in a flurry. Our immediate takeaways from the season's first two include an offensive line that must improve and a new potential quarterback controversy in Hawaii.

The Miami offensive line was arguably their biggest weakness on paper entering the season opener against Florida. The Hurricanes' front five allowed a total of 18 pressures on the team's 48 dropbacks. True freshman left tackle Zion Nelson really saw the brunt end of the struggles, allowing seven pressures himself and a lowly pass-blocking grade. If there was a shining moment in the Miami trenches, it was left guard Nevaughn Donaldson, who did not allow a pressure on his 48 snaps in pass protection. 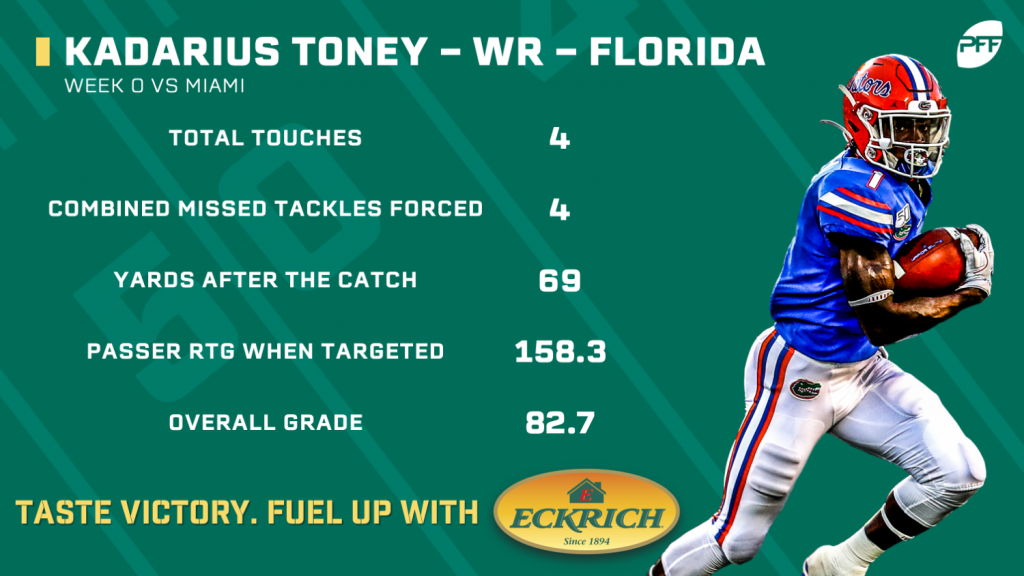 Florida inched out the victory over Miami and their receivers are large in part to thank for that. Speedster Kadarius Toney took a screen pass from Feleipe Franks 70 yards after the catch for a score, forcing three missed tackles in the process while Josh Hammond was on the receiving end of Franks' best throw of the night up the seam. Hammond hauled in all four of his targets for 93 yards, 50 of which came after the catch and secured three first downs.

Dan Mullen not afraid of 4th down

Greenard was injured on the first defensive series of Louisville's 2018 season after being selected a team captain. He transferred to Florida and in his return, he secured the game-high overall grade that included a game-high pass-rush grade. He recorded seven total pressures on his 42 pass-rushes including two sacks and five hurries. His elite grades do come with an asterisk, as he did it against a subpar offensive line, but his name is firmly on the national radar after his performance. 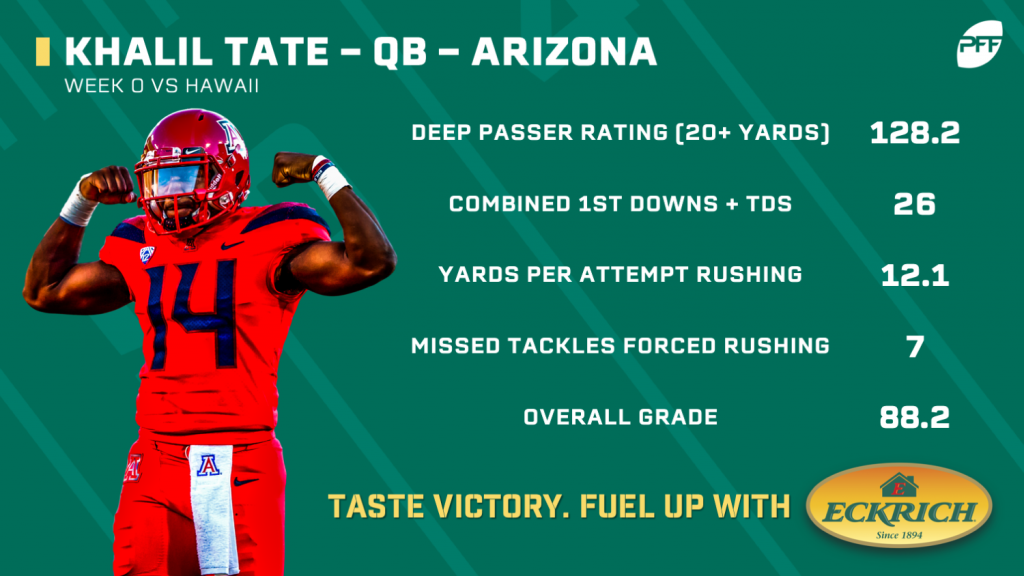 Khalil Tate is worthy of his top-10 billing

Having recently ranked him as the 10th-best quarterback in the country, Arizona quarterback Khalil Tate certainly did his part in his team's loss on Saturday night. Despite the result, Tate reassured fans that he's back from injury and a fully capable thrower and runner in Kevin Sumlin's offense. He ran for a total of 121 yards, forced a ridiculous seven missed tackles and had five of his 10 carries tally 10 or more yards. He's a dynamic runner who is more than capable as a passer, averaging 9.0 yards per attempt and an 81.0 passing grade.

Cole McDonald pulled, is there a controversy?

McDonald threw four touchdown passes but also four interceptions before he was pulled by head coach Nick Rolovich entering the fourth quarter of the Hawaii upset victory. Cheven Cordeiro replaced McDonald and threw what became the game-winner to Cedric Byrd. Rolovich stated after the game that ‘each quarterback is capable of running this offense.' Odds are it's McDonald who returns to action the next time we see the Rainbow Warriors, but this is certainly something to monitor going forward.

Byrd found his way open more often than not against Arizona, averaging 15.8 yards per target, on a whopping 21 targeted passes. He hauled in 14 of those targets and secured four touchdown receptions. His 16.0 yards per reception against the Wildcats is a strong indicator of how the Hawaii offense was able to script their star receiver to get open against lesser coverage opponents. He did the majority of his damage against the Wildcats' safeties and linebackers over the middle, including five receptions for 103 yards against safety Scottie Young.