The Penn State Nittany Lions find themselves in an unfamiliar place this season. After back-to-back 11-win seasons, Penn State has three regular-season losses for the first time since 2015. Coming off a crushing loss to Michigan, we investigate where the 2018 season may have gone off the rails, so to speak for the Blue and White.

One of the expected bright spots entering this season was the Penn State offensive line. It was a unit that was supposed to be the best the Nittany Lions have fielded in some time and by far the best under head coach James Franklin. However, the starting five for Penn State have had their issues with run-blocking this season, but today, we solely examine their struggles with pass-blocking efficiency.

If you narrow it down to the last five games where Penn State has gone 2-3 and faced the meat of their Big Ten schedule, the Nittany Lions have a pass-blocking efficiency of 81.0, which is the worst in the country over that time span.

The majority of the issues for the Penn State offensive line have come from the right tackle position. Redshirt sophomore Will Fries has started the majority of the snaps on the right side and has given up 27 total pressures including five sacks, which is the highest total in the Big Ten and tied for 11th-most in the country. Fries has an individual pass-blocking efficiency of 93.6, which is bottom 10 in the country as well. Part-time starter Chaz Wright has not been much better, giving up two sacks and two hurries on only 79 pass-blocking snaps. Together they are surrendering a pressure every 10 pass-blocking attempts.

It’s also been a struggle for new starting center Michael Menet. The sophomore has surrendered the eighth-most pressures in the country at the center position with 18 through nine games.

Left tackle Ryan Bates, who has a pass-blocking grade of 80.1 this season, has had an up and down year. In the Nittany Lions six wins, Bates has only given up six pressures and no sacks. Despite that, Bates has struggled against premier pass-rushers in the Big Ten. In the team’s three losses to Ohio State, Michigan State and Michigan, Bates has given up eight of his 12 hurries and all three of his sacks.

The lone bright spots from the Nittany Lions have come at guard. Junior Conner McGovern has only given up one sack and seven total pressures this season on 303 pass blocking attempts and redshirt junior Steven Gonzalez has allowed 11 total pressures. 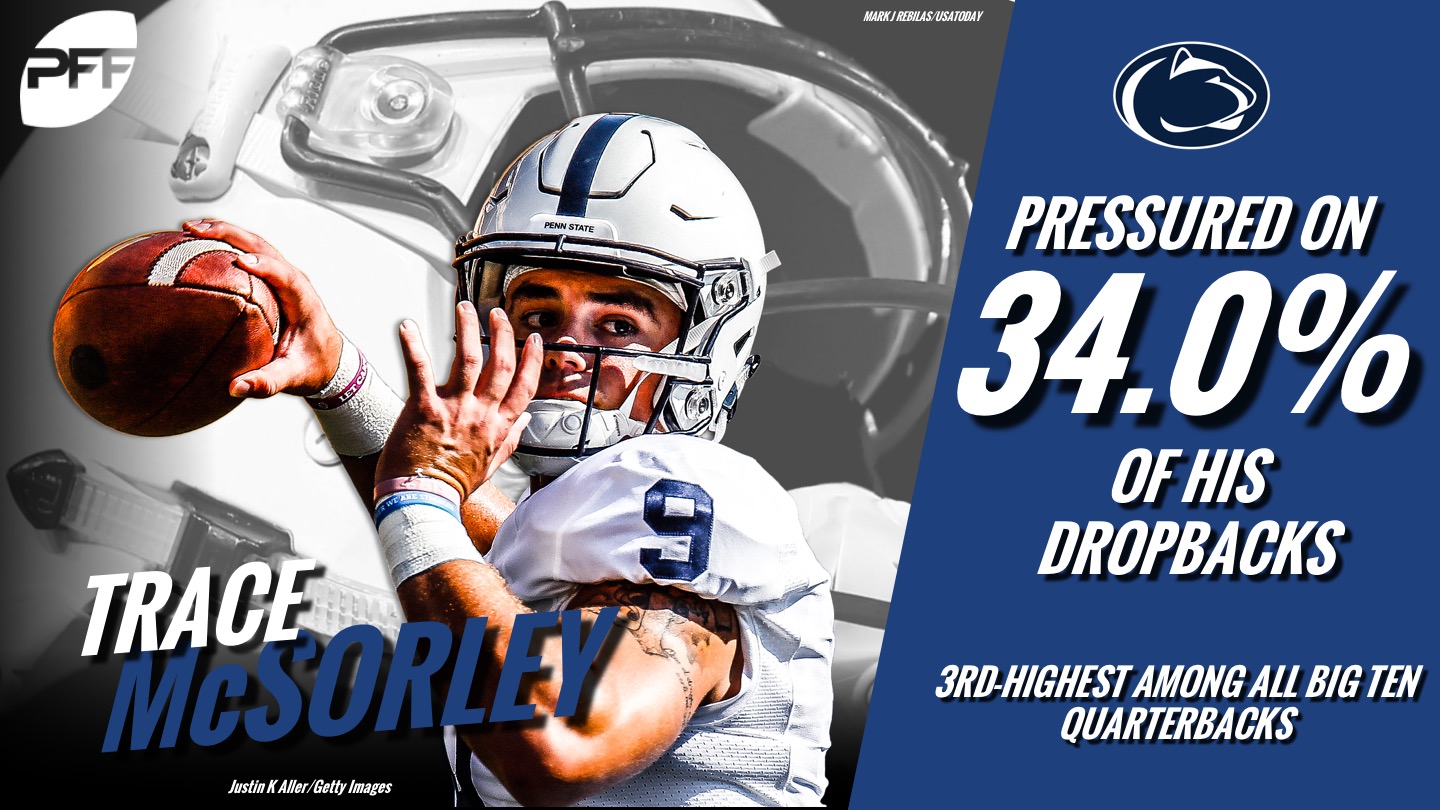 The offensive line isn't solely to blame either as we at PFF also credit pressure allowed to the quarterback and Trace McSorley has allowed or manufactured 12 pressures himself, including two sacks.

The good news for the Penn State offensive line is that the worst is over. They have faced six of the top 10 pass-rushers in terms of our pass-rushing productivity metric, in the past five games. There is only one top 10 pass-rusher left on the schedule in Antoine Brooks Jr of Maryland, who Penn State plays during their final game of the regular season.

Perhaps the offense can keep McSorley upright to finish out his career.