The past two Heisman winners have come from the Oklahoma backfield.

The Sooners return the Big 12's two highest-graded non-quarterbacks on offense in 2019.

Oklahoma will also likely start former Alabama QB Jalen Hurts in Week 1 after accumulating a 26-2 record as a starter with the Crimson Tide.

Still, the Texas Longhorns could field the conference's most high-powered offense this season with head coach Tom Herman's returning nucleus of stars.

At the heart of it all is QB Sam Ehlinger, who put forth the conference's third-highest grade among returning signal-callers at 85.7 overall, an elite figure at the college football level. He leads all returning Big 12 quarterbacks in yards (3,286), touchdowns (25), big-time throws (22) while limiting himself to just seven turnover-worthy passes a season ago, the fewest among returning quarterbacks with at least 210 attempts.

Perhaps the most important factor in why Ehlinger should be a considerable favorite for top conference quarterback is the fact that he finished last season as the returning leader in passer rating from a clean pocket. His 113.5 passer rating on clean dropbacks paced all returning quarterbacks and his 19-2 TD:INT ratio is among the nation's best. In fact, his 113.5 is a top-20 mark among all returning signal-callers and ties him with Clemson QB Trevor Lawrence in that regard. 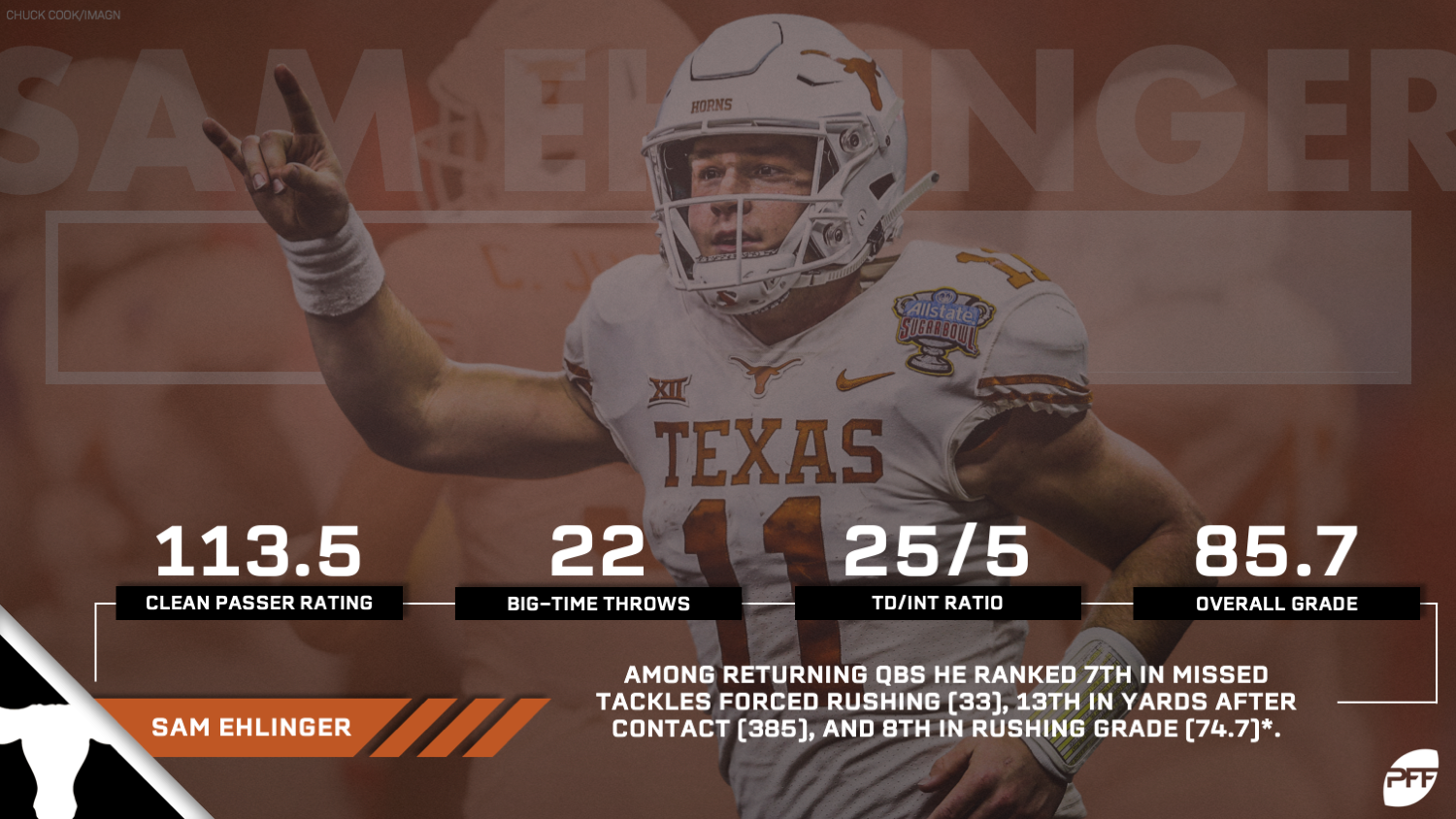 Quarterback play from a clean pocket is one of the more stable metrics in terms of predicting future success at the position, and one of the big reasons why Ehlinger should have a leg up on his competition this fall.

It also helps that he has a strong offensive line to play behind.

What makes Cosmi such a headliner is not just the fact that he graded so high, it's that he rarely left the field and logged more snaps than any returning Big 12 player regardless of position (and the third-most snaps among any returning player in the country). Cosmi was dominant in his first year of action with the Longhorns and even put forth five different outings without allowing a single QB pressure, even in the game against Oklahoma early in the year. He played terrific football, and a lot of terrific football. 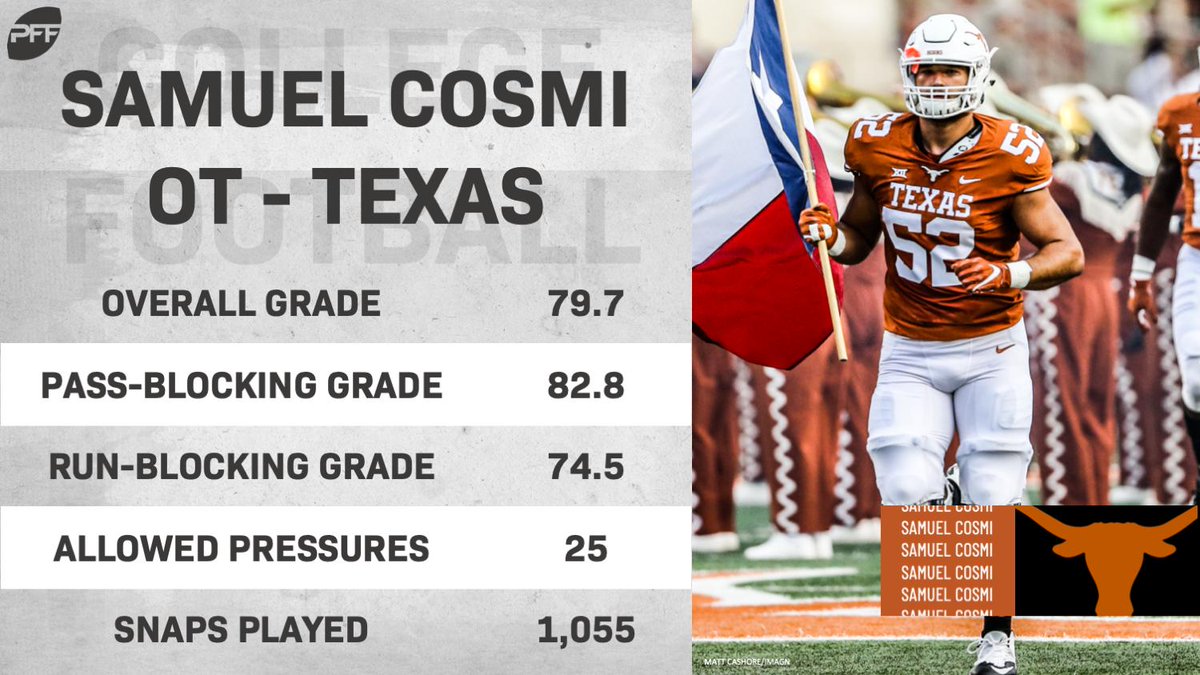 Also returning along the offensive line in Austin are Derek Kerstetter and Zach Shackelford. Kerstetter should likely fall in line with Cosmi's switch to left tackle and slide into the right tackle spot himself after playing heavy snaps at right guard a season ago. Shackelford returns as the fourth highest-graded center and with the third-highest pass-blocking grade in the conference as he didn't allow a single sack and only one QB hit on 440 pass-blocking snaps last year. The center-quarterback exchange should have no issues moving forward, an underappreciated aspect of solid quarterback play year-to-year.

When Ehlinger does indeed have the ball, his options are seemingly more plentiful than they have been in his years at Texas. Despite losing Lil'Jordan Humphrey in the slot, Ehlinger will have the likes of Collin Johnson and Devin Duvernay hauling in his passes and also Keontay Ingram out of the backfield.

Starting with Johnson, the conference's third highest-graded returning receiver, he racked up a 119.6 passer rating when targeted on 103 targets. He hauled in 66.0% of total throws his way and dropped just two of 70 catchable targets. Of his 68 total receptions, 47 of them moved the chains (40) or scored a touchdown (seven). He's one of not only the Big 12's most prominent returning receivers, but one of the nation's top returning players at the position, and one who should find himself on the Biletnikoff Award list mentions all season.

His 140.0 passer rating when targeted on deep passes ranks well ahead of the next closest returning receiver in the conference and ranks among the nation's best. 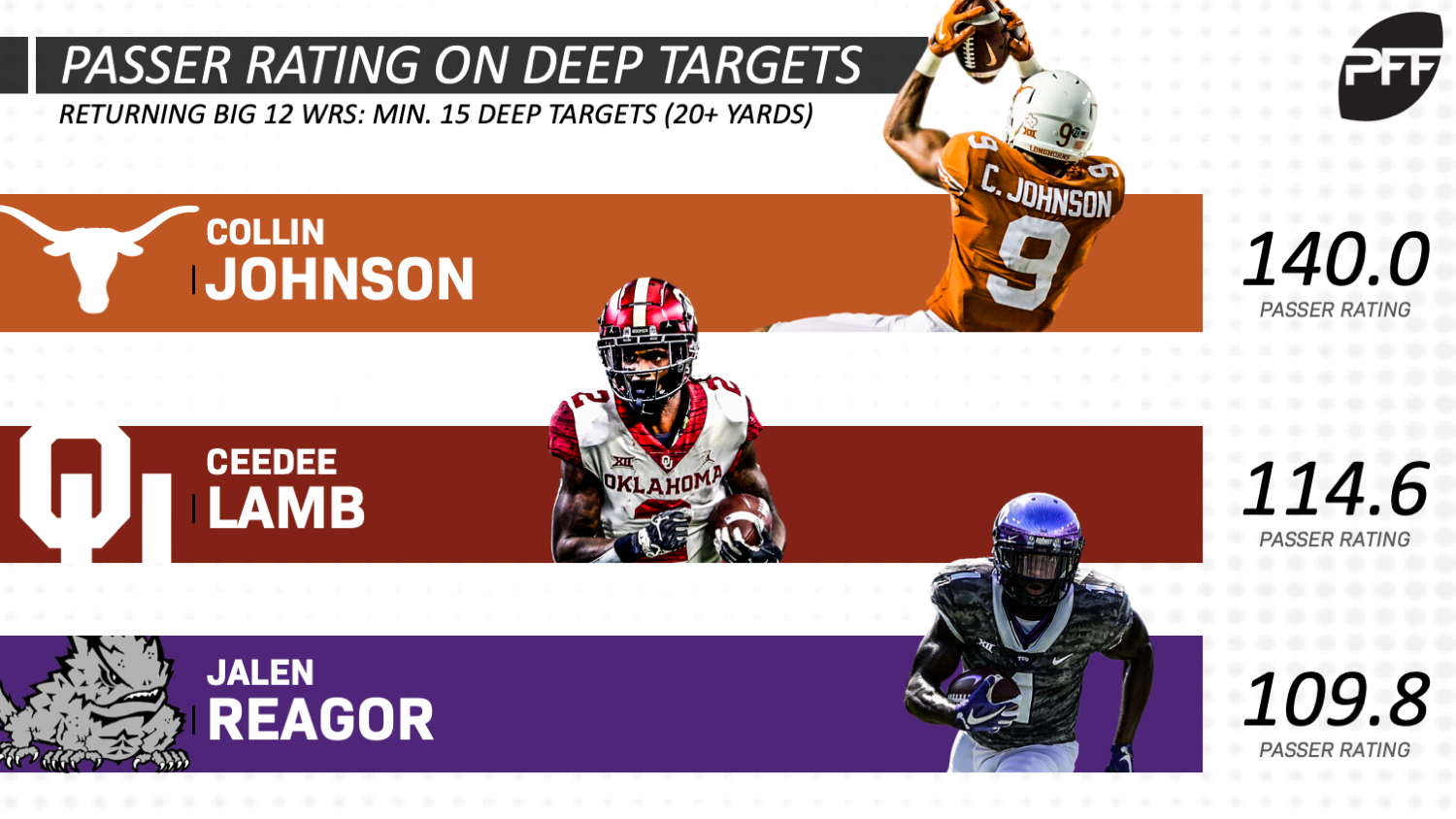 Duvernay didn't light the field on fire a season ago but did finish with the conference's best returning drop grade after not allowing a single catchable pass thrown his way fall to the ground. In fact, Duvernay's 41 receptions without a drop are the second-most among all returning receivers at the FBS level from 2018. His reliable hands should be a key asset for Ehlinger in 2019.

Ingram comes into the equation as the conference's returning leader in the same category among running backs, hauling in all 27 of his catchable targets without a drop.

With Johnson, Duvernay and Ingram, Ehlinger has perhaps the most sure-handed trio of returning receiving threats in the country.

Set for a bigger role this season will certainly be receivers Malcolm Epps and Joshua Moore. The duo combined for just eight receptions and 71 yards a year ago but with the vacancy created by Humphrey's jettison to the NFL should allow Moore to slide into the slot while Epps can spell both Duvernay and Johnson on the outside. Also, former Gatorade National Player of the Year Jake Smith should factor into one of these spots and is a name to keep in mind.

This offense is stacked with the right returning players in the right positions. With Bru McCoy out of the fold now, it only gives a clearer picture as to who Ehlinger can get the ball to, and that picture didn't even have McCoy in it in the first place.

This all goes without mentioning that Ehlinger possesses the country's eight-highest rushing grade among signal-callers. If all else fails, he can simply move the ball on his own, creating a multi-faceted cast of characters defensive coordinators have to gameplan around.

And that's the scariest thing about this Texas offense.