Karan Higdon and J.K. Dobbins to play key roles in The Game

Rivalry Week is underway and the nation's eyes are fixated on the 12:00 pm noon game between Michigan and Ohio State. With a spot in the Big Ten Championship Game and a likely spot in the College Football Playoff on the line, The Game will be the center of attention for the weekend's entire football slate.

While we've detailed how Michigan QB Shea Patterson can pace the Wolverines offense and how the Ohio State passing attack is the most formidable opponent the top-ranked Michigan defense will have faced, today we switch focus to the running game for each team.

When Michigan has the ball

Karan Higdon has been the heart and soul of the Michigan running game all season long, and there is no expectation for that to change against the fierce front the Buckeyes present. Higdon holds a 78.4 overall grade and has proven to be not only elusive this season (30 avoided tackles, which ranks T-seventh with his counterpart in Columbus, J.K. Dobbins), but explosive as well. He currently tied for sixth in the Big Ten with 24 runs over 10 yards and is dangerous when he gets to the second level. 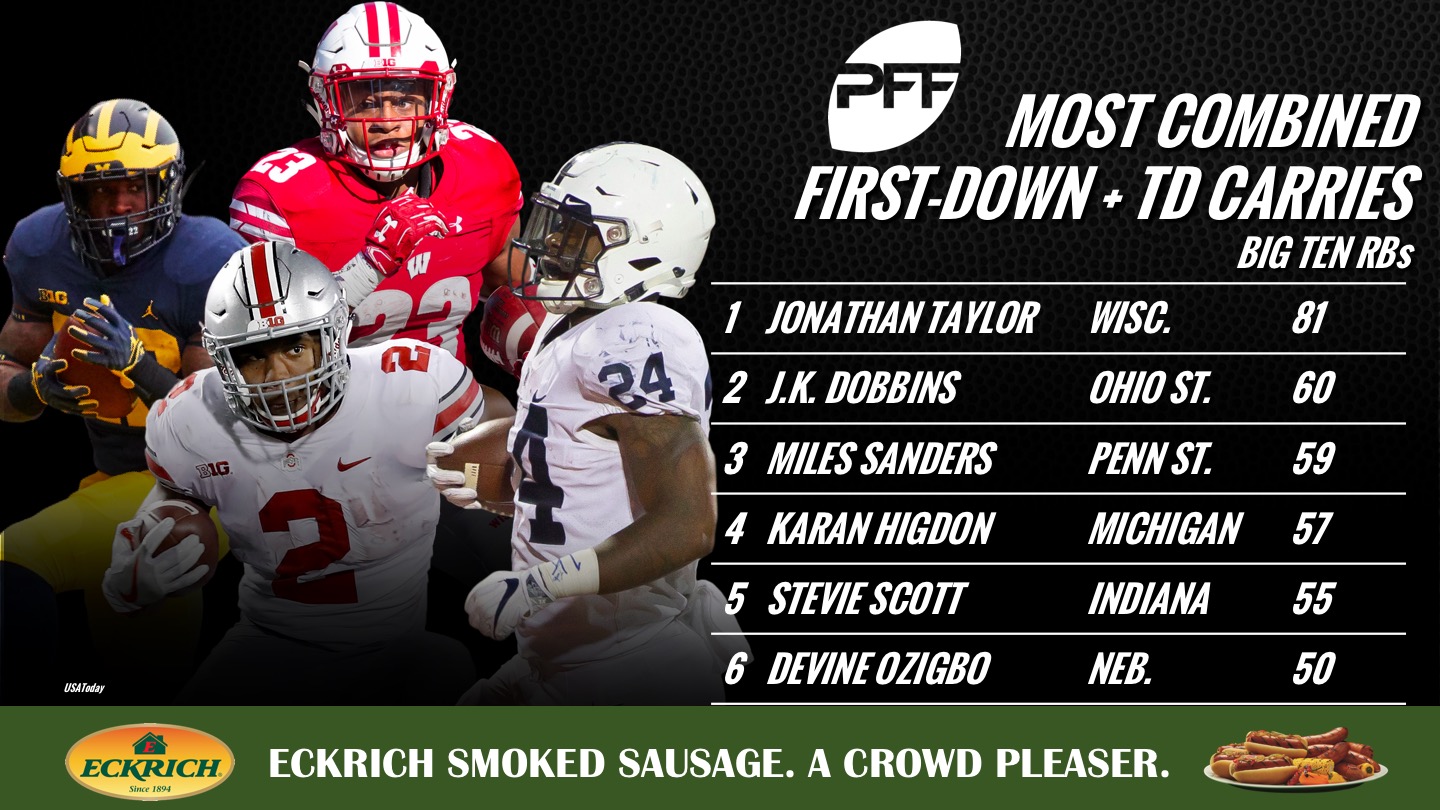 Containing Higdon will be key for the Buckeyes as they try to put the onus on the right arm of Shea Patterson. As a team, the Buckeyes have been stout against the run: they rank third in the B1G with a 93.3 overall grade and 26th nationally in stopping opposing running games. Leading the pack for the linebacking corps of the Buckeyes is Tuf Borland, only a sophomore who has made an impact throughout the defense this season. His 76.3 run-defense grade leads all OSU linebackers and is 14th in the conference among linebackers with at least 250 snaps. Borland saddles up alongside Malik Harrison and Pete Werner as Harrison leads the linebacking corps with 21 stops and holds a 68.5 grade against the run. Werner has seen the most snaps of all the linebackers with 645 and has garnered 14 stops in the run game en route to a 75.7 run-defense grade.

When Ohio State has the ball

The Buckeyes field one of the most dynamic playmakers in the Big Ten in J.K. Dobbins. Dobbins' overall grade of 77.1 is ninth in the B1G and he currently averages 4.7 yards per attempt. What makes Dobbins so dynamic isn’t just the running game, but what he brings in the passing game: He has seen 22 targets, caught 18 of them and is averaging 10.9 yards per catch with seven first downs and has a 119.1 passer rating when targeted. Mike Weber spells Dobbins and brings a similar skill set to the field as Dobbins. Weber has caught 16 of his 19 targets and is averaging 7.1 yards after the catch per reception. In the run game, Weber has been his usual dominant self: on 127 attempts, Weber has 24 avoided tackles, which is good for 10th in the B1G.

Prowling the second level for Michigan will be premier linebacker Devin Bush. A projected NFL talent, Bush has totaled an 86.8 overall grade, which is ranked fifth in the B1G. He has tallied 32 total stops to lead the Wolverines linebackers to go along with 20 QB pressures. Bush is a multi-tool linebacker, but he isn’t without help. Josh Ross and Devin Gil are two other players OSU will have to account for. Ross has the best run-defense grade on the team with an 84.5 grade and has totaled 16 stops while only missing two tackles. Gil has played the fewest snaps of the trio but has 10 stops with a 69.7 run-defense grade. As a team, Michigan ranks fifth in the B1G with a 92.4 overall grade and will make life difficult on Dobbins and Weber.

Either way it's sliced, the rushing attack and the ability of each team to stop the rushing attack will be a key matchup in The Game. Dobbins and Weber's ability in the passing game may go a long way in a game where Michigan's secondary is allowing the fewest yards after the catch to receivers in the nation.