This week in the SEC brought a ton of rain to the games in Athens, Georgia and Columbia, SC, as well as an upset in Nashville and another big ankle injury in Tuscaloosa. With Auburn set to visit LSU this week, Florida versus Georgia the following week, and then Alabama versus LSU on Nov. 9, the next three weeks are the big games that were circled on the calendar before the season even started. Before those games become the focus, we take a last look back at Week 8 in the SEC. 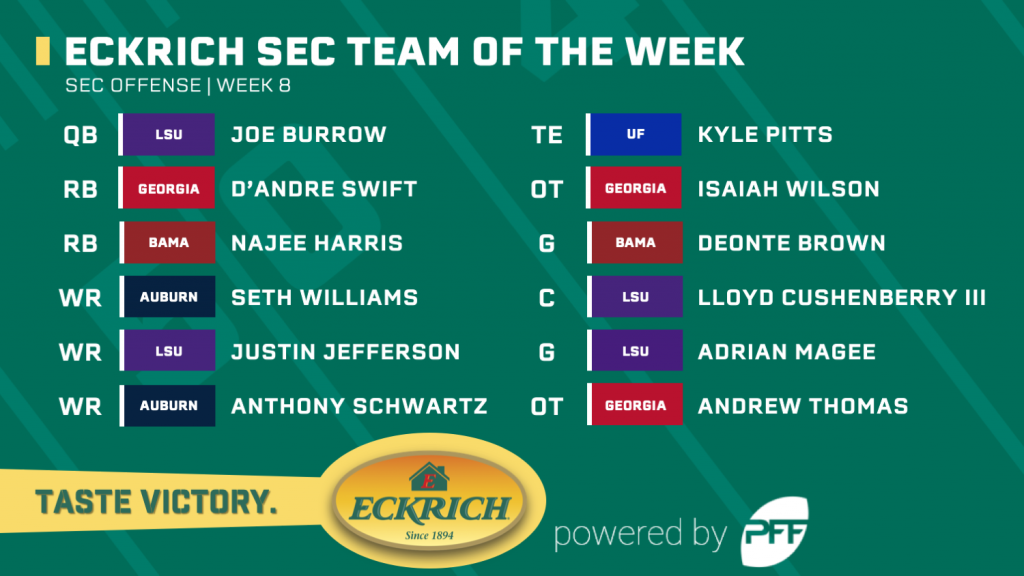 ‘Broadway Jeaux,’ as he’s been referred to, is becoming a fixture on this list. While his game grade was not as elite as it’s been in the previous weeks (77.2), Burrow still managed to throw for over 300 yards, four touchdowns and an 84.4 percent adjusted completion rate in the Tigers' victory over Mississippi State. Doing his damage down the field as usual, Burrow was 5-for-8 for 139 yards, and all four of his touchdown throws came on passes of 10-plus yards.

The weather in Athens basically removed the passing game from each team’s arsenal, and Georgia’s running game, led by their offensive line and Swift, took over in the second half. For the game, Swift (76.9 game grade) had 129 of his 179 yards come after contact, as he forced eight missed tackles, had six runs of 10 yards or more and scored two of UGA’s three touchdowns.

Harris was the focal point of Alabama’s offense, especially after Tua’s ankle injury, and took advantage of his opportunities. He forced 10 missed tackles on his 25 total touches, which included four receptions on four targets. In the run game, 58 of his 105 yards came after contact and he accounted for eight first downs and two touchdowns.

Williams has become a consistent target for quarterback Bo Nix. He caught four of six targets for 90 yards and two touchdowns for a 149.3 passer rating. In addition, all four of his receptions went for a first down or touchdown.

Jefferson continued his lights-out season by catching all eight of his targets for 89 yards, a touchdown and 152.6 passer rating when targeted. Five of those eight receptions went for first downs and he also forced three missed tackles.

The Tiger speedster hauled in six of his seven targets for 73 yards, a touchdown and a 149.7 passer rating when targeted. If not for a drop on his other target, Schwartz’s 80.0 game grade would have been even better.

In another rain-soaked game, Pitts caught five of seven targets for 29 yards and a touchdown.

Thomas and fellow tackle Isaiah Wilson (below) helped keep Jake Fromm clean and dominated in the run game during the rain-soaked game. Thomas did not allow a pressure on 15 pass-block snaps and helped pave the way for D’Andre Swift’s big-time performance.

A member of this week’s national team of the week, Brown dominated Tennessee’s defensive front in the running game (91.2 run block grade) and allowed only one quarterback hurry on 30 pass-block snaps.

Cushenberry III allowed one quarterback hit and one hurry on 42 pass-block snaps and anchored the middle of a line that kept quarterback Joe Burrow clean on 30 of his 36 dropbacks.

Magee allowed only one quarterback hurry on 32 pass-block snaps and, in addition helping his line mates, like Cushenberry III above, keep Joe Burrow clean, he had the Tigers highest run-block grade.

Wilson became the driving force for Georgia’s run game against Kentucky, especially in the second half. The Bulldogs went primarily outside zone against the Wildcats and Wilson led the way in what was the highest-graded game of his career (86.2). 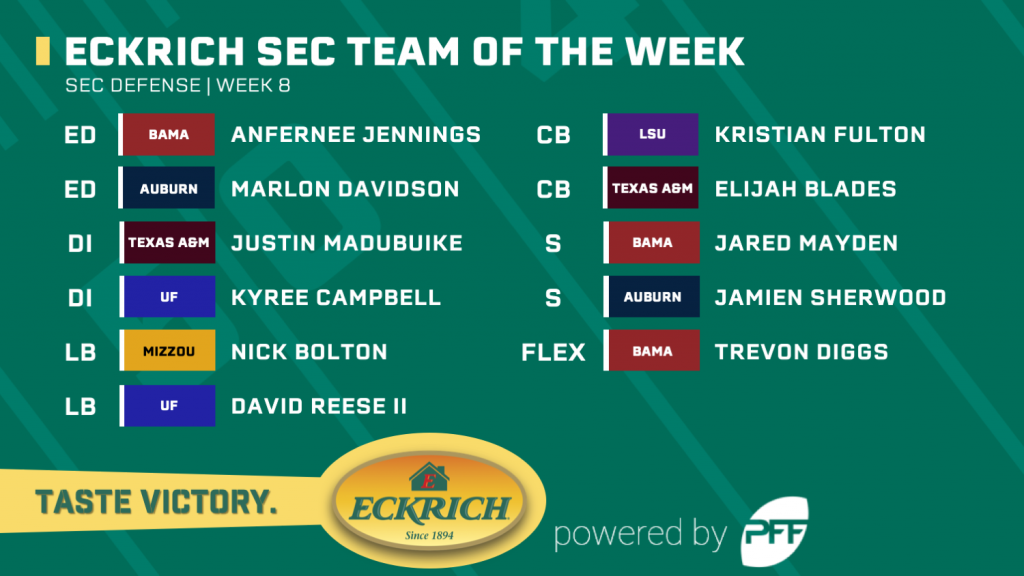 In addition to five stops in the run game, Jennings lived in the Volunteer backfield. He collected three quarterback hits and three hurries on just 19 pass-rush snaps.

Davidson dominated the Razorbacks on Saturday. He had five stops in the run game and a forced fumble while also collecting two sacks and a quarterback hit.

Madubuike has been a force during his time in College Station, but this past weekend earned him the highest game grade of his career (93.7). He had four stops in the run game and was dominant as a pash rusher, collecting seven total quarterback pressures (three hits and four hurries).

Campbell was the Gators' highest-graded defender against South Carolina. In his 32 snaps, he collected three stops, a quarterback hit and hurry.

Despite the loss, Bolton excelled for the Tigers’ defense. He collected eight stops and broke up the lone pass into his coverage.

Reese II had four stops and an elite 86.4 tackling grade. In addition, he allowed just 36 yards on four receptions into his coverage.

Also a member of PFF’s national team of the week, Fulton posted an elite game grade (88.1), only allowing one reception on five targets for 15 yards. In addition, Fulton picked up his first interception of the night and had two pass break-ups.

Blades did a little bit of everything for the Aggies this past weekend. In addition to allowing only one reception for 12 yards on three targets, Blades collected a stop, a sack and a forced fumble.

Mayden allowed just a 28.0 passer rating on seven targets into his coverage, including two pass break-ups and an interception.

Sherwood broke up the lone pass into his coverage and had two stops in the run game.

In addition to a pass break-up and a single reception allowed on two targets, Diggs put the nail in the coffin against Tennessee with his 100-yard fumble return for a touchdown that set the final 35-13 score.