The Week 8 Eckrich Team of the Week powered by PFF saw some impressive performances and, of course, the strength of opponent also factored into the overall selections as did the PFF player grades.

Hurts put on a clinic through the air and no matter the situation he was presented in on Saturday against West Virginia. Against the blitz, Hurts finished 6-of-6 for 87 yards and a touchdown while when he was kept clean from pressure, completed 10-of-11 attempts for 201 yards and two scores. He hit every level of the field with ease and looked dominant in doing so. He's making the race to the Heisman an interesting one with the loss of Tua to a high ankle sprain in Alabama's win.

Ripping off 192 yards on just 14 carries, Etienne's incredible 13.7 yards per carry led the nation's running backs by some margin. He racked up 151 yards after contact and broke a whopping nine tackles on his carries. With his quarterback not at his best, Etienne rolled the Tigers to victory.

In a vintage Dillon performance, the bruising running back led the Eagles offensive onslaught with 223 yards on the ground on 34 carries. He gained 140 yards after contact, breaking nine tackles in the process. Incredibly, he scored three touchdowns and moved the chains on 10 more of his carries in a dominant performance.

His teammate slid to No. 2 all-time on SMU's receptions leaderboard but Roberson had the most dominant day from a receiver in Week 8. Hauling in eight receptions for 251 yards and three scores, Roberson and the rest of the Mustangs offense are 7-0 for the first time since 1982. Roberson gained 67 of his yards after the catch and gained four more first downs on his catches as SMU is rolling into likely an AAC title game appearance.

Hamler shined on the national lights of Saturday Night Football and during their annual White Out game in Happy Valley. He was on the receiving end of six receptions, totaling 108 yards and two scores as he was truly the difference-maker for the Penn State offense in their win over Michigan.

Last year it was Rondale Moore for the Boilermakers but this year, in Moore's absence, it's David Bell stepping up as a true freshman. Bell hauled in 13 receptions for 197 yards and a score despite the loss to Iowa. After Iowa held Michigan and Penn State in check the past two weeks, Bell exploded against their stout defensive unit and hauled in a national-high 10 first-down receptions.

A reliable threat for his emerging quarterback, Kolar hauled in two scores for the Cyclones as all of his receptions against Texas Tech converted for Iowa State. He moved the sticks with another reception in the game, finishing with 79 yards on three catches and plus-grades in pass protection and in the running game.

Jones now finds himself in the lead for most nominations on the National Team of the Week with his fifth appearance to date. He was dominant against UConn, a common theme for his 2019 season. He didn't allow a single QB pressure and had the nation's second-highest run-blocking grade among tackles.

The Crimson Tide got a dominant performance from their guard as Brown finished with a clean sheet in pass protection while finishing with a top-five run-blocking grade among guards.

Smith and the Bulldogs were absolutely brilliant on Friday night as they got the win against UNLV. Smith led all centers with his 82.2 overall grade that included top-three marks in both pass protection and run-blocking. He didn't allow a single pressure and opened up big lanes for the Fresno State rushing attack.

Leading all guards in overall grade from Week 8, Connell was dominant up front for the Panthers. He finished with no pressures allowed in the passing game while he had the nation's highest run-blocking grade at the position.

Leading the country with a 91.0 pass-blocking grade, Sewell didn't allow a single pressure on his 39 snaps in pass protection, giving his quarterback ample time and reassurance from his blind side to make enough plays to get the win over Washington. Sewell also had plus-grades in the run game but his prowess in pass protection is where he shined on Saturday. 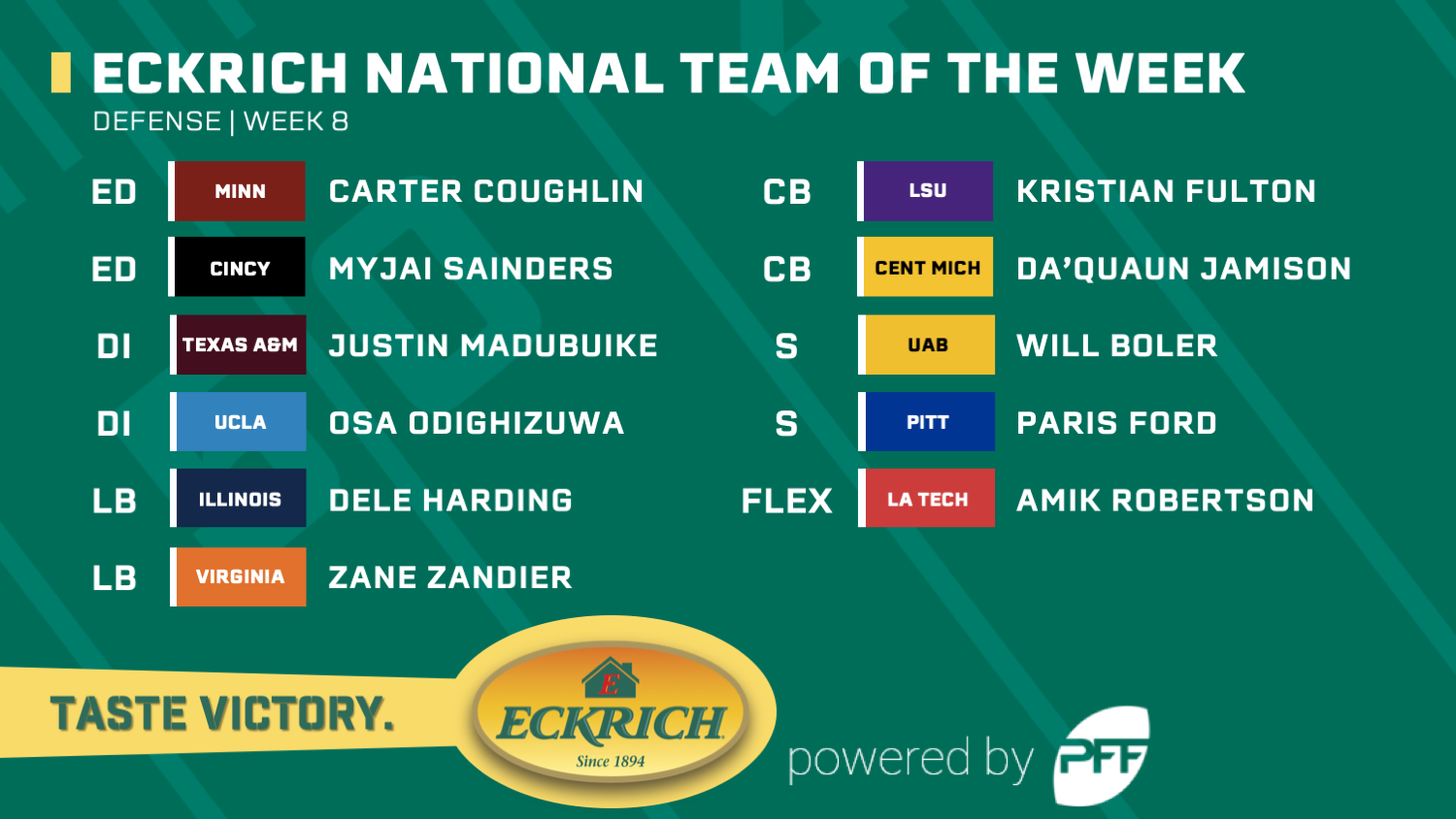 The Big Ten pass-rushers are coming on strong as we head towards the back-half of the season and Coughlin is another example of why we deemed the conference to have the best pass-rushers in the country entering the year. He finished with four total pressures on just 14 pass-rush attempts and racked up a forced fumble to go with two stops in run defense, rounding out a dominant day against Rutgers.

For the second week in a row, Sanders finds himself on this list as he racked up six total pressures including two sacks, a QB hit and three more hurries. He didn't miss a single tackle attempt, had a forced fumble and another stop in run defense as he is becoming arguably the most dominant player on the Bearcats roster.

The Aggies once again got a stalwart performance from their top player as Madubuike finished with seven total QB pressures on his 36 pass-rushes against Ole Miss. He racked up three QB hits and four more hurries while making four stops in run defense as he was nearly unblockable in all facets.

UCLA's performance on Thursday is not lost on us as Odighizuwa finished the contest with nine total pressures to lead all defensive players in Week 8. He finished the night with two sacks and two hits with five more hurries and two stops in run defense. An all-around strong game.

The Illini couldn't upset Wisconsin and not place someone on the National Team of the Week as Harding finds his way back to our list once again. He finished the afternoon with 13 total tackles and no missed attempts while seven tackles went down as defensive stops. He patrolled the middle of the field brilliantly and was integral in the upset of the Badgers.

Flying around the field with relative ease, Zandier racked up five solo tackles and four defensive stops all without missing a single tackle attempt. He wasn't targeted in coverage but his prowess against the Duke short-area passing attack saw him break up two different passes that weren't even thrown to his primary coverage as he stymied the Blue Devils in the middle.

Getting back to the dominant ways we saw in 2018, Fulton put forth a stellar effort in coverage against Mississippi State. He was targeted five times as the primary coverage defender, allowed just one reception for 15 yards while grabbing an interception and breaking up two more passes. In total, he allowed a 0.0 passer rating into his coverage and had the nation's second-highest coverage grade among cornerbacks in Week 8.

Speaking of dominance in coverage, Jamison was all over the field and on five targeted passes himself, he allowed just 45 yards and came away with two interceptions. He also chipped in with two defensive stops and four QB pressures while not missing a single tackle attempt.

The Blazers defense held Old Dominion to 150 total yards of offense and had multiple takeaways as Boler himself finished the night with an interception, two pass breakups and no missed tackles. The entire UAB defense played a terrific game but Boler stood out.

Making another appearance on our list here, Ford came away with top-five marks in the country in coverage and tackling among all safeties as he didn't miss a single tackle attempt on Friday evening against Syracuse. He broke up the lone target into his primary coverage and forced a fumble to boot in another strong outing.

Robertson may have missed a few tackles on the night but his day in coverage was more than enough to get him here. On seven targeted passes thrown his way, he finished the game with three interceptions and an additional pass breakup as he single-handedly ended multiple drives against Southern Miss.