The Week 8 Eckrich Big-12 Team of the Week powered by PFF saw some impressive performances and, of course, the strength of opponent also factored into the overall selections as did the PFF player grades. 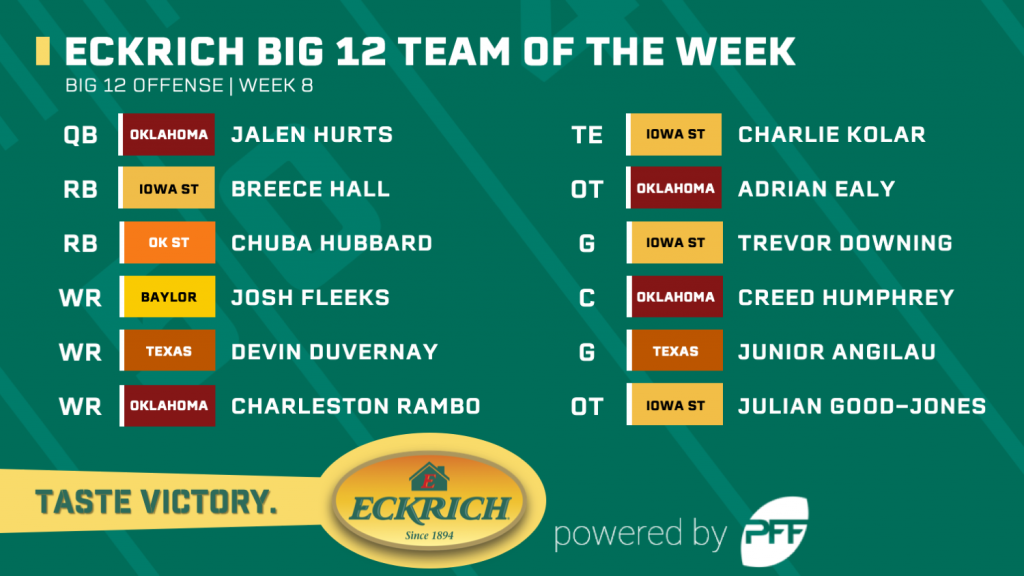 Jalen Hurts could seemingly do no wrong on Saturday against West Virginia. He made the most of his 17 passing attempts, completing 16 of them for 316 yards and three touchdowns. And 15 of those completions went for first downs, leading Hurts to a stellar 95.4 game grade that led all FBS quarterbacks in Week 8.

With 183 yards on the ground, Breece Hall ranked fifth among FBS ball-carriers in Week 8. He accomplished the feat through bursts of chunk-yardage, racking up five runs of 10-plus yards. And 143 of his rushing yards came on plays where he gained 15 or more yards, the second-most among running backs this week.

A frequent feature on the Big 12 Team of the Week, Chuba Hubbard's Week 8 effort again slots him in familiar territory. Hubbard went over 100 yards for the fifth straight game as he continued to serve as Oklahoma State's bell-cow back. Hubbard continues to lead FBS running backs in carries — now with 194 — and has proven he'll continue to do damage on those touches.

Josh Fleeks had somewhat of a breakout game against Oklahoma State despite seeing just three targets. What he did on those minimal passes thrown his way, though, earned him a spot here. Fleeks used his speed on a catch over the middle, outrunning the Cowboys' secondary for a 64-yard score. For the day, he finished with three catches for 126 yards and the aforementioned touchdown after having just 43 yards total on the season entering Saturday.

Six of Devin Duvernay's eight catches in Week 8 went for first downs, with two going a step further for touchdowns. That culminated in a 152.1 passer rating when targeted, which ranked third among Big 12 wideouts this week.

Charleston Rambo was one of two Big 12 wideouts to post a perfect passer rating when targeted (158.3) in Week 8, doing so with five catches on five targets for 96 yards, a touchdown and four first-down receptions.

After a meager Week 7 from Big 12 tight ends, Week 8 proved to be quite the opposite. Three tight ends notched passer ratings when targeted of 100.0 or higher, including Charlie Kolar. The redshirt sophomore hauled in two touchdowns on just three catches, cementing his spot on this list for a second straight week.

On the heels of one of his best games this season, Trevor Downing finds himself on the Big 12 Team of the Week for the second time this season. He allowed a single quarterback pressure, propelling him to an impressive 83.2 pass-blocking grade.

Creed Humphrey's first-round talent continues to flash, as he — yet again — surrendered no quarterback pressures. It was the fourth straight week he did so, and the sixth out of seven games this season. By this point, he's undoubtedly cemented himself as one of the nation's top centers.

With the second-most pass-blocking snaps of any Big 12 guard in Week 8, Junior Angilau didn't flinch. He kept a clean pocket for the entire game — and for the first time since Week 1.

Both run-blocking and pass-blocking were strengths of Julian Good-Jones on Saturday, as he allowed a single quarterback pressure and helped spring running back Breece Hall to 183 yards on the day. 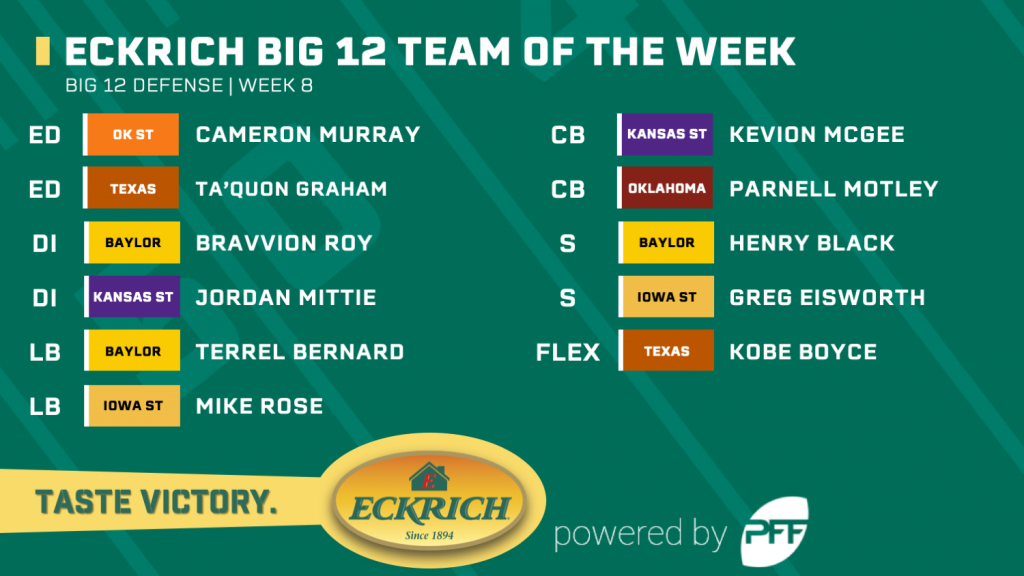 Cameron Murray tallied his first sack of the season Saturday, one of his two quarterback pressures on the day. In the run game, he contributed a stop on 21 snaps.

Despite not finding the stat sheet in the pass-rushing game, Ta'Quon Graham was a force in the run game, where he earned an 80.7 grade (12th among FBS edge defenders).

If Baylor was on defense, Bravvion Roy was making a play. He led all Big 12 interior defenders in Week 8 with five quarterback pressures. And he led them in stops, too, posting a career-high six of them.

While Jordan Mittie's performance was the watered-down version of Roy's, it was nonetheless impactful. He had two quarterback pressures in Week 8 and topped it off with two tackles and a stop.

Terrel Bernard led all Big Ten linebackers in overall grade (79.9) in Week 8 — and for good reason. He notched a quarterback hit and hurry while posting five defensive stops on the day in his team's 45-27 win over Oklahoma State.

In Iowa State's 34-24 victory against Texas Tech on Saturday, Mike Rose did it all. He pressured the quarterback four times, had five defensive stops and allowed two receptions for just one yard.

When a starting cornerback finishes a game without allowing a reception into his coverage, it's a pretty solid performance. McGee did just that, breaking up one of the two targets that came his way Saturday.

Parnell Motley faced four targets, allowing just one to be caught — and it was behind the line of scrimmage. Motley also tallied a pass breakup, building off his performance last week when he surrendered a single completion on three targets.

It was a mini no-fly zone into Henry Black's coverage on Saturday, as the senior defensive back broke up two of the three targets he saw. On the other, he allowed a two-yard completion. On the season, Black has allowed just 50% of targets into his coverage to be completed.

Through eight weeks, Greg Eisworth is the second-highest graded safety (82.0) in the Big 12. The only completion he allowed in Week 8 went for -2 yards, and he added four tackles and two stops onto his stellar day.

Kobe Boyce had seen limited time in coverage in Weeks 3-7. But in Week 8, his coaches put their faith in him on 24 coverage snaps. Boyce didn't disappoint, surrendering zero completions on three targets and breaking up one pass.