The Week 2 Eckrich SEC Team of the Week powered by PFF saw some impressive performances, and after our team of over 500 analysts graded every single player on every single play of every game, we give you the top players from the weekend. 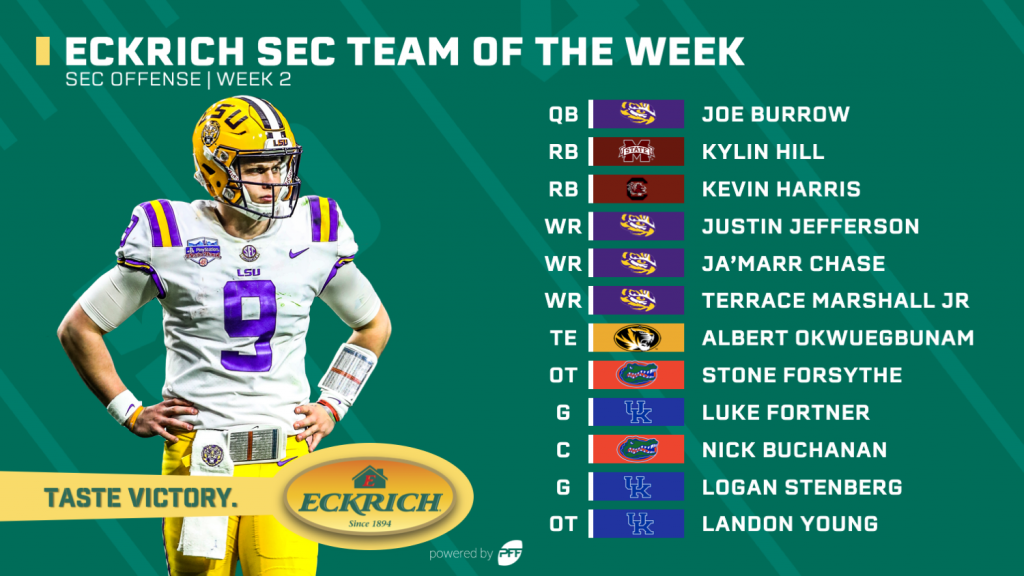 He was lights out on passes targeted 10 or more yards downfield and even finished as the weekend's #GameDayMVP. Burrow lit up the Texas defense and thrust his name into Heisman contention on Saturday night.

Before exiting with an injury, Hill made one of the best runs you'd find any week of the season, spinning off defenders and even hurdling a defender before going down. He finished the afternoon with 123 yards on 14 carries and nine broken tackles.

The Gamecocks rushing attack was ridiculous against Charleston Southern and picking one of them became difficult. Harris saw action late in the game and on just six carries, he led the SEC with 147 rushing yards. He broke a tackle per carry and gained 134 yards after contact.

The efforts from the LSU receiving corps did not go unnoticed by any fan watching the game on Saturday night, as they made history by having three receivers go over 100 yards through the air. Jefferson was the most impressive of the trio, hauling in a conference-best 163 receiving yards.

Chase made multiple contested catches in the game against Texas, finishing with 150 yards on nine receptions. Of his nine receptions, five converted a first down while he secured a touchdown grab to boot.

Marshall hauled in 100% of his targeted passes on the afternoon, finishing with six receptions for 123 yards and a score. He saw a perfect 158.3 passer rating on those throws as five more moved the chains for first downs.

Albert O had one of the more acrobatic catches of the weekend, hauling in a perfectly placed ball from Kelly Bryant and toe-tapping across the pylon for a score. He pulled in another score as well and led the conference with two total TDs.

Forsythe was absolutely dominant against UT-Martin. On 34 snaps in pass protection, he didn't allow a single pressure and fired off for the run.

Kentucky fields three offensive linemen on the SEC Team of the Week, kicking it off with Fortner, who had the conference's highest run-blocking grade for a guard.

On 34 snaps in pass protection, Buchanan did not allow a single pressure and finished the weekend with the SEC's second-highest run-blocking grade among centers.

Stenberg continues the Wildcats on the list, finishing with the second-highest run-blocking grade from a guard and a clean sheet in pass protection on 34 pass-blocking snaps.

A common theme, Young is another Wildcat on the list as he finished with the SEC's second-highest pass-blocking grade from a tackle this weekend. 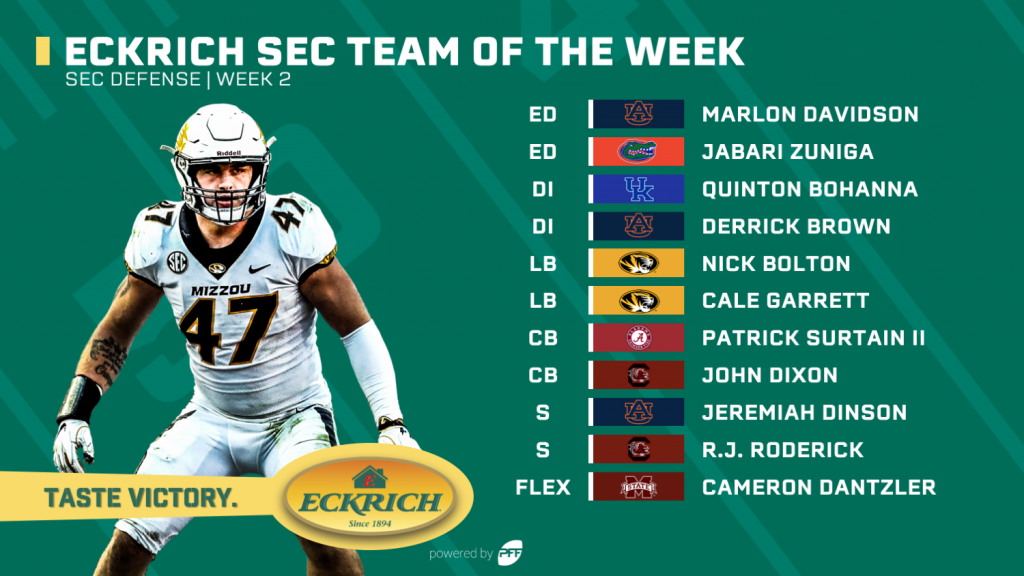 On 31 pass-rush attempts, Davidson got home with six pressures while recording two more defensive stops against the run. He did all this without a missed tackle.

Continuing his hot ways, Zuniga finished the game with four total pressures, two of them sacks on just 16 pass-rushes. He needed limited time to showcase just how dominant he can be,

Dominant in the pass-rush, Bohanna only registered two pressures but had multiple wins in the passing game and was unable to record pressure due to quick passes.

Brown was a force — per usual — up the middle, seeing multiple double teams but still racking up four total tackles, three of them going for stops.

The duo at linebacker for the Tigers may be leaned upon heavily through SEC play as they dominated West Virginia. Bolton made two interceptions, one of them a pick-six, and he had multiple plays on the ball elsewhere in coverage and against the run.

Garrett did it all over the field for Missouri, recording three pressures, five defensive stops, a pass breakup and allowing just 14 yards on 25 snaps in coverage.

Surtain forced a fumble on a downfield tackle and looked strong as the primary coverage defender against New Mexico State. On four targeted passes, he allowed just one reception for nine yards and had an interception and a pass breakup.

The Gamecock secondary took full advantage of lesser competition as Dixon didn't allow a single reception while grabbing an interception of his own. He allowed a 0.0 passer rating on throws into his coverage for the contest.

Seeing three passes as the primary coverage defender, Dinson made an interception while allowing just one reception for a total of five yards. He totaled six tackles as well, without a single whiff.

Fielding three targets in coverage, Roderick allowed two receptions for a whopping five yards with an interception. He made a stop and had elite coverage grades on the afternoon.

Dantzler's coverage was so sticky that he saw only one target come his way against Southern Miss, breaking that pass up in the process. He was in great position across the board and looked strong in run defense as well.