The Week 2 Eckrich ACC Team of the Week powered by PFF saw some impressive performances, and after our team of over 500 analysts graded every single player on every single play of every game, we give you the top players from the weekend. 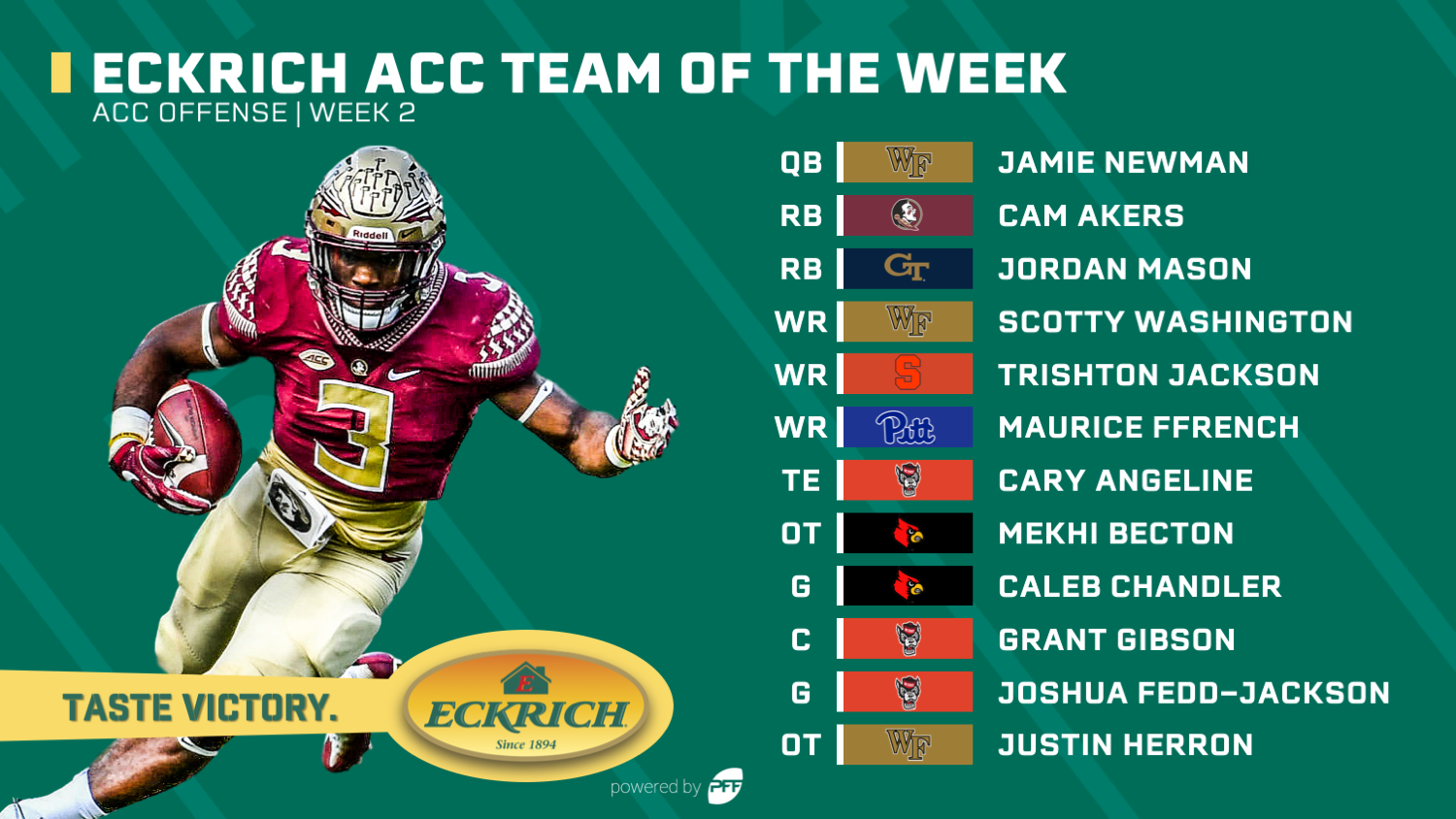 Newman was lights out on Friday night against Rice, uncorking two big-time throws and averaging 12.2 yards per attempt. He completed 20-of-26 passes for 317 yards, the second consecutive game, giving the Demon Deacons quite the jolt as they open ACC play next week against upstart North Carolina.

Akers was not at fault for the Seminoles near-defeat as he led the nation in carries with 36 and missed tackles forced at 11. He was truly a grinder for FSU as he converted 16 combined first downs and touchdowns on his carries.

Coming on strong for the Yellow Jackets as they adjust to their new offense is Mason as he's now forced 19 missed tackles on the ground, already surpassing his season total from a year ago.

Save for a bad drop, Washington was dominant on Friday night, using his huge frame to grab seven receptions for 158 yards and two scores. He brought down all five of his contested targets in the game and averaged a ridiculous 22.6 yards per catch.

Not lost in Syracuse's loss at Maryland was Jackson's performance as he had three explosive plays of 15 yards or more and finished with seven catches for 157 yards. With two scores and three more first-down receptions to his credit, he's emerged as potentially Syracuse's top receiving option.

Ffrench was targeted 13 times in Pitt's victory over Ohio early on Saturday, grabbing a conference-high 10 receptions for 138 yards. Of his 138 receiving yards, 91 of them came after the catch and he forced three missed tackles in a strong outing.

Angeline turned five targets into four receptions for 48 yards and a score. Two more of his receptions churned out first downs and he ground out another 24 yards after the catch on the afternoon.

Dominant throughout the whole outing, Becton kept a clean sheet in pass protection on 23 pass-blocking snaps while he had the conference's best run-blocking grade by a clear 15.0 grade points.

Another Cardinals o-lineman to be represented, Chandler also had a strong game with just a single QB hurry allowed in the passing game but had the conference's second-highest run-blocking grade among guards as well.

The NC State offensive line factory is open once again as Gibson put forth plus-grades in pass protection and for the run as he finished with the ACC's best run-blocking grade by some margin.

The conference's top pass-blocking grade to his name, Herron saw 29 snaps in pass protection without allowing a single pressure. 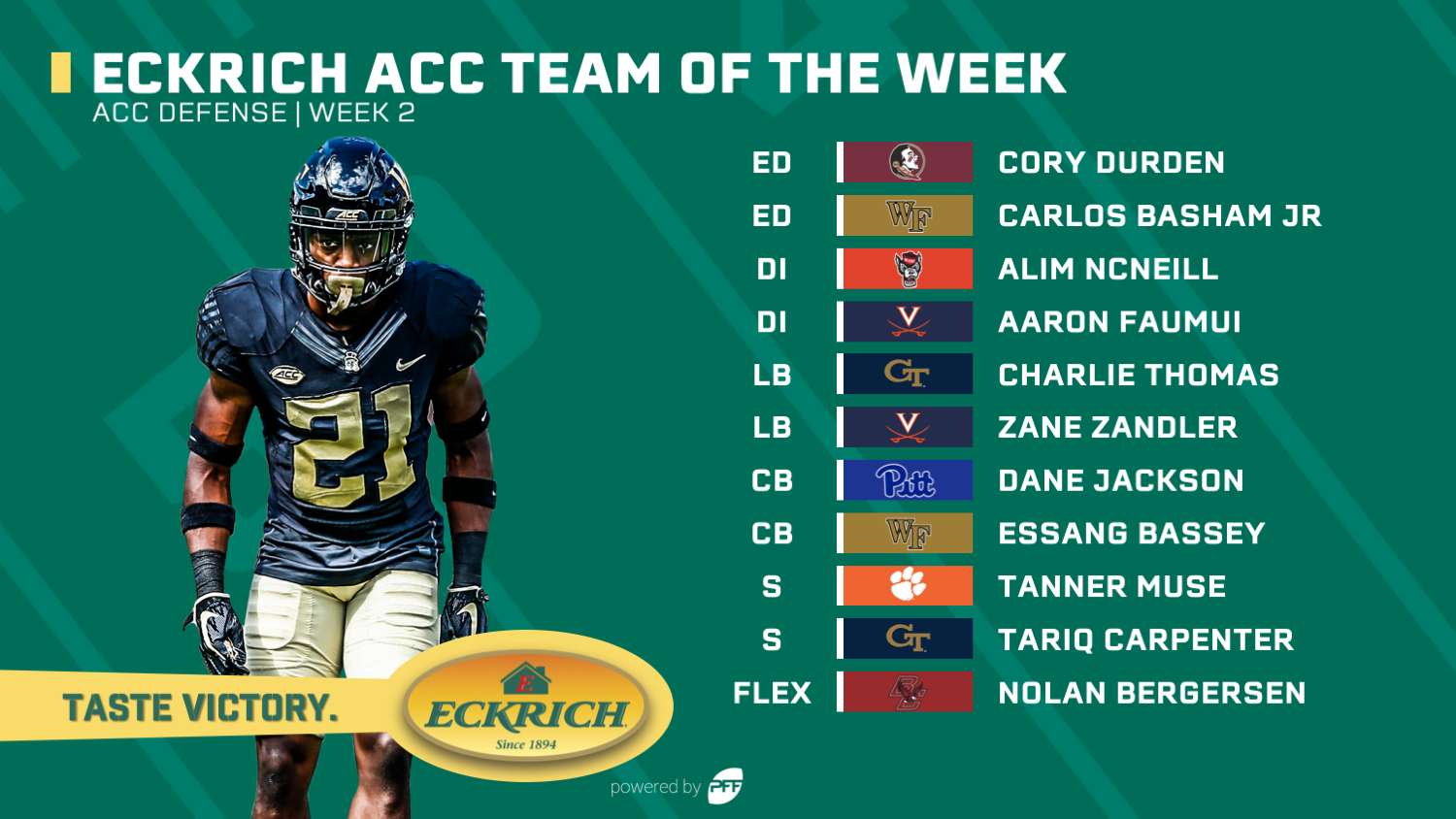 Anytime you allow 44 points and are forced to overtime, it's hard to see why a defensive player would make this list but Durden did all he could for FSU. On his 33 pass-rushing snaps, he recorded seven pressures including a sack, a QB hit and five more hurries. He made five defensive stops, forced a fumble and didn't miss a single tackle in a potential breakout performance.

Rising up the charts of ACC edge defenders, Basham put forth another dominant outing on Friday against Rice. He recorded four pressures, three defensive stops and a forced fumble with multiple more pass-rushing victories that saw the ball get out quicker than he had the chance to record pressure.

The Wolfpack defensive tackle led the conference with his pass-rushing grade from this weekend, recording a sack in the process. He also had plus-grades across the board that saw him nab another three defensive stops.

Faumui led the conference with two sacks from the defensive interior doing all his damage on the afternoon without missing a single tackle as well.

Making our National Team of the Week, Thomas is a reliable piece of the front seven of the Yellow Jackets who can be relied upon as he made four defensive stops, two sacks, seven total tackles and a forced fumble with strong grades in coverage as well.

On 34 snaps across the defense for the Cavs, Zandler brought home two QB pressures, six total tackles, six defensive stops and didn't miss any of his tackle attempts in a great all-around performance.

It was apparent that Ohio QB Nathan Rourke was not well in this game but Jackson made it even worse when Rourke looked his way in coverage. On 24 coverage snaps, Jackson was targeted just once and broke up the lone attempt his way and made a defensive stop in the run game to boot.

The Demon Deacons spot Bassey on our ACC Team of the Week yet again as he saw a whopping six targets while allowing just one lone reception for a lowly 16.9% completion percentage in his coverage.

Finishing the game with an interception in the red zone that thwarted a Texas A&M drive, Muse's all-around performance garnered elite grades. He made two defensive stops in the run game and an additional pass breakup as he flew all over the field for the nation's No. 1 team.

Of his seven solo tackles in the contest, Carpenter recorded six defensive stops to keep USF off their gameplan on offense. He allowed a touchdown in coverage but was sharp outside of that, sharp enough to warrant his spot here.

On just 28 snaps, Borgersen was ultra-impressive with a strong performance in coverage. He saw two targets as the primary coverage defender, intercepting one and allowing one reception for just six yards.