A study in social distancing: How LSU isolated Ja'Marr Chase in a unique environment

Opponents of the LSU Tigers football team will have wished social distancing guidelines had been in place as early as the 2019 season. Social distancing, after all, might have been their only recourse against the historic LSU attack that broke league and national records before culminating in a national championship, a Heisman Trophy for quarterback Joe Burrow and a Biletnikoff Award for wide receiver Ja’Marr Chase.

The LSU offense came into the season under new passing game coordinator Joe Brady with a devilish plan to isolate their best receiver. Simply by cutting down the distance between the receiver and the quarterback, LSU multiplied its attack. With the Tigers using talented true sophomore Ja’Marr Chase as their “X” receiver when they would go into any sort of Trips formation, they would isolate Chase to the weak side of the field.

Trips sets are not uncommon. In fact, there were over 36,758 plays run in the FBS last season in either of those two formations. Where LSU found an advantage, though, was by scoffing at any social distancing measures by aligning Chase closer to Burrow. 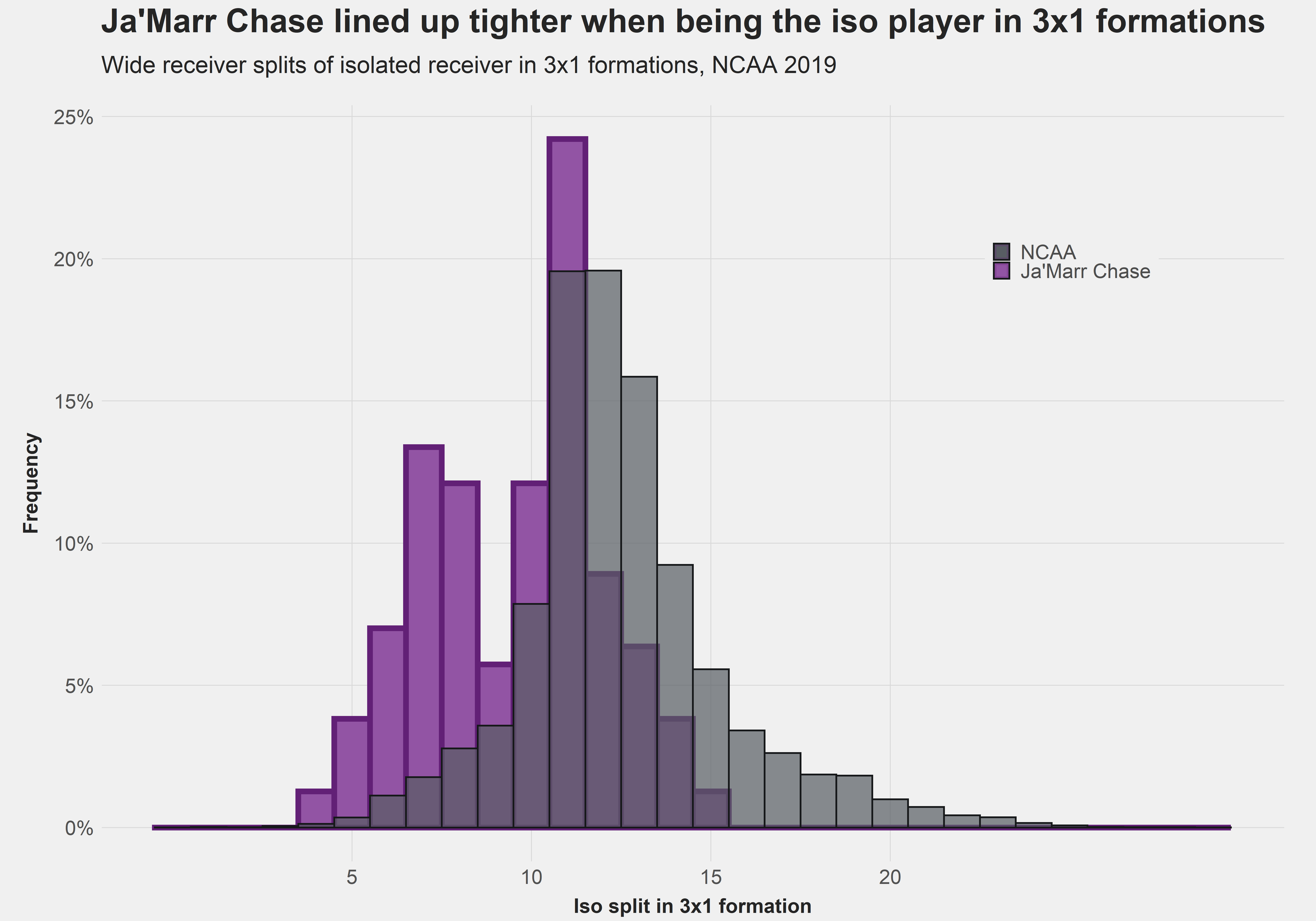 Chase posted a whopping 88.1 receiving grade in these formations and 3.62 yards per route run. He was simply uncoverable.

Aligning Chase tighter to the middle of the field allowed LSU to get into some of its better passing concepts because Chase was able to run outside breaking routes. His socially distanced X receiver peers who lined up in a more common position outside didn’t have that luxury with how close they were to the sideline.

From their “trips open” formation, the Tigers opted to protect with only the five offensive linemen and send their running back on a free release pass concept as often as possible. Their favorite concept was this “smash drive” play.

LSU would run a vertical out-breaking route from its X receiver and a flat route, generally by the running back to the same side. This combination would be paired with a route concept composed of in-breaking routes from the other side of the field.

Concepts like this allow the quarterback to start reads on one side of the field and scan back to the other side as routes break and receivers become available to him. He doesn’t have to bounce his eyes from side to side. The routes come into his vision as he scans from left to right or right to left.

Burrow will look to throw the corner route to Chase off three dropback steps and one or two hitches. Generally, his decision to throw the route will be made once he hits the last step of the drop and the hitches forward allow the receiver time to get out of his break.

If the quarterback doesn’t like the corner route when he hits the end of the three-step dropback, he can fire the ball in the flat to the running back if it’s open or move his eyes inside while hitching up looking for the shallow drag route.

If that route is covered, he can hitch again to find the intermediate in-breaking route (often called a dig or basic route).

While both the corner and dig have route breaks at the same depth, the timing still remains staggered because the corner runner can accelerate through the route break while the dig runner must stop his momentum and restart on a new path perpendicular to the line of scrimmage.

This concept made up about 18% of the total dropback passes where LSU was in this trips formations with Chase on the field.

LSU’s progression off this concept was its running back option or angle route. Chase, again, worked downfield on a corner or out-breaking route to pull the defense out. Now, instead of running to the flat, the running back showed the flat route before putting his foot in the ground and angling back toward the middle of the field.

Together, these concepts were used about 32.5% of the time by the Tigers as part of their dropback passing game from trips formations. Clearly, this was a big part of their gameplans. While Chase’s receiving grade is a modest 70.4, his gravitas allowed running back Clyde Edwards-Helaire to post an 80.2 grade with seven forced missed tackles on 16 catches. Most defenses countered Chase’s alignment by playing a safety inside of him and the cornerback outside of him, essentially doubling him.

When LSU brought the tight end back into the formation as part of a TE Trips, Chase shined as he put up an elite 90.2 receiving grade.

With LSU's offense having an extra potential blocker with the tight end, it could run its deep play-action shot game, protect with seven players and let Chase work one-on-one down the field.

Passing game coordinator Joe Brady, formerly of the New Orleans Saints, borrowed this “doubles” concept from his former boss Sean Payton. In TE Trips, LSU ran this 37% of the time.

The inside route is always the same middle read, but the outside routes can be tagged with whatever the coaches are looking for.

The final piece of the puzzle comes together when looking at LSU’s main RPO concept from the isolated Chase alignment. With Chase’s corner route often breaking off to the sideline on his five-step, LSU needed a route that had the same vertical steam but broke off to the inside. The Tigers decided to pair their RPO’s with a glance post route from their isolated receiver. The glance post is a five-step, inside-breaking slant route designed to punish defenses that drop their weakside safety down into the box to stop the run.

Because of Chase’s tight alignment, if the receiver’s defender was already off and inside in a position to take away the glance route, Chase could run a quick-hitting out route into space. Burrow wouldn’t even ride the running back — he would just take the snap and throw it out to Chase.

LSU’s RPO game out of these trips formations was lethal, as it finished 11th in the country in EPA/play (.256) of teams with at least 25 snaps in the formations.

This lack of social distancing between quarterback Joe Burrow and “X” receiver Ja’Marr Chase might be frowned upon now, but it produced jaw-dropping results in the 2019 season. Giving Chase a two-way go gave him the ability to run a bevy of routes and allowed LSU to get into its favored pass concepts.

Regardless of alignment or formation, Chase’s 91.3 receiving grade ranked third overall in the country for receivers with at least 100 receiving snaps. The true sophomore was dominant from almost every position and against any defensive alignment. His play against press coverage stands out, as he led the country in catches (38), yards (870) and touchdowns (10) against the press. The 2020 campaign looks again to be a strong year for the reigning Biletnikoff Award winner.