“Who is going to get exposed is the LSU quarterback [Burrow]. He’s not very good. He’s average. He’s a general and a game manager…” – Anonymous SEC Assistant on Joe Burrow prior to the 2018 matchup between LSU and Alabama.

Joe Burrow has come a long way. The former Ohio State Buckeye transferred to LSU after getting beat out by 2019 first-round pick Dwayne Haskins following the 2017 season. He then had an average year as the Tigers' signal-caller in 2018 and was subsequently deemed a late-round/undrafted prospect.

Then the 2019 season happened.

After earning an FBS-high PFF grade of 94.3, an undefeated 12-0 record and the number one overall spot in the College Football Playoff, Burrow has become a shoo-in to be the first overall pick in the 2020 NFL draft. Which, in turn, left football fans from all over wondering the same thing: How?

Using PFF’s advanced database and unique grading system that is used by all 32 NFL teams and 70 FBS programs, we can answer this question — but before we get to Burrow, let’s go over the schematic change that improved both phases of rushing and passing.

The LSU program underwent a change in offensive philosophy before the start of 2019 by bringing in the former New Orleans Saints offensive assistant, Joe Brady, to be the new passing game coordinator and wide receivers coach. In his move from New Orleans to Baton Rouge, Brady brought with him the spread offense with West Coast offense roots — something drastically different from what they were accustomed to. It ultimately paid massive dividends, as they jumped from 53rd in expected points added per play in 2018 to first in 2019 (also known as EPA, expected points added puts yards gained on a play into context like down, distance and field position to give the best measure of per-play efficiency). 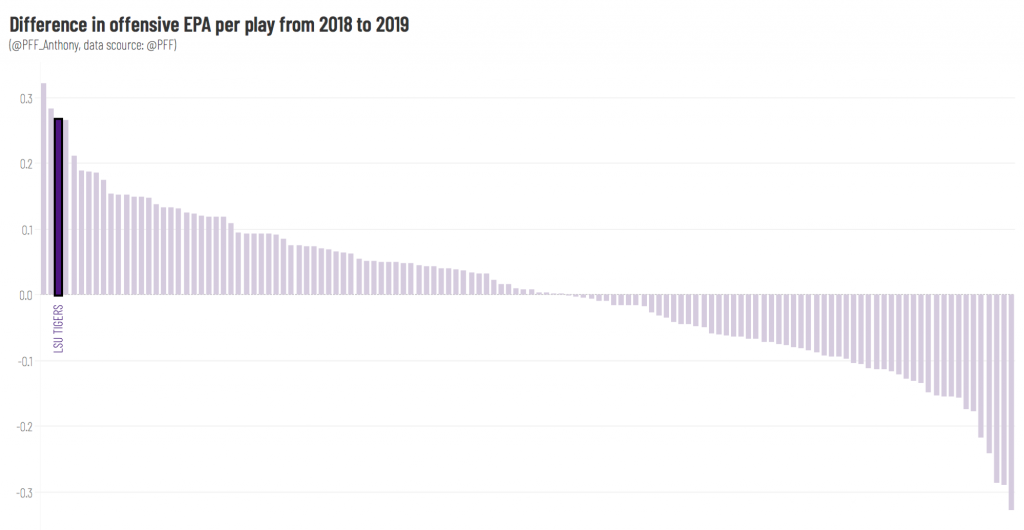 Brady and offensive coordinator Steve Ensminger put a heavy emphasis on increasing their run-pass option (RPO) from 11.5% in 2018 (over 7% below average) to 22.1% in 2019 (half a percent above average).

As a refresher, an RPO is a play where the offense can either run or pass, with the decision depending on certain factors. That decision is left up to the quarterback and can be made either pre- or post-snap. This change, as expected, vastly improved their rushing attack. On plays where the RPO ended in a hand-off to the running back, LSU average 7.0 yards per play — over 2.3 yards more than on non-RPO rushing plays. That figure also ended up ranking fourth among 130 FBS offenses.

Running back Clyde Edwards-Helaire has thrived from the switch in their rushing approach, earning the fifth-highest PFF rushing grade in the FBS at 90.8. He's forced the 11th-most missed tackles per attempt at 0.32 and produced a solid first down or touchdown rate of 36%.

All in all, their rushing attack went from 66th among the 130 FBS teams in EPA per rush last year, at -0.028, to second in 2019 at 0.056. In fact, their running game is more efficient than more than half the teams in the FBS are passing in regard to EPA per play. However, as successful as this all is, the change in their rushing offense only shows that they aren’t losing expected points when they run the ball — it doesn’t explain their overall success. What does explain it, however, is the change in passing offense and improvement of Burrow.

As I mentioned earlier, Brady brought the spread offense with a West Coast flair down to the Bayou, which means more three wide receiver sets (i.e., more plays in 11 personnel) and increased usage of horizontal routes like crossers, in routes and slants.

From last year to this year, LSU’s usage of 11 personnel has increased by nearly 20%, and they've virtually eliminated plays from 10 personnel (10% to 0%) and 21 personnel (22% to .6%) packages. Additionally, Brady and company have nearly wiped out any plays under center this season. Last year, 33% of the Tigers’ plays were executed in non-shotgun formations. This year, just over 3% of their plays have not been in shotgun.

“Yeah, I’m fired up about it. This is the kind of offense I’ve run since I was 13, 14 years old, so this is what I know so I can have a lot of input in it and tell them what I like.” – Joe Burrow on the new offense before the start of the 2019 season

As you'd expect, the data shows exactly why he was fired up about the change. Burrow has substantially increased his usage of horizontal lead passes (throws that lead the receiver across the field), ending the season with the third-most attempts to such routes. On these throws, he has put up an adjusted completion percentage that’s 4% higher than anyone else (88.5%), along with an uncatchable-pass rate that’s over 2% less than anyone else. His 10.5 yards per attempt on these throws ranks third.

This type of offense can sometimes be referred to as “safe,” and the quarterback will sometimes be labeled as a “game manager,” but that’s far from the case. Burrow can take these throws deep, and when he does, he’s about as perfect as one can be. When attempting a horizontal-lead pass 15 or more yards downfield, Burrow completed 22-of-27 pass attempts for four touchdowns; he's averaged 21.0 yards per attempt and recorded a perfect passer rating of 158.3. Along with that, Burrow can get dirty with the vertical route tree — he has only 23 such attempts this year but has completed 18 of those for 519 yards, 10 touchdowns, a perfect passer rating and not a single turnover-worthy play.

The motives behind all the offensive changes were to make the offense quicker, remove max-protection concepts, put as many routes on the field and spread their skill positions out to give them space to make explosive plays — all of which came to fruition in 2019.

Burrow has the third-most attempts in a quick-game offense, and in that offense, he has a touchdown to interception ratio of 11:0 while producing 8.1 yards per attempt and a 136.4 passer rating. Safe to say, he is thriving in the up-tempo offense.

Last year, the Tigers had over 300 dropbacks on which they had six or more pass-blockers, but they lowered that number to just 89 in 2019. Brady hit the nail on the head here. Not only does LSU bring in more EPA per play with five or fewer pass-blockers compared to plays with six or more, but they are allowing a pressure rate that’s 6% less with five pass-blockers.

This change has catered to the strengths of LSU wide receivers Ja’Marr Chase and Justin Jefferson, who have been arguably the best pass-catching duo in the FBS this season — they are just one of two duos to rank among the top 25 in PFF grade at the position.

In his second-year, Chase has put up the nation's third-best PFF receiving grade (91.3) while producing the fourth-most broken tackles (21), sixth-most yards per route run (3.64) and 14th-best passer rating when targeted (140.2). As Burrow’s primary vertical receiving option, he has gathered 20 deep (20-plus yard) catches (four more than second), 699 deep receiving yards (79 more than anyone else) and 12 deep touchdowns (four more than anyone else).

There also couldn’t really be a better fit in a horizontal attack than Justin Jefferson. Jefferson is the nation's third-highest-graded receiver (93.6) when running a slant, in route or crossing route — he's caught 31 of his 41 targets for 626 yards (100 more than anyone else), and he has the most explosive plays and most first downs on those targets.

Joe Brady has brought a scheme that is catered to the strengths and experience of Joe Burrow, and the Tigers do indeed have one of the nation’s best receiver tandems, it's Burrow who deserves the credit for LSU's success this year. He is not a game manager, nor is he a one-hit-wonder — he has more than proved that this season.

Burrow wasn’t terrible in 2018, but he wasn’t looking like the future first overall pick, either. Burrow's PFF grade ranked 35th among quarterbacks, and he did record 24 big-time throws, but he also put the ball in harm’s way far too often, producing 20 turnover-worthy plays on the year. This season, however, has been a different story. 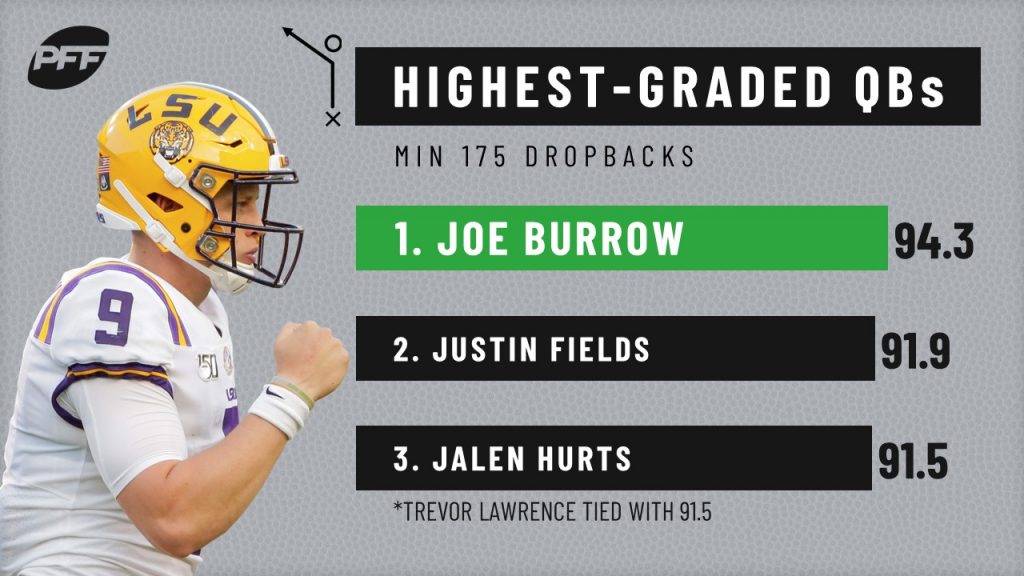 Burrow is PFF’s highest-graded quarterback this season, with a 94.3 overall grade. He's produced the most big-time throws (32) while limiting mistakes with just nine turnover-worthy plays. So, what changed for Burrow besides the scheme he’s playing in?

The most significant improvement of Burrow’s lies within his decision-making and patience in the pocket. Last year, Burrow performed below expectations when throwing to his first read. On those passes, he ranked 42nd among qualifying FBS quarterbacks in PFF passing grade, and he had the sixth-most turnover-worthy plays, with 19. There were several instances of him staring down his receiver right after the snap and trying to force a throw that wasn’t there.

But in 2019, it took a turn for the better. So far, he's earned a 93.2 passing grade throwing to his first read— he ranks second in the nation behind Fields at 93.3—and he has limited the mistakes to just six turnover-worthy plays.

We saw this a lot in 2018. Below, Burrow stares down his first read and lets go of an ill-advised pass.

But now, we've become accustomed to seeing this. In the play below, Burrow abandons the first read and moves onto his next read, and the throw results in six points.

Burrow has been patient with the play in 2019 — he knows when to abandon his first read when it’s not there. When throwing to his next read, Burrow is PFF’s highest-graded quarterback; he owns the highest passer rating (142.5), averages the most yards per attempt (11.0) and has an accurate-pass rate that’s 14% higher than the next closest quarterback.

Along with that, you can see Burrow’s poise on long-developing plays in his time-to-throw splits. When his average time to throw eclipses 3.1 seconds, Burrow is far and away the highest-graded quarterback (93.8), and that’d be the second-highest in the PFF College era behind only Baker Mayfield in 2016. Along with his near-record-breaking grade, his 14.2 yards per attempt on those plays is a yard more than any other quarterback in 2019.

Right now, one of the more sought-after traits for a quarterback is the ability to create outside of the structure. Burrow is one of few collegiate quarterbacks to pass that with flying colors. When Burrow has been forced outside of the pocket (non-designed rollouts and scrambles), he is, once again, the nation's highest-graded quarterback and has an accurate-pass rate 13% higher than second place.

If all that advanced data (that is found nowhere else in the world) didn’t convince you that Burrow is the best college quarterback in 2019 then maybe this will put it into perspective: Not only is he the highest-graded quarterback under pressure, but his grade under pressure is better than the clean-pocket grade of 84 FBS quarterbacks. Calling it insane is an understatement. He has thrown just one interception under pressure while throwing 15 touchdowns. Whether he is in a clean pocket or under duress, Burrow can quite literally do it all.

Joe Burrow's been worth almost half a win more than any other player in college football this year.

And to say he is getting bailed out by open receivers is just flat out incorrect, as well. His supporting cast and system have been great—there’s no argument there—but his numbers when throwing to a tight window only validates his stunning play this season, as Burrow is PFF’s highest-graded quarterback on those throws. He has 20 touchdowns (seven more than anyone else) and a passer rating of 116.1 (second is at 95.9). His adjusted completion percentage leads the country and his accurate-pass rate is 8% higher than second place.

LSU struck gold with Joe Brady and found a planet full of diamonds with Joe Burrow. Numerous individuals deserve their fair share of praise, but Burrow deserves it most. At the level he is playing at, be prepared to hear head coach Ed Orgeron yell out “Geaux Tigas” while hoisting the College Football National Championship trophy down in New Orleans on January 13, 2020.