With a dominant win over North Carolina that basically wraps up an appearance in the 2020 ACC Title Game, it looks as though even a loss in a rematch to Clemson would keep Notre Dame in a College Football Playoff spot.

North Carolina had been on fire on offense over the last few games, and there were more than a few people who expected the Tar Heels to win this Week 13 game in a shootout. Instead, after a quick 14 points, Notre Dame’s defense settled down and exposed North Carolina for the rest of the game.

North Carolina scored a touchdown on each of their first two possessions and looked like the offensive juggernaut they had started to become in the second half of this year. Then Notre Dame’s defense showed up. Led by defensive coordinator Clark Lea, the Irish, after allowing 125 yards on those opening two drives, allowed only 148 for the rest of the game. This was a dominant performance that started up front with their defensive line and was aided by some funky coverage rotations that were game planned by Lea.

North Carolina utilizes the play-action and RPO more than most teams in the country. In their RPO game, the two players they want to hit the most are their isolated backside receiver or their field slotback.

To do this, they line up in one of two formations: 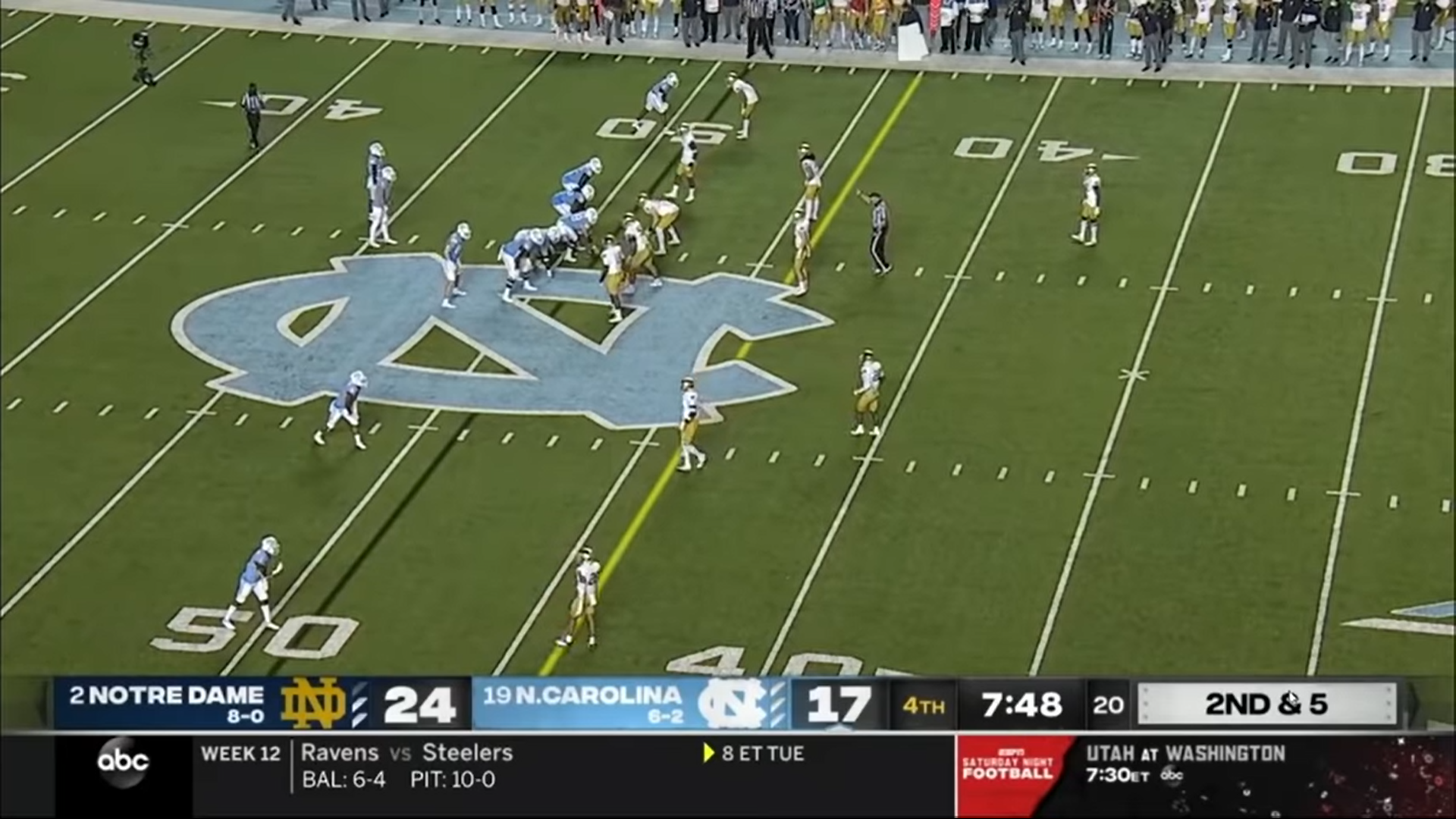 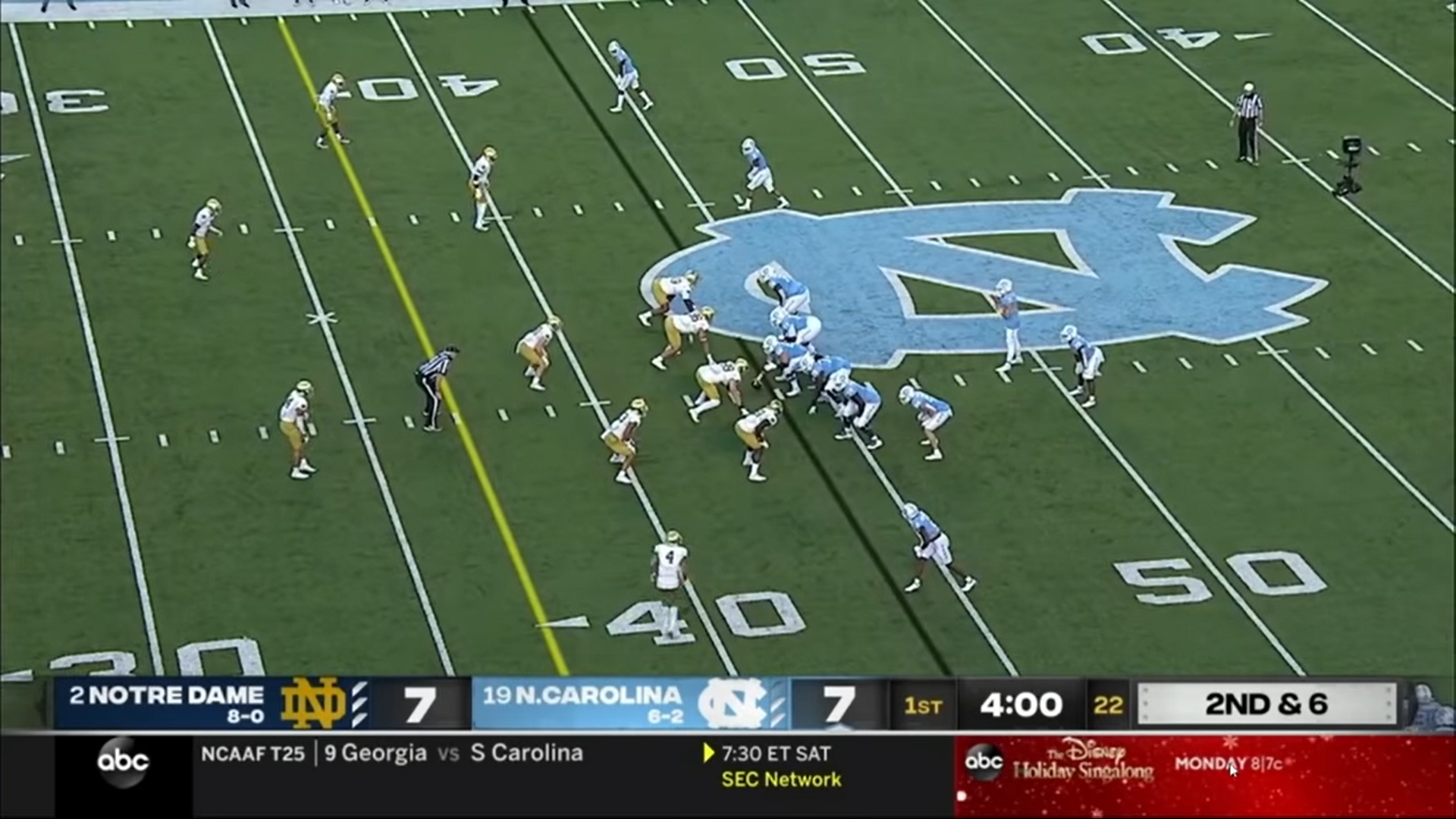 They are in one of those formations 75% of the time when they run those run-pass options (RPO). The tight end is not a receiving threat and is used to gain access to a more diverse running game. Whether the tight end lines up to the slot side or the single-receiver side, North Carolina can still treat each receiver the same way. To the single-receiver side, they will run five-step glance-posts or speed-outs; to the slot, they can give him slot fades, quick-outs or slants. So much of their offense is built around this core concept and the ensuing deep play-action attack off those looks.

Notre Dame had shown an interesting coverage rotation in both the Georgia Tech game and the Clemson game — one that was designed to thwart the offense's ability to throw to both the slot and the “iso” receiver.

They would show a two-high safety look, and then, after the snap, rotate the weak safety all the way across the formation to the strong side to the slot receiver. The field safety would get depth to his side of the field in a Cover 2 look, with the cornerback now able to sit low, knowing he has help over his head. On the backside, the corner would shoot for depth inside the iso receiver in an effort to become a pseudo-half-field safety to that side, and the defensive end would drop underneath that receiver.

Should the field slot receiver run his slant or glance route, the weak safety will be working inside of him to take that route away.

Kyle Hamilton was having a great game as the weak safety until he was ejected, but Houston Griffith came in to replace him and did a fine job, as well. If the slot receiver ran a quick out-breaking route, the corner was sitting there because of the Cover 2 rotation.

On the other side of the field, the dropping defensive end and the cornerback were essentially able to bracket the iso receiver. The cornerback could play inside shade and take away any in-breaking routes, while the defensive end dropped underneath the quick-out routes.

This allowed Notre Dame to continue to trigger their linebackers quickly against the run and overload the North Carolina running schemes. The linebackers triggered, the defensive line got off blocks and shut down the run game completely. North Carolina’s -0.378 expected points added (EPA) per play when they ran the ball against Notre Dame was by far their worst in the Phil Longo/ Sam Howell era.

The next part of North Carolina’s offense is their deep-shot play-action game — Howell will put the ball in the gut of the running back and make it look like a normal RPO play, but the offensive line will actually be pass blocking and they’ll hit a big play over the top. Coming into the game, Howell had made 15 big-time throws down the field on non-RPO, play-action attempts.

After hitting a nice post route off play action on the second drive of the game, North Carolina had no answers to Notre Dame’s pass rush and couldn’t get anything going. On 13 play-action attempts, North Carolina allowed 11 hurries. Luckily, Sam Howell was able to make some plays outside of the pocket but could not get any traction down the field.

That’s the aforementioned RPO defense from Notre Dame playing out against the play-action pass. They would like to get that crossing route open across the field from the slot, but Howell has no time, and the weak safety has come across the field to pick it up.

We can see the same defense again here, and Howell has to check the ball down. The NC signal-caller is looking for the wide receiver split out wide, but he’s getting double-covered because the field safety rotated to the half-field and the corner can sit on any route. Howell can only get to his receiver on the fake jet, but the weak safety has been sprinting to that route since the play began and pushes him out of bounds.

This was the worst game of the Mack Brown era for the North Carolina offense. Going into the game, UNC ranked eighth in the Power 5 since the start of last season in EPA per play on offense. They are both efficient and explosive. Notre Dame didn’t allow an inch.

Clark Lea put together a really nice gameplan, and with Ian Book continuing to play like a real quarterback, Notre Dame is going to be tough to beat, even for Clemson in a potential rematch.