• The Ohio State Buckeyes are the market's favorites to win the Big Ten, implying that they have over a 60% chance of winning the conference.

• On the back of Taulia Tagovailoa's skill at quarterback, the Maryland Terrapins are a great bet to go over their projected win total.

• The Nebraska Cornhuskers, even with expectations riding high, are a team to fade at their projected win total due to a poor offensive line and questions at quarterback.

The 2022 college football season kicks off on Aug. 27, as Week 0 is headlined by the Northwestern Wildcats and Nebraska Cornhuskers squaring off in Dublin, Ireland. Most of the value has been lost on preseason bets in college football, but that’s not to say there aren’t some winners available on the market.

Let’s look at the best last-minute preseason bets in the Big Ten.

Ohio State is looking for revenge after Michigan spoiled its opportunity to compete in 2021's Big Ten Championship game — a game that the Buckeyes won in each of the previous four seasons. The Buckeyes are in a good position to avenge their “down season” in 2022 according to the market, but PFF’s numbers don’t quite see the Big Ten in the same light.

Here is a look at the PFF projected win total for every Big Ten program compared to their win total posted on BetMGM Sportsbook. The further away from the black line, the more PFF disagrees with the posted win total. 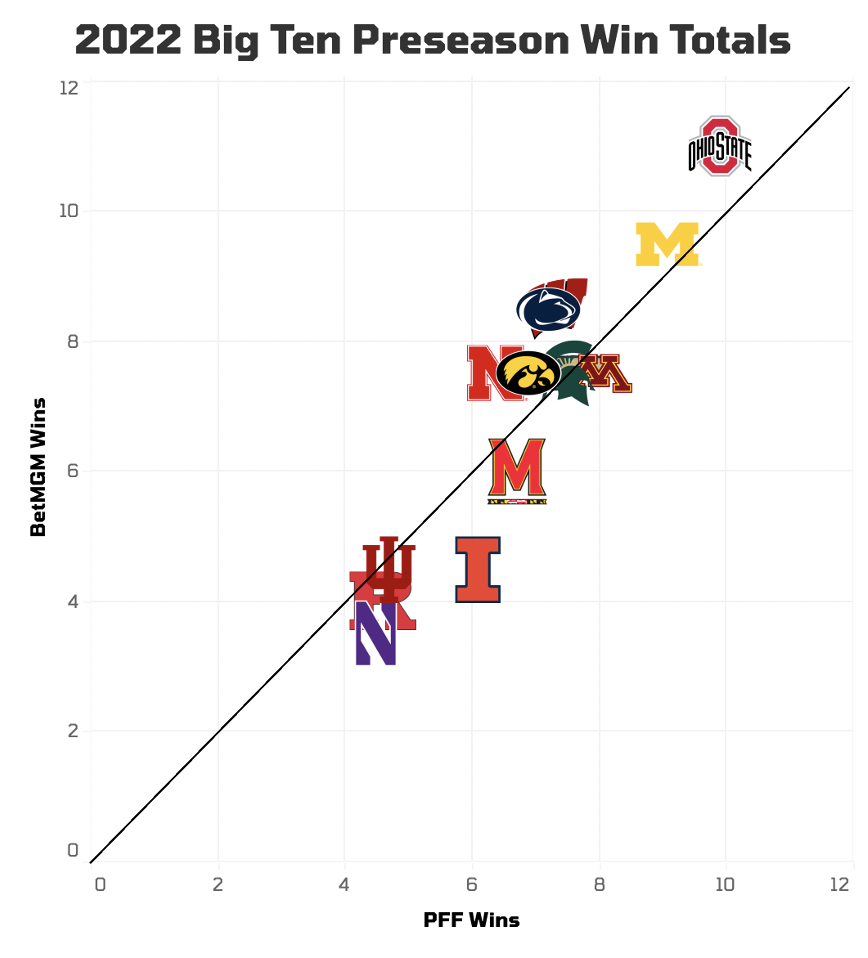 All of these win totals listed on BetMGM Sportsbook are juiced in either direction. Here is where which listed win total is leaning:

Their schedule may be tough, but the Terps have one of the most underrated passing offenses in the country.

Many tapped Nebraska as the best 3-9 team of all time in 2021 because each loss was only by single digits. However, that has led to unreasonably heightened expectations for the Cornhuskers in 2022, especially given their offense.

This may be too much juice to lay for some, but it’s a relatively safe bet to make for a Penn State team that has a suspect quarterback while facing a tough schedule.