• While four teams — Oklahoma, Texas, Oklahoma State and Baylor — have 6-to-1 odds or better for the Big 12 Championship, PFF slightly favors the Sooners to win the conference.

• Even with a new head coach, the TCU Horned Frogs‘ below-average defense makes them a team to fade at their projected 6.5-win total.

• Betting the under on the Texas Longhorns‘ projected 8.5-win total is wise based on untimely injuries to key contributors and their tough schedule.

The 2022 college football season kicks off this weekend with Week 0 being headlined by the Northwestern Wildcats and Nebraska Cornhuskers squaring off in Dublin, Ireland. Most of the value has been lost on preseason bets in college football, but that’s not to say there aren’t some winners out there.

Let’s look at the best last-minute preseason bets in the Big 12.

A few of the Big 12's premier teams underwent some major changes this last offseason, making the race for the conference title an interesting one. Oklahoma completely overhauled the coach and personnel sides following Lincoln Riley’s departure for USC. Texas landed one of the top transfers on the market in quarterback Quinn Ewers, who is a Lonestar state native and one of the highest-rated recruits of the century. Oklahoma State’s defense propelled the team to the Big 12 title game in 2021, but the mastermind behind that unit — Jim Knowles — left the program for the Ohio State defensive coordinator position.

Here is a look at the PFF projected win total for every Big 12 program compared to their win total posted on BetMGM Sportsbook. The further away from the black line, the more PFF disagrees with the posted win total. 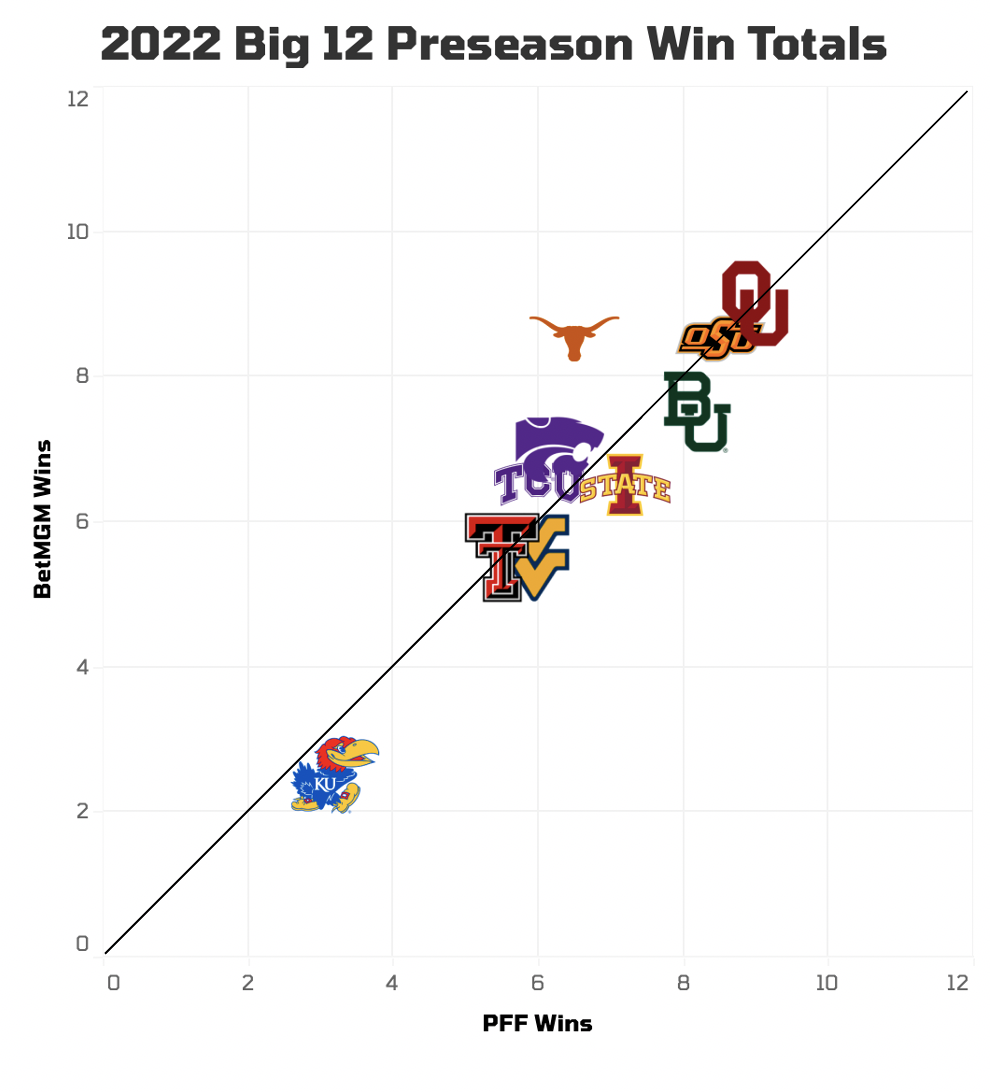 All of these win totals listed on BetMGM Sportsbook are juiced. Here is where which listed win total is leaning:

TCU is currently inside its worst three-year stretch of the century, and it's probably not going to get any better in Year 1 of the Sonny Dykes era.

One can still believe in Texas this year while also acknowledging the team's boom-or-bust nature. The Longhorns' ceiling is a playoff berth if everything goes according to plan, but they also have a “Guaranteed Rate Bowl” floor.