• The Clemson Tigers are the favorites to win the ACC, as the market implies that they have a 51% chance of winning the conference.

• Nevertheless, betting on Clemson finishing under its win total is wise due to D.J. Uiagalelei‘s potential to struggle in 2022.

• Even though they will likely be enduring a down year, the Duke Blue Devils are a good bet to go over their projected win total.

The 2022 college football season kicks off on Aug. 27, as Week 0 is headlined by the Northwestern Wildcats and Nebraska Cornhuskers squaring off in Dublin, Ireland. Most of the value has been lost on preseason bets in college football, but that’s not to say there aren’t some winners available on the market.

Let’s look at the best last-minute preseason bets in the ACC.

The ACC is one of college football's most intriguing conferences this fall with Clemson eying a bounce-back campaign while several other teams are in the running for the championship crown. The Tigers’ six-year ACC title game win streak was snapped last season, and while Dabo Swinney’s team is the favorite to take home the conference championship this year, they are far from a lock.

Here is a look at the PFF projected win total for every ACC program compared to their win total posted on BetMGM Sportsbook. The further away from the black line, the more PFF disagrees with the posted win total. 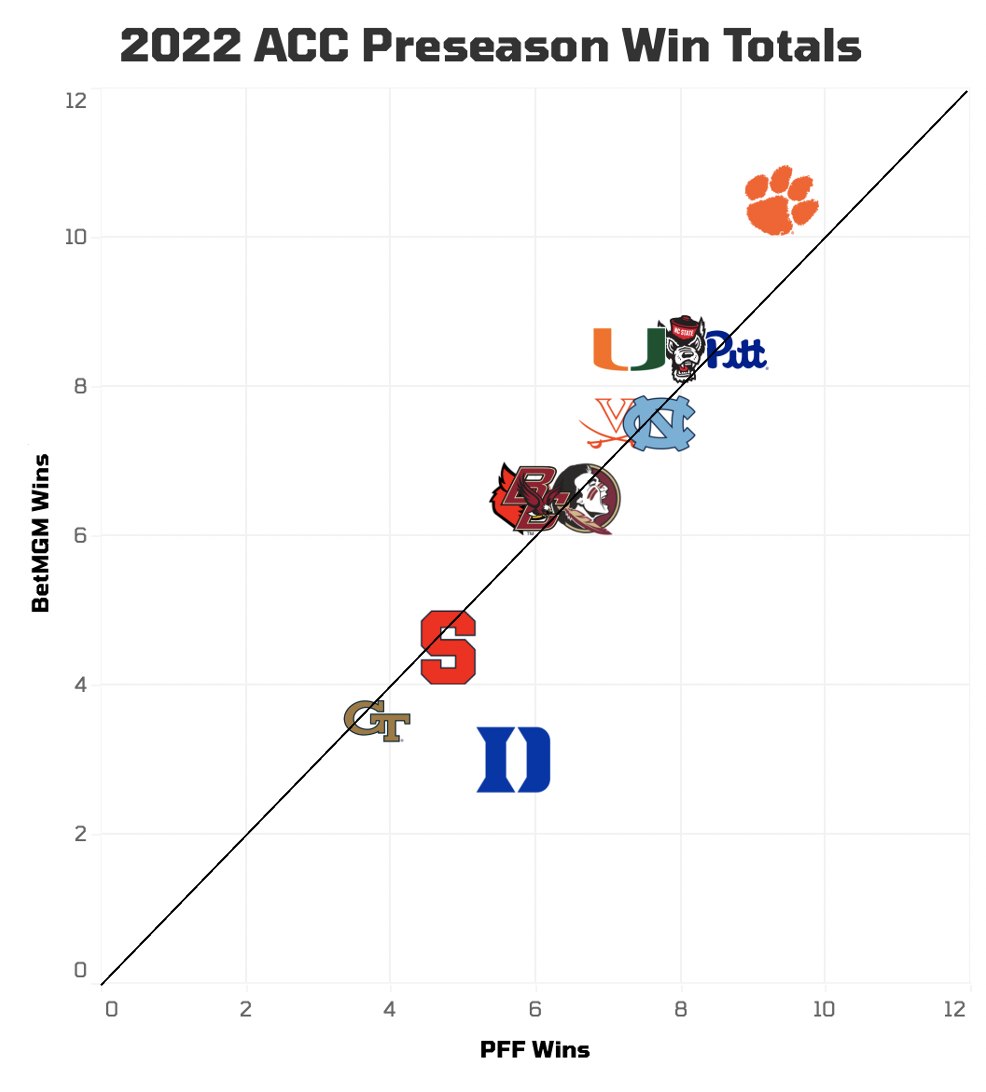 (Note: Wake Forest is off the board due to the recent news regarding quarterback Sam Hartman’s medical issue that will keep him out an extended period of time.)

All of these win totals listed on BetMGM Sportsbook are juiced in either direction. Here is where which listed win total is leaning:

Is Duke going to thrive in Year 1 of the Mike Elko era? No, but that doesn’t mean they won’t win more than a couple of games.

Clemson had national title aspirations entering 2021, which quickly dwindled away as starting quarterback D.J. Uiagalelei struggled to lead an efficient passing attack. Considering their lackluster offense is likely to remain in 2022, winning 11 or 12 games is too big of a hill to climb.