The All-Conference USA selections below are headlined by the first team with the second team listed below each position. 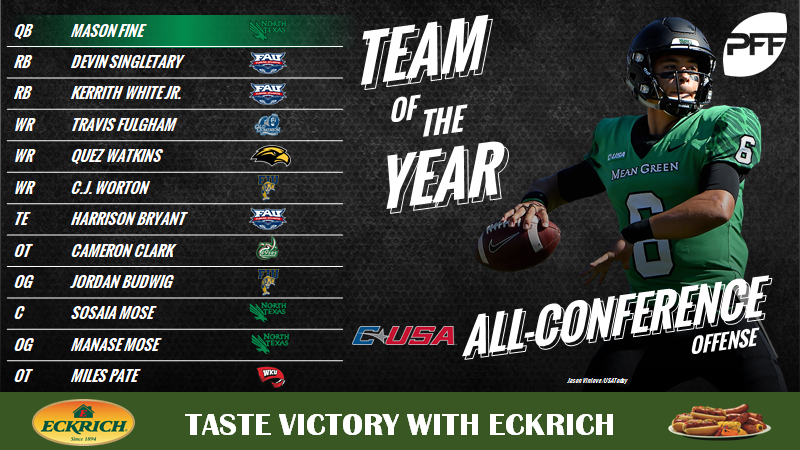 Fine was the conference's highest-graded quarterback as he averaged a very healthy 8.2 yards per attempt and kept an even more impressive and conference-best 79.9% adjusted completion percentage.

Singletary leads the nation (for the time being) with 94 missed tackles forced on his carries.

Singletary's counterpart was incredibly effective on his own carries, averaging 3.92 yards after contact per attempt.

Of Watkins' 889 yards this season, 541 of them came after the catch, a figure that led the conference.

Worton's 8.6 yards after the catch per reception was the second-highest among qualified conference receivers.

A Second-Team All-American, Bryant dominated for the Owls in 2018, hauling in 69.4% of his targeted passes for a conference-high 648 yards that saw 430 of them come after the catch.

Clark finished as the highest-graded offensive linemen in the Conference USA, regardless of position.

Pate finished just below Clark in overall grade and in run-blocking grade, garnering his spot here. 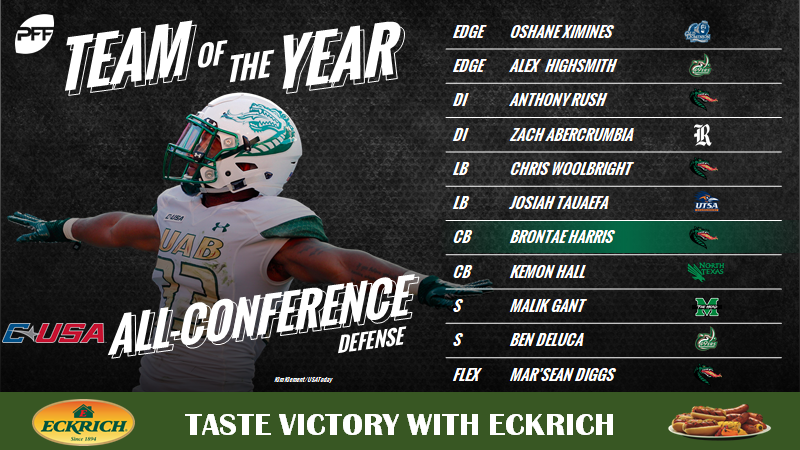 Sneaking into the first round of our latest Mock Draft, get ready to hear a lot about Ximines over the next few months as we approach the NFL draft.

Leading all edge defenders in total defensive stops with 46, Highsmith also forced a fumble and batted a pass at the line of scrimmage.

Rush racked up 14 QB pressures but was dominant across the board registering 25 defensive stops and 36 total tackles.

A sure tackler from the interior, Abercrumbia missed just one tackle on his 49 attempts in 2018.

Woolbright blitzed on 40 snaps in 2018, registering a pressure on 25.0% of those pass-rushing snaps including two sacks.

Tauaefa finished the season with 21 total QB pressures on just 68 pass-rushing snaps while he also finished second among all linebackers with 57 defensive stops.

No defensive back in the conference limited receivers better than Harris who allowed just 39.6% of his targeted passes to be caught and held opposing quarterbacks to a 40.6 passer rating when targeted.

Hall led the conference's cornerbacks with a combined 14 plays on the ball that included five interceptions to tie for the C-USA lead.

Gant was selected as the nation's best safety in the box as he dominated once again against the run for the Thundering Herd.

Deluca was a force for the 49ers this year, registering 16 defensive stops and making 84 total tackles while missing just five tackle attempts on the season.

Targeted 19 times in coverage, Diggs allowed just seven receptions and limited receivers in his primary coverage to just a 56.1 passer rating when targeted.

Cruz was perfect on extra points this season and knocked home 8-of-10 field goals from 40 or more yards away.

Fox averaged 40.3 net yards per punt, nearly a full yard more than the next closest as 44 of his 80 kicks were downed inside the 20-yard line to lead the conference.

Torrey led the conference by averaging 29.3 yards per kick return and had a long of 96 yards on his kick-return touchdown this season.

Alexander averaged an astounding 16.3 yards per punt return and made nearly as many fair catches (13) as he did returns (14) without muffing a single attempt.