The summer months have cooled off the SimBull NFL prices. Overall, the NFL market has lost 3.3% return on investment (ROI) since July 15, with 21 teams seeing a negative ROI during this time period.

The main reason is the slow news cycle that has set in for the NFL, but some of the market participants have also been cannibalized by the new college football offerings. The discounted shares are hard to bypass, which has caused some influential investors to pivot a majority of resources from the NFL to college football.

As training camps kick off, things should start to pick up at the NFL level due to new participants starting to speculate before the upcoming season. The lull in trading has allowed some value to creep into the market, especially when looking at the teams impacted the hardest by the long summer months. 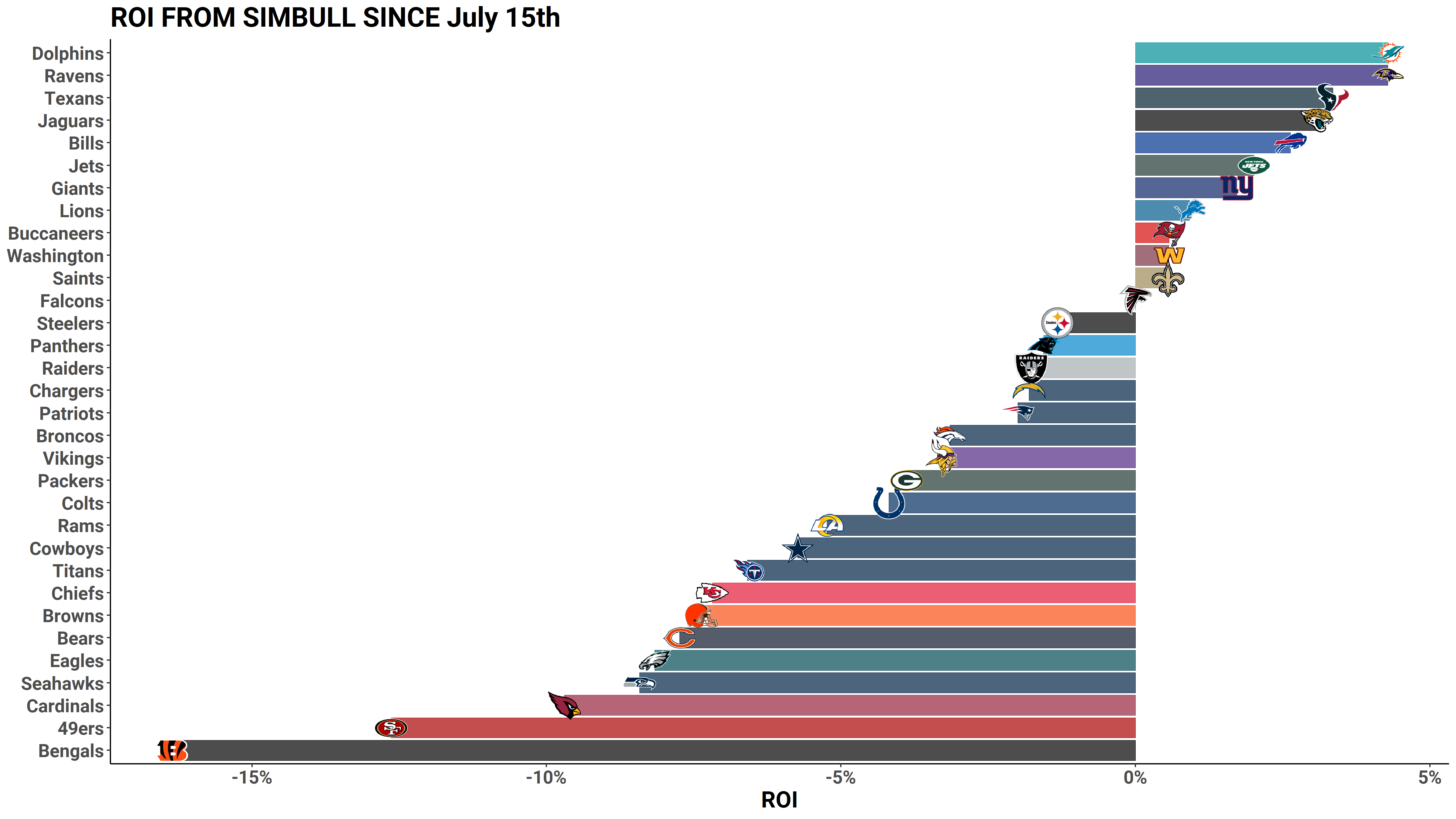 The SimBengals were clearly overvalued and need a sustained correction to be touchable again. The other two teams losing the most ROI require a deeper dive. We will look at each of them along with the rest of the NFC West today.

Arizona has lost the third-most ROI in the past month after falling by $4 and almost dropping below the $40.00 threshold. The Cardinals appear to be the forgotten team in the NFC West, as they have the longest odds to win the most difficult division in football. They are also the only NFC West team to currently sit outside the top 10 in market-implied power ratings. The Cardinals clearly have a difficult schedule, but another division team faltering could result in them contending for the division crown.

Based solely on the quarterback position, Arizona could surprise with Kyler Murray in Year 3 after he posted the 14th-best opponent-adjusted passing grade last season. Matthew Stafford has received all of the hype and love in his move to Los Angeles but finished only one place above Murray in that metric. There is clearly an argument to be made for Murray to be the second-best quarterback in the division if you include his rushing ability.

A receiving unit led by DeAndre Hopkins will always challenge for the best in the division, and Arizona’s opponent-adjusted receiving grade aligns with that sentiment. The team finished one spot behind Seattle in that metric last season, but it’s anyone's guess how the Seahawks' offense will look in 2021.

The clear reason to buy into the Cardinals' overall offense is their offensive line, which is one of the best pass-blocking units in the NFL. Their offensive line finished sixth in pass-blocking grade and allowed the second-lowest percentage of pressures in the NFL. Arizona has been downgraded solely on things outside of its control, which makes the team the most obvious buy at a discounted price in the NFC West.

The Matthew Stafford hype train has officially reached its tipping point. PFF’s Sam Monson has made it his personal mission to bring people back from the brink of insanity, but some appear to be too far gone.

The Rams are tied for the fourth-shortest odds of winning the Super Bowl. They now sit as the eighth-most expensive team on SimBull despite losing over 5% ROI in the past month.

The enticing parts to buy into Los Angeles are obvious: the best returning defense in football and offensive mastermind Sean McVay with a competent quarterback. The problem is that defense regresses, and the Rams are priced at their absolute ceiling in all markets. Starting running back Cam Akers was just lost for the year to a torn ACL, and the skill position players aren’t necessarily game-breaking talent.

McVay will need to be on point because the Rams have the most difficult five-game opening stretch of any team in the NFL. There could be a time to buy into them, but that is not now. Wait until Los Angeles disappoints in Seattle on a short Week 5 before buying low on the team.

The 49ers have dropped five spots after being priced as the fourth-highest team one month ago. There has been an overall correction on them in every market, as they are no longer listed as co-favorites to win the NFC West. Some pullback was inevitable after the 49ers left the 2020 season with the worst opponent-adjusted passing grade in the NFL. Obviously, quarterback Trey Lance was drafted to remedy that situation, but it isn’t clear if he will start right away or even be completely up to speed.

Missing on that high of a draft pick after giving up so much to move to the third pick could be devastating for the 49ers' situation. Given the long-term timeframe available on SimBull, it seems best to take a wait-and-see approach. If Lance looks the part of a franchise savior early in the season, then a buying frenzy should begin on the 49ers. Being at the forefront of this movement would be the best opportunity to make money on SimBull all season.

No team appears to have a wider range of outcomes in 2021 than the Seattle Seahawks. They have the 10th-shortest odds to win the Super Bowl but are the third-most likely team to win the NFC West.

Quarterback Russell Wilson played at an MVP level through the first eight games of last season before everything started to crumble around him. The shaky foundation has led many to question how long Wilson can keep the Seahawks relevant. And Wilson isn’t without his own warts, as the third-longest time to throw in the NFL led to the third most sacks taken last season. Although the raw numbers are tough to look at, he managed to escape actual disaster by recording the fifth-best mark of expected points added (EPA) per pressured play.

The Seahawks' wide range of outcomes is directly reflective of their quarterback play. It’s easy to see any number of scenarios play out with Seattle. The ability to buy when no one else wants to appears to be the best mindset for playing the SimSeahawks.