SimBull continues to gain market share as one of the most exciting and innovative ways to speculate on football. There has been a significant uptick in market participants as SimBull moves toward a more robust and efficient market.

This has played out in the number of total trades over time, as early June saw by far the highest number of trades in SimBull's history. The market has taken a brief pause but still has encouraging results — including weekly increases in activity after a slight downward trend following the 2021 NFL Draft.

SimBull is positioning itself for an even bigger share of the speculative market after announcing that it will be offering College Football SimBull shares. One hundred shares of 65 different college football teams will be dropped on Thursday, July 1. The Power 5 conferences will all be fully represented.

One of the easiest ways to make money on the SimBull market is by getting in on the ground floor of the new offering. This is apparent in how the NFL market was initially released with a price range for all 32 teams between $14.36 and $20.62. The mean offered price was $17.49, and all teams are now seeing over a 100% return on investment except for the lowly Houston Texans. In fact, if you bought a single share of every NFL team at the initial offering, you would have a return on investment of 165.96% and have a current value of $1,488.52 on a $559.68 initial buy-in. 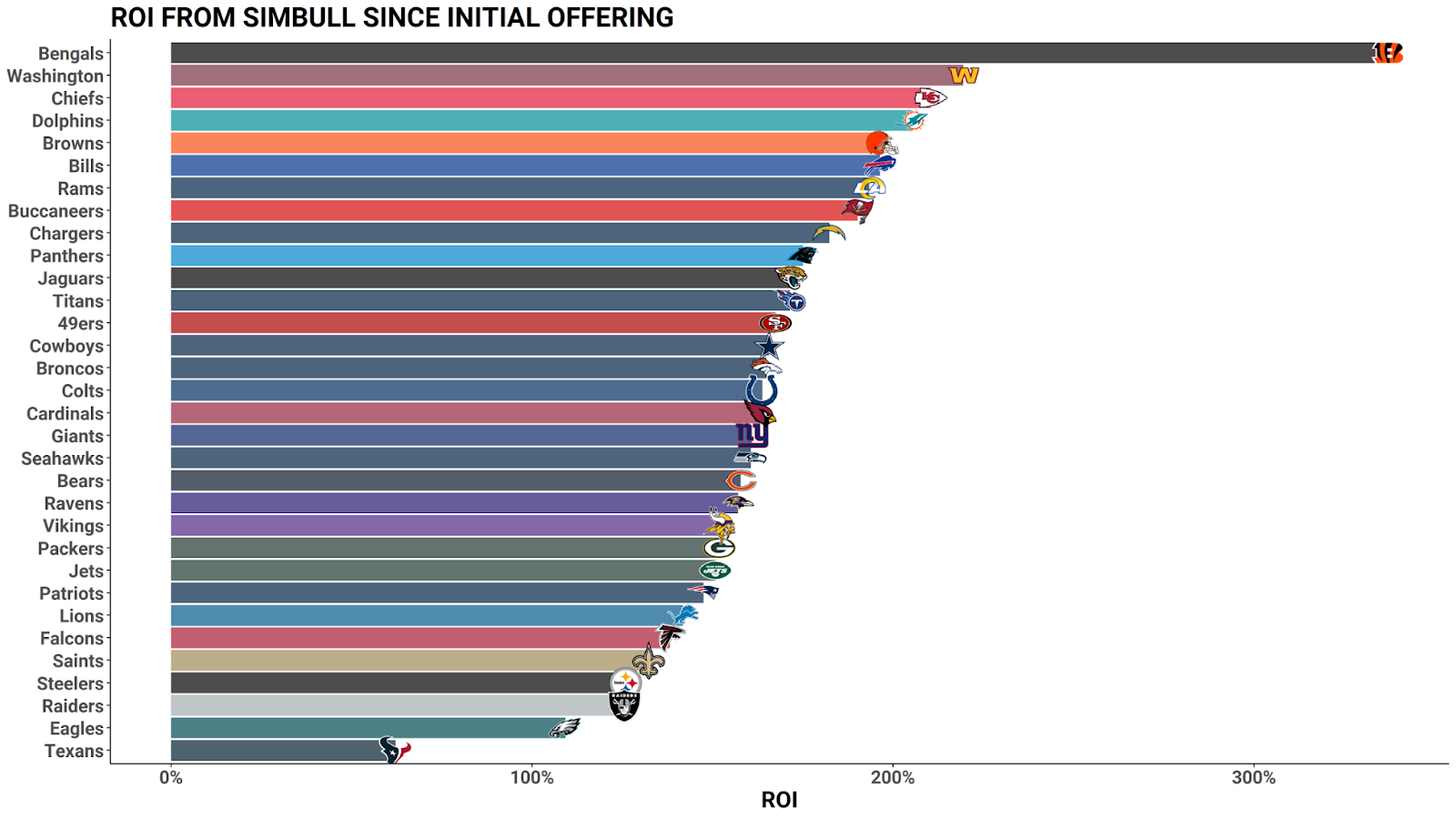 Getting in on the ground floor of the college football market will be the easiest way to turn an immediate profit on SimBull. PFF will have more analysis on this college market soon, but for now, let’s turn our focus to some AFC divisions and assess whether any teams should be viewed as a potential buy in the NFL market.

Baltimore looks like the most mispriced team that is expected to make the playoffs in 2021. The Ravens have the fifth-highest SimBull price but offer the third-most value based on PFF ELO ratings in relation to that price. The betting market is even higher on the Ravens, which makes SimBull the perfect avenue to buy into them.

Their shortcomings in the 2020 playoffs don’t hamper their outlook like other speculative markets. It only results in public perception being lower on them than it should be. This plays out in the SimBull market, with the Ravens having the lowest percentage of total trades for any team in the NFL. Baltimore looks to be the perfect target for traders looking to go slightly contrarian with a team expected to win its division, especially given the Ravens' enticing early-season schedule.

The Browns sit one spot behind Baltimore in SimBull price rankings, as seemingly everyone expects them to leapfrog the Ravens in 2021. The expectation for Cleveland sits squarely on the production of quarterback Baker Mayfield, who recorded the 10th-best passing grade in 2020. Doubters will look to his 21st-ranked adjusted completion percentage and surmise that he is a product of the Kevin Stefanski wizardry.

Regardless, if Mayfield hits his ceiling, the pieces are in place around him for the Browns to make noise in the AFC. Unfortunately, their SimBull price already reflects some of that ceiling outcome with little pause for the downside risk. If you are looking to play the Browns, then a wager on their division future or win total looks like the most appropriate path.

Two things continue to persist in the SimBull market: High-quality teams remain high-priced, and up-and-coming teams with quality quarterback play tend to be overpriced. Yet, Pittsburgh offers neither and looks headed for a rebuild. The Steelers are the 10th-lowest-priced team but still haven’t fully bottomed out if they end up in the most likely on-field outcome. They have enough young skill position talent that a drop into the cheapest five teams could present a buying opportunity, but for now, a wait-and-see approach is best.

The Cincinnati Bengals are really the Dogecoin of the SimBull NFL market. After being tied for the lowest initial price offering, they have jumped up to the second-highest-priced team on the TradeBlock market. There doesn’t seem to be a sound reason why. Because of this uncertainty, we have seen their trading volume completely dry up in the past month.

They are still the second-most traded team since March 1 but haven’t had a single trade completed in four weeks. If you are hoping to buy into the Bengals, then finding an appropriate bet in the futures market is a much better proposition than taking a shot on them at their sky-high SimBull price.

Buying at the top isn’t as scary when you are basically assured of quarterback Patrick Mahomes for the next decade. The uncertainties are regarding the time frame and the appropriate time to buy and sell the Chiefs. Given that they have the third-highest return on investment of any team, a small correction always looks like a buying opportunity. With the Chiefs facing a tough opening stretch to start the 2021 season, patience could be the key to investing in them.

The Chargers have two competing schools of thought, which pushes them toward the mean for most rating systems. PFF ELO slots them into 25th, which is 10 spots below the market-implied power ranking derived from 2021 game spreads and totals. PFF has generally been slower to warm up to the assumed elite status of Justin Herbert, even after his stellar rookie season.PFF’s opponent-adjusted grades had him as the 15th-best quarterback, but expecting him to make another significant leap in Year 2 seems like a stretch. This is exactly what is needed for the Chargers to come close to justifying their price as the 11th-most expensive team in the SimBull market. However, Los Angeles looks like a spot to avoid if looking for value.

The Raiders have gained over 30% return on investment after PFF's first article recommended them as a strong buy in the SimBull market. Las Vegas still appears mispriced as the second-cheapest team in the market and offers the second-best value based on PFF ELO. With their market-implied power rating being almost 10 places better, the Raiders are still the perfect under-the-radar team to buy into.

We have seen the Broncos' futures odds rocket up after speculation about them securing a franchise-saving quarterback. This has made them impossible to buy into at their current place in the betting market, with them being the fifth-most likely team to win the AFC. Denver's surrounding talent helps form one of the best rosters in the NFL, but there’s no way the Broncos live up to that type of pricing with Drew Lock or Teddy Bridgewater at quarterback.

This makes their SimBull price as the 21st-most expensive team feel more reasonable in comparison. Without a Hail Mary quarterback acquisition, they simply don't offer enough of a ceiling outcome to justify their current price.