The Lombardi Trophy is still the toast of Tampa, but books have wasted no time posting 2021 future markets. Based on the 2020 finish, some of the best value can be had in the immediate opening of next season’s futures.

Tampa Bay’s Super Bowl run was built through free agency and the draft, as they opened at +6500 odds to win the Super Bowl — before dropping to +1000 heading into Week 1. Outside of a Deshaun Watson trade, we shouldn’t see a movement as drastic for any team heading into 2021.

There are a couple mispriced teams based on current makeup, but swinging the bat on a few long shots who might surprisingly update their quarterback room adds some intrigue. Right now, the value appears to be favoring long odds, as most of the shorter prices shouldn’t see improvement throughout the offseason. Let’s take a look at the best long-shot candidates who will only see their prices go lower as we head toward the 2021 season.

Things change quickly on the never-ending pursuit for positive expected value bets. Teams quickly shift from being overvalued to undervalued, as opinions tend to overcorrect in the offseason.

This feels blasphemous to write, but the Vikings do have better than 16.7% break-even probability to win the NFC North. Green Bay is currently priced as the second-most likely team to win a division, needing to repeat 75% of the time to break-even. Even if that is a reasonable assumption for Green Bay’s outlook, there are numerous reasons why the Vikings should be the clear No. 2.

Detroit’s full turn into tough-guy town should produce some ugly games but few wins. The litany of changes sets the expectation that they are one of the worst teams in 2021, which turns the North into a three-team race.

Between Chicago and Minnesota, the Vikings have the clear advantage at the quarterback position — outside of a Watson trade. Kirk Cousins’ ability will always be questioned, but he consistently delivers more accurate passes than the NFL average. As our QB annual highlights, Cousins was well above average in terms of our accuracy metrics and really only struggled on tight-window throws in the 10-19 yard range.

The Vikings have the clear advantage in terms of skill position players, as their pass-catching unit and running backs generated the second-most WAR of any skill position group last season. The Bears were 12th in this category, but the loss of Allen Robinson would make this a drastic advantage for the Vikings.

The main reason the Vikings seem to continue with Mike Zimmer is his ability to piece together a defense much better than the sum of its parts. The return of Danielle Hunter and continued growth from young defensive backs could easily blossom into a strength for the Vikings in 2021. It appears to finally be a make-or-break year for Zimmer, with things turning into a complete rebuild or entry into the playoffs. Predicting a bounce back for Zimmer’s defense, along with above-average quarterback play from Cousins, should keep the Vikings relevant in the North.

Minnesota appears to be far more likely to overtake a Packers team than the Bears currently are. Which makes the final question become what to make of Aaron Rodgers‘ revenge tour continuing in 2021?

The South has some of the most mispriced lines of any division. The Buccaneers, fresh off of their Super Bowl win, only have a 53.25% implied probability of winning the division. This is too low if you have the correct assumption of the No. 2 team.

For all intents and purposes, Drew Brees has retired. The Saints future’s market should be evaluated with that understanding, which makes their 33.3% break-even percentage one of the worst bets this offseason. Their eventual drop adds value to the rest of the participants in this division.

Jameis Winston couldn’t win the division with a more talented Buccaneers squad that just won the Super Bowl. Say what you want about Taysom Hill, but the Saints aren’t winning the division with him as the full-time quarterback, either.

Carolina has their own questions at quarterback and despite playmakers at the skill positions still generated the lowest WAR of any unit in this division. They get another year of Joe Brady but still appear to be at least one more year away.

Which brings us to the Falcons at a 8.3% break-even probability. Most were perplexed by a few of the head coaches hired this offseason, but if your preference is offense then Arthur Smith looks like the best one hired. Smith has had success as an offensive play-caller, finishing well above average in our EPA-based metric. 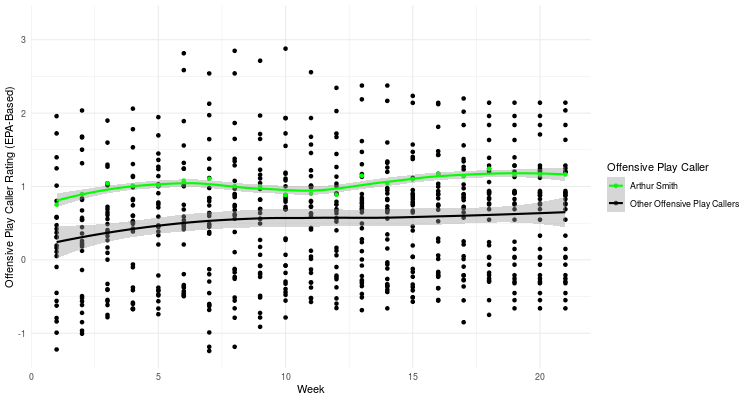 It’s no stretch of the imagination to assume that Smith has immediate success with Matt Ryan, Julio Jones and Calvin Ridley. The Falcons are a late-round running back away from one of the best offenses from an EPA perspective in 2021. If that plays out, there is significant value on them to surprise in the NFC South at +1100 odds.

Finding value in situations where the quarterback can easily exceed current expectations has been a continued theme through these division picks. This is once again the mindset when trying to identify a winner in what turned out to be the best division in football last season.

The Ravens turned things around in the second half of the season, with Lamar Jackson securing his first playoff victory. This didn’t fully silence the doubters, as the Ravens continue to struggle when forced to play from behind.

Their defense has a similar issue, as their over-reliance on the blitz to generate pressure allows them to beat up on inferior opponents but opens up opportunities for the best offenses in the NFL, and they take advantage. With almost a 50% break-even probability, better pricing can once again be found at the bottom of this division.

Pittsburgh has the Big Ben dilemma and seems closer to a rebuild than a division run. They have the same defensive concerns as the Ravens, which makes them unplayable at their current price.

Cleveland could be a viable wager, but at a 33% implied probability it does feel like they are being bought near the top.

That leaves the long-shot Bengals with their sophomore quarterback recovering from ACL surgery. Joe Burrow has been adamant that he plans to start the season on time and could even take some reps in training camp. That suggestion alone offers some value on the Bengals after what Burrow and this offense flashed for stretches last season.

Add in the Bengals' ability to improve dramatically at the top of this year's draft, and +2500 looks like a decent flyer that is only going to improve as the offseason progresses.

The Deshaun Watson saga appears headed for a split, which will send shock waves through the futures market. As PFF's Seth Galina explained, Watson had the best quarterback season of 2020.

Being able to identify the correct landing spot for Watson will offer significant value on that team’s futures price. The obvious choices of Miami and San Francisco appear to have some expectation of Watson landing there baked into the current number.

If we really want a shot at an outsized payday, we are going to have to look for a less obvious landing spot for Watson. Denver was one of two teams mentioned by insiders as being on Watson’s short list, but they wouldn’t be near the favorites if a betting market was currently priced on the outcome.

Denver’s new GM, George Paton, could be in line to pull a splashy trade as his signature move almost immediately. At a time when the Chiefs look to be at their most vulnerable, snapping up the next-best young quarterback could be the only chance the Broncos have of being competitive in the AFC West over the next decade.

The Broncos were a league-average team in WAR generated outside the quarterback position. A trade would cut into the Broncos draft capital, but they offer enough cap space to provide flexibility to improve the roster around Watson. At +6600, the Broncos Super Bowl odds would rise dramatically if Watson lands in Denver. It isn’t a likely scenario, but the value heading into the season would be unmatched given the current market.