Four of the five Power Five conferences are in play this weekend, making the return of college football all but complete. The Big Ten kicks off with a showcase game highlighted on College Gameday, and we have 48 games on tap, with 19 of our top-25 teams in action. Minnesota sits just outside our top 25 right now, so no matchups between teams in our top 25 exist, but that is more than made up for with the quantity we are being given.

Week 8 has less uncertainty than the peak we saw in Week 6 or 7. We have a few quality matchups, but bigger spreads make up the majority of games. Week 8 sits right below the third quartile in entropy among all college football slates that have involved at least eight games over the past six seasons. As we've seen in the past, things tend to drop off in Week 8, as team rankings become more defined and we see wider spreads and moneyline probabilities.

Our initial lines picked up some closing line value last week, but losing one game due to COVID caused our written plays to go 1-1. Derivative bets also broke even at 2-2, moving us to 9-3 on the season. These plays are discussed heavily on the Saturday morning edition of the PFF Daily Betting Podcast.

We now sit at 53-53-1 on written plays over the past two college football seasons. PFF's predictive models (NCAA Greenline) had another great week at +9 units against the closing line, as it continues to identify significant value on each college football slate. Let’s take a close look at some of my favorite bets to make from a Greenline perspective for this Week 8 slate of games.

Friday night offers a worthwhile betting opportunity on an enticing Group of Five matchup. This spread opened at -1.5 for the UAB Blazers but has dropped down to -1, with a move down to pick ‘em occurring at some books. These two teams are back-to-back in our Elo rankings, so if home-field advantage means nothing, this spread seems accurately priced.

UAB has the third-best defensive unit in the country, according to our opponent-adjusted defensive rankings. They also have the better quarterback in Tyler Johnston III, who was one of the best deep-ball passers in college football last year, though he's seen his average depth of target (aDot) shrink to 5.1 from 13.6 in 2019. He is a much better quarterback than what he has shown through two games, though, and their defense has been sturdy enough to start the season, giving UAB the edge in every important category on Friday night.

I have been leading the Brock Purdy hype train for far too long to back off him on this game. The market has moved in the Cyclones' direction, too,  opening at -4 before dropping a half-point to -3.5.

There are reports that Spencer Sanders and Shane Illingworth will see some run at quarterback for the Cowboys. Illingworth has been the better passing quarterback this season, but Sanders has more experience and rapport with the Cowboys‘ skill position players.

Purdy still looks like the best quarterback in this matchup. He flashed a bit of a turnaround against Texas Tech with an 82.8 passing grade, slinging it all over the field on 44 dropbacks. The concerning thing is it was done on a relatively low aDot — so there were no big-time throws to speak of — but there were still a lot of positively graded plays.

The Cyclones perform best when Purdy plays within himself, trusting his receivers to make plays after the catch. After their humbling opening-week loss to the Ragin' Cajuns, they have strung together three quality performances and are the third-best team in the Big 12, according to our Elo Rankings. I am siding with the big-money bettors, with the Cyclones offering value before this spread moves down to +3.

College Gameday comes to Minnesota to kick off the Big Ten schedule. Minnesota has the majority of their offense from last year back in action, and they are led by QB Tanner Morgan and WR Rashad Bateman, one of the best QB-WR connections in the nation. This number has held to the opening price, given the difficulty in handicapping a matchup between two teams that have yet to play and are now stepping into a season-defining game.

Although Jim Harbaugh doesn’t want to make it official, it sounds as if Joe Milton will be the starting quarterback for the Wolverines. Home-field advantage doesn’t matter much, but this game feels closer than a 4.5-to-5.5 spread on a neutral field.

The Gophers have the better offense, according to our opponent-adjusted grades. They also have the far superior quarterback and one of the best receivers in the country at home, and they are still getting 3 points. Spread key numbers aren’t as valuable at the college level, so I am inclined to take the Gophers on the moneyline at +135 since we aren’t gaining much with 1 and 2 and pushing 3.

This is a marquee matchup in the American between our third-ranked Bearcats and our No. 1-ranked Mustangs. Quarterback Shane Buechele gives the Mustangs an edge in PFF passing grade to start the season, with SMU averaging 0.4 expected points added (EPA) per pass attempt so far.

There is an element of uncertainty surrounding the Bearcats, with issues related to COVID influencing their game status last week. It is tough to gauge how teams respond, but inadequate practice times or missed practices altogether have more of an impact at the college level than it does at the NFL level.

Given the relative chaos that the Bearcats have been going through, this seems like a prime spot to fade them with a better team getting less than a field-goal spread. The market has completely flipped since the opening spread, but anything before -3 looks like value on SMU.

Mac Jones is playing at what is quite possibly an unsustainable level right now,  but he has been amazing — the Crimson Tide has generated more EPA per pass play than any other Power Five school, and Jones has the highest accuracy percentage in the FBS while still hitting a 10-plus-yard aDot. To say that Alabama has the edge at quarterback — and in the passing game in general — in this matchup would be an understatement. 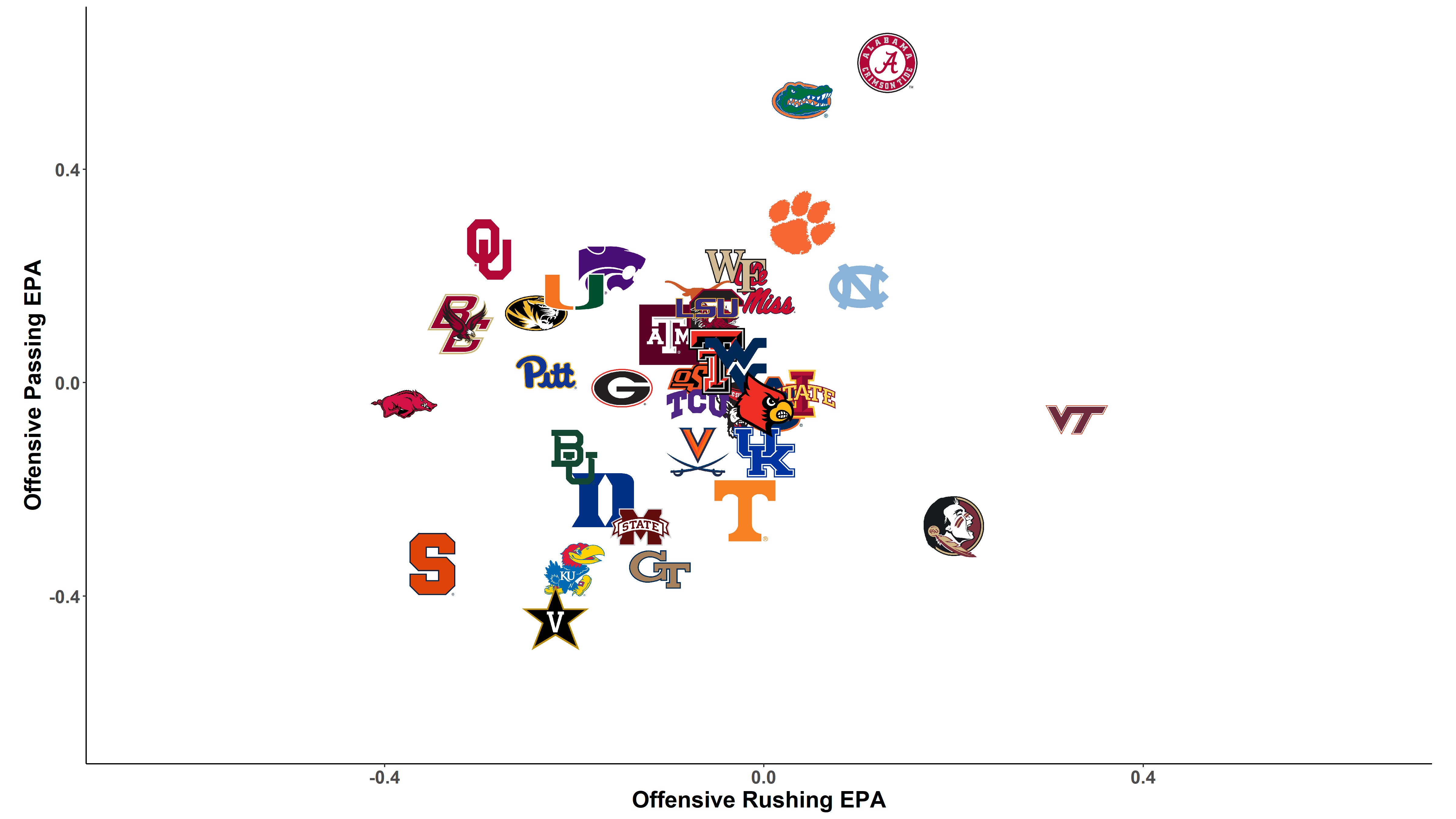 Jarrett Guarantano is coming off one of the lowest-graded games of the season after throwing two pick-sixes last week. He now has a sub-50.0 PFF passing grade for the season and more turnover-worthy plays than big-time throws.

Questions are starting to creep in about Guarantano's status for this Week 8 clash, as a switch to J.T. Shrout is entirely possible, though Shrout honestly didn’t look any better than Guarantano did last week. Ole Miss was able to move the ball on Alabama, but our opponent-adjusted defensive rankings have them at No. 2 in the SEC.

This looks like a classic spot where the Tide roll. I have been high on them all year, and I think this is where they finally cover for us.