Island games are the highlight of any NFL week for betting enthusiasts. And as the industry continues to grow, some of the most discussed moments belong to these single-game opportunities. Nowhere is that showcased better than during the NFL playoffs.

PFF will be bringing you all of the best betting opportunities for every single playoff game from our predictive betting models and player prop tools.

This article's betting record took a step back in Week 18, as the overall record moved to 121-173, and we pushed back below breakeven on the season, sitting at -0.82 units through 18 weeks.

Let’s dive into the best value bets for Saturday wild-card contests between the Las Vegas Raiders and Cincinnati Bengals before the nightcap featuring the New England Patriots at Buffalo Bills.

One of the easiest transitions into sports betting is through player props, as fantasy applications are helpful for evaluating betting opportunities.

The last two weeks highlight how well bookmakers are at setting efficient lines toward the end of the season. The action was almost perfectly balanced over the last two weeks of the regular season, meaning picking your spots correctly is the only real way to turn a profit.

Week 17 was the fourth week where over bets lost more units. As we head toward the playoffs, roles and usage are at their stickiest points and pregame injuries don’t influence the markets as much. The path of least resistance is to sweat out some unders despite how uncomfortable that can feel at times.

Receiving yardage and passing yardage unders continue to be the best category to bet. Target share is somewhat consistent, but it is more difficult to predict than rushing attempt share. Receptions are also viable spots to take unders for this same reason, as are passing touchdowns. The Poisson distribution of both outcomes means the price is a significant factor in deciding if one of those prop categories is worthwhile to bet from either side. If looking to target overs, rushing attempts as well as combining rushing and receiving yardage numbers continue to be the best opportunities in addition to targeting some quarterbacks to throw for at least one interception. 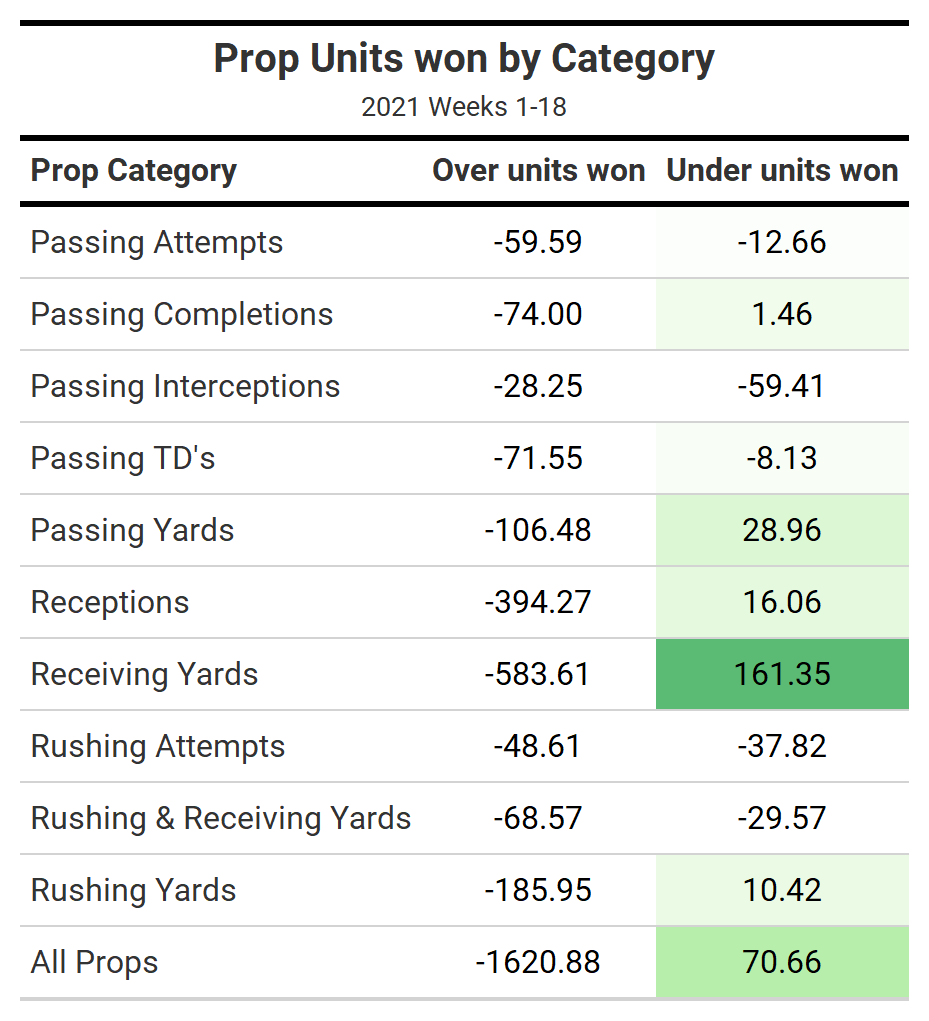 A better way to quantify an edge is by utilizing PFF's best bets tool. The ability to adjust both number and price means you are always certain of the expected value for each prop bet.

Routinely, single-game QB rushing yard totals are of the best opportunities to find an edge against the prop bet market, and this game is no different, as PFF’s player props tool sees positive expected value in Burrow covering his 9.5 number.

Against pressure from the edge, Burrow prefers to scramble as opposed to checking down or throwing the ball away – watch the tape against the Kansas City Chiefs and the San Francisco 49ers. And while the Bengals give their tackles help against top edge rushers with chips, double teams and max protection while staying in 11 personnel, Raiders star Maxx Crosby (91.8 pass-rush grade) should still win his matchup enough times on Saturday to force Burrow to escape and pick up at least 10 yards.

The one area of concern is how little the Raiders actually have to blitz in order to apply pressure. They blitz at, by far, the lowest rate in the NFL and will need as many defenders in coverage as possible against the Bengals trio of wide receivers. This opens up the middle of Las Vegas' defense for Burrow to escape pressure on Saturday.

In addition to rushing for double-digit yards in each of the last three weeks, PFF’s player props tool gives Burrow a 55.5% chance to cover this prop.

The odds-on favorite for rookie of the year, Chase has had a historic rookie season for the Bengals. Among rookie receivers with at least 100 snaps played since 2011, Chase ranks fifth in receiving grade, first in yards, seventh in receptions and first in touchdowns.

Chase has the advantage against the Raiders cornerbacks, as PFF’s WR/CB matchup chart gives Chase the eighth-best matchup advantage score of any receiver playing on wild-card weekend. Primarily expected to line up across from Casey Hayward Jr. (75.0 coverage grade) and Brandon Facyson (45.7), Chase should be able to break free more than a few times on Saturday to connect with his old college quarterback.

According to PFF’s player props tool, Chase has a 56.3% chance to record at least 72 receiving yards, which represents a positive expected value for bettors at -115 juice.

Neither the spread nor total have moved much in the week since the Raiders beat the Los Angeles Chargers in arguably the game of the season last week. The spread currently sits at Bengals -5.5 with a 49-point over/under.