Week 5 of the 2021 college football season did not disappoint, with nine top-25 teams eventually going down. Oregon notably lost to Stanford in overtime, making it the third time this year a team ranked No. 3 has lost, and the day ended with an upset on the island of Hawaii as Fresno State failed to dig themselves out of a six-turnover hole.

The college football Week 6 slate has four matchups between ranked teams, including the Red River Showdown in Dallas and a highly anticipated defensive battle between No. 4 Penn State and No. 3 Iowa.

Through five weeks, my picks stand at 18-20 for -0.57 units. Here are more spread, total, and moneyline picks for Week 6. All lines are from DraftKings Sportsbook.

Red River Classic. Red River Rivalry. Red River Shootout. Red River Showdown. Whatever this rivalry is called, it is always the same in the end — a competitive game between two of college football’s most historic programs.

But despite the 5-0 overall record to start 2021, Riley's squad has looked anything but pretty so far. They have topped their opponents by an average of 19.4 points over the first five weeks, but don't let that record fool you — that drops to 5.25 points when the 76-0 result against FCS program Western Carolina is taken out of the equation.

On the Texas side, quarterback Casey Thompson stumbled to a career-worst 42.4 PFF grade against TCU in Week 5 just one week after earning a career-high 92.9 grade against Texas Tech. And the concerning thing with this quarterback room is that the combined passer rating drops from 133.9 from a clean pocket to 48.4 when the pass rush gets home, which is bound to happen — and happen frequently — in Week 6.

Make no mistake, the 4-1 Longhorns have found their offense and their quarterback in the last few weeks, but they are going to be challenged against one of the best defenses in the Big 12.

Sooners quarterback Spencer Rattler has been far from perfect himself, leading some fans to chant his backup’s name, but he has improved from week to week and still enters Week 6 as the 18th-highest-graded quarterback in the FBS (86.6). Thompson's 78.7 PFF grade ranks 35th among that same group of players.

In the end, the advantage goes to the coach who knows a little about beating Texas. The Sooners defense is one of the best in the conference and will cause Thompson some problems. And despite Rattler’s relative struggles, this is the game that could help improve his slipping draft stock.

This game will be competitive and will not be decided until the fourth quarter, but the Sooners find a way to pull one out in the end. PFF Greenline is pro-Sooners, too, with an implied spread of -4.3. 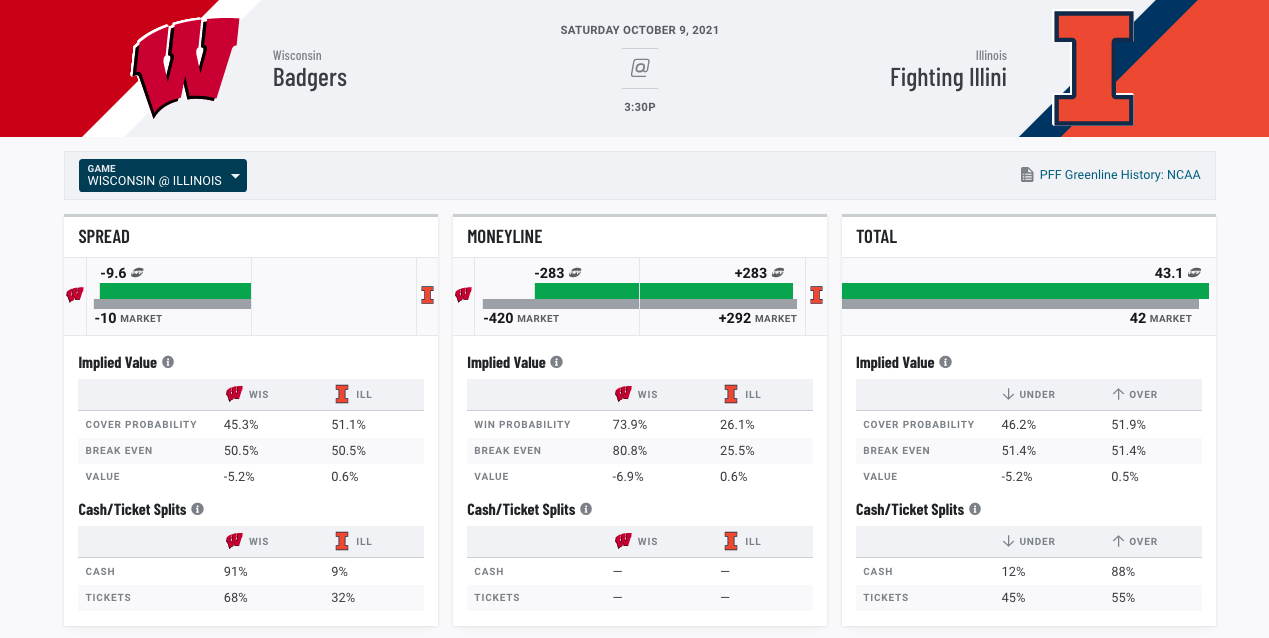 A handful of big-name offenses have struggled this year — Clemson, Texas A&M, Oklahoma State and Washington, to name a few — but Wisconsin's -0.297 expected points added (EPA) per play (129th among FBS teams) and 4.9 yards per play (109th) both rank last among those underperforming teams.

The preseason Big Ten West favorite currently sits at 1-3, with all three losses coming against teams ranked in the top 14. Quarterback Graham Mertz is questionable with a chest injury, but there are legitimate questions about how effective he would be if he were even fully healthy. Mertz has an unacceptable 10 turnover-worthy plays to just seven big-time throws, while backup Chase Wolf has two turnover-worthy plays and two big-time throws on 11 pass attempts.

Illinois does not fare much better on the offensive side of the football, but they have found two reliable running backs in Chase Brown and Joshua McCray. Brown has racked up 379 rushing yards at an average of 7.3 yards per carry, while McCray has accounted for 327 yards at 5.4 yards per carry. The problem is that they will be going against a Wisconsin defense that ranks 10th among all FBS units in team run-defense grade (87.7) and 11th in EPA allowed per rush attempt (-0.377).

Ten points to cover is just too many for a team that has yet to score more than 17 points against an FBS opponent and has shown to be inept in an essential aspect of football.

Oregon State vs. Washington State (under 59.5)

Who would have thought that the Oregon State Beavers would be leading the Pac-12 North entering October?

Oregon State quarterback Chance Nolan has thrown fewer than 20 passes in three consecutive games, but he has been remarkably effective on the ground, with nine touchdown passes and only three interceptions on 98 attempts.

That said, the running back duo of B.J. Baylor and Deshaun Fenwick has the Beavers going places. The No. 1 rushing offense in the Pac-12 has 38 explosive rushing plays of 10 or more yards to go with 15 rushing touchdowns. The Beavers also lead the Pac-12 in EPA per play at 0.176. 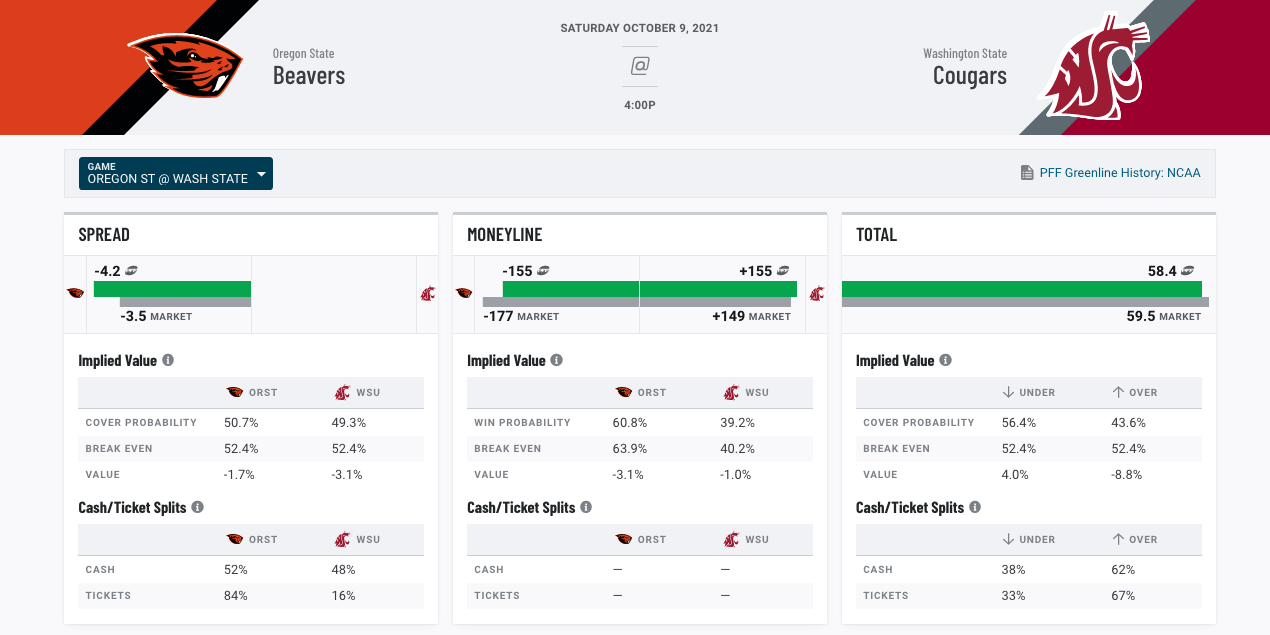 Washington State has had its fair share of offensive struggles in recent weeks, scoring 14, 13 and 21 points in their last three games. The Cougs have turned the ball over nine times in that span and have yet to exceed over 332 yards.

Jayden de Laura has been pedestrian as a quarterback while running back Max Borghi is not being utilized in the passing game. Borghi has four receptions in 2021 after recording 139 between 2018 and 2019.

The Cougar offense has generated a negative EPA per play that puts them 10th in the conference, right above Arizona and Colorado through five weeks. But while they are not scoring many touchdowns, the defense has been underappreciated and leads the Pac-12 in rushing yards allowed before contact (1.0) even if they do rank last in rushing yards allowed after contact (3.5). This defense has also managed to force 14 fumbles and has limited explosive passing plays to a little over 10% of the time.

Nolan is not dissecting opposing defenses through the air. Rather, he is an effective game manager and lets the running game open up the passing game. Baylor and Fenwick should have the ability to run against a team that does a good job containing rushers but struggles to bring them down.

Questions are surrounding Nick Rolovich and his future at Washington State, which brings distractions. On the football field, the offense has been lackluster with middling quarterback play. Both defenses are underappreciated and talented enough to keep the offenses in check.

The 4-1 UTEP Miners have already surpassed their preseason win total of three and will look to beat the Golden Eagles for their first five-win season since 2015, potentially opening the door for their first bowl game since 2014.

Wide receiver Jacob Cowing is one reason why the Miners have been so successful on offense, as his 585 receiving yards rank fifth in the FBS through five weeks. He ranks second among receivers with at least 20 targets in yards per reception (25.4) and yards per route run (4.85).

All eyes will be on Cowing and teammate Justin Garrett as they go against a Southern Miss secondary that has allowed a C-USA-worst 18.6% explosive pass percentage.

Southern Miss had to utilize its third-string quarterback last week because of injuries to the top two. Still, it doesn’t matter who is playing the position, as they all have one thing in common — Ty Keyes, Trey Lowe III and Jake Lange have combined for 12 turnover-worthy plays and just three big-time throws and have thrown more interceptions (9) than touchdowns (5). Making matters worse is the fact that the rushing attack averages fewer than three yards per carry and ranks 124th in yards per game.

With inconsistent quarterback play on an underwhelming Southern Miss team, there’s no wonder why PFF Greenline has the spread at nearly a point more than the market in favor of the Miners. This game will boil down to quarterback play and getting the ball to the receivers — advantage Miners.

The Roadrunners are undefeated at 5-0 while the Hilltoppers are 1-3, so this line does feel weird. That being said, this is the week to fade Western Kentucky as 3.5-point favorites.

Western Kentucky loves to pass the ball, and that is perfectly fine. Bailey Zappe has been operating the offense to the tune of 16 touchdowns, two interceptions and 1,712 passing yards. Jerreth Sterns has been his favorite target and is fourth in the FBS in yards after catch (300) despite an average depth of target of 6.5 yards. The Hilltoppers lead the country in passing yards per game and average almost 44 yards per game more than the second-leading passing offense.

Western Kentucky may have the passing game, but UTSA has Sincere McCormick. McCormick leads the country in rushing attempts (132), resulting in 541 yards and six touchdowns. He has recorded at least 23 carries in all but one game, including a 42-carry effort two weeks ago. He will expose a Western Kentucky run defense that ranks 11th-worst in the country in EPA allowed per play (0.106).

PFF Greenline sees value in taking the Roadrunners to win outright, as there is about a dime's difference between Greenline’s moneyline and the market moneyline. 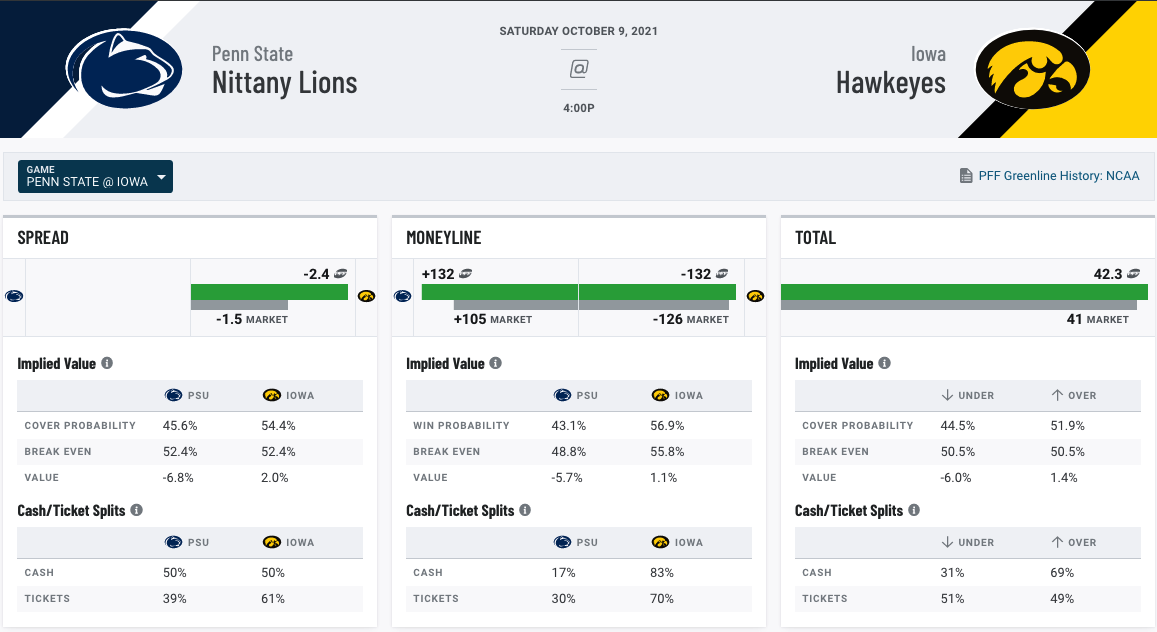 It only makes sense to have action on Saturday's best game. The Hawkeyes have home-field advantage and the crowd on their side. And even though it is not a night game, heading to Kinnick to take on what could be the best Hawkeye team since 2015 would be tough for most teams.

The Big Ten conference prides itself on its defense, and these two programs exemplify the defensive standard. The Iowa Hawkeyes have the best turnover margin in the country at +12 (16 gained, four lost), while Penn State has half that at +6 (nine gained, three lost). Only Georgia has a better EPA allowed per play mark than Iowa does (-0.357).

Iowa quarterback Spencer Petras has done a decent job of taking care of the ball, throwing just two turnover-worthy passes on 145 attempts so far, but Iowa averages only 4.8 yards per play on just under 69 plays per game and will need to find a way to exploit any possible advantage against the Penn State defense.

For the Nittany Lions, there is no doubt that the defense is a solid unit, but games against the likes of Wisconsin, Ball State, Villanova and Indiana do not have them truly tested.

Quarterback Sean Clifford has kept his number of turnover-worthy plays down to only two and has shown a willingness to test the deep ball. Having Jahan Dotson makes life easier for Clifford in the passing game, as Dotson leads the Big Ten in receptions (35) and receiving touchdowns (6) and opens up plays for Parker Washington and KeAndre Lambert-Smith, the other receivers in this offense.

PFF Greenline likes the small home favorites in the Iowa Hawkeyes. The game is set to be a defensive battle, but Iowa’s defense is on another level. The spread is on the right side of a key number of three that PFF Greenline believes should be closer to -3.5 than the market -2.5.

Bonus play of the week: Connecticut vs. Massachusetts (Moneyline +135)

How far is the margin between two of the worst teams in all of college football? UMass field PFF’s worst-graded offense and defense. Meanwhile, Connecticut may be without starting quarterback Tyler Phommachanh, who suffered a leg injury against Vanderbilt. Since 2019, both these teams are a combined 3-36 entering this game. If you are betting on this game, you are a true college football degenerate.