• Bet U 49.5 total points (-110 BetMGM): Both PFF model approaches like under — which looks like the best betting spot in the game market.

• Let’s dive into the Monday-Night matchup between the Minnesota Vikings and Philadelphia Eagles (-3, 49.5).

• After dominating performances by both teams in Week 1: The spread hasn’t budged from its initial release. Our prediction models are split, with the bottoms-up approach showing the Vikings as slightly undervalued, whereas the top-down approach sees this game as closer to a -3 spread. 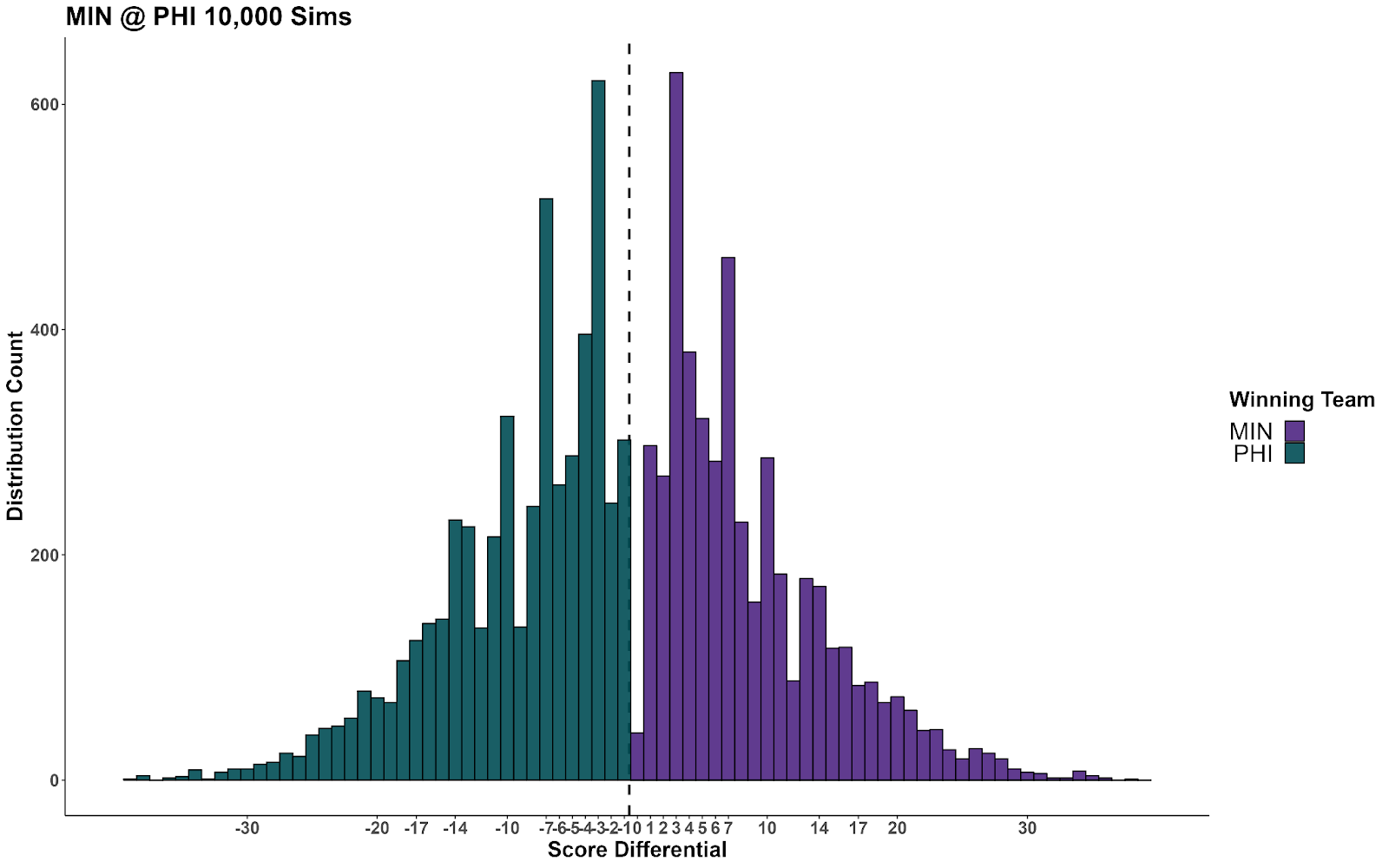 • PFF Greenline gives high value to the Eagles: And anything short of a field goal spread looks like value on the slight home favorite. Kirk Cousins and the Vikings could really be world-beaters, but they will have to show it for a second straight week before our models fully buy into their emergence as legitimate contenders in the NFC. This game is a prove-it spot for both clubs, making it one of if not the most enticing matchups of Week 2.

• One area both models point toward is a defensive struggle: After opening at 47.5, this spread jumped 1.5 points through the key number 48, now sitting on another key number in 49. Both model approaches like the under in this matchup — which looks like the best spot to bet if interested in some game market action. 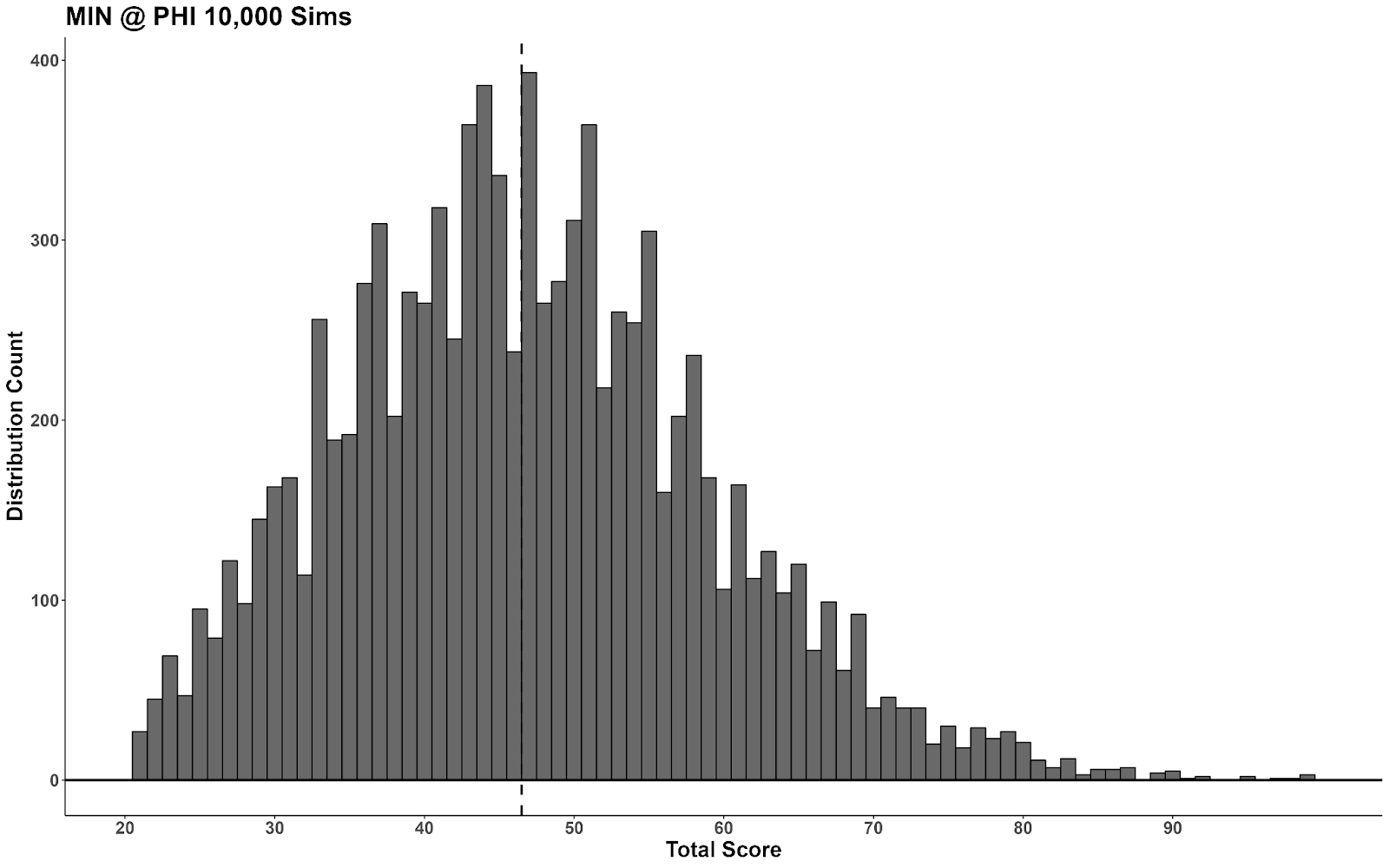 • Justin Jefferson is unfadeable at this stage in his career: It looks like he could emerge as the most valuable non-quarterback in the NFL by the end of the season. Jefferson was unrecoverable against the Packers in Week 1, and with Kevin O’Connell manufacturing mismatches for him, should be in line for a repeat performance in Week 2.

• Philadelphia is league-average based on PFF opponent-adjusted grade: And the Eagles lack a bonafide shut-down cornerback like Green Bay's Jaire Alexander. The Eagles were fortunate to lead throughout in Detroit last week, resulting in a high-percentage of quarter coverage played, but they may not have that same luxury in Week 2. Even if they are ahead early, this just means more positive game script for Jefferson.

• Pressing on the under: Especially when everything points that direction, is one of the easiest ways to win same-game parlays. Taking under the 49-point total, there are a number of player props that fit in and show value based on that outcome. One of the most obvious is Adam Thielen to go under his receiving-yardage prop. Our modeling already believes this to be the Justin Jefferson show, as Thielen continues to take a backseat to the young star.

• K.J. Osborn also continues to emerge: Running a route on almost 70% of dropbacks last week, Osborn commanded the same number of targets as Thielen on fewer routes run. Thielen simply isn’t seeing enough opportunities downfield — he's operated underneath or on short-to- intermediate routes since the latter part of last season. If the game plays toward the under, Thielen is the safest bet to finish under his yardage prop.

• PFF’s play-by-play simulation sees correlation: In these events stronger than Caesars' current price. For a two-leg same game parlay of these events, Caesars pays out +231 — or 30.2% implied probability. Based on simulation results, this happens over 38% of the time.

• Folding in a final leg of Jalen Hurts Under 8.5 carries: It bumps up the payout dramatically, as Hurts had nine scrambles last week among his 17 total carries. But the Vikings must be ultra sensitive to their pass-rush lanes and containing Hurts in the pocket. If his scrambling numbers drop to average levels, Hurts will have a difficult time going over this inflated carry prop number.