Why a trade for Robert Quinn makes sense for Dallas

The Dallas Cowboys are pursuing edge defender Robert Quinn in a possible trade with the Dolphins, according to Tom Pelissero of NFL Network.

Last season, the Cowboys earned a team pass-rushing grade of 72.0, ranking 12th in the league, and while that number isn’t bad, the Cowboys know that getting after the opposing quarterback is one of the most important ingredients to winning in today’s NFL, so adding a pass rusher like Robert Quinn will only help.

In their divisional round loss to the Rams back in January, the Cowboys managed to pressure Jared Goff just five times; the Patriots – who dominated the Chargers’ high-powered offense in the divisional round – pressured Philip Rivers 29 times en route to victory. The point is, if the Cowboys hope to win games when it counts, they’ll need as many good pass rushers as they can get. 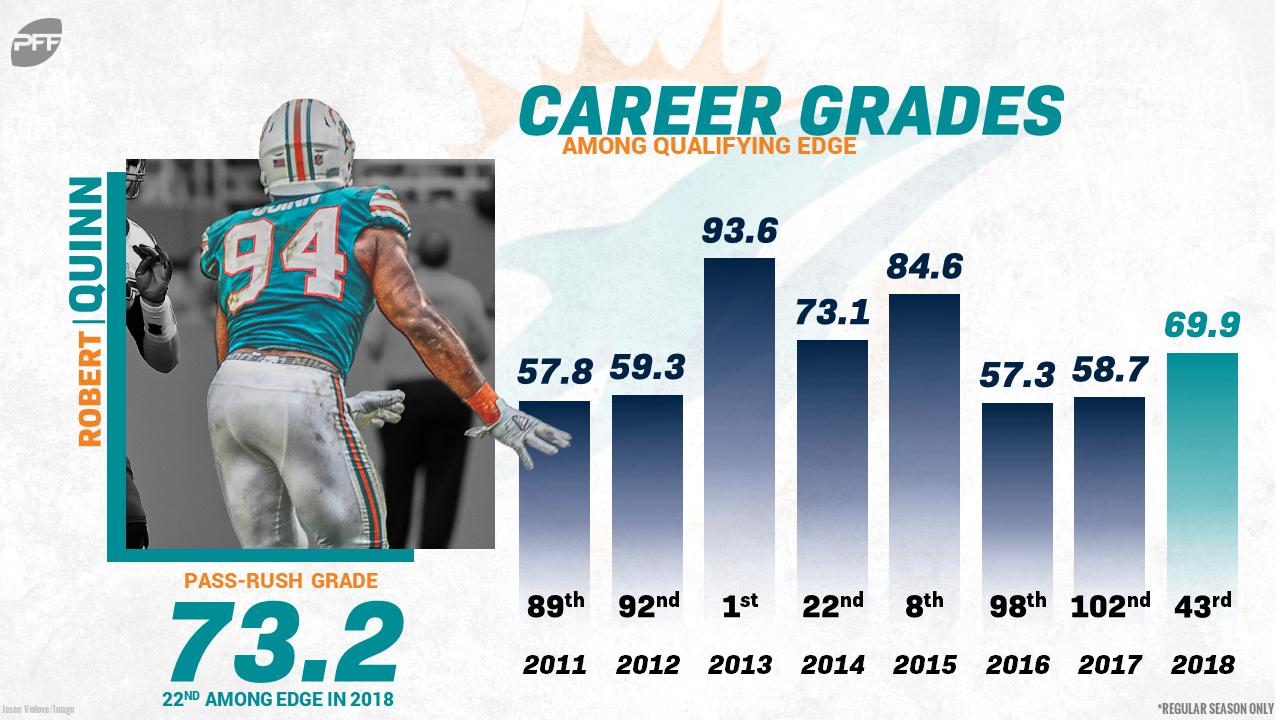 Enter Robert Quinn, who has had some great seasons throughout his time in the league, and even finished as the second-ranked player in the entire NFL in our top 101 back in 2014. He has had some down years, but Quinn’s ceiling is extremely high and he’s still only 29 years of age. He’s also coming off the fourth-best single-season overall grade (69.9) of his eight-year career.

Robert Quinn has beaten his man on 12.2% of his pass-rushing snaps in his career, which gives him the 32nd-best win-percentage out of 76 edge defenders with at least 2000 pass-rush snaps since 2006. That puts him ahead of guys like Julius Peppers, Robert Mathis, and even Jared Allen. No edge defender currently on the Cowboys roster has that kind of resume.

Adding Quinn would give the Cowboys a great duo of pass-rushers on the outside, which could help slow down the high-powered NFC offenses like the Rams and Saints come playoff time. Considering that the Cowboys had the 12th-best team pass-rush grade in the league last year; if the Cowboys can acquire Robert Quinn and the coaching staff can get the best version out of him, they just might have one of the best pass-rushing attacks in the NFL in 2019. Go get him, Cowboys.