Week 9 NFL Team of the Week 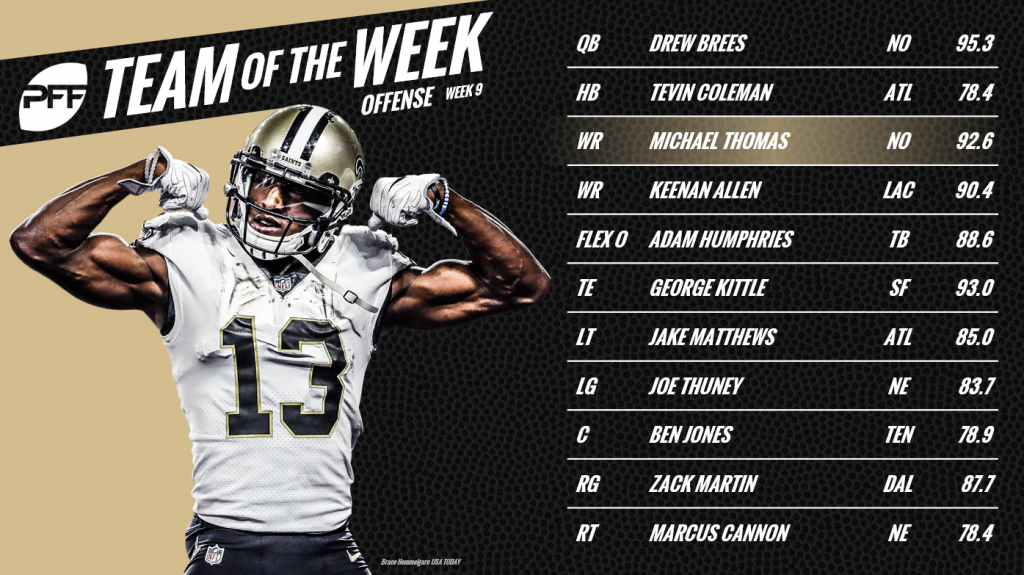 Brees was sublime once again for the Saints as they became the first team to take down the Rams this season. He found success all over the field, including going three-for-five for 100 yards on throws 20+ yards downfield, and eight-for-12 for 122 yards, with one touchdown on throws between 10 and 19 yards downfield.

Producing big plays on the ground and as a receiver, Coleman averaged 6.8 yards per carry in the Falcons win over the Redskins, including an average of 2.9 yards after contact per carry. In the passing game, he dropped one pass but caught another five for 68 yards and two touchdowns.

Thomas was already having an impressive performance before he put the game out of reach with his long touchdown late in the game. He led, or was tied for the lead among wide receivers this week in targets, receptions, yards, yards after the catch, drop rate and missed tackles forced.

Allen didn’t find the end zone, but he did average 20.7 yards per catch, with six receptions for 124 yards from 10 targets. Once again he didn’t drop a pass, and now has just one drop from 48 catchable targets this year.

Humphries was key to the Buccaneers' attempted comeback, catching all eight targets thrown his way for 82 yards and two touchdowns. He also forced two missed tackles on the day, taking him to six missed tackles forced over the past three weeks.

Matthews allowed a sack and a hurry from 44 pass-blocking snaps in the win over the Redskins, so he was far from perfect, but his best performance as a run-blocker this season sees him get the nod at left tackle in our Team of the Week.

Thuney was perfect in pass protection, with zero sacks, hits and hurries allowed from 40 pass-blocking snaps in the win over the Packers. He also delivered as a run-blocker, producing his best performance of the season so far across the board.

Jones makes the PFF Team of the Week for the second time this season, in no small part thanks to his work as a run-blocker in the win over the Cowboys. He comfortably handled Antwaun Woods at the line of scrimmage, including blocking him to the ground on 1st-and-10 with 7:43 left in the third quarter.

One of the top linemen in the league, Martin delivered his best performance of the season so far in the loss on Monday Night Football against the Titans. From 42 pass-blocking snaps, he allowed just one hurry and, as we've seen from him so routinely in the past, opened lanes as a run-blocker.

Cannon had some nice blocks in the running game, but it was his work in pass protection that sees him earn a spot here. From 40 snaps in pass protection, he didn’t allow a single sack, hit or hurry, giving him a perfect 100.0 pass-blocking efficiency rating, and he didn’t commit a penalty. 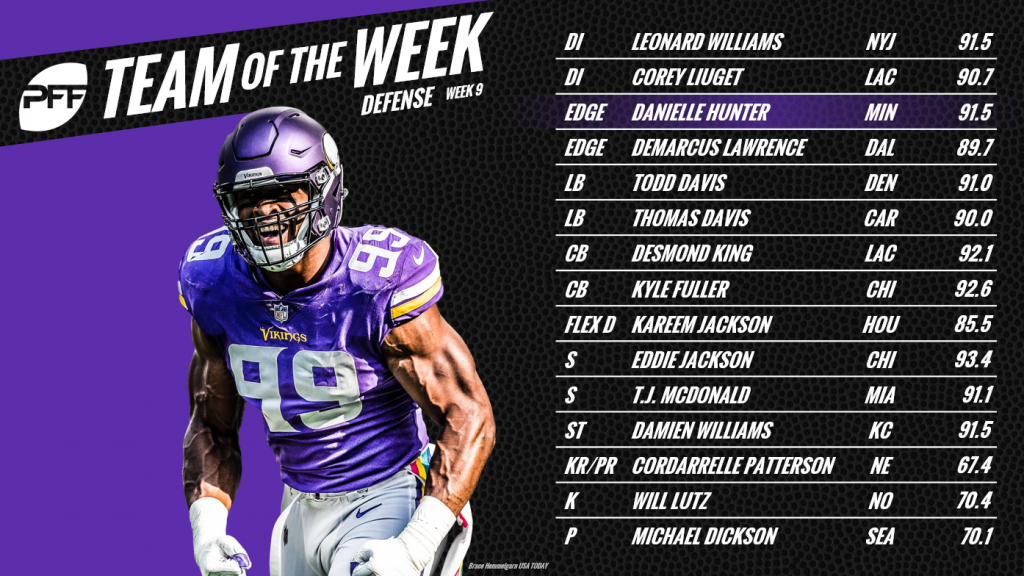 Hunter registered four sacks and two hurries off the edge, added another three tackles resulting in a defensive stop and found his way to the end zone on a fumble return after a failed Matthew Stafford pitch. That level of dominance will usually lead to a spot here on the Team of the Week.

Delivering by far his best performance of the season so far, Liuget dominated both as a pass-rusher and against the run. As an interior rusher, he picked up a hit and two hurries, while all five of his tackles on the day resulted in a defensive stop.

Lawrence played just 40 snaps in the Cowboys loss, and rushed the passer just 25 times, but was still able to rack up a sack and two hurries. The sack included a forced fumble, which set up Amari Cooper‘s first touchdown as a member of the Cowboys.

Davis was targeted four times in coverage in Sunday’s loss to the Houston Texans, allowing receptions of nine and 11 yards in the process. He would counter that with a pass breakup in coverage, two hurries as a blitzer and other five defensive stops.

Like his fellow Davis on the Team of the Week, Thomas Davis saw four targets in coverage. He allowed two receptions, but they went for a combined -4 yards, while four of his five tackles resulted in a defensive stop.

King was targeted four times in the win over the Seahawks, giving up just two receptions that went for a total of 16 yards. He had a pass breakup in coverage and also one of the key plays in the game, picking off quarterback Russell Wilson and returning it for a score. By the end of the game, he had allowed an NFL passer rating of just 20.8 on throws into his coverage.

Fuller was targeted eight times in the win over the Bills but allowed just one reception for zero yards in coverage on the day. With two pass breakups and an interception, he was a force to be reckoned with, allowing an NFL passer rating of 0.0 on throws into his coverage.

Jackson is the second Bears defensive back to make the PFF Team of the Week, thanks in no small part to the touchdown he scored in the win over the Bills. Targeted three times in primary coverage, he allowed three receptions, but they went for a total of just four yards.

McDonald had a big game against the run and pass, allowing just 21 yards from three receptions in coverage, while he also added an interception late in the fourth quarter to kill off any comeback hopes for the Jets.

Jackson saw 11 targets in coverage against the Broncos but allowed six receptions for just 54 yards. 18 of those yards came on one play, meaning that his other four receptions allowed went for an average of just 7.2 yards per catch.

Lutz attempted just one field goal on the day, but it came from over 50 yards, and he duly delivered to split the uprights. Elsewhere, he was automatic on six extra points in the Saints win over the Rams.

Dickson has been climbing our season grades after a slow start to the season and is now our fourth-highest graded punter in the NFL after a big performance against the Chargers. Four of his six punts landed inside the Chargers 20 yard line, with two going out of bounds, while he averaged a whopping 52.7 net yards per punt.

We’ve yet to see a touchdown on a kick or punt return this week, but Patterson showed his ability with some impressive work on Sunday Night Football against the Packers. On just two kick returns, he averaged a very healthy 32.0 yards per return.

Williams saw 16 snaps on special teams, seeing time with the kick return, kick coverage, punt return and punt coverage units. His key contribution on the day was a blocked punt midway through the third quarter.