The new league year is right around the corner and with it brings the opening of free agency. While everyone knows the big name free agents, the best use of free agency can often be to plug holes with quality starters that won’t command a premium. The 10 players below aren’t likely to break the bank this offseason, but all could be massive upgrades for needy teams.

It’s setting up to be a deep edge class, which makes Smith that much more appealing on the open market. The other edge-rusher out of Kentucky in 2015, the former fourth-rounder passed up Bud Dupree in a big way this season. Smith notched 60 pressures, the 17th most among edge defenders in the league. He doesn’t offer too much in the way of run defense, but hey, it’s 2019. 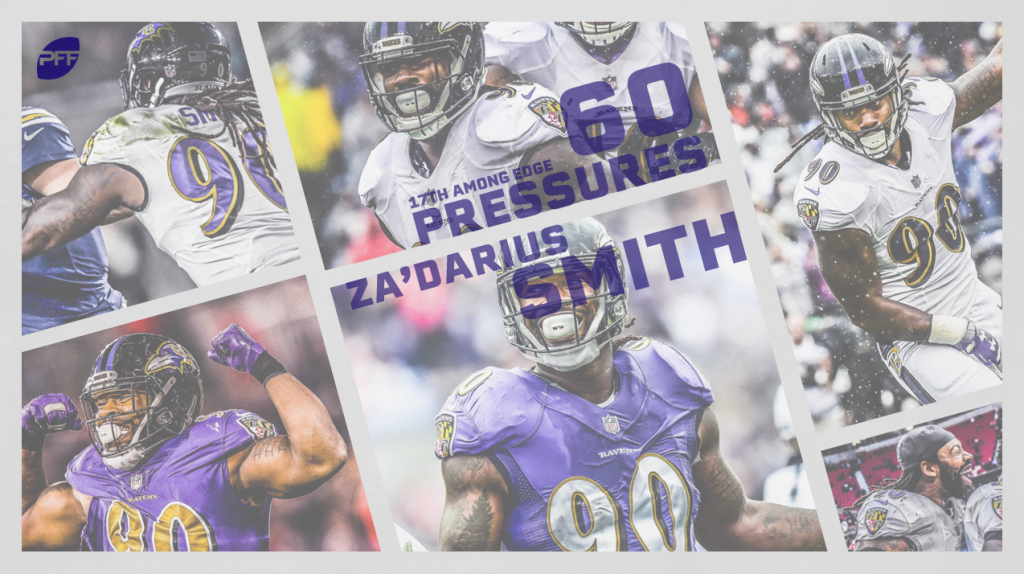 Former sixth-round centers who will turn 30 before the end of next season aren’t the sexiest of signings, but Paradis was the second-highest graded center in the NFL before ending up on IR. It was the second time in his career where he ranked among the top two players at his position. There are obvious question marks, and he likely is a center only, but he’d be an upgrade at that position for the majority of teams in the NFL.

Slot cornerbacks rarely get paid in free agency, but that doesn’t mean they’re not valuable. In fact, our data found that targeting the slot was actually more valuable than receivers split wide. Over the last two seasons, targeting Callahan in the slot has netted opposing quarterbacks a passer rating of 74.3 (2017) and 78.9 (2018) – both top-five figures each season.

Smith has two big things in his favor heading into free agency. The first is that he’s been able to produce while rarely coming off the field. He’s played over 2,300 snaps over the last three seasons and 834 this past year. The second is that he’s seen a distinct uptick in performance over the course of his career. This past season, his 76.9 overall grade was a career-high, and he’s increased his pressure totals each of the last two seasons to 53 in 2018.

When Mathieu was at his peak back in 2015, he was far more slot corner than safety despite his positional designation. Injuries took their toll in the years since, and it’s the reason why Arizona eventually parted ways last offseason. He took a prove it deal, and while Mathieu hasn’t been an ideal fit as a deep safety, he’s been very effective once again in the box. His 84.6 run defense grade is fourth among all safeties in the league. Still not even 27 years old, Mathieu’s career looks back on the upswing.

If you’ve never heard of Nsehke, don’t worry. The 33-year-old has played all of 1,295 snaps in his entire career. After a crazy journey from Texas State University-San Marcos all the way to the NFL, Nsekhe got stuck backing up one of the best pair of bookend tackles in the league out in Washington. When he has seen the field though, he’s been a more than competent pass protector. He earned a 76.4 pass-blocking grade in 249 passing snaps this season between tackle and guard.

Nelson was one of the bright spots in a much-maligned Chiefs secondary this season. He was targeted 113 times in the Chiefs man-heavy scheme – eight more than any other corner in the league. However, he only allowed a completion percentage of 53.1% and a passer rating of 76.8 in what was a career year.

After Barrett finally took over the starting gig and responded with a career-high 79.4 pass-rushing grade in 2017, the Broncos rewarded him by drafting his replacement with the fifth overall pick. Barrett played all of 276 snaps this past year, but that same player who racked up 43 pressures a season ago is still there.

Anderson looked like a steal of a third-round pick as a rookie before tearing his ACL halfway through the season. Upon his return, Anderson could never quite crack the starting lineup again in Indy, and he was dealt for pennies to the Jets this offseason where he quietly had a career year. His 48 pressures were the 12th-most of any interior player in the league.

While Glowinski is by no means on the level of Paradis in free agency, his grade this season suggests he’s turned the corner in a big way. In 601 snaps he was the 10th-highest graded guard during the regular season. While that’s a small sample size, he’d still quite clearly be a welcome addition for all the teams with liabilities at guard.