The list below, highlighted by soon-to-be 27-year-old back Le’Veon Bell, is compiled of several talented running backs set to test the open market this offseason.

Bell wants $17 million per year and north of $45 million in guarantees. Atlanta Falcons’ Tevin Coleman is likely eying a similar payday to the one current San Francisco 49ers running back Jerick McKinnon received last offseason (four years, $30 million). Bell, Coleman and several others that are good at their job – being running backs – will get overpaid when considering current positional value.

Running backs are replaceable in today’s NFL largely because rushing production is much more dependent on the blocking ahead rather the individual skill of the back. As such, investing significant resource (i.e. draft capital, cap space) can be costly even if it is indeed invested in a spectacular running back.

Teams eager to upgrade their backfields in free agency will pay (too much) for it from a return on investment perspective, but there certainly are upgrades to be had on this list. 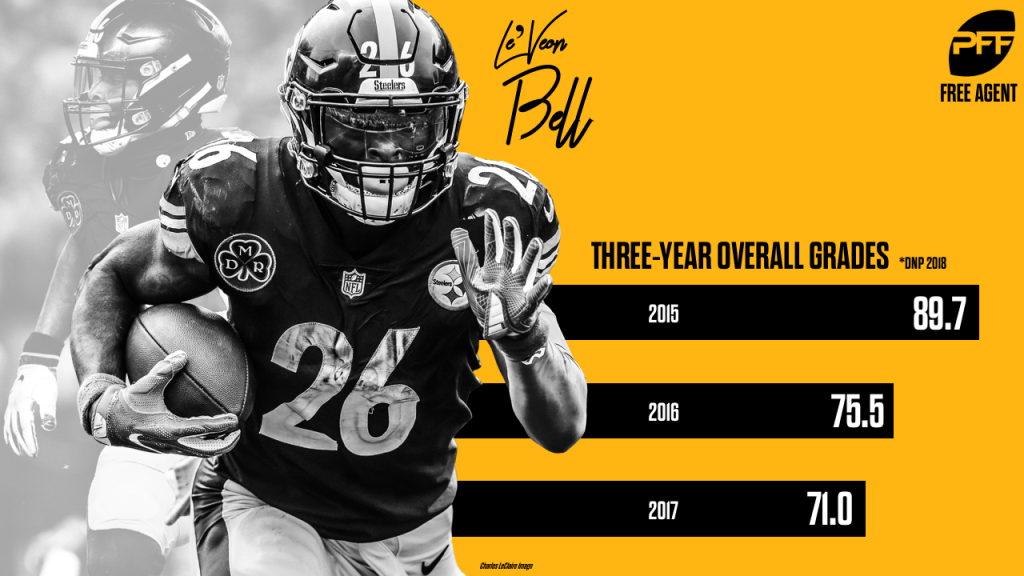 Bell’s reported asking price makes signing him a questionable investment, not a bad player. Though he did sit out all of 2018, Bell is still an arm and a leg better than any of the other pending unrestricted free agents.

Mark Ingram, who will turn 30 by the end of 2019, won’t have a multi-year contract pushed across his (agent’s) desk this offseason, but he’ll still have plenty of suitors eager to add a veteran presence to their backfield.

The former Heisman Trophy winner has earned overall grades above 70.0 in six of his eight seasons in the NFL, including his career-high 81.1 overall grade in 2018. He finished the regular season averaging an impressive 3.09 yards after contact per attempt and forced 24 missed tackles along the way. 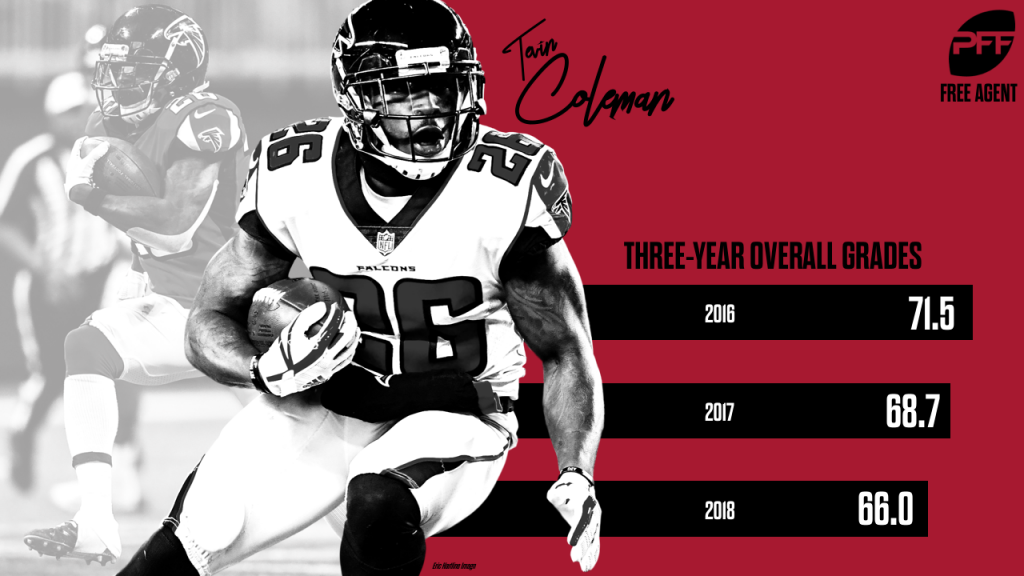 Turning 26 this offseason, Coleman brings youth potential into the mix along with much-needed versatility at the running back position, which is more than a lot of backs on this list have to offer. However, he still has done very little to stand out in the NFL. He recorded just three single-game grades above 75.0 this past season and finished the year with a 66.0 overall grade. He’s also yet to match his 85.9 receiving grade in 2016, earning 71.6 and 60.6 receiving grades in 2017 and 2018, respectively.

Expectations were high for then-Green Bay Packers running back Ty Montgomery after his 2016 season. He earned a 76.1 overall grade, averaged 4.42 yards after contact per attempt and forced 21 missed tackles across his 507 offensive snaps in 2016.

Though he hasn’t quite met said expectations in the two seasons after his breakout campaign, Montgomery (26) offers value as a versatile receiving threat out of the backfield. His 76.1 receiving grade from 2016-18 ranks 16th among the 34 backs with 500-plus routes run in said span, and his 1.45 yards per route run average ranks tied for 12th with Coleman. 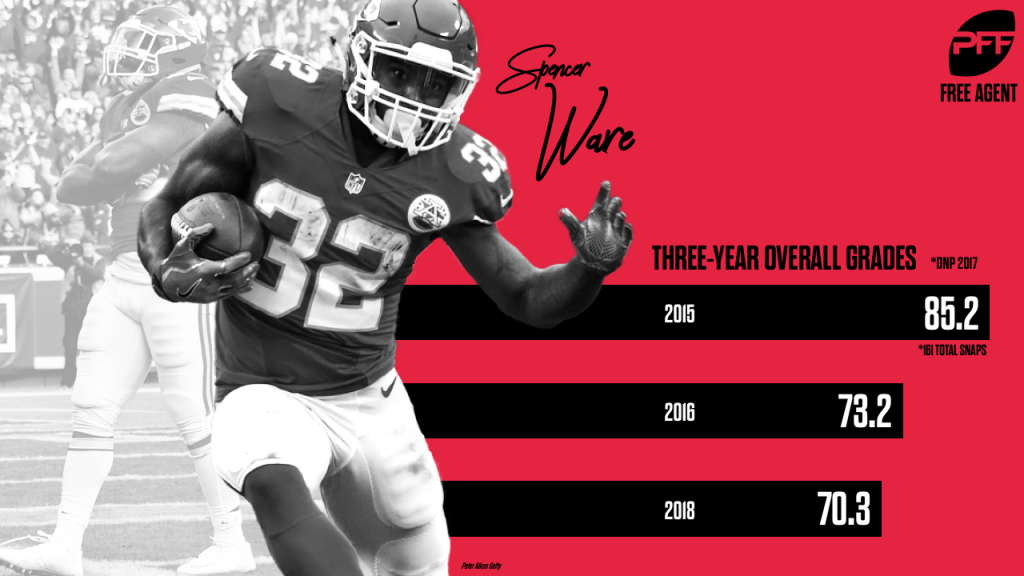 Spencer Ware has very quietly turned in overall grades above 70.0 in each of the past three seasons he’s played (2015-16, 2018), including an 86.1 overall grade across his 198 offensive snaps in 2015. The 27-year-old LSU product didn’t blow the doors off the NFL in his lone season as a feature back (2016), but he’s still flashed enough to warrant another shot at a significant role in one of the league’s offenses.

Tearing his ACL in October, Jay Ajayi may be forced into a one-year, prove-it deal before he signs anything long term despite entering free agency at just 25 years old. The former Boise State phenom has flashed high-end potential at various points in his career, most of which coming in his first two years with the Miami Dolphins.

Ajayi earned 75.2 and 80.3 overall grades in 2015 and 2016, respectively. He also averaged at least 3.04 yards after contact per carry in each of his first three seasons in the NFL and forced 40-plus missed tackles in 2016 and 2017. He’s a tackle-breaking machine with a knack for making plays after initial contact when healthy. 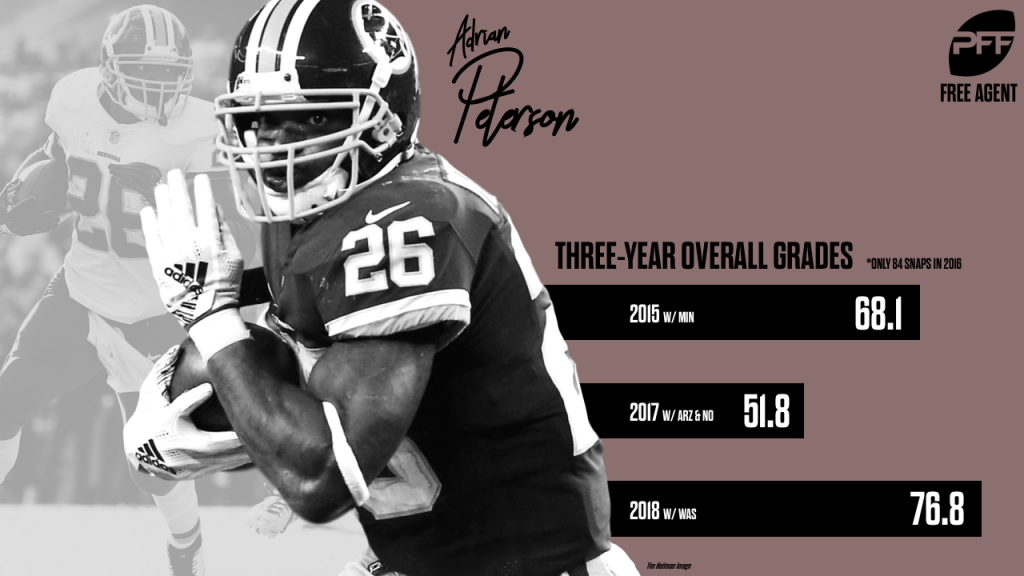 An oldie but goodie, Adrian Peterson proved he still has enough in the tank to play at a high level in the NFL at 33 years old this past season. He earned 67.0-plus single-game grades in each of the Washington Redskins’ final five games of the season, helping him to an impressive 76.8 overall grade on the year.

If, and it’s a big if, Marshawn Lynch opts against retirement and returns to the NFL, he, like Peterson, proved he can still be a game-wrecker in the NFL.

Before going down with injury in Week 6, Lynch forced 24 missed tackles (!!) and averaged 3.46 yards after contact per attempt. He still can do so much with so little, making him a valuable pick-up even at 32 years old.

Frank Gore, at 35 years young, earned a career-high 81.4 overall grade in 2018. He’s still got it, and Miami or any other NFL team would be lucky to have him as a depth piece if he chooses to play another season.

Stuck behind Leonard Fournette, T.J. Yeldon is in desperate need of a change of scenery. He hasn’t earned an overall grade above 70.0 since his rookie campaign, and he hasn’t had more than 130 carries in a single season since, either. He’s averaged just 2.40 yards after contact per attempt in his career but offers upside at just 25 years old and has proven he can have some success catching passes out of the backfield.