Put simply; it’s not a great year to need a long-term, high-performing solution at wide receiver in free agency. Even the best wideouts set to hit the open market have question marks, and very few have star potential along the boundary. Some of the older veterans can offer value in the slot while others still have untapped potential.

Without further ado, here’s the list of the top-10 wide receivers set to hit free agency this offseason.

[Editor’s Note: Subscribe to PFF’s ELITE – Annual or ELITE – Monthly subscriptions to access Premium Stats 2.0 throughout free agency to learn the ins and outs of every player your favorite team signs this offseason.] 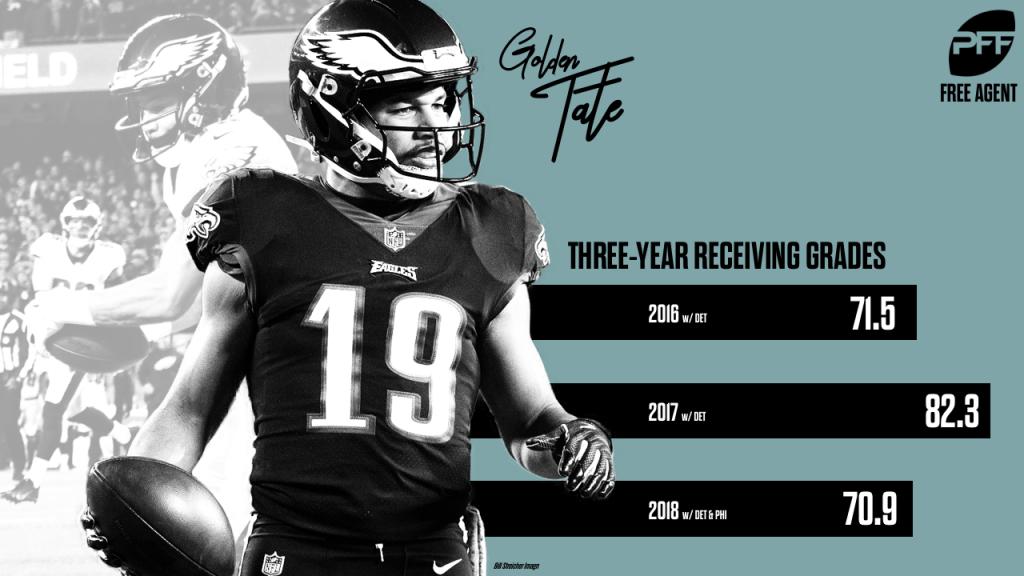 Turning 31 in August, Golden Tate is surely on the back-end of his NFL career, but he’s still a big-play threat with unparalleled consistency in making things happen after the catch. He has forced at least 20 missed tackles in each of the past seven seasons and has averaged 5.4-plus yards after the catch per reception in the same span.

Cast into a primary role in 2016, Los Angeles Chargers’ Tyrell Williams caught 69-of-111 targets for 1,059 yards and seven touchdowns en route to a 75.6 overall grade. Yet, Keenan Allen’s return from injury and the addition for first-round Clemson product Mike Williams pushed Williams into the backseat in 2017 and 2018. Listed at 6-foot-4, 205 pounds, the soon-to-be 27-year-old Williams should have ample suitors willing to bet on his potential in free agency.

Cole Beasley may not have the upside of Williams with his positional inflexibility and age (29), but he, like Tate, can offer immediate value to an offense as a primary slot receiver. He finished the 2018 season ranked 10th in yards per route run from the slot (1.46) despite falling out of favor in the Dallas Cowboys’ offense for much of the season. 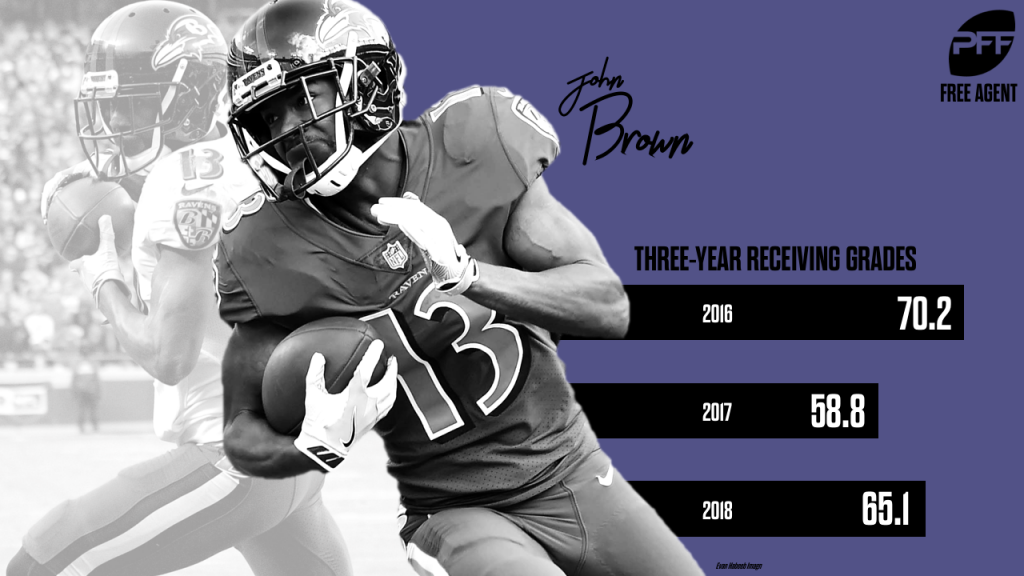 John Brown made some splash plays deep down the field with Joe Flacco under center for the Baltimore Ravens early in the season, but he failed to record more than 30 receiving yards in any game after Week 7. If given an opportunity to field deep targets in bunches, Brown can thrive in 2019 and beyond.

Adam Humphries earned a career-high 75.2 overall grade with the Tampa Bay Buccaneers in 2018. The 25-year-old Clemson product is trending up at the right time, which should lead to quite the payday in the offseason.

He may not be the game-changer he once was, but longtime Green Bay Packers receiver Randall Cobb still offers value as a proven veteran in this league. His career-low 60.2 overall grade is cause for concern, for sure, but a change of scenery may be just what the doctor ordered when it comes to getting at least some of the old Cobb back in action.

Signed to a one-year, prove-it deal as a free agent last offseason, Donte Moncrief failed to prove much with the Jacksonville Jaguars in 2018. He earned just a 62.3 overall grade across 815 offensive snaps and tied for 63rd in yards per route run (1.22) among qualifiers. Getting away from Blake Bortles will surely help Moncrief revive his career, but he still has a lot of catching up to do regardless of where he ends up. 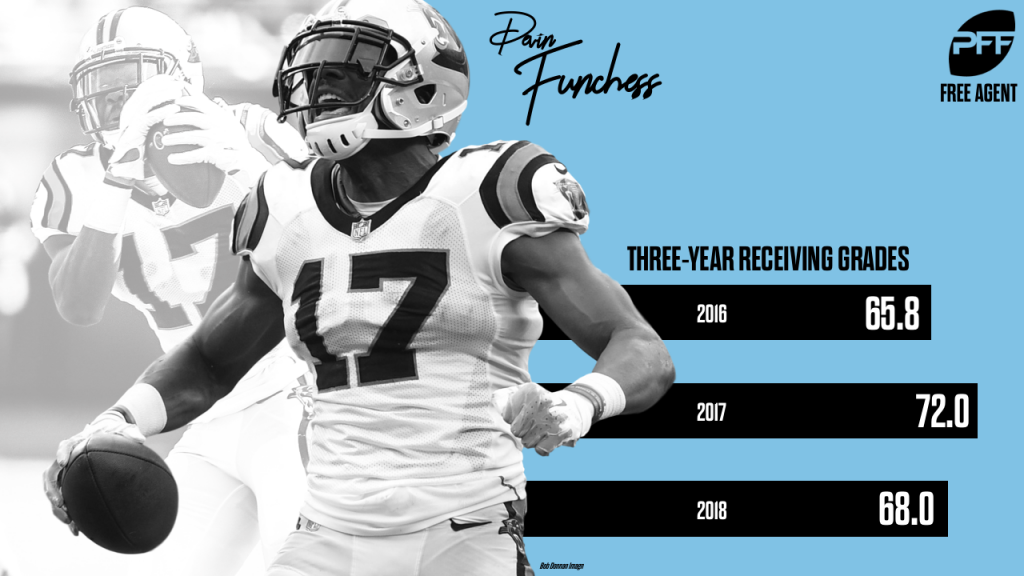 Devin Funchess’ 6-foot-4, 225-pound frame bodes well for his potential as an outside receiver in the NFL, but he’s failed to come close to it in his four years with the Carolina Panthers. He earned a career-high 74.7 overall grade as a rookie and topped 900 receiving yards in 2017, but drops combined with overall inconsistency have limited his year-to-year success.

Chris Hogan, otherwise known as 7-11 because he’s always open, has been closed for much of the 2018 season. He earned a career-low 56.7 overall grade this past year, failing to rise to the occasion as part of a Pats’ receiving corps in desperate need of playmakers outside of Julian Edelman. He’ll need to flip the script completely to warrant a significant role in 2019.

Dontrelle Inman came on late for the Indianapolis Colts towards the end of the regular season and in the team’s two postseason games. He caught 17-of-19 targets for 231 yards and three touchdowns in his final four appearances of the season and earned a season-high 89.8 overall grade in the Colts’ loss to the Kansas City Chiefs in the Divisional Round.