Tom Brady is playing his best football of PFF era

FOXBORO, MA - DECEMBER 04: Tom Brady #12 of the New England Patriots looks to pass during the game against the Los Angeles Rams at Gillette Stadium on December 4, 2016 in Foxboro, Massachusetts. (Photo by Adam Glanzman/Getty Images)

Tom Brady, at age 39, is arguably playing his sharpest brand of football we’ve ever seen over his 17-year career. Brady's current Pro Football Focus season grade of 96.5 is the highest mark the QB has earned in the PFF era (2006–2016 seasons). Monday night’s offensive showcase against the Ravens saw Brady at his best, and to the eye, left you wondering if he truly could be at his peak both psychically and mentally. On a throw-by-throw basis in every way measurable, the answer is yes.

In terms of his quickness within the pocket and arm strength, which, at times, looks stronger than ever, Brady has not slowed down a bit this season. It's quite telling that he’s thrown just two interceptions over a nine-game span this season to 22 touchdowns. He holds the lowest rate in the NFL in terms of turnover-worthy plays—where PFF takes into account dropped interceptions and passes thrown into harm’s way—at just 0.9 percent (turnover-worthy play/attempts).

Pick any of the key PFF quarterback category’s this season, and Brady either leads it, or is among the top-five, at the very least.

[Editor's note: All career stats noted below take only the 2006–2016 NFL seasons into consideration. Brady entered the league via the 2000 NFL draft.] 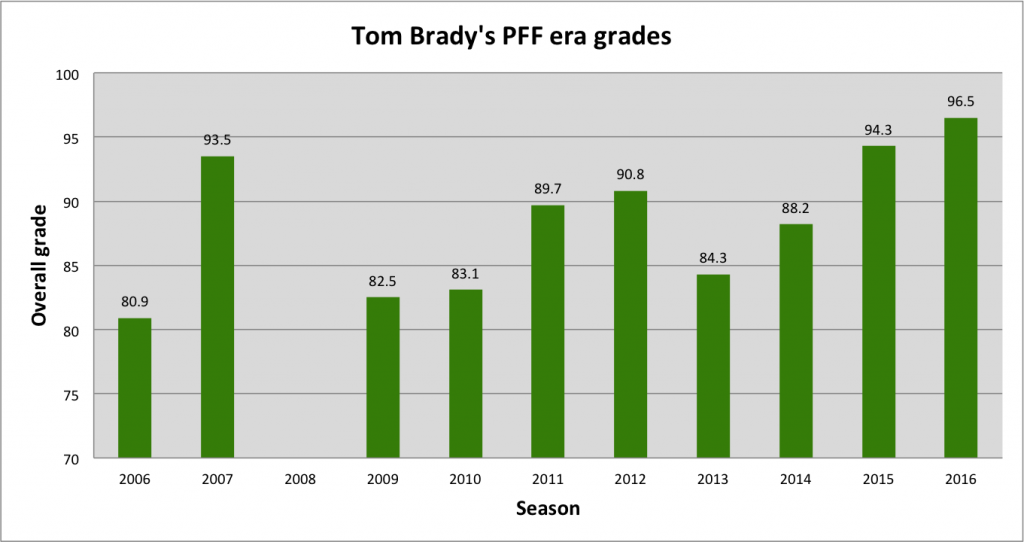 Brady’s offensive line doesn’t get enough credit, especially having played fairly well this season. Brady has been under pressure on 31 percent of his dropbacks, 3 percent lower than the league average. His current passer rating of 90.1 when pressured leads the NFL, and is the second-highest mark of his career behind last season's 97.6 mark. Brady’s instincts in the pocket are second to none; he has been exceptional in both aspects of feeling the pocket to evade pressure and throwing in the face of it, with his seven touchdowns tied for fourth-most in the league this season.

Brady and the Patriots' offense are stretching teams vertically very efficiently. The New England QB is posting the highest passer rating of his career (122.2) on throws traveling 20-plus yards in the air; that number currently sits him at fourth-best in the NFL. Brady has always had success on deep throws, but rated near the middle of the pack throughout his career on such attempts, with his next-highest passer rating coming in 2007, at 100.7. Whether it be seam throws, back-shoulder, or over-the-shoulder go-balls, he’s shown precise ball location and trajectory on every type of throw in 2016. The connection with free-agent addition Chris Hogan has been there in a big way—Hogan is tied for seventh in the NFL in deep-ball receptions this season, with nine, and is tied for fifth in yards on such catches, with 375. 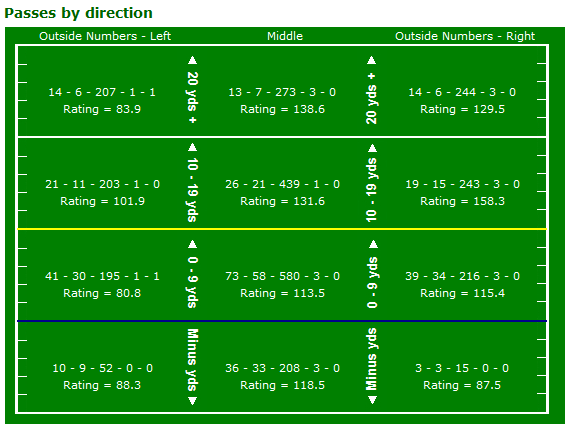 Brady has always been the best in the NFL at the pre-snap process of blitz recognition, changing protections to get the blitzing defenders blocked, and making them pay through the air when doing so. His passer rating against the blitz of 134.0 is tops in the league this season, and is a nearly 22 points higher than the next competitor. Brady has completed 68.5 percent of his passes versus the blitz, the fourth-best mark in the NFL. Impressively, Brady has only been sacked on three of his 97 dropbacks versus the blitz, the lowest amount in the NFL.

The Patriots have been committed to the running game behind LeGarrette Blunt, and have executed the ground attack pretty effectively, recording the seventh-most yards per game in the NFL this season, at 115.5, despite a middle-of-the-pack 4.0 average yards per rush. This has opened up some opportunities in the play-action passing game, helping Brady to record a 125.0 passer rating on play-action passes, the top mark in the league this season. He’s currently in the top five in both completion percentage (71.3) and yards per attempt (10.3) on such throws, as well.

Brady has dominated critical downs and the tight area of the field. His passer rating on third down this season is 133.0, first in the league. Whether you choose to play man or zone, Brady and the Patriots have the answers, as he has converted 50 percent of his third-down attempts, tied for first in the NFL.

Brady has been as good as usual in the red zone, specifically inside the 10, where he has thrown 11 touchdowns on his 24 attempts. His touchdown-to-attempts ratio is among the top five in the NFL currently, as he repeatedly makes tight-window throws. With TE Rob Gronkowski’s absence, the margin for error is obviously smaller. Game-planning and execution will need to be ramped up down the stretch to keep converting touchdowns in the red zone.

The loss of Gronkowski to injury—again—was undoubtedly a big blow for the Patriots' attack, but as Brady and the offense showed against the Ravens in Week 14, it may not slow them down too much. The league's best tight end is missed the most in the red zone and vertically down the seams of the defense, whether it be a single-high or split-safety look. The flexibility the Patriots have with personnel groupings within the offense have been on display in recent weeks, however. Without Gronkowski, snaps have been going to a sixth lineman at times to help in the running game and for added protection, as well as two-back sets or 20-personnel (two RBs, zero TEs, three WRs).

The Patriots field a week-to-week, game-plan-specific offense, both with their formations and added wrinkles in their passing schemes. One formation the Patriots have always utilized at a high rate—and very efficiently—is empty, no-back sets. On the season, out of empty sets, Brady is completing 66 percent of his passes for 540 yards (18.8 percent of his total yardage) and four touchdowns. An empty set has been called upon at some critical moments of games this season, and is a good formation to get the matchups New England would like to expose.

Despite missing four games this season due to suspension, Brady is now playing at the highest level in every facet of his game. If he can maintain this pace—and there's no indication that he cannot—the Patriots are likely primed for yet another Super Bowl run.